An Audubon man who was saved from a tree-climbing accident on Loucroft Road in Haddonfield should make ‘a full recovery,’ his family told firefighters Wednesday. 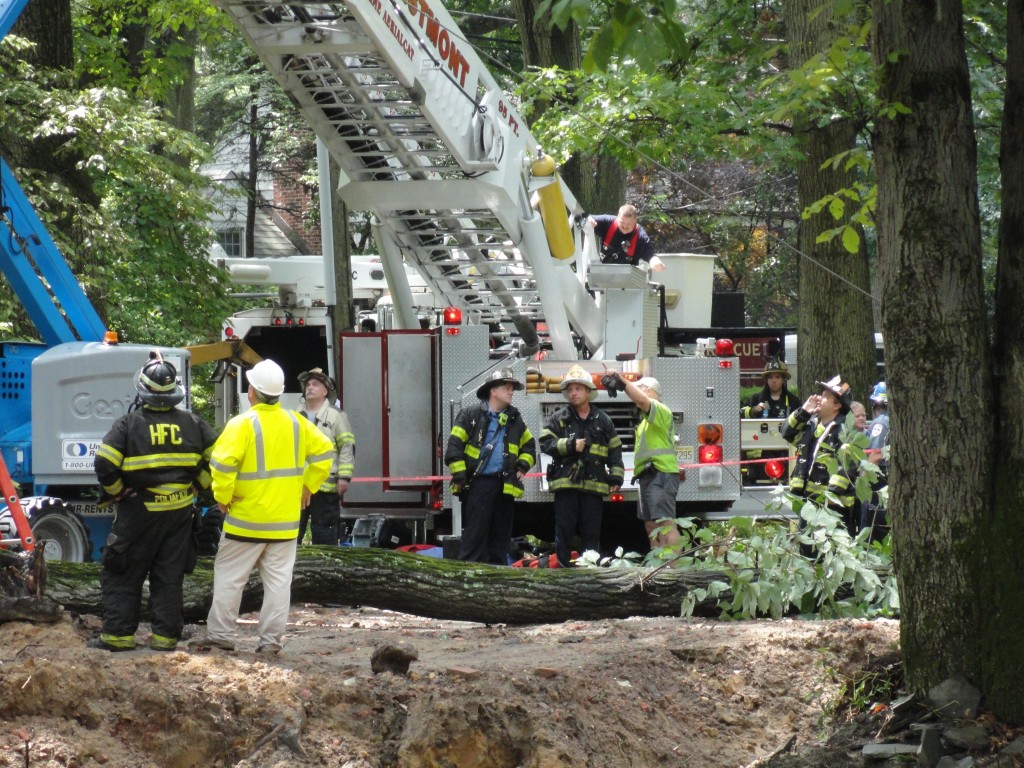 On Tuesday, first responders from Haddonfield, Westmont, Cherry Hill, Camden City, and Lawnside all pitched in to help save an Audubon man whose leg had been pinned between a tree and a Genie lift on Loucroft Road.

After two-plus hours, the man was eventually freed from his perch three stories up, and evacuated to Cooper Medical Center, accompanied by a surgical team.

And most of the time, that’s where the story would end for the multi-community team of men and women who worked so hard to save him.

But it wouldn’t stop them from wondering whether he would be okay.

Westmont Firefighter-EMT Barbara Hauber, who’d responded to the call on Tuesday, said the chatter before her next shift was all about the health of the man they’d rescued the day before.

“We were just talking about how we’re never going to find out what his condition was,” Hauber said. “Most of the time, we never hear from them again, and we never know.”

But to her surprise on Wednesday, an e-mail popped up in the fire company inbox from a family member of the victim. The note thanked the fire crews for their rescue efforts in saving a man with “three kids, four siblings, 16 nieces and nephews, and so many more.

“We are all immensely grateful,” it read, crediting the first responders with keeping safe not only the man, but his son and nephew, who were the other two crew members onsite.

And then, the best news:

“It will take a while but a full recovery is expected,” the note read. “‘Unbelievable’ was the term he used regarding your efforts to keep him from losing his leg.” 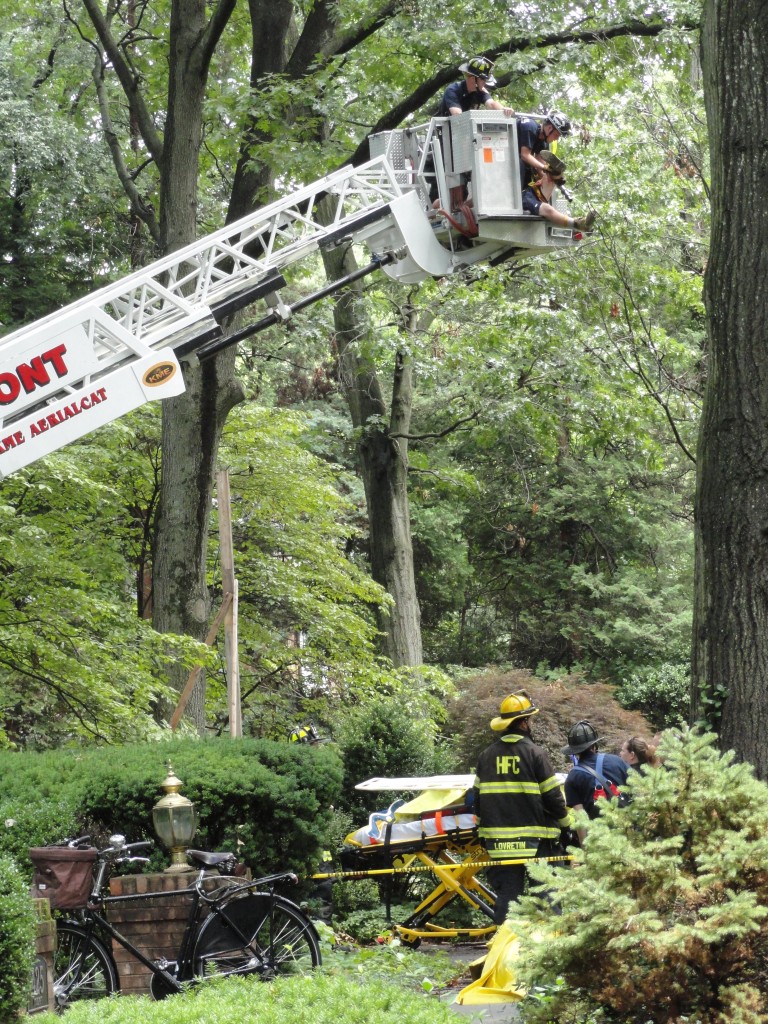 Hauber pointed out that the victim had aided his own cause considerably by supporting his weight throughout the rescue, and added that he refused pain medication so that he could remain conscious to do so.

After watching him labor through the ordeal, however, she was stunned to hear the news that he was expected to recover.

Although the department trains extensively for all manner of rescues, Hauber said Tuesday’s technical rescue is “not something that we typically train for.”

“You’re probably never going to run into this again, I think,” said Westmont Firefighter-EMT John Young, who operated the #5 ladder bucket while Lt. Jim Heckers worked its crane below.

“You know where you can place the truck and your limitations with the truck, but to deal with that actual scenario, that was a little different,” Young said.

After crews secured the Genie lift and the fallen tree limb that had pinned the man in place, Westmont Lt. Brad Medes climbed up, down, and back again to swap out a metal grinder for a hydraulically powered Hurst StrongArm. A few strategic cuts from Cherry Hill Firefighter Tim Moore freed the man, Young said, and he leaned into the bucket of the fire truck, where Heckers lowered them to safety.

“The tree stayed right where it was,” Young said. 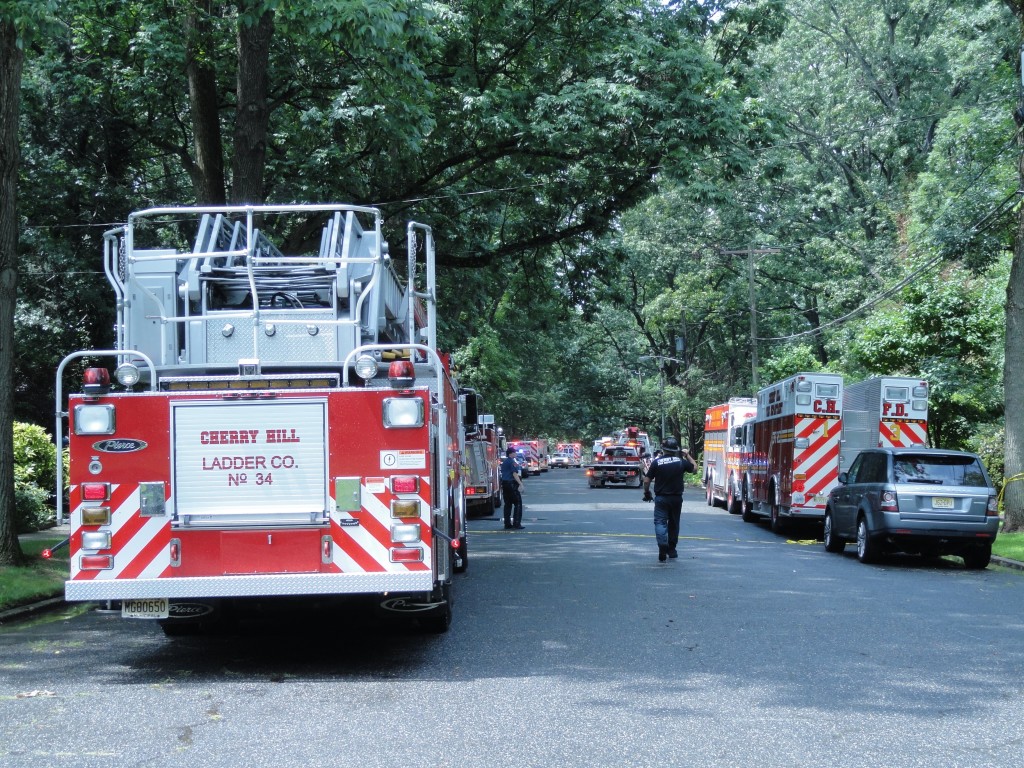 Sadly, the firefighters have responded to a number of tree-related service calls in Haddonfield, and have seen incidents that resolved in losses of both life and limb.

The borough, which is known for its storied shade tree canopy, certainly has had its fair share of accidents as a result, and the man who was rescued on Tuesday was not known to them as an arborist.

But more positively, the collaborative nature of the rescue illustrated the effects of departmental co-training in unusual conditions.

Mutual aid calls can send any of several professional and all-volunteer companies in the area responding to incidents regardless of geography. Camden and Cherry Hill firefighters are frequently dispatched in partnership for technical rescues like Tuesday’s and have developed a working familiarity.

Even individually, Hauber said, local fire companies will always debrief after a rescue to review and refine their approaches to the moment. The better the opportunities they have to learn the lessons of uncommon situations like the Loucroft Road rescue, the likelier they are to emerge from future rescues with happy outcomes, she said.

“Every day always brings something new out there,” Young added.