Children in the half-day program do not get regular allotted outdoor time unless a teacher provides it. Superintendent Mike Adams says district finances and instructional time are too stretched to mandate it. 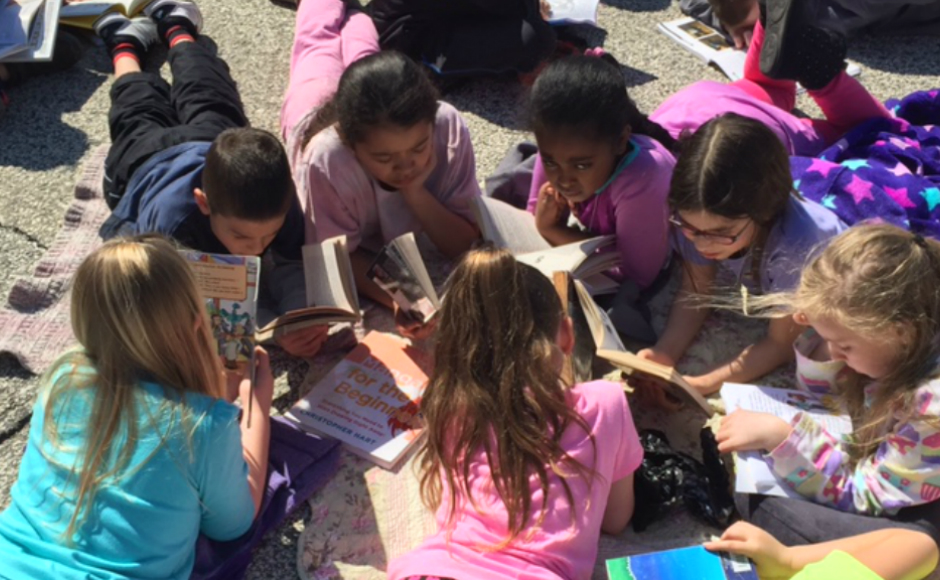 Students reading outside at Merchantville School.

According to leading medical and academic research, it’s an opportunity for child development that offers a critical payoff in terms of social and emotional learning.

And in the Haddon Heights school district, it’s not a guaranteed daily activity for kindergarteners.

When Cara and Michael Blair asked their son Ian’s kindergarten teacher whether the class would allow for more outside time, they were told it couldn’t be promised to them. So Michael Blair, a practicing pediatrician, and Cara Blair, a former schoolteacher, started digging into the issue.

“The more we looked into it, we understood how important this is in general for kindergarteners in the town,” said Dr. Blair.

In its 2013 policy statement, “The Crucial Role of Recess in School,” the American Academy of Pediatrics recommends 10-to-15-minute intervals of recess for every 40 to 50 minutes of learning to “maximize [the]cognitive benefits” of intense periods of instruction, particularly among elementary students.

“By breaking [the day] up, [students] retain more,” Dr. Blair said. “Their ability to focus and not fidget in their seats is improved when [children] have 15 minutes of on-their-own, free-choice play; even if they went to the playground and chatted with their friends for just 15 minutes.”

Yet “even with ample evidence of a whole-child benefit from recess,” Murray and Ramstetter point out that “significant external pressures, such as standardized cognitive testing mandated by educational reforms, have led some to view recess as time that would be better spent on academics.”

(In January, Gov. Chris Christie pocket-vetoed a bipartisan bill that would have mandated daily recess statewide in kindergarten through fifth grades, according to NJ.com.)

Cara Blair said the couple is sympathetic to the challenges of meeting curriculum goals while fostering child development. They just believe that the district could strike a better balance between the two.

“Where can we have a healthy conversation about this to explore what are the possibilities?” she said. “How can we make this work for Haddon Heights?”

The 2011 Kindergarten Implementation Guidelines from the New Jersey Department of Education recommend that “outdoor time for at least 30 minutes daily should be part of the curriculum,” with “severe weather conditions” as “the only exception” to that activity.

“Each segment of the kindergarten day, from arrival and class meeting, to reading, writing, and math experiences, to snack time and recess, serves a purpose in building the foundation for long-term school success. Kindergartners make meaning out of content when contexts for learning draw on their experience and immediate world. They develop a strong sense of purpose toward learning when teachers’ skillfully planned and executed experiences integrate content areas throughout every segment of the school day.”

The guidelines also note that “scheduled physical education classes are not considered a substitute for recess, the time for children to socialize and self-select their physical activities” and that recess “should include materials for making choices, plans, socializing, and collaborating in addition to using large muscles in gross motor play.”

“I just wanted [the district] to acknowledge the value of recess and appropriate developmental practices in kindergarten,” Cara Blair said. “I think other people in the decision-making process are looking at it as a way to get more instructional time.”

The Blairs even suggested that regular, unstructured recess could improve children’s behavior and ability to focus, therefore contributing to better academic performance and command of the material taught in class. Simply taking kids to the playground before or after school, or providing those physical activities outside of the hours of the school day, doesn’t integrate that opportunity.

“If we approached school more developmentally appropriately in kindergarten, you would have that buy-in that gets higher test scores,” Dr. Blair said. 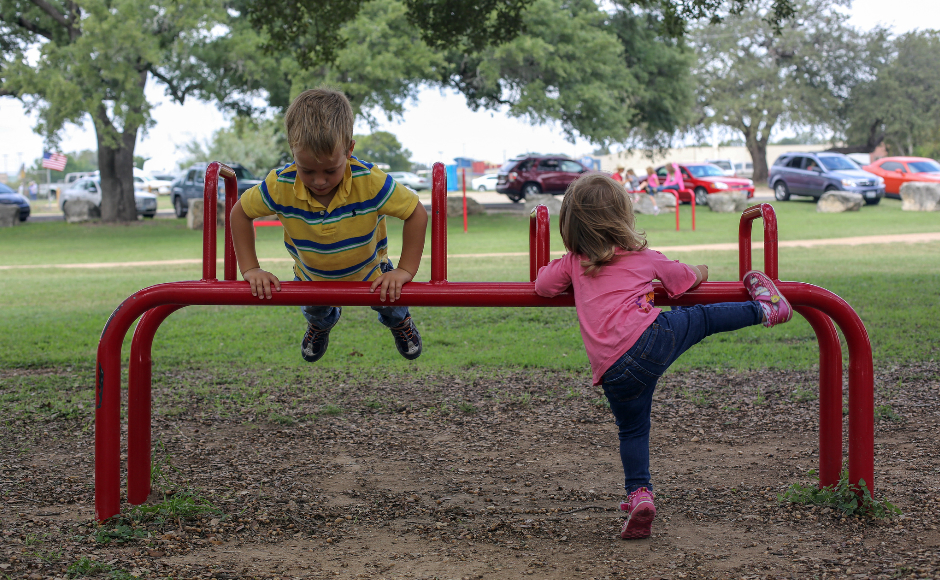 According to Haddon Heights Superintendent Mike Adams, although the district doesn’t mandate a daily recess period for kindergarten, teachers have the discretion to take their students outside for recess.

Adams said that the discussion raised by the Blairs helped clarify the district policy for staff “that we’re not mandating recess, but we’re not saying that you can’t take the kids out.

“I would assume in that scenario that [teachers have] met whatever they needed to meet for that particular day from a curricular standpoint or an instructional standpoint,” Adams said.

Haddon Heights operates four, half-day, kindergarten classes, which run from 8:45 to 11:25 a.m. In that two-hour-and-forty-minute period, there is no daily, mandatory recess. Adams said that to add an extra half-hour to the school day for those classes would cost an extra $25,700 annually, and to extend them to a full-day kindergarten program would add another $305,000 annually.

(For a sense of scope, school taxes are headed up 2 percent in the 2016 district budget, an increase that only will add some $234,000 in revenues. The district has already allocated $135,000 for the next three years towards a one-to-one Chromebook initiative, and board members point out that state aid has been essentially flat for the better part of a decade.)

“If the [Haddon Heights BOE finance] committee determines that future budgets won’t be affected by this change, the budget will be presented to the curriculum committee and they’ll go from there,” Adams said. “That doesn’t necessarily mean that we’ll have recess every day, but it means that some time would be allotted for recess if time was added.”

Adams also said that extending the day by a half-hour would add “some instructional time as well as some recess.” The kindergarten curriculum already includes movement activities tied to digital programs like Kidz Bop and Go Noodle, as well as special instruction in physical education, art, music, and Spanish, which didn’t exist a decade ago, he said.

“I’m not saying that’s recess, but it deals with social and emotional learning,” Adams said. “From a recess standpoint, which one may classify as non-structured play from a quasi-definition, there isn’t necessarily free play going on in the classrooms. But there are choices that students get to make from a social-emotional learning standpoint.”

Adams said that he agrees with the research provided by the Blairs on the importance of recess and exercise. He said that getting additional time into the kindergarten day is “an ongoing process.”

“I’m sure that the staff will use their discretion now that it’s been clarified overall better for them,” Adams said. “Now I’m looking at the other angle to this, where, depending upon the finance piece, we could get more instructional time and that recess as well.”

He reinforced the district structure for parent feedback as one that begins with individual school leadership teams, himself, and the board of education.

“Any time that a parent or guardian, community member, has a concern, we have procedures set so we can appropriately address their different situations,” Adams said.