The body did not grant a variance to let developers build a three-story, 38-unit apartment building on the outskirts of the central business district and without first-floor retail. 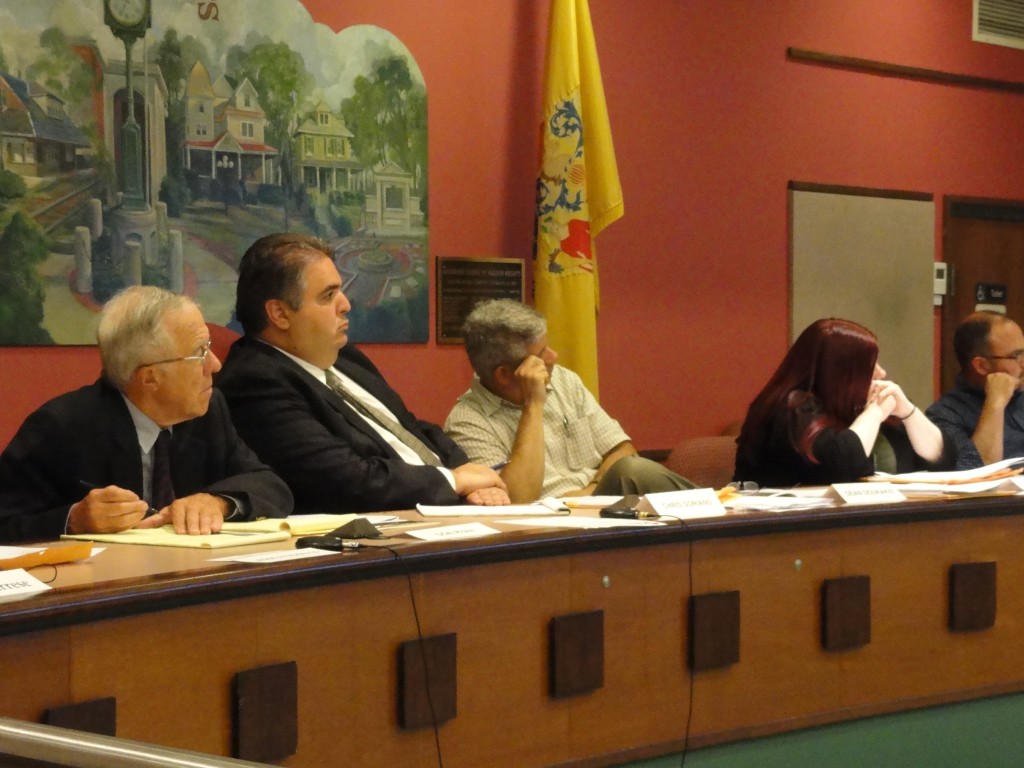 After nearly four hours of testimony Thursday, the Haddon Heights Planning Board denied a variance application from Buckingham Partners, LLC that would have turned an Atlantic Avenue warehouse complex into a three-story, 38-unit residential apartment building.

At issue for the body is that the property at 222 West Atlantic Avenue lies within the Haddon Heights central business district, and thus mandates first-floor retail.

Buckingham Partners sought an exception on the grounds that an all-residential project would have less of a traffic impact than a mixed-use development while supporting the existing downtown shops.

Mark Asselta of Brown and Connery, LLP, counsel for the applicants, argued that the site, which is surrounded by residential properties, is too far removed from the central business district for retail units to be successful. Citing the master plan for the area, which says that housing should be located “within the central business district to reinforce and stimulate business activity,” Asselta argued that the project represented “the perfect transition piece where you can segway into the businesses.”

“If you were going to condense the business district, this would be the property to do it,” he said. 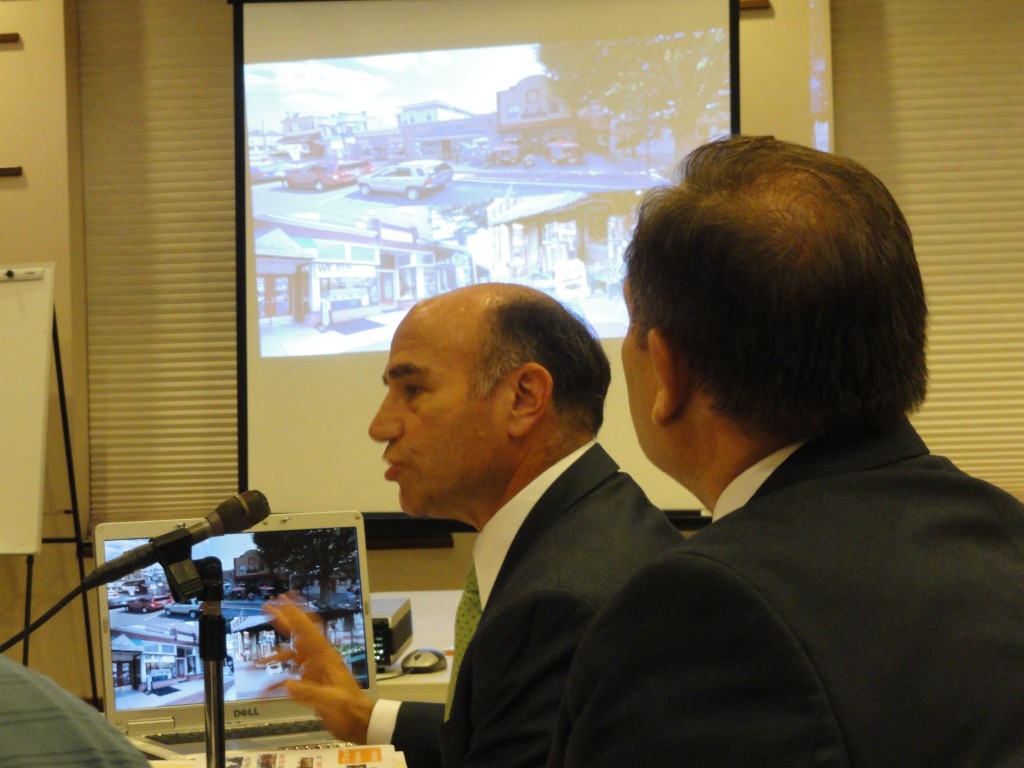 Residents, however, wondered whether adding a complex with 13 first-floor residential units would place an undue traffic burden on the central business district.

The developers contended that an all-residential development “would have less traffic flow and less trips” than a project with first-floor retail, Asselta said.

Engineer James Vena of the Atco-based Shropshire Associates testified that two-way traffic volumes along Atlantic Avenue ranged from 42 to 98 vehicles per hour during the peak morning and evening hours, or “approximately 1-2 cars per minute passing by the property during the peak hours of the day.”

Based upon generally accepted trip generation rates from the Institute of Transportation Engineers, the complex would produce an estimated 12 trips in the peak morning and 15 in the peak evening hours, Vena’s letter said.

But board member Jaclyn Parisi said that Vena’s study, which was conducted in late August, didn’t take into account pick-up and drop-off traffic generated by the nearby Atlantic Avenue School. Vena countered that, with business owners and customers in the mix, traffic associated with first-floor retail units would result in a higher volume of cars than a residential-only use.

“A commercial use on the first floor would be more intense,” Vena testified.

Angelo Alberto, the architect and planner on the project, told the board that the site, which is currently industrial, lies in the heart of residential area and does not offer “a strong retail use.”

“We 110-percent support that the ground floor on Station Avenue [should be] retail,” Alberto said. “It’s very important, as we say as planners, to have ‘no missing teeth.’”

At the same time, the architect identified 11 lots that are just off Station Avenue yet zoned within the central business district; only three are used for retail purposes.

“The real amenity [to renters]is Station Avenue,” he said.

In terms of design, Alberto said that although only conceptual artwork has been prepared for the site, the project managers want the property “to respond to the rhythms of the town,” constructed of comparable materials and at a height comparable to the surrounding buildings.

“From a planning and urban design perspective, we wanted to respect the character of the downtown,” he said. “We want to go to more glazing; things that contemporary homeowners like. Not modern but transitional between traditional and something more contemporary.”

Developer Robert Dale of Buckingham Partners described the site as “an outlier in the central business district,” and said it represented an opportunity for the district to transition from commercial to residential use.

Dale said that the project would support the existing downtown retail district while relying on smart growth principles.

“We can promote sustainable development, walkable communities, reduce those commuting times, and keep vibrant places like Haddon Heights,” he said.

Census data from 1970-2010 show that the population of Haddon Heights declined by 20 percent, Dale said. About 30 percent of the households in town are single-person, and half of those are seniors living on their own, he said.

“This is a wonderful opportunity to serve an aging population in your town and attract a younger professional; a single professional,” Dale told the board. “Maybe there’s only room for one downtown apartment building in this generation, and clearly the best opportunity to do that would be 222 West Atlantic.” 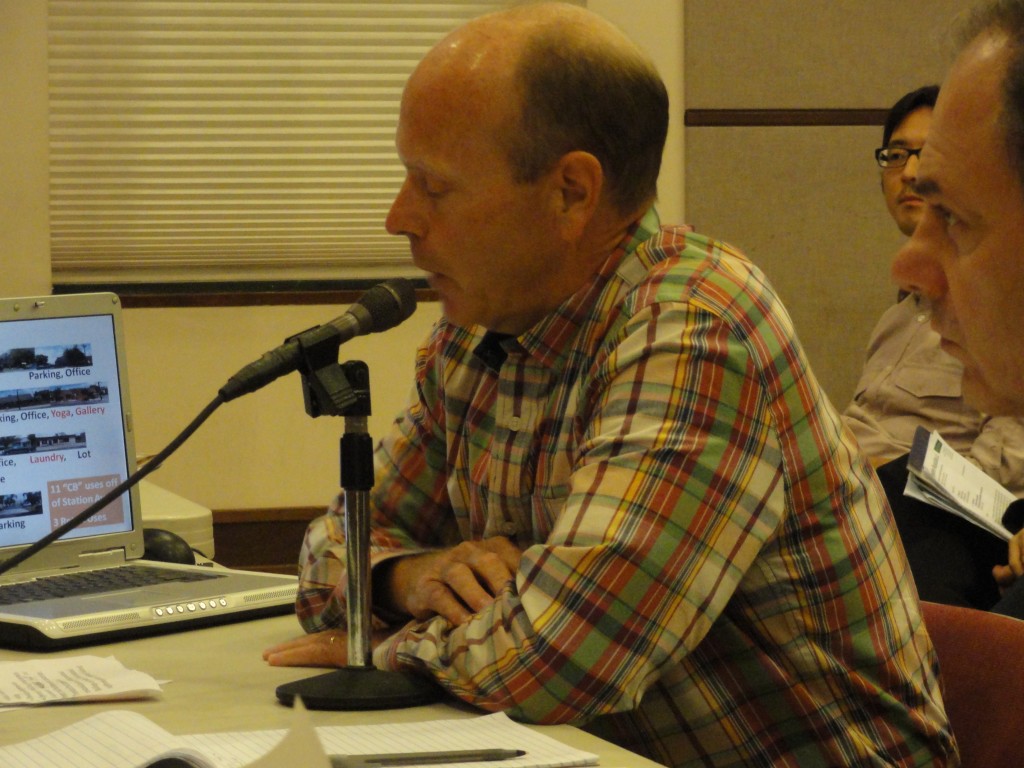 Access to public transportation is a key element to smart growth development, and although Haddon Heights was developed along a rail line, the borough currently lacks a PATCO Hi-Speedline station like its neighbors in Haddon Township, Haddonfield, and Collingswood.

Dale argued that a one-mile commute to the closest station isn’t prohibitive to transit-focused residents; moreover, he said, “there’s every reason to believe that eventually [the downtown rail station]will come back to life as [a]commuter rail line.

“It’s happened on the River Line,” he said; “there’s talk about it in Gloucester County along existing rail lines. I think it’s a tragedy that the older, colonial towns, which grew up around train lines, have lost that option.”

As an outlier along the downtown business district, Dale argued that developing the site with first-floor retail and not general commercial use requires pedestrians “to walk past hundreds of feet of non-retail” to shop there.

“I don’t believe it’s viable [as retail],” Dale said. “I don’t actually believe it’s appropriate. I’m quite sure that the retailers in town would tell you that that traffic is not stopping often enough for them to have the retail consumption that they would like to see.” 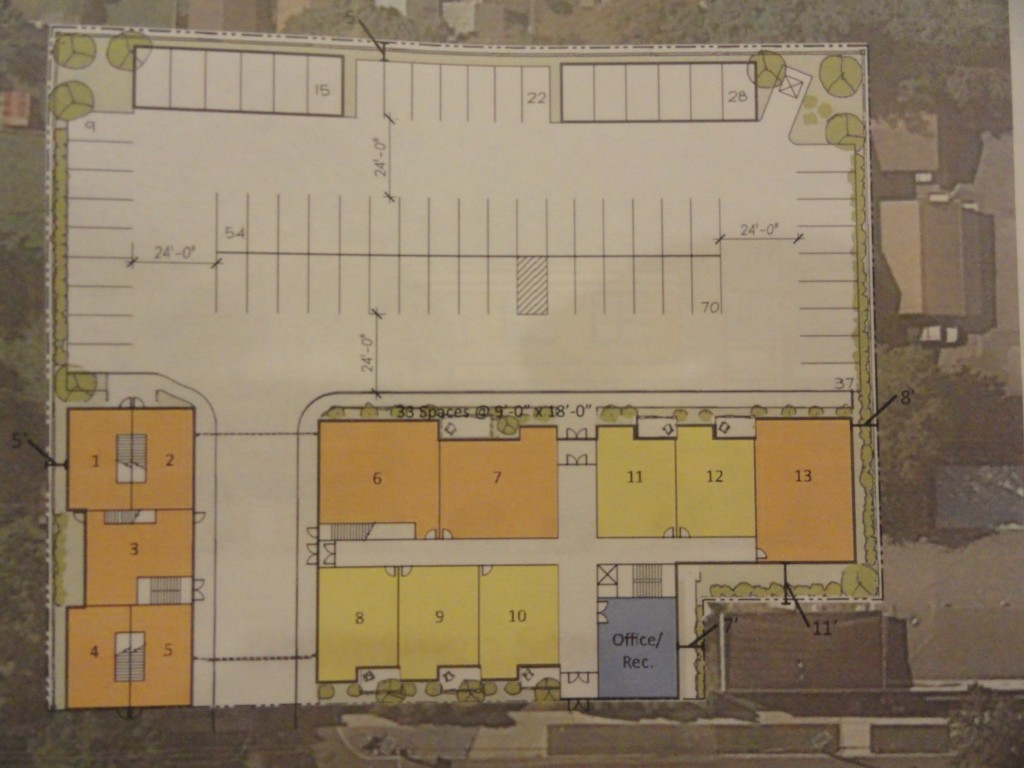 ‘Not well-suited to this location’

Despite acknowledging the limited potential of the current site for retail use, the board seemed to weigh more heavily the objections of residents who spoke against the variance application, and voted accordingly.

“This project is not well-suited to this location,” said board member Thomas Ferrese, whose motion to deny the variance was upheld by a 5-2 vote.

“We can do better for these people,” he said, indicating the crowd in the room.

Haddon Heights Police Chief and planning board member Richard Kinkler worried about the density of the project as well as the legacy of granting a variance that would stay with the lot for future owners.

Kinkler also expressed his doubts about the retail viability of the site in “any way, shape, or form.”

“The status quo is horrible,” Doukakis said. “I’d like to see something built there, but I don’t think 13 units makes a difference to me.”

After the meeting, Dale said he wasn’t sure what’s next for the project, or whether he had considered any alternative locations for it. One thing, at least, is certain, he said.

“It won’t be in Haddon Heights.”