Trending
You are at:Home»Government»Haddon Twp. Residents Push Back Against Revised Town Center Plan

Developers Fieldstone Associates told residents the original project was too costly to complete as intended. They’re answering back.

A proposed affordable housing settlement that could set the long-delayed Haddon Town Center redevelopment project in motion by giving up its retail component has met with some opposition from Haddon Township residents.

Jennifer Mustacchio, a funeral director who started an electronic petition calling on the local government to reject the latest proposal from developers Fieldstone Associates, of Doylestown, PA, said the township shouldn’t be forced into any action that abandons the original plan.

“I feel like the wool is being pulled over our eyes,” Mustacchio said. “We wanted the old plan and this new plan was not what we were promised.”

Superintendent Nancy Ward said that the district hasn’t yet crunched the numbers on how many students the The Towne Center at Haddon could add to the district, but that Edison and Stoy elementary schools would likely be affected by that project and the Albertson Village redevelopment. Credit: Delware Valley Smart Growth Alliance.

The petition points out that Haddon Township is “currently at a surplus of low-income housing” according to the New Jersey Council on Affordable Housing (COAH), and claims that the revised plan would push housing stock in town to one-third apartments.

Mustacchio cited a Philly.com study of COAH data that said Haddon Township is one of ten towns in the tri-county area to currently offer the largest overstock of affordable housing units. Others include Camden, Pennsauken, Lindenwold, and Gloucester City, which her petition singles out for mention.

But Mustacchio said her effort isn’t about comparing her community to any other; rather, it’s “about asking the commissioners to fight.”

“We’re against the problems introduced by this new plan.”

Signatories to her petition have named several concerns, including the potential impact of rental properties on the small, neighborhood school system; local traffic overflow; and the integrity of the downtown business district.

“Short-term profits for Fieldstone will leave the residents with many long-term, long-lasting problems,” wrote resident Scott Cooper, including drainage, traffic, and parking concerns.

“Please don’t think that just because you live a few blocks from this, that it doesn’t affect you,” Cooper wrote. “It will affect all of us.” 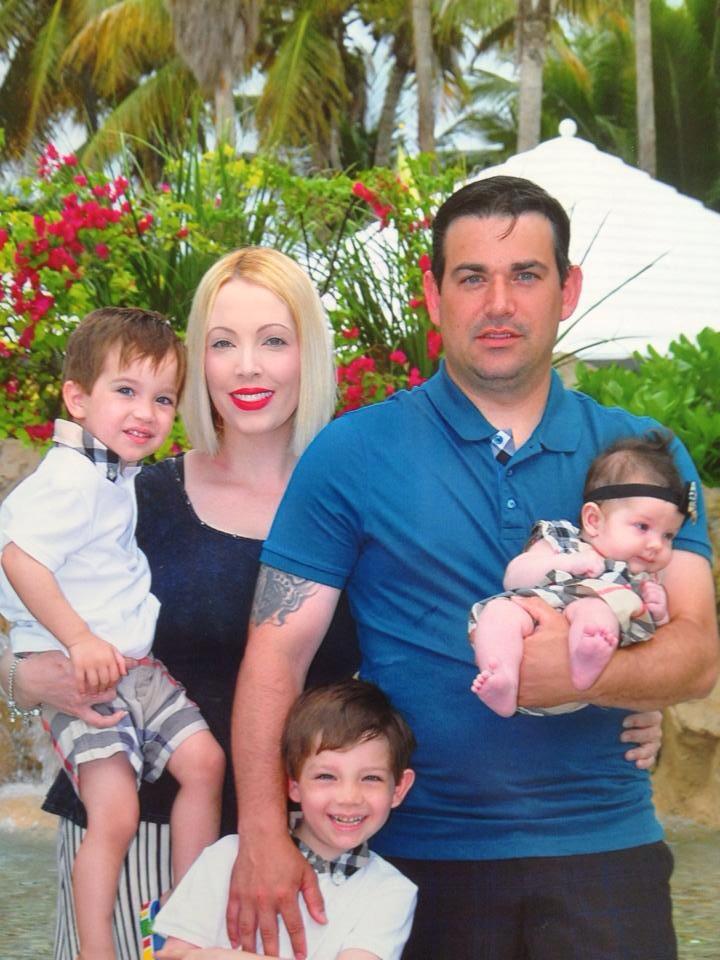 Parking is traditionally a secondary concern in transit-oriented development projects, which place an emphasis on creating walkable, downtown communities centered on public transit and nearby shopping.

The original plan for the Haddon Towne Center, as developed by architectural firm BartonPartners of Norristown, PA, included a proposed car and bike sharing programs as well as shared parking.

Such features are why the original design was recognized in 2006 by the Delaware Valley Smart Growth Alliance, a tri-state alliance of business, government, and non-profit organizations that publishes quarterly reviews of development projects that adhere to smart growth principles.

Criteria for which the Alliance recognizes projects include: location (“within an area targeted for growth”), mobility (“the needs to reduce reliance on the automobile”), urban design (“enhanc[ing]pedestrian culture”), environment (“green building technologies”), and community (“social context” and “tangible public benefits”).

The argument from Fieldstone is that the project was designed with the pre-2008 market conditions in mind; since that time, the developers have said the market for condominiums has bottomed out.

“I think there’s just a huge demand for rentals right now, and there has been,” Ciervo said. “There’s just more demand than supply. I think it makes more sense for an investor. You put up an apartment for rent, it’s going to rent pretty quickly.”

Not only that, Ciervo said, but the same downturn that burst the housing bubble also affected demand for retail properties. As the commercial market typically lags behind that of the residential market, he said, it could be hard to fill additional retail space.

“I think the retail climate’s changed a lot probably since these people were looking at this project,” Ciervo said.

“The prices on Haddon Avenue properties are not even close to what they were 10 to 12 years ago,” he said. “Retail spaces were just booming in these local towns. There just haven’t been that many spaces selling.”

Ciervo also disputed the notion that an increased population of renters would necessarily have a negative effect on the community. He pointed out that in nearby Collingswood, about one-quarter of the housing stock is rental properties, with more to come after the Ingerman development at the Lumberyard is completed.

“Being a business owner, maybe a shop, restaurant, stores on the avenue, would I welcome 200 more apartments a block down from me?” he said. “Yeah, I think so.

“If you’re getting fair market rents, I think those people there are going to definitely be popping into the Pour House and a few other places down the street,” Ciervo said. “Then you have a pool of buyers, potentially people who want to buy houses here.”

Ciervo also said that the larger nationwide real estate trend shows residents moving to avoid increased costs of living. Locally, he said, the same effect is observable just in the cost of apartments on the New Jersey side of the PATCO Speedline versus those in Philadelphia, which can command as much as $1,000 per month in additional rent.

If, as Fieldstone told the township planning board, the cost of constructing a concrete-and-steel parking garage would torpedo the financials of the project, Ciervo suggested the two sides could split the difference.

“If there’s going to be apartments, then put the garage in,” he said. “It could be a ratable. Let the town invest in it and let Fieldstone pay the taxes.” 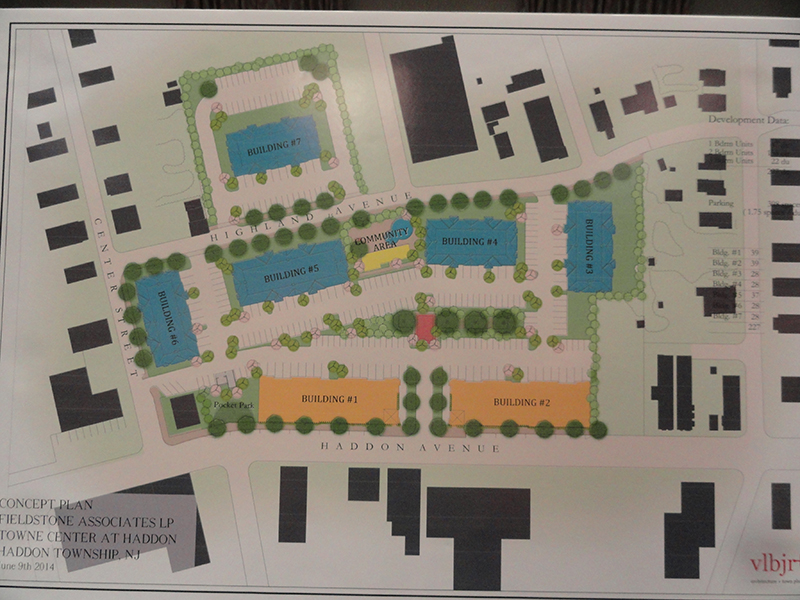 A revised plan for the Haddon Town Center redevelopment project no longer includes retail or condominium spaces after the threat of an affordable housing lawsuit. Credit: Matt Skoufalos.

‘We have more time than they do’

Haddon Township salon owner Douglas Kelly, who served on the economic development committee that drafted the original plan for the site, said he’s been “enjoying the wave of support for the original project.

“The land was never meant to be given over to one business,” Kelly said. “If you need to go to apartments, fine; you keep the retail.

“Their excuse was not enough parking [but]the builder never asked for a parking variance,” he said. “It’s a transit village. It’s so obvious to us that it should be mixed-use.”

Kelly said the real battle at the heart of the project is an ongoing discussion about “the identity of Haddon Township.

“The town in between Haddonfield and Collingswood is trying to find out who it is,” he said, and the petition is a reminder that the municipality is dealing from a position of strength.

“We have more time than they do,” Kelly said of the developers. “We’ve already been working at it for 12 years.

“I’ve been living here 51 years and I’ve never seen such community involvement,” he said. “It’s not a trend. This is a way to be.”