Remembrances poured in for the master craftsman, who will celebrate his 95th birthday in January. 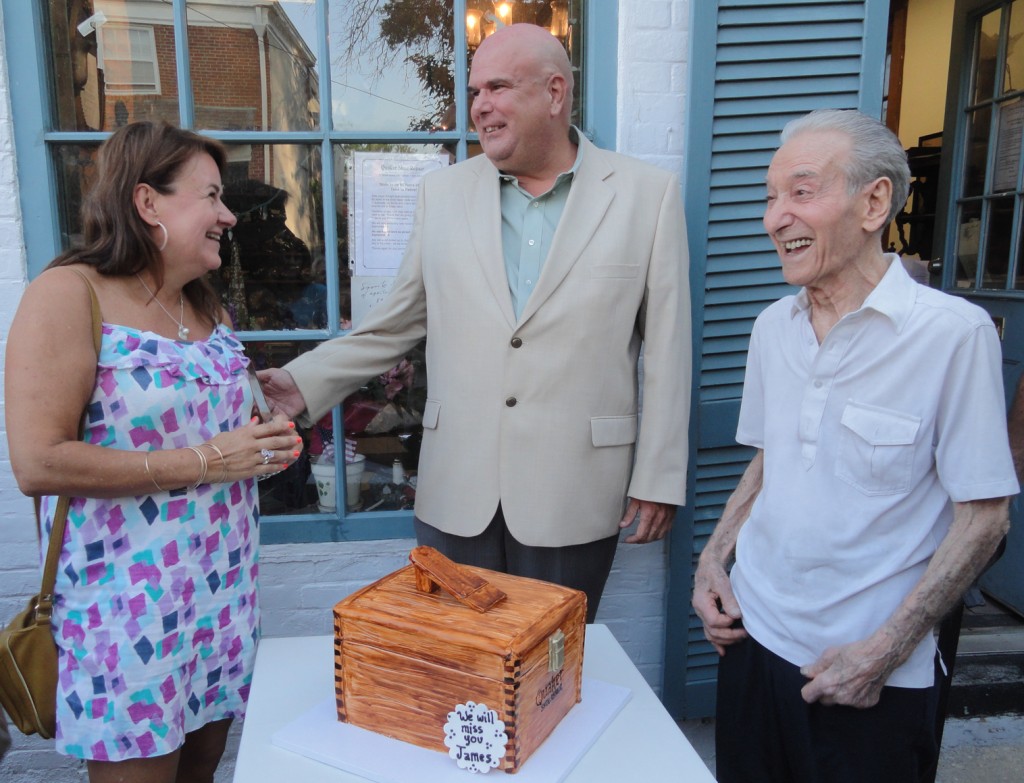 Retiring Haddonfield cobbler James D. Spinelli, a master tradesman who has plied his craft for 73 of the 94 years of his life, was feted by the borough that had enjoyed the constancy of his work for decades.

On Thursday, a crowd of well-wishers, family, and media congregated outside the blue-and-white Quaker Shoe Repair building to celebrate as borough leaders commemorated his many years of service to the community.

“My wife is home in mourning,” joked Commissioner Neal Rochford, who described his family as longtime Quaker Shoe Repair customers.

Rochford recalled Spinelli as “an impeccable gentleman” who had a “flair for taking something you didn’t think you were ever going to be able to wear again” and repairing it.

Today, he said, “Stuff’s designed to break and be thrown away instead of being fixed.”

Reading from a proclamation that named Spinelli’s Westmont and Haddonfield storefronts as “unique institutions beloved by many residents,” Haddonfield Mayor Jeffrey Kasko marveled at the longevity of the man’s career.

“It’s so awesome that he’s worked so many years and he did something he loved,” Kasko said. 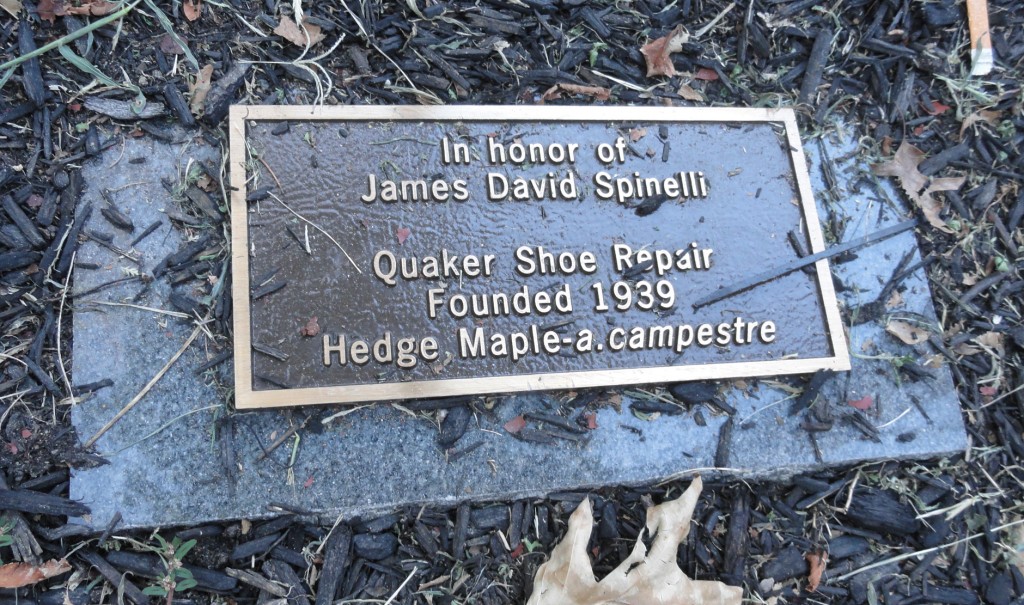 Spinelli was honored with a plaque and tree planting on the sidewalk outside his shop. Credit: Matt Skoufalos.

‘We’re really going to miss him’

Karla Heartsfield, who operates the nearby Howard Heartsfield Studio and Gallery on Tanner Street, spoke of Spinelli as an inspiration to other businesspeople in the shopping district.

“All week, I’ve been trying to talk him out of retiring,” Hearstfield said. “I thought I had convinced him.”

Aside from having an enviable work ethic, she said that Spinelli was just plain good for business.

“I moved across the street five years ago because he was here,” Heartsfield said. “Every 20 minutes, he’s got someone coming through his door.

“We’re really going to miss him,” she said. “Where do you find somebody like that?”

“I’d just come by sometimes for a chat and we’ll talk about everything from macrobiotics to quantum physics,” McPherson said.

Plus, she said, “I just love the smell of shoe polish, and this is one of the last places you can walk through that door and be assaulted by the smell.” 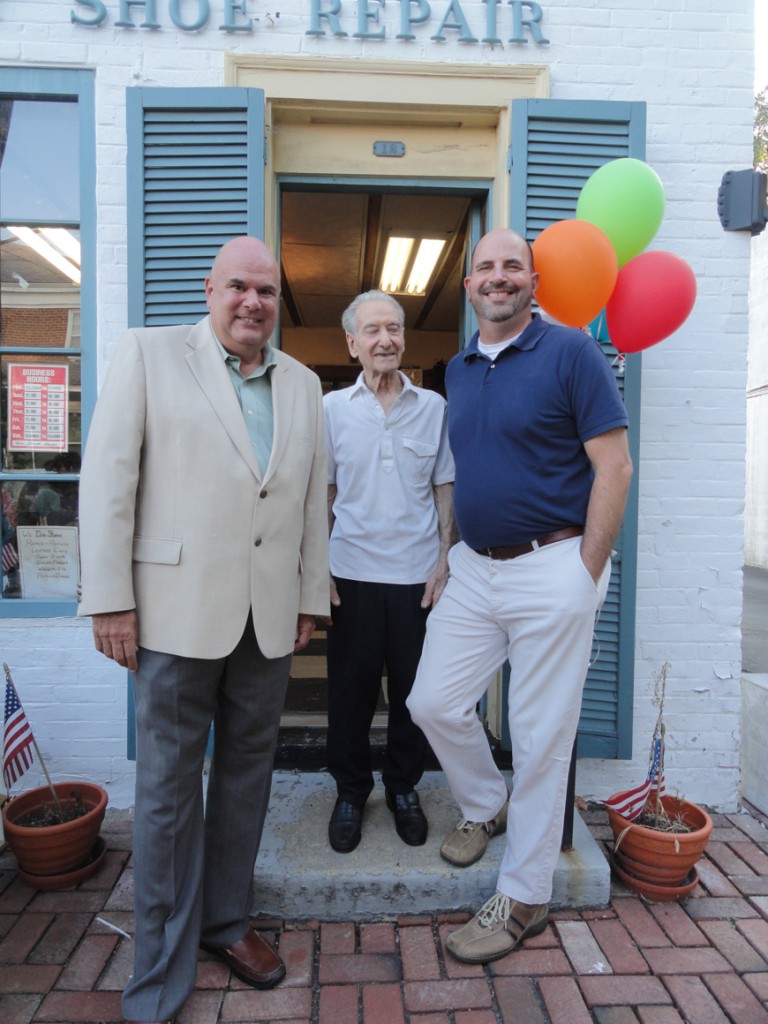 ‘Everything he did, he did for us’

In an earlier interview with NJ Pen, Spinelli said his singular motivation through the years was to provide for his family. His granddaughter, Lenore Spinelli of Mount Laurel, agreed.

“That’s what all of this was about,” she said. “He’s had to support himself and his family from a very young age.”

But Lenore Spinelli also pointed out that her grandfather’s “social network was the shop,” and that his warmth and kindness endeared him to all.

“He was warm and very friendly, and that’s what people loved about him,” she said. “He’s a novelty.”

Jim Spinelli described his father as a man who’d had his share of hardships, but who found catharsis through his work. He recalled how, when his father was widowed with two young children, he was prescribed a regimen of medication to deal with the grief.

“He walked out of the doctor’s office and threw the medicine away, and decided he was going to focus on his kids,” said Jim Spinelli.

Work was a coping  mechanism that enabled the elder Spinelli to work through his pain while providing for his children, his son said.

“We didn’t get a whole lot of personal attention, but we knew that everything he did, he did for us,” Jim Spinelli said.

“That’s a reflection of his commitment and his dependence on work.”