Trending
You are at:Home»People»Haddonfield Rescue Dog ‘Aladdin’ up for 2017 American Humane ‘Hero Dog of the Year’

Since being rescued in 2013, the pit bull terrier has become a certified therapy and crisis response dog who travels locally and nationally to provide comfort to those in need. 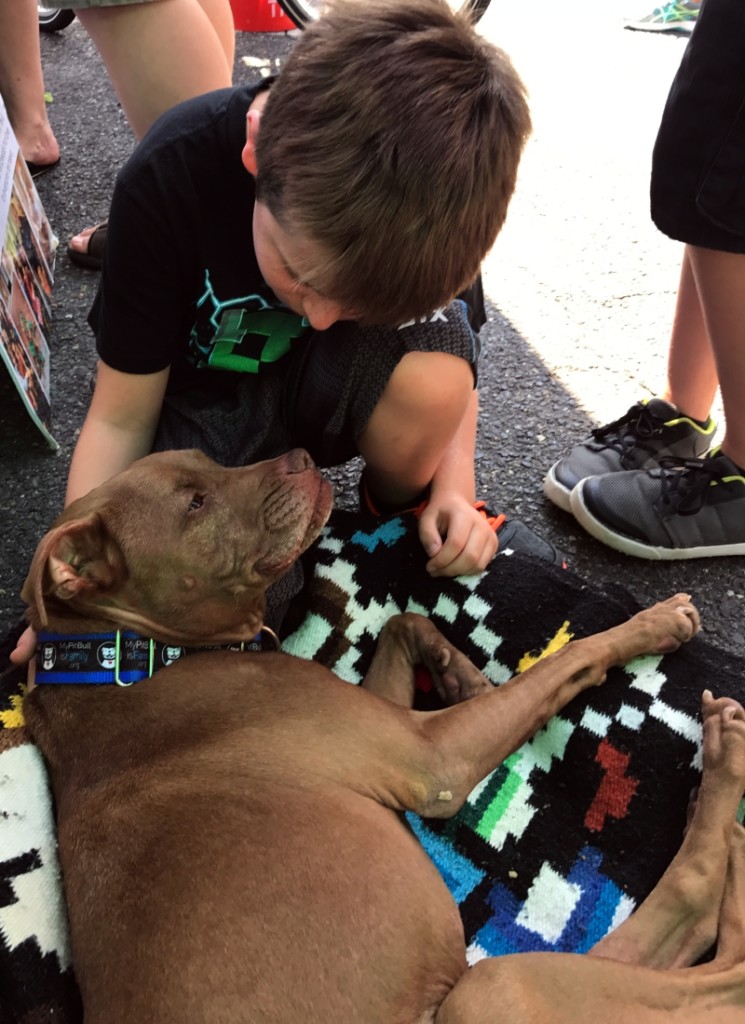 Jennifer Conners has a hard time putting into words her feelings about Aladdin, the pit bull terrier with the distinctive underbite who came into her life in 2013.

“Laddy” was plucked from the streets of Glendora, emaciated, with open wounds.

He was missing a dozen teeth, and his back legs and tail were broken.

He weighed only 18 pounds.

Conners is the director of Lilo’s Promise Animal Rescue, which specializes in working with bully breeds “basically, anything with a stigma attached to it,” said volunteer coordinator Laura Anderson.

For the past 11 years, the Voorhees-based non-profit has rehabilitated sick, starved, and emotionally abused dogs to make them “100% adoptable,” but a dog like Aladdin exceeded even those expectations, Conners said.

Fostered (and eventually adopted) by Michele Schaffer-Stevens of Haddonfield, who directs community outreach efforts for Lilo’s Promise, Aladdin became a certified therapy dog within a year of his recovery. He travels to schools, where he has helped lead anti-bullying campaigns, and is a trained crisis response canine, capable of helping people under extreme levels of stress. 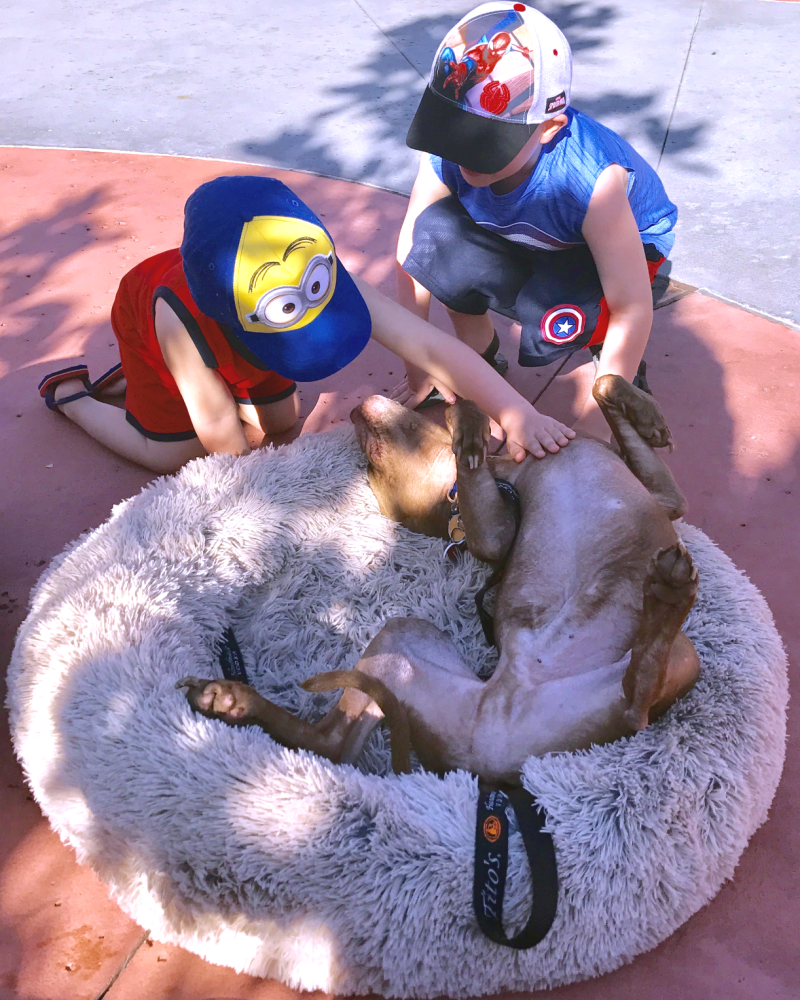 Aladdin at the Give Kids the World Village in Orlando, Florida. Credit: Lilo’s Promise Animal Rescue.

Last June, Aladdin visited Orlando in the wake of the Pulse Nightclub shooting, performing therapy visits and raising money for victims of the attack.

“He can sense when people are upset,” said Conners.

“He knows who needs him,” Schaffer-Stevens said.

Aladdin is also an ambassador for the Ronald McDonald House Charity, visits patients at Our Lady of Lourdes Hospital, and works with organizations like the Philadelphia Police and Fallen Officer Fund.

“His calendar is way more packed than all of ours combined,” Anderson joked.

With a resume like that, he won 2017 Therapy Dog of the Year in a field of 30 candidates from the American Humane Society; now Aladdin is competing against six other dogs, all best in their respective categories, for the title of American Humane Hero Dog of the Year. (The contest is open to daily voting until August 30.)

As remarkable as Aladdin’s recovery is, Conners says he’s not an outlier.

“The majority of the dogs we rescue are in [similarly]bad shape,” she said.

“Most of the time, these dogs end up in shelters through no fault of their own…because humans have failed them in one way or another.” 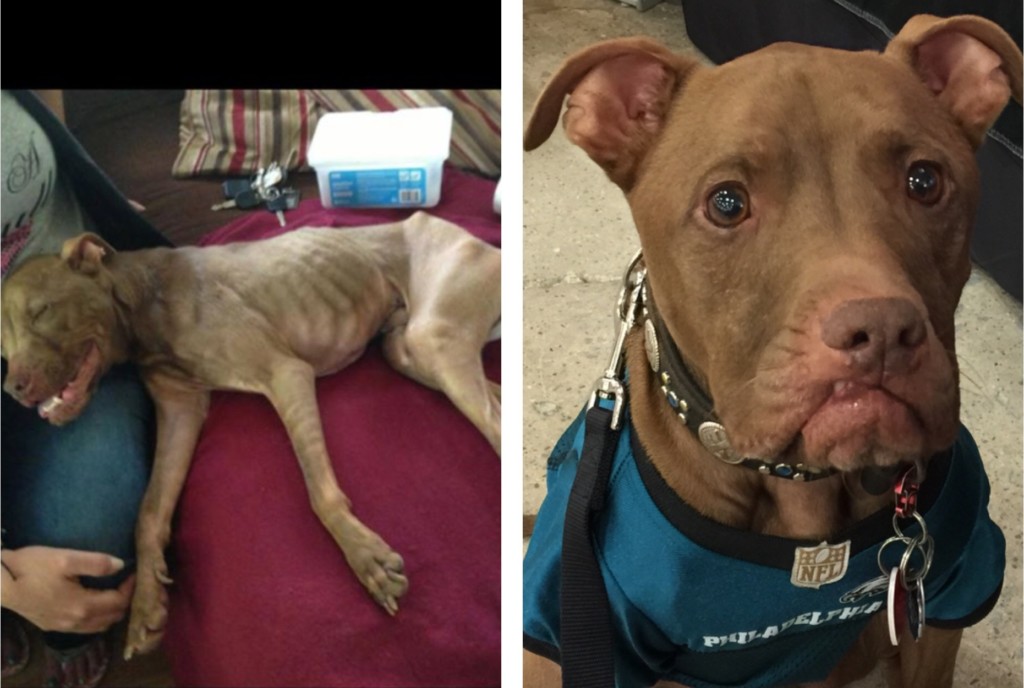 Aladdin at the time of his rescue (left) and during his fostering. Credit: Lilo’s Promise Animal Rescue.

According to Animals 24-7, a trade publication that follows the humane community, pitbull breeds are among the most commonly advertised for adoption, comprising 8 percent of the 3.4 million rescue animals the publication tracked in 2017.

Pit bull puppies are now outnumbered by pit rescues, the study reported, but are still two to four times as likely to be euthanized as other breeds.

Statistics like those make Lilo’s Promise all the more remarkable. To date, the agency has rescued and rehabilitated more than 250 dogs, nursing them back to health, fostering them, and often caring for them within the rescue staff if suitable homes can’t be found for them.