Mayor Chuck Cahn said the zoning change will open up redevelopment opportunities throughout the township. Residents feared it would be an environmental hazard. 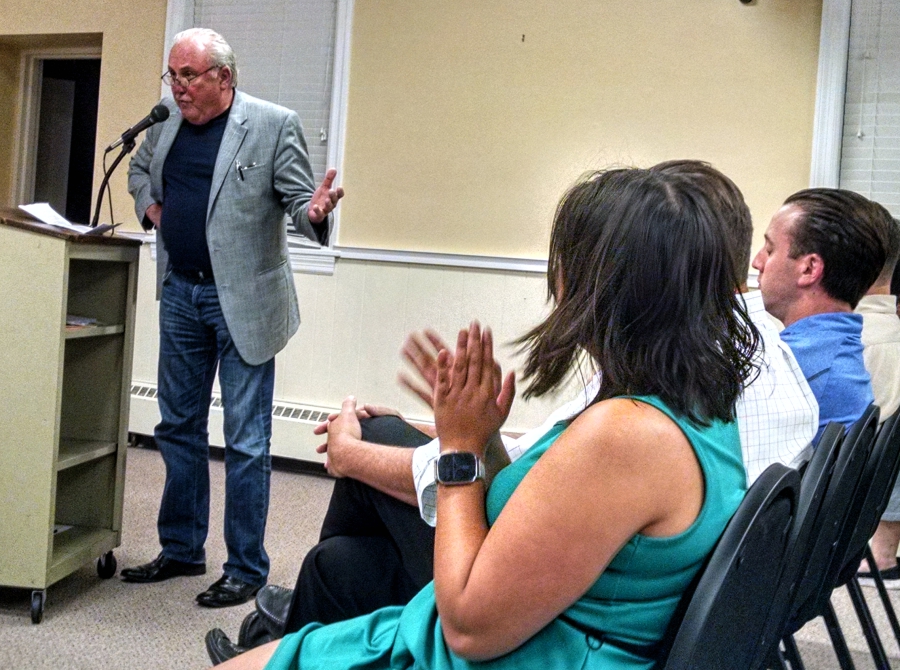 Cherry Hill residents turned up in force at Monday’s township council meeting to protest a zoning change they feared would permit gas stations to be constructed too close to nearby residential areas, but which local officials said would help promote redevelopment of unused properties.

The proposed ordinance expanded the definition of B4 (regional business) zones by adding gas stations as conditional accessory uses.

The township code defines B4 zoning as encouraging “compact and mixed-use development that is supportive of transit and pedestrian travel.” Permitted B4 principal uses include office space, academic uses, houses of worship, public utilities, drive-through banks, retail, restaurant, and entertainment, among others.

Cherry Hill Community Development Director Paul Stridick testified that the change would help clarify complications in an existing statute in order to help incentivize development at “vacant, dilapidated, [or] substandard structures” throughout the township.

He argued that allowing gas stations to be a permitted use there “could help capitalize on strategic redevelopment areas that are experiencing considerable decline.” Zoning buffers along B4 districts must be 30 feet in width from any residential district to any retail fuel sales, and cannot contain a structure, stormwater management, or parking, which Stridick said would help regulate such sites. 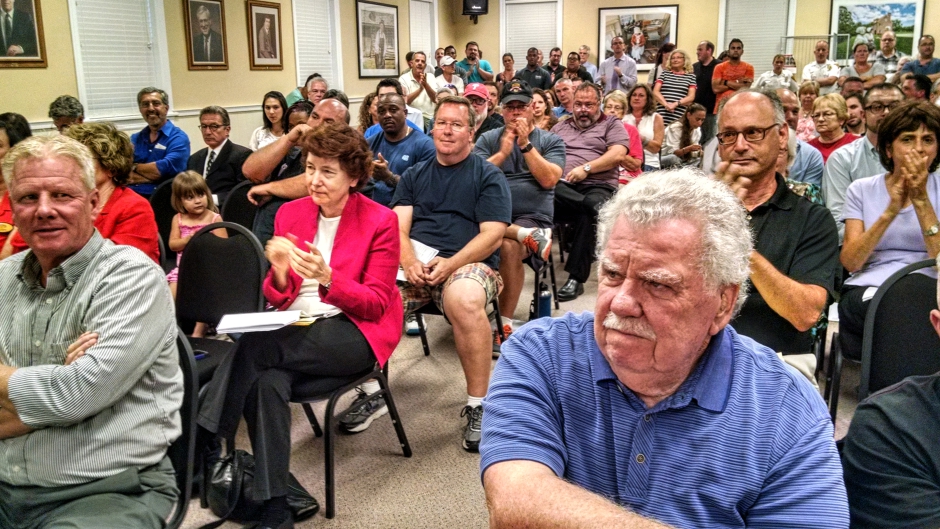 Residents clamored throughout lengthy testimony at the two-hour meeting.

On retainer from Shop Rite at the Garden State Pavilion, attorney Stuart Platt argued that the ordinance was an instance of spot zoning intended to help advance a site application from Costco at the former racetrack redevelopment site.

His clients from the Ravitz family of ShopRite supermarkets were also in attendance.

“Spot zoning is the rezoning of property for the purpose of relieving the property owner from the burden of existing regulations,” Platt said. “The ordinance is not designed to further a specific zoning scheme. The new zoning criteria will apply to only one property and one project, the Costco application.”

Platt argued that the design of the ordinance includes 15 “specifically narrowly tailored” ordinance requirements that only benefit the Costco side.

“I’ve seen a lot of Wawas and a lot of Royal Farms in my time,” he said. “Conditional accessory use is at largest 6,500 square-feet. It’s clearly designed for the Costco. Has any other property owner shown any interest in gasoline stations besides Costco? Why has the application remained dormant for two years?”

Republican council candidate Rick Short argued that overburdening the township with additional gas stations would be short-sighted if the demand for them dries up.

“All you’re going to end up with is abandoned gas stations, and nobody’s going to want to buy the land because it has underground tanks and the cost of reprocessing these things,” he said.

Resident Kristen Affrime pointed to the township Community Vision Statement, which invites residents to “imagine a town where half the vehicles use electric or hydrogen based energy” as part of a multimodal commuting system where they also walk and bike to work “along tree-lined pathways without conflict with automobile traffic.”

“Can we imagine Cherry Hill right now?” Affrime asked. “It comes down to vision. I really want to know how this Costco, how extra gas stations are going to enhance this town’s identity.”

“This is so much more than Costco,” Neary said. “I can’t even find the logic in what we’re doing. The amount of traffic, the safety hazard this brings; my children cannot play in my front yard, yet you speak to the benefit of the residents.”

Resident Rena Margulis argued that clearing way for gas stations, particularly at the former race track pavilion “would be one of the lowest possible uses of this property,” while exposing nearby families to carcinogenic benzene fumes.

“Cherry Hill has $7 billion in ratables,” she said. “If Costco brought in $9 million, how much are your taxes going to go down? Ten dollars. We have leukemia for our kids, ten dollars in savings, so people all over the west side can get worse traffic.”

“I don’t care what the buffer is, you can’t control the wind,” said resident Anthony Lawson.

Cherry Hill Mayor Chuck Cahn said that the issue on the table had become confused in the rhetoric of the evening, maintaining that the ordinance in question has a broader application than its potential impact for the Costco site. He invited residents to critique any specific plan put forth by Costco during that company’s site plan presentation.

“Costco has the right to build there with or without gas,” Cahn said. “Gas is allowed in the B3 zones. If Shop Rite tomorrow wanted to put gas in front of their Shop Rite, it would be allowed by right.”

The crowd interrupted him frequently, catcalling and yelling, “No rezoning!”

The bill passed near-unanimously, but there was a long, uncomfortable silence between Councilman Jim Bannar’s motion to adopt and Councilwoman Carolyn Jacobs’ second. Only Councilman Brian Bauerle abstained; Councilwoman Melinda Kane was absent from the meeting.

“This amendment is based on what I think are sound planning practices, and it is substantially consistent with the Cherry Hill master plan and the planning goals that are expressed therein,” Jacobs said.

“It is also consistent with our goal of promoting economic development and reinvestment across all of Cherry Hill. Anything that will be built on that site will be built on very sound engineering principles that are designed to protect the health and wellness of our residents.” 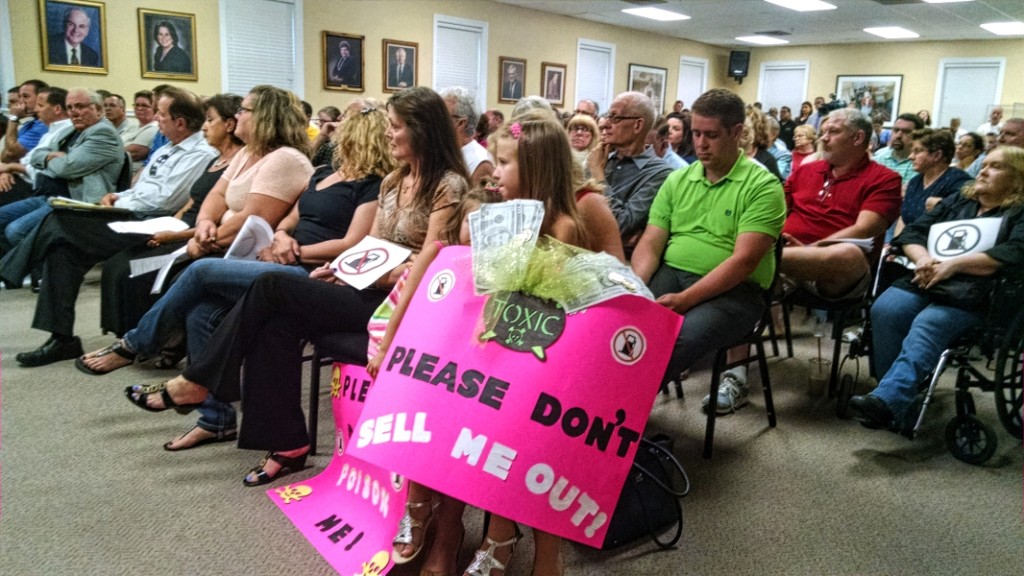 After the meeting, Stridick defended the ordinance against Platt’s claims of spot zoning by pointing out that it applies to more than 398 acres of the township across six different tracks.

Of the 72 acres of B4 zoning, only 18.5 of them are situated at the former racetrack property, he said.

The others are largely vacant or abandoned, and include sites that are among the township gateway properties.

“Where gas is permitted right in a B2 zone right now, it’s right in front of somebody’s house on Haddonfield Road,” Stridick said. “By providing gas opportunities elsewhere, we can kind of alleviate the gas in B2, but encourage it in other areas [where it’s] more appropriate.”

“The main thing is to take rotted sites, sites that are certainly not living up to their potential, and have the opportunity for something better to happen there,” he said.

The township is still reviewing the Costco project, but its proposed gas station is 1,100 to 1,200 feet away from the nearest resident, not the 30 feet minimum outlined in the buffer zone, Stridick said. In other of the B4 areas, the nearest residential developments are “hundreds of feet away, across parking lots and greenspaces,” such as the Grand Apartments on Frontage Road, he said.

At the proposed Costco site, Stridick said a 5.6-acre, “heavily treed area” along Crescent Way on the north border of the Plaza Grande housing development would be restricted from development and would remain open space. A townhouse development on Third Avenue is “inaccessible” under the proposal, he said.

Stridick also pointed out that the initial plan for the racetrack redevelopment has changed dramatically out of post-recession economic necessity, having abandoned ideas for 1 million square-feet of office space and a 150-room hotel. Aside from not being able to find tenants for those projects, their uses would generate another 2,000 to 4,000 cars, which would create the same kinds of traffic issues residents complained about during the meeting, he said. Instead, Stridick said, siting the Costco between the Burlington Coat Factory and Home Depot shops reflects “interpolation planning.”

After the meeting, Cahn said council had “a very tough balancing act” in “separating the community issues from the ordinance on second reading.

“You hear the emotion and the outpouring from the residents, and I feel the sympathy and the empathy for what they feel, but it’s two separate issues,” the mayor said. “The ordinance tonight is not about the community issues they were bringing up tonight. The issue is redevelopment of all the B4 zones that have a much better opportunity with this ordinance than without.”

Accessory-use gas stations would help draw businesses like convenience stores and hotels “that want to be near redevelopment,” Cahn said, making them “more like a B2 or B3,” through which the township has developed other areas in need of an overhaul.

Cahn said the outpouring of residents was the work of “a select few” responsible for “fear-mongering amongst people who do not understand the ordinance,” and that the local government would likely be hosting a town-hall-style meeting shortly to address their concerns, ranging from traffic to zoning to green space.

Other aspects of the racetrack redevelopment that could address some of them—a grade crossing that would allow more local access to the NJ Transit station, and the Kenilworth Connector, a lit, paved, ADA-accessible walking path from the Shop Rite to the neighborhoods nearby—are awaiting state approval, he said.