The accident occurred around 8:45 p.m. Wednesday at the intersection of East Atlantic and Station Avenues. The cyclist suffered minor injuries, and was transported to Cooper Hospital for observation. 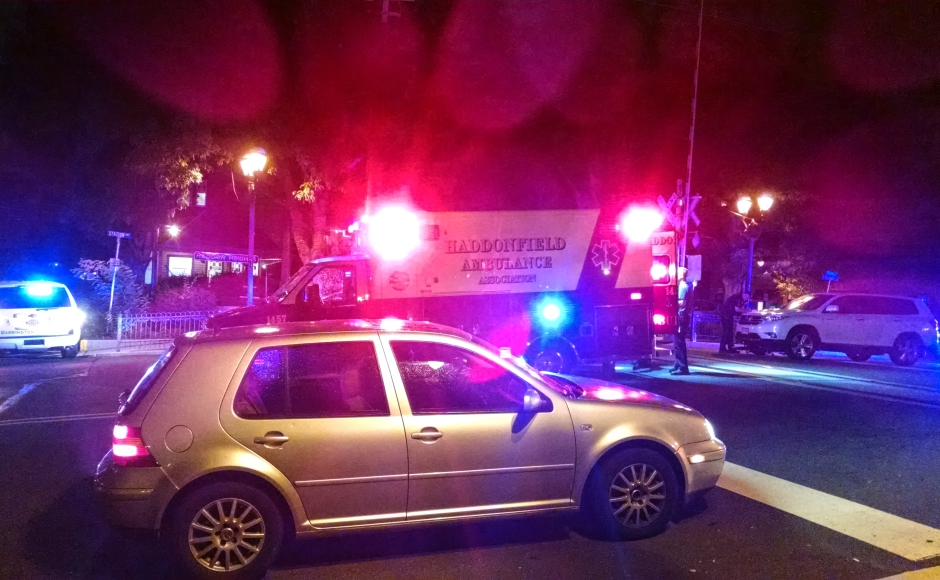 A juvenile cyclist was struck by a car in Haddon Heights August 31, and was transported to Cooper Hospital as a precaution. Credit: Matt Skoufalos.

A juvenile cyclist traveling in downtown Haddon Heights was struck by a driver Wednesday evening, sustained minor injuries, and was evacuated by EMS as a precaution, according to police.

According to preliminary information, the cyclist was traveling along East Atlantic Avenue, and had entered the intersection at Station Avenue intersection when he was struck.

The juvenile sustained minor cuts and bruises, and was transported by Haddonfield EMS to Cooper Hospital for observation, Scardino said. The captain said the accident was unfortunate and uncommon, despite the volume of traffic the intersection regularly sustains.

“All intersections at night are difficult,” Scardino said. “The car at that intersection does have the right of way because there is a stop sign on East Atlantic. It’s a tough situation for the driver.”

Scardino said speed is not typically a concern at the intersection because of the high amount of traffic in the area.

“Two county roads intersect there,” he said. “It’s the business district; you get a lot of cars.”

The driver stayed at the scene after the collision. Barrington Police were first to arrive.