Trending
You are at:Home»Police & Fire»Collingswood»Leaving Collingswood PD, Sarlo Looks Back on 27 Years

The handiwork of the retiring chief can be found within the walls of the department itself. 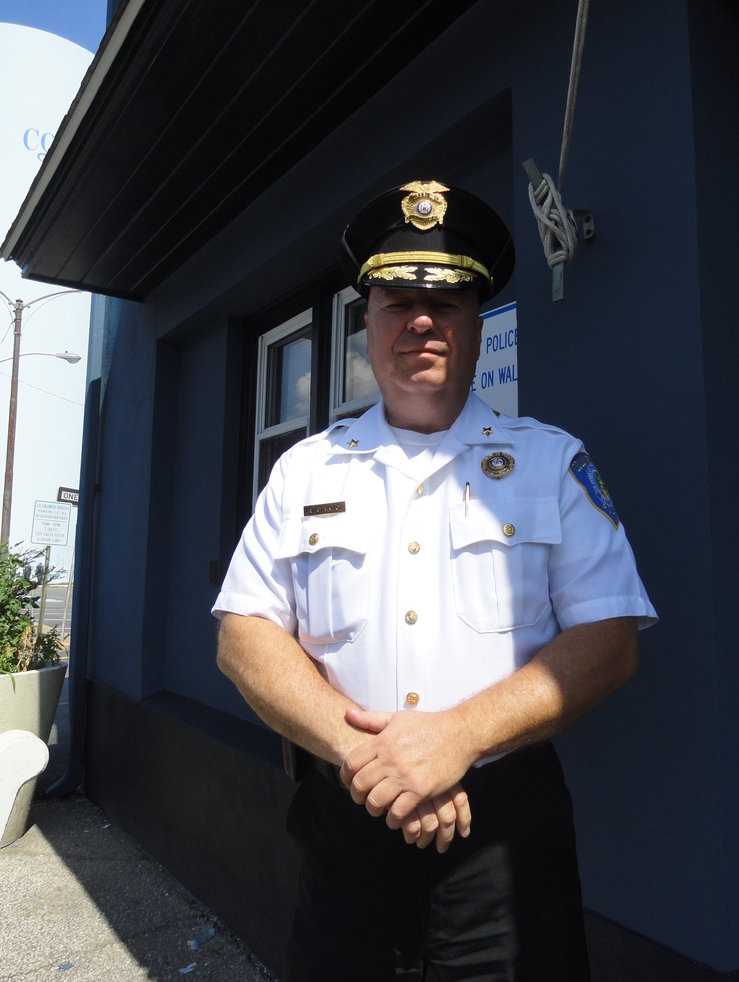 Collingswood Police Chief Richard Sarlo has worn every badge in the department on his way through. Credit: Matt Skoufalos.

Richard Sarlo was finishing up his final exams when he got the call he’d been waiting for.

It was June 1982, and the Woodlynne teenager was preparing to graduate from Collingswood High School. Sarlo had interviewed with the North Wildwood police six months earlier for a summer position, and was heartbroken when he didn’t make the cut.

He kept the whole experience to himself.

His father, a friend of the North Wildwood chief, later asked his son why he’d kept his application a secret.

Sarlo told him, “I wanted to get the job on my own.”

So when the phone rang from the North Wildwood captain asking if he still wanted the position, Sarlo replied, “When do you want me down there?”

“In an hour,” the captain said.

“I jumped in my father’s car and went down there,” Sarlo recalled. “I got my diploma, but I never walked,” he said.

“That was my dream. I wasn’t going to let that go.”

‘I thought I’d retire a sergeant’

One summer in North Wildwood spun into three more after, and the young officer got a good bit of seasoning in the elbow-to-elbow crowds. In the off-months, Sarlo returned to Camden County, where he worked in the family flower shop and applied to other police departments.

The first full-time job he landed was with his hometown force in Woodlynne in 1985. Two years later, Collingswood Deputy Chief William Carey retired, freeing up a roster spot in that department, and Sarlo was hired as a patrolman.

He spent the next 27 years rising through the department to become its chief, and held every rank along the way, a feat seldom seen in the days of the 2-percent budget cap that frequently limits the seniority that officers can achieve.

In a tidy bookend to the story, Carey’s son, Kevin, has been tapped to replace Sarlo as chief.

“Initially, I thought I’d retire a sergeant,” Sarlo said. “I have every badge that I’ve worn.” 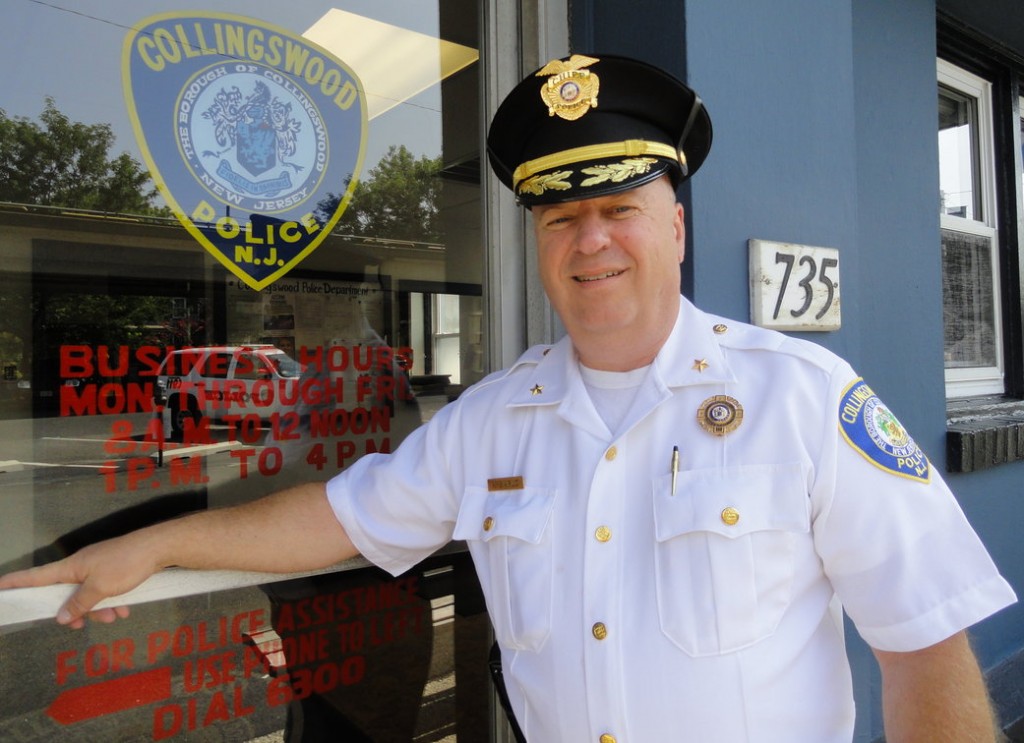 ‘You want to have continuity’

Along the way, the retiring chief said he’s “pretty much handled almost everything you can imagine” in town, from petty crimes all the way up to a homicide case in 1999.

“There’s things that happen here, but they’re nowhere near as much as [in]other places,” he said.

Yet the one policing issue Sarlo believes will never be fully resolved in Collingswood is parking enforcement.

“Parking’s always been a problem, and will always continue to be a number one problem in Collingswood,” he said. “If that’s the biggest thing that always will be around, that’s okay.”

Sarlo said he’ll remember Collingswood as “a great community” where the residents have a good relationship with their police force.

“The residents for the most part embrace us, and they want us on that line,” he said. “We’re a few steps away from Camden City and we make sure that we’re not part of Camden City, that’s for sure.”

In addition to building faith with the townsfolk, Sarlo’s handiwork is actually present in the department headquarters. When renovations were needed and budgets were tight, officers did the necessary work themselves.

Sarlo helped run wires for the computer system, built the dispatch station, installed drop ceilings, laid carpet, painted; “anything I could to make this place better,” he said.

“Getting into this position, you can’t make everybody happy,” Sarlo said, “but you do what you can for people. You’re always bouncing back all over the place. It catches up to you. It’s kind of tough.” 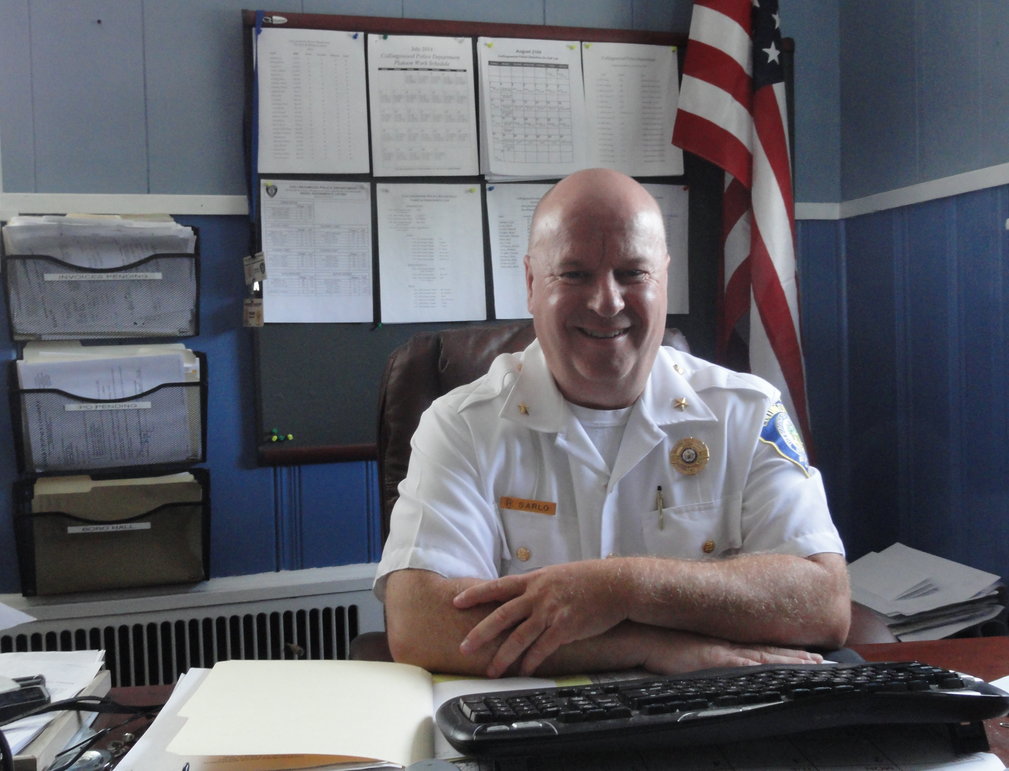 Collingswood Police Chief Richard Sarlo said he hopes he will be remembered as fair as he takes his place among the retired officers of the department. Credit: Matt Skoufalos.

What Sarlo hopes to be remembered for among his coworkers is a sense of fairness in the face of that responsibility.

“You’ve got to be straight,” he said. “I’ve chewed guys out. I’ve disciplined them. I’ve also supported them because I know it’s a tough job.

“I’m not saying I did everything right,” Sarlo said, “but my heart was in it, and that’s what’s important.”

The outgoing chief also has a sense of history. Photographs of Collingswood police through the years lined the walls of his office “just to remind guys there was a past here,” and Sarlo worries that more of those legacies will be forgotten with each passing generation.

“There were other guys that roamed these halls,” Sarlo said. “They did it for a reason.”

“I’m not going to sit here and tell you that I’m not going to have a tear in my eye when I leave this place, because I will,” he said. “The old dogs start retiring and new people come in.

“I just hope things don’t get lost in translation over the years,” Sarlo said. “You want to have continuity.”