Marla Fair, Jessie Heuer, and Sonya Lehman of Ohio say their memorial bench and plaque will create a local attraction for visitors and locals near Landon’s childhood home in Collingswood. 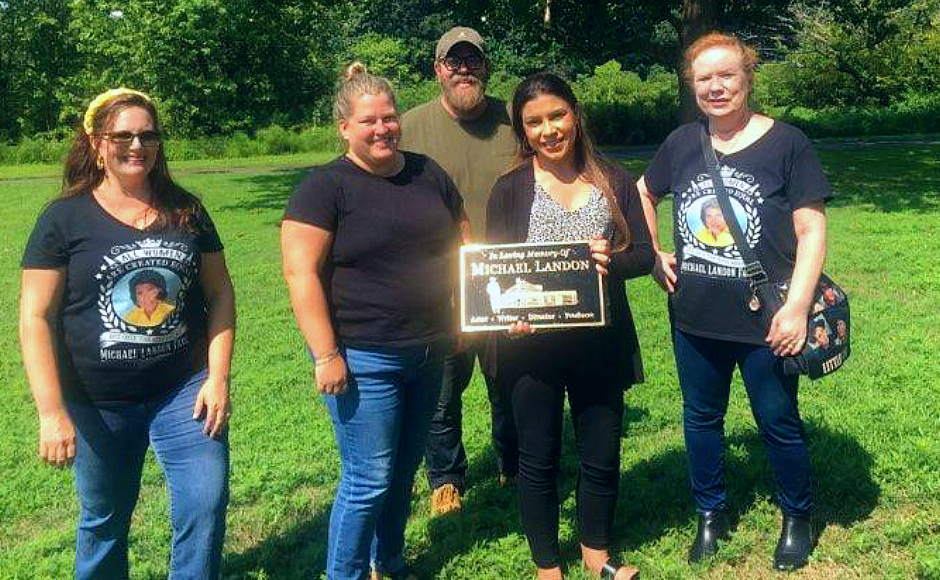 Thanks to her older brother’s love of Westerns, Marla Fair of Troy, Ohio grew up “watching Bonanza before I was old enough to know I was watching Bonanza.”

At six or seven years old, she fell in love with the youngest cowboy on the Ponderosa, Little Joe Cartwright, as portrayed by Hollywood heartthrob Michael Landon, “and it’s never ended.”

“The guy was drop-dead gorgeous,” Fair said, “but he was just this amazing individual.

“He had all these charitable causes, he was compassionate,” she said.

“We admire him for that as well as for the drop-dead gorgeous part.”

Fair eventually leveraged her love of pioneer culture into a job as a tour guide at the historic Johnston Farm and Indian Agency in Piqua, Ohio, where she met volunteer Sonya Lehman, also of Troy, Ohio, whom she came to discover shared her love of all things Landon.

Despite describing Heuer as “probably one of the biggest [Michael Landon]  fans on the face of the earth,” Fair is no less a devotee. Her website, “Bonanza Movable Men,” features stop-motion narratives crafted with collectible Bonanza action figures, including a Little Joe that Fair customized to match his on-screen costuming.

Lehman and Huer assist with the shoots. The trio is so committed to the legacy of the original series that Fair said they’ve gotten permission from its attorneys to produce images based on the show.

“We’ve been out to Lorne Green’s house twice,” she said. 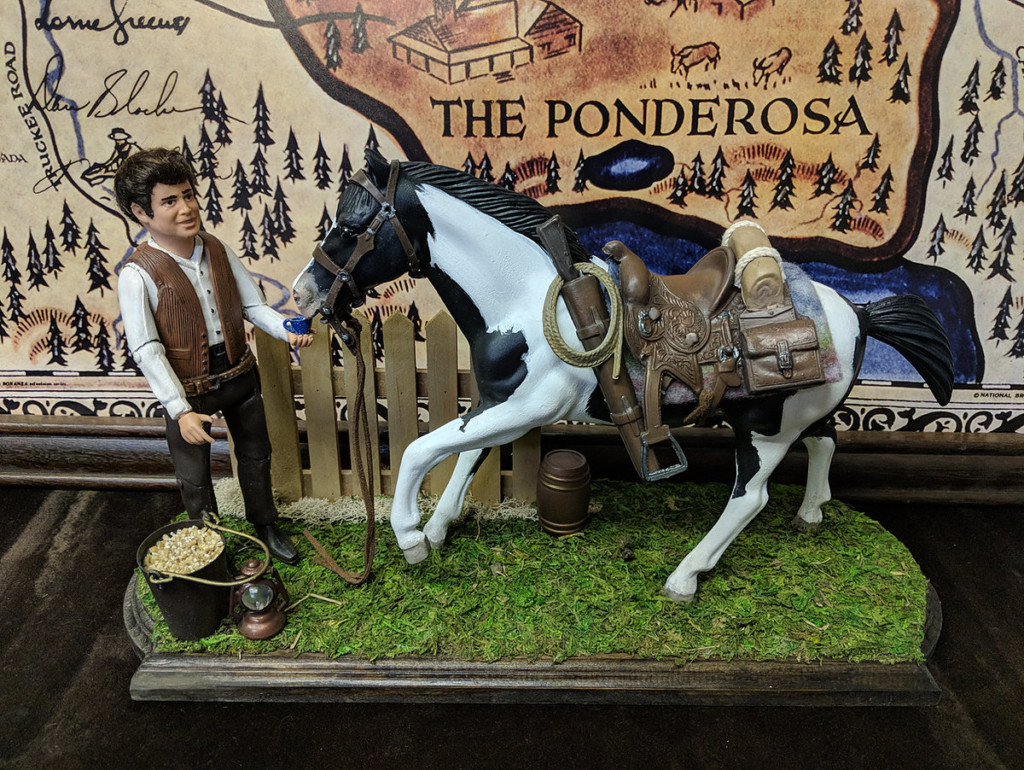 In the company of fellow Landonites, it’s safe to “geek out” about their shared passion for the actor, Fair said, adding, “you feel like you’ve got people who understand you as opposed to people thinking you’re nuts.”

She hopes to capture that enthusiasm in a memorial dedicated to the actor’s legacy, to be installed in a park near his childhood home on South Newton Lake Drive in Collingswood.

Together, the trio have raised more than $5,000 for a memorial plaque, bench, and landscaping, which they hope to unveil by Landon’s birthday (October 31) of this year.

Fair led the fundraising charge for the memorial bench, and Heuer boosted it on her fan pages; Dean Butler, who played Almanzo Wilder on Little House on the Prairie, even issued a Cameo video in support of the project. In August, the three Ohioans traveled to New Jersey to confirm the details of the monument with municipal and county government officials.

“We wanted to honor the young kid who grew up here in Collingswood as opposed to the actor and bigwig that he became later on,” Fair said.

‘He knew it was going to live on’

Landon—a stage name chosen out of the phone book—was born Eugene Orowitz in Queens, New York. When he was four, the family moved to Collingswood, New Jersey, where Orowitz described feeling socially isolated, enduring anti-Semitic taunts from his peers and public embarrassment from his parents’ unhappy marriage.

But a standout performance as a javelin thrower at Collingswood High School earned Orowitz a track-and-field scholarship to the University of Southern California. After his athletic and collegiate careers were derailed by injury, Orowitz turned to show business, where he eventually enjoyed a nearly 40-year career as a writer, actor, and director.

Accounts of his time in South Jersey have led many to infer that Orowitz left the borough on bad terms, but Fair doesn’t see it that way.

“We had fans say to us, ‘Why would you want to honor him there?’” she said. “Partly because it’s the genesis of what he became. We don’t think he hated the town at all; we’re hoping that by doing this, in a way, we can kind of help Collingswood to erase that.

“It was 65 to 70 years ago,” Fair said. “People living here are not the same people. We can all blame our hometown for something. We’re trying to fight against it.”

As popular as Landon remains among first-run viewers of his television work, Heuer believes that his performances continue to win over newcomers thanks to digital streaming services and broadcast syndication.

“Some of the stars say Little House on the Prairie is more popular now than it was in their era,” she said. “He knew it was going to live on.” 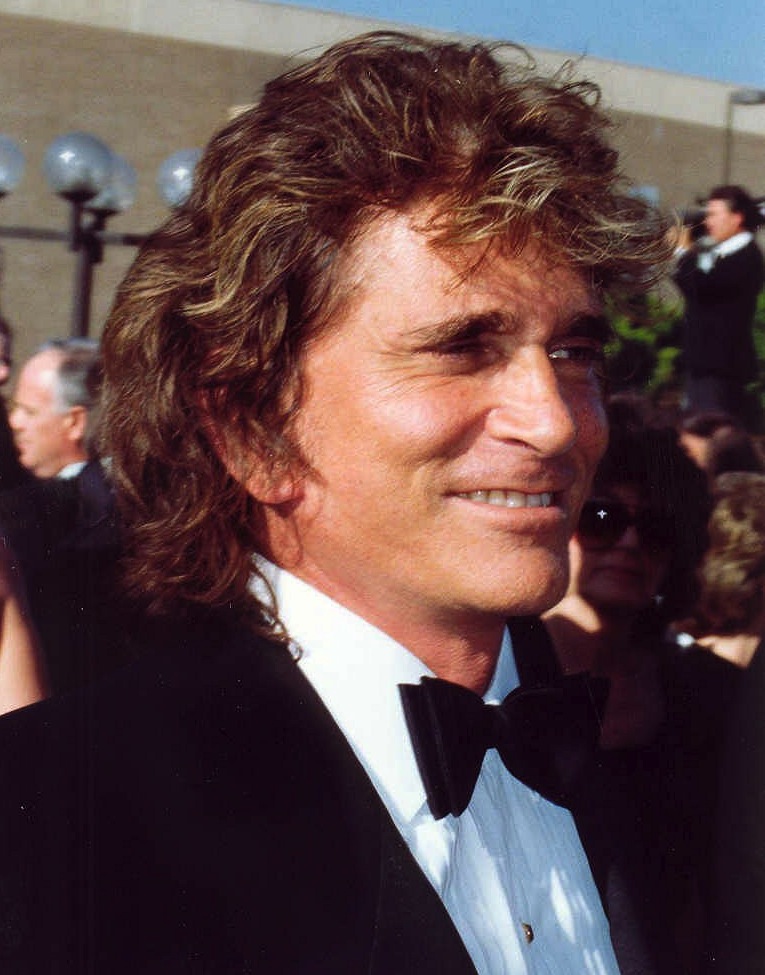 In addition to a broadened audience, which Heuer described as “fans from age 15 to 90,” Landon’s work has a way of resonating with communities of faith, and those families, like Heuer’s, who appreciate its messaging.

Her favorite quote of Landon’s is taken from a 1991 interview with Johnny Carson on The Tonight Show, just two months before the actor succumbed to pancreatic cancer:

“I believe that we really are created in God’s image, that there is God in all of us.”

“[Landon’s]  shows are about faith, family, love, against prejudice, accepting people for who they are, and all those good things we aspire to be,” Heuer said.

Like most things associated with Landon’s career, the bench project is rooted in its inspirational impact. Lehman said she’d like it if the memorial site could help others to find connections to their own dreams, as she believes he did while sitting on the banks of the Newton Creek.

“Everyone knows that actor and what he became and what he did, but I think it’s important to remember what he came from, and the little boy who was dreaming of helping people and doing something better with his life,” Lehman said.

“I think he had a talent for taking his pain and turning it into a positive message that everyone of all ages can touch on, can relate to,” she said. “We’ve got a lot of pain and stress in today’s life, and I think his work is as important today as it was then.”

The plaque at the upcoming memorial site will commemorate Landon’s tenure on Bonanza, just as Knight Park’s Little Treehouse on the Prairie playset, championed by Abbe Efron of Cherry Hill, pays homage to that series. Eventually, Fair said the group “would like to do something to honor Highway to Heaven,” Landon’s other signature TV series.

“We have talked about a statue,” she said.

Perhaps the solution would be to revisit Collingswood resident Joe Bonaparte’s efforts to crowdfund an inflatable Michael Landon statue. Although Bonaparte’s plan to craft a Landon-centric roadside attraction didn’t find enough support, Huer said she’s happy to help get something off the ground.

“If he wants to do it, we can help him start a GoFundMe,” she said.