Incumbent Democratic Governor Phil Murphy and his Republican challenger, Jack Ciattarelli have vowed to count every ballot in a statutory process that runs early into next week. 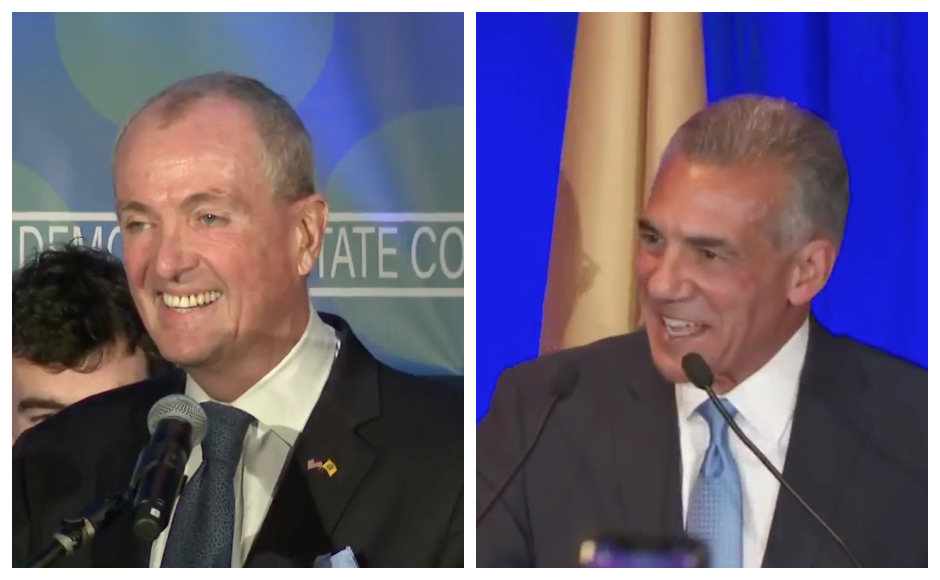 On Election Day, neither Phil Murphy nor Jack Ciattarelli could claim victory at the end of a tightly contested gubernatorial race. Credit: NJ Pen.

After a longer-than-usual wait for voting returns, both New Jersey gubernatorial candidates sent their supporters to bed on Election Day knowing that the outcome of the top race in the state wouldn’t be settled before they awoke.

At the time they dismissed their followers, incumbent Democrat Phil Murphy and his Republican opponent Jack Ciattarelli each promised that, once all the votes were tallied, they’d lock up a victory for their party.

By mid-morning, Murphy had overtaken him, and, as of Wednesday afternoon, the Democrat was up by some 15,000 votes. However, that lead change wasn’t the byproduct of anything other than the balloting process playing itself out according to New Jersey electoral statute.

Although the Associated Press called the race in favor of Murphy Wednesday evening, the volume of votes collected through mail-in, drop-box, and provisional ballots must all be processed through county election commissions across the state before the final results can be certified November 15.

For a start, said Camden County Republican Election Commissioner Richard Ambrosino, there’s always a natural time delay between the closing of the in-person polls and the collection and electronic tabulation of voting machine cartridges.

Additionally, votes processed from the more than 400 secure ballot drop boxes across New Jersey wouldn’t have been reported in Election Night totals. In Camden County, those 29 drop boxes closed Tuesday at 8 p.m., at the same time as the polls, but they didn’t reach the county elections board until 12 a.m. Wednesday, Ambrosino said.

One drop box is allocated per 5,000 voters in a community, which means that more densely populated areas, like Bergen County, which has 66 drop boxes, will have more ballots to process.

Camden County is also one of the two biggest Vote By Mail (VBM) counties in the state, with 97,000 voters permanently on VBM rolls and 3,000 others who chose to vote by mail in Tuesday’s election as a one-off.

As long as VBM ballots are postmarked by November 2 or earlier, and are received by their county election commissions by Monday, November 8, they are valid and will be counted.

Ambrosino said he expects several hundred more ballots will be added to the tally in this fashion over the next few days in Camden County alone.

Significant numbers of VBM ballots still remain outstanding elsewhere in the state, including in Essex and Monmouth Counties, he said.

Once the VBM ballots are resolved, Camden County election officials can move to process another 5,800 provisional ballots that must wait until Tuesday, November 9, to be addressed. These can’t be processed until the grace period for receiving VBM ballots concludes, Ambrosino said, because provisional ballots must be checked against the mail-in returns first.

He expects to see “subtle changes” to the total results through next Tuesday, but no returns are likely to greatly affect up-ballot races in Camden County. A few local government races (in Barrington, Clementon, and Winslow) are separated by fewer than 100 votes, however, and are unable to be forecasted.

How could those ballots affect the races? Ambrosino said that VBM ballots tend to favor Democratic candidates, while provisional ballots often go in favor of Republicans.

Aside from the time it takes to process the VBM and provisional returns, Ambrosino said Tuesday’s in-person voting process was relatively free of snags.

“We had a couple polling places open late because of connectivity problems” with the digital voter roll sign-ins,” he said, “but those voters were given a provisional ballot. No one was turned away.” 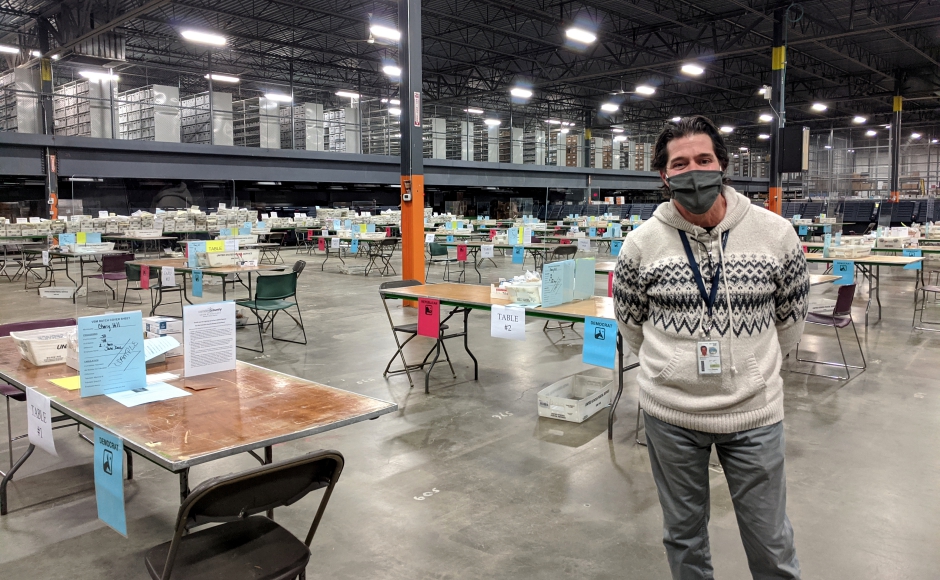 As close as the race was Tuesday night, analysts across the state and country are wondering what to make of Ciattarelli’s strong showing at the polls, as he had been reported to be trailing Murphy by double-digit percentage points at times throughout the campaign.

Ambrosino, who also chairs the Camden County Republican Committee, offered a few observations, ranging from historic (Republicans vote in greater numbers when the weather’s bad) to recent (counties south of Burlington and Mercer have gone redder in recent years).

For a start, in Camden County, Ciattarelli outperformed Kim Guadagno’s 2017 effort; he trails Murphy in the county by 29,000 votes, whereas Guadagno lost by 44,000 votes just four years ago.

“I didn’t see this coming,” Ambrosino said. “What surprised me more was the outcomes in the legislative districts: 2, 3, 8, 11. Senate races in [Districts]  11 and 3 are held by Democrats, but it’s very close.”

Ambrosino attributed the surprise of Ciattarelli’s performance to a hunch that “a lot of pollsters may over-sample Democrats,” who outnumber registered Republican voters by 1 million in New Jersey.

“That’s going to skew your sample size,” he said.

Ambrosino also views Ciattarelli’s strong showing as keeping with a national rebuke of U.S. President Joe Biden’s first year in office rather than an embrace of national Republican politics, which in 2021 are strongly rooted in Trumpism.

He further believes many New Jersey voters cast their ballots in response to Murphy’s policies, particularly those executive orders issued during the state of emergency throughout the novel coronavirus (COVID-19) pandemic, as well as their traditional dissatisfaction with the impact of high tax rates in the state.

Ciattarelli’s campaign hammered the incumbent on a comment he’d made during the campaign—“If you’re a one-issue voter and tax rate is your issue, we’re probably not your state.”—in television ads that isolated the remark. Railing against the high cost of living in New Jersey always strikes a resonant chord with voters. 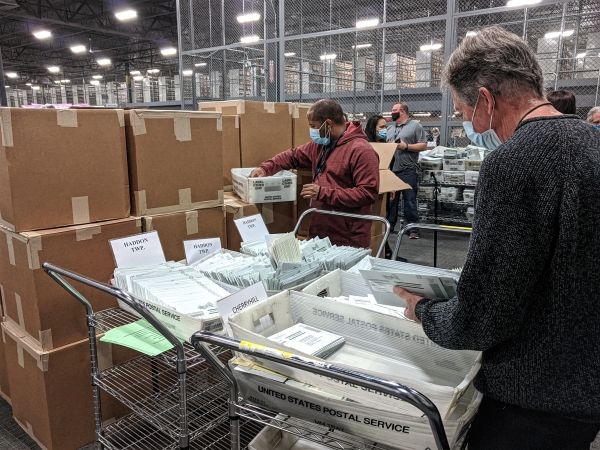 In a race this close—on Wednesday afternoon, the two candidates were separated by some 7,600 votes—the impact of some 18,000 votes cast for third-party gubernatorial candidates may be felt more dearly than in other contests.

“We always get that; it’s hard to tell who they suck votes off of,” Ambrosino said.

“That could play a role in this election depending on the final outcome.”

If the margin between both candidates remains narrow, “there’ll probably be some legal challenges,” Ambrosino said.

The last time a gubernatorial race was decided by a four-digit margin was 40 years ago, when Democrat Jim Florio fell 1,787 votes shy of Republican Tom Kean for the highest office in the state.

“I don’t remember one being this close,” Ambrosino said. “It’s going to be interesting to see [what happens next].”