After bombings from the Jersey shore to Manhattan, homeland security agents encouraged first responders to deepen their community relationships and citizens to sharpen their vision. 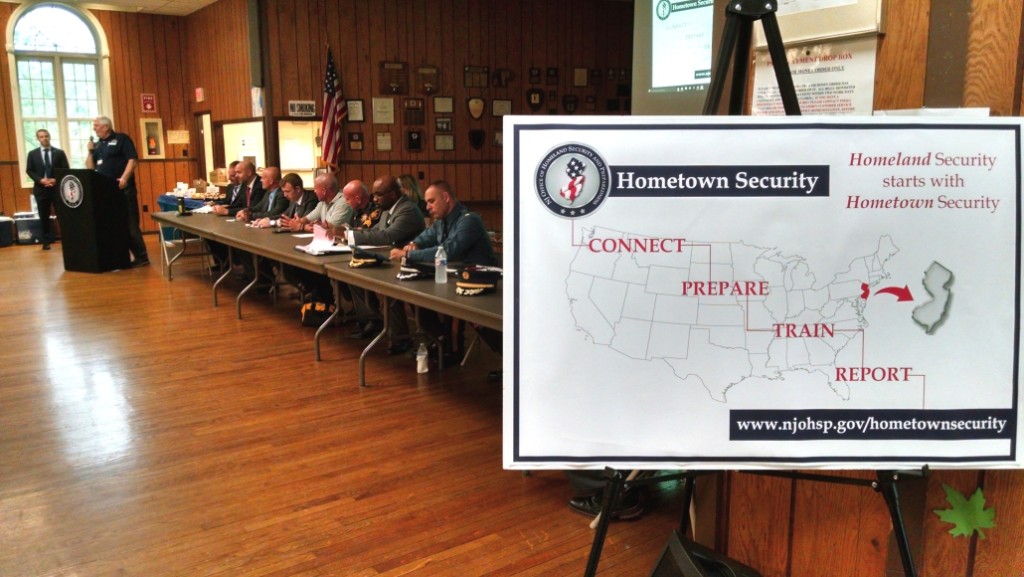 Two weeks after investigating multiple bombings from Seaside Park to lower Manhattan, officers from the New Jersey Office of Homeland Security and Preparedness (OHSP) were in Camden City, talking about threat dynamics and ways in which business owners and residents can “harden” themselves to terrorist attack.

From the OHSP perspective, homeland security begins with hometown security, making it a shared civic responsibility, Gutkin said. In the event of an emergency, first responders rely on established relationships with the community to better protect it.

“No longer is it easy for intelligence community to pick up chatter on things being planned,” Gutkin told the crowd. “You are the tip of the spear when it comes to law enforcement [and] emergency professionals being able to protect against the next attack.” 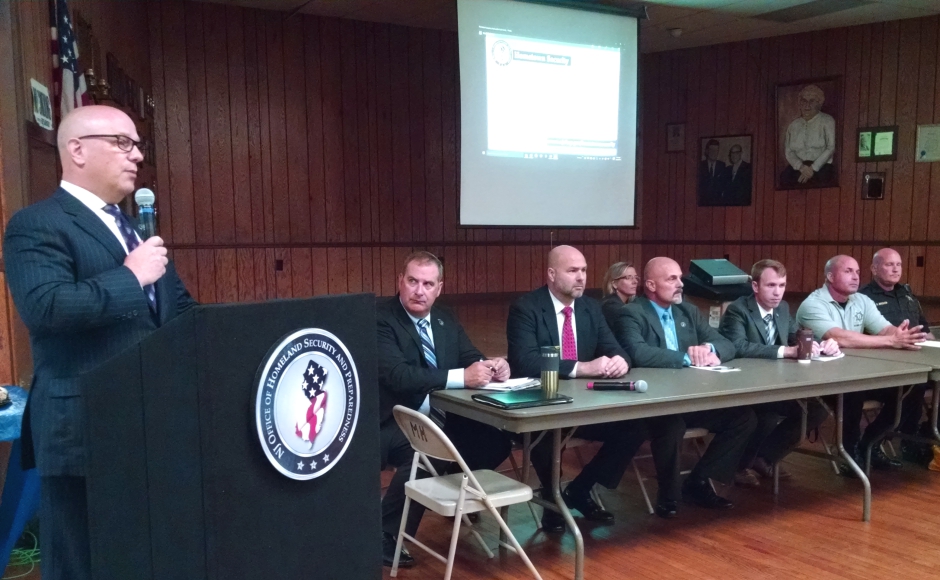 Domestic terrorism today is less likely to be coordinated overseas than it is to be the work of “homegrown, violent extremists,” or HV’s, said intelligence analyst Gerard Martin.

Such individuals may be motivated by any number of reasons, not all of them political.

Unlike in prior years, when most plots and attacks were centered on explosives, many contemporary incidents are the work of people with guns or knives, Martin said.

They have been shown to seek out “soft targets,” which include large public or community gathering spaces, mass transit centers, shopping and entertainment districts, and schools and houses of worship.

Five people were arrested in New Jersey in 2015 whom the agency regarded as homegrown, violent extremists, Martin said. In the event of an imminent threat, the first call should always be to 9-1-1; if the circumstances are less clear, a call to 2-1-1 or interaction with the Safe-NJ app can alert the state counterterrorism watch, he said.

Although the Camden County Bomb Squad is called out frequently to investigate suspicious packages, Sergeant Brian Madison said the kinds of bombs that were planted in New York and northern New Jersey haven’t been observed in the area. Still, he urged residents and business owners to exercise caution around bags and belongings that they didn’t recognize. 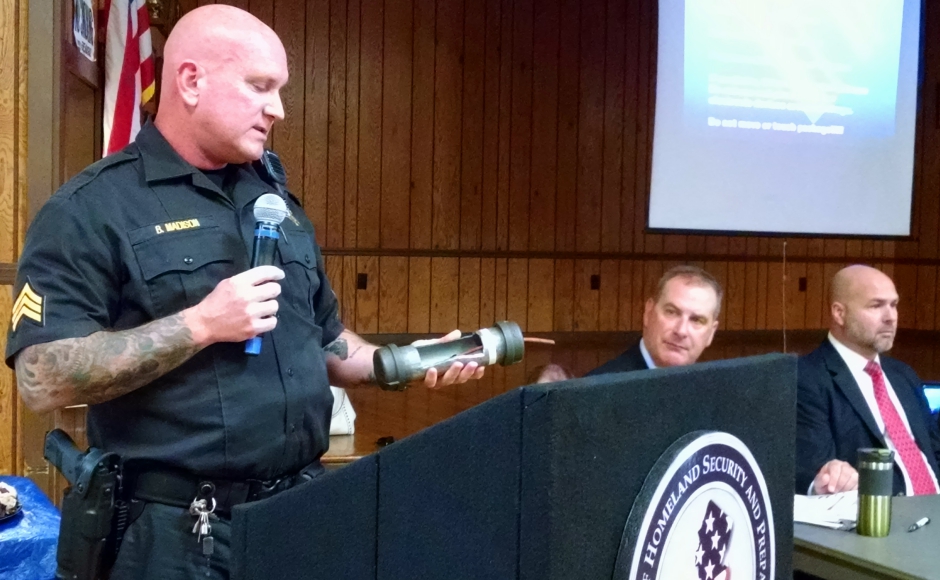 “There’s always a fine line, especially when it comes to bomb intelligence,” Madison said. “There’s a great number of homeless people in the city of Camden; they don’t really have places to put their things.

“For the public, the store owner, it’s better to be safe than sorry,” he said. “Let the first responders determine what’s suspicious.”

Even if an explosion doesn’t cause a shrapnel-based injury, the blast pressure effect “can scramble your insides” within a close enough range, Madison said.

First responders should try to establish a 300-foot minimum perimeter around a suspicious package—“yellow tape doesn’t cut it,” he said—and anyone in the area should “get as far away as you possibly can.”

“We err on the side of caution,” said Detective Nick Danze. “If you can see the bomb, the bomb can see you.”

The likelihood of a bombing attack in South Jersey is small, and Danze said citizens can have greater peace of mind knowing that law enforcement officials perform threat analyses and emergency planning to put systems in place prior to any incident ocurring. 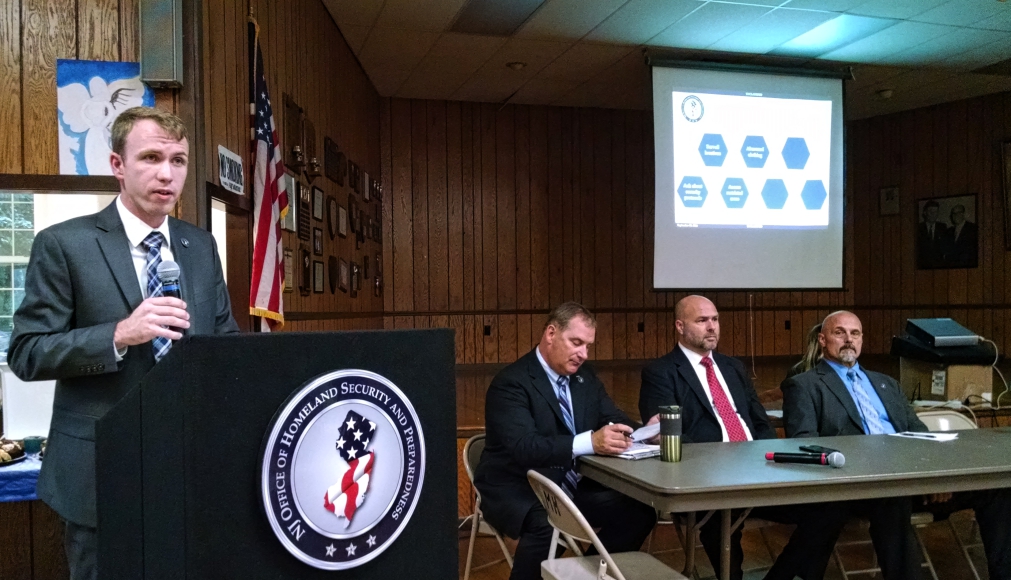 “To me, that’s the whole idea of a terrorist’s mind, to terrorize you,” Danze said. “They achieve their goal by scaring you and limiting you from going [out].”

“These things can happen anywhere,” he said. “Every jurisdiction, every agency really needs to prepare as if it will or it could happen here. Prevention is key.

“We don’t want people to live in constant fear,” Handy said. “We can’t just dismiss it as it will never happen here, but at the same time, you have to trust and participate in some of the programs and processes that are in place.”