In the nearly 70 years since Carly Novell’s grandfather hid in a closet to escape a mass shooter in Cramer Hill, exponentially more American children have been victimized by gun violence. 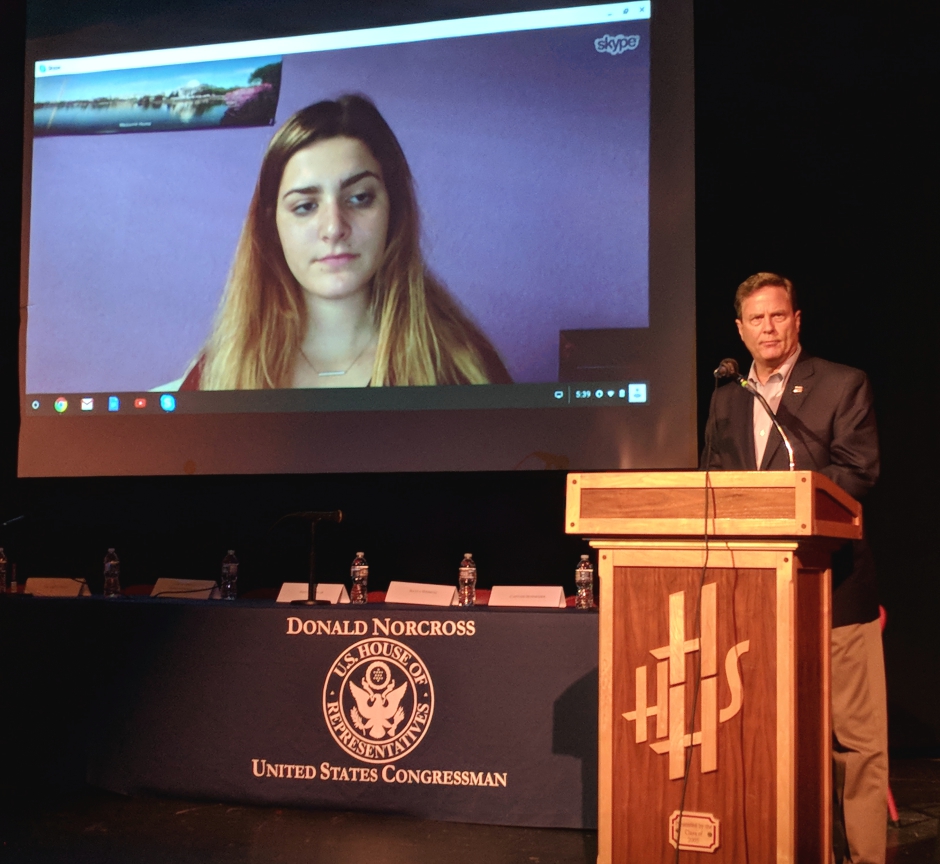 On September 6, 1949, Camden resident Charles Cohen, then just 12 years old, hid in a closet in his family’s Cramer Hill home while his neighbor, Howard Unruh, unloaded a German pistol into his parents.

Charles survived; his family and 11 other people did not.

This February, almost 70 years later, his granddaughter Carly Novell, 17, survived a mass shooting at Marjory Stoneman Douglas High School in a similar fashion: by hiding in a closet.

Unruh’s spree is remembered by historians as being among the first mass murders in American history.

It’s a chilling synchronicity that its survivor’s descendant should live through a similar horror, much less in a public school.

But statistically speaking, Novell’s experience is a much more common one at her age than Cohen’s was at his. On Tuesday, Novell spoke about her experiences via Skype at a panel discussion on school violence hosted at Haddon Heights High School.

“Since 1949, when my pop-pop’s family was killed, virtually nothing’s changed,” she said. “Shootings are only happening more often.

“Violence is similar to a virus,” she said. “It has similar pathways. It spreads. 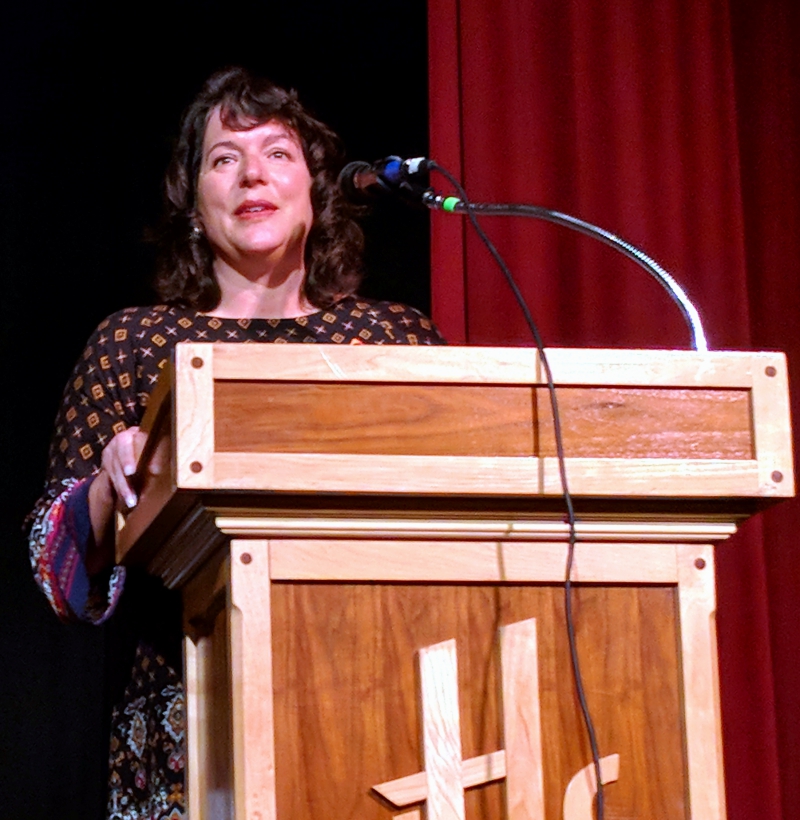 Finding ways to intercept such incidents with “violence interrupters” is one such strategy to address root causes of mass killings, Cogan said, citing findings advocated by the group Cure Violence.

But without legislative support and a comprehensive approach to reforming gun laws, any strategy will be incomplete, said Haddonfield resident Lynn Howard Hoag of the advocacy group Moms Demand Action for Gun Sense in America.

“Crime in America is more lethal because of easy access to a gun,” Hoag said.

“We need background checks on all gun sales; under current law, there are loopholes.”

Hoag said she’d like to see federal laws changed to allow police to intervene to protect the dating partners and children of gun owners, not only spouses and children from a marriage.

She advocated for extreme risk protection orders, which would allow police to confiscate temporarily guns from someone deemed suicidal. And she believes the minimum age of gun ownership should be raised to 21, citing an elevated rate of gun crimes among Americans younger than that age.

Novell said she’d like to outlaw the AR-15, a civilian analogue of the military-grade M-16, as well as bump stocks, which absorb recoil and allow shooters to fire semiautomatic weapons with the approximate speed of automatics.

She called for people on both sides of the gun-control issue to find common ground in defense of protecting children.

“Children should not be being killed in our country,” Novell said. “It’s not something that someone should disagree with.

Camden pediatrician Indira Amato echoed her sentiment, citing statistics from the American Academy of Pediatrics that 12 American children are killed and 66 injured daily due to gun violence.

“This is a public health epidemic like any other,” Amato said. “We are standing on common ground. We are all vested in the safety of our children, and must work together to advance meaningful legislation that keeps children safe.” 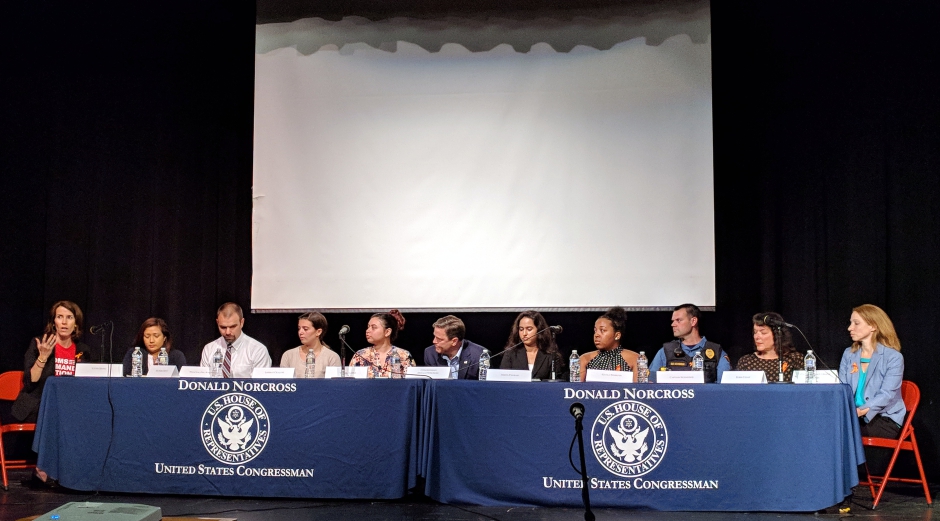 Ishita Panwar, a junior at Cherry Hill East High School who participated in that township’s lobbying for increased school safety measures, said her community was able to agitate for change because residents found that common ground.

“With a shared vision, more people were able to get involved,” Panwar said.

“There’s too much divide in this country right now as to the nitty-gritty details,” Panwar said. “Each one of us is trying to accomplish safety.”

Kayla Webster, a junior from Washington Township High School, agreed with Panwar that “allow[ing]every little detail to tear us apart” is derailing what should be fundamental conversations about gun safety as child safety.

“We cannot keep hiding behind the excuse of bullying,” Webster said. “Everyone goes through tough times, but because somebody had access to a gun and nobody took the time to talk to a child, these massacres keep occurring.”

U.S. Congressman Donald Norcross (D, NJ), who convened the panel in the ramp-up to the June 5 New Jersey primaries, said the failure of elected officials to overcome partisan gridlock in passing gun reform is largely to blame.

“What happens after each one of these horrible incidents? We as representatives have a moment of silence out of respect for those who lost their loved ones,” Norcross said. “But that’s all we do.

“In fact, it is our obligation, no matter where you are on the subject, to have a conversation,” he said. “The idea of coming together and working through these things is imperative.”