Trending
You are at:Home»Government»Three Weeks After Historic Storms, Some Still Waiting to Return Home

The damage has two Haddonfield families asking whether a failure of local infrastructure contributed to flooding that has kept them out of their homes with no relief in sight. 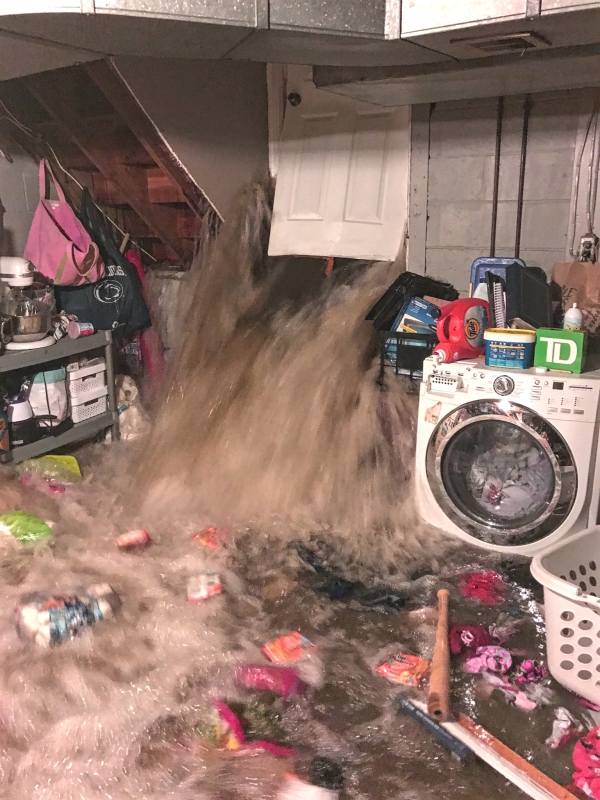 This photo of flooding in the basement was the last one Jessica Vespe captured before escaping out the window of her Haddonfield home in a June 19 storm. Credit: Jessica Vespe.

The first thing Jessica Vespe remembers about the storm is waking up in the middle of the night to the sound of her dog pacing around.

When Vespe got downstairs, she realized it wasn’t the dog asking to go outside, but alerting her to the water pooling on the floor of her family room.

The mother of two headed down to the basement of her split-level home, where she saw her kids’ toys bobbing in an ankle-deep current.

Vespe started scooping things up, putting what she could on tables.

She reached for her phone to take a picture of the scene, and that’s when she heard the crack.

Then she found herself searching for another way out.

Vespe climbed atop a table, looking up at a transom window near the ceiling. When she opened it up, water started pouring in from the other side of the house. The only thing to do was take a deep breath and wriggle through.

That was June 19. The family of four has spent the three weeks since the storm living out of a camper parked on the front lawn of their Haddonfield home, surrounded by the broken, waterlogged possessions they hauled out when the flooding subsided. 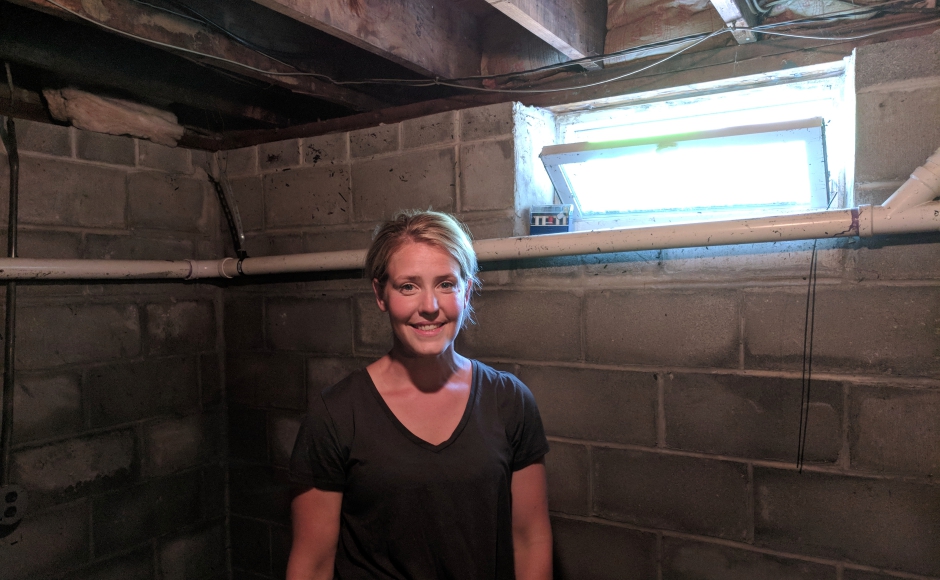 Jessica Vespe stands beneath the slender window through which she escaped her basement during a June 19 storm. Credit: Matt Skoufalos.

Their car was towed away a week ago, a total loss.

The kids lost most of their toys, and insurers have denied the family’s claims for anything storm-related.

The Vespes are hopeful that a new heat and hot water system will be installed this weekend, and they’ll be able to return to the house.

This isn’t even the first time their Concord Drive neighborhood has been hit like this.

During the same storm, Vespe’s next-door neighbors, Pat and Anthony Luciotti, were forced to flee their Scarborough-built rancher with the clothes on their back. Its foundation collapsed under the weight of water that blasted through the walls, and the structure has been condemned. They’ve been locked out since.

Neither, the Luciottis say, can they get any help from USAA, with whom their home is insured, although the company has covered their car, which also was flooded in the storm.

In the interim, the Luciottis said they’ve been supported by friends, family, and “total strangers,” who have supported them through crowdfunding and meal trains. Pat Luciotti said she was uncomfortable with the help, “was quick to realize I don’t think I could say no.” 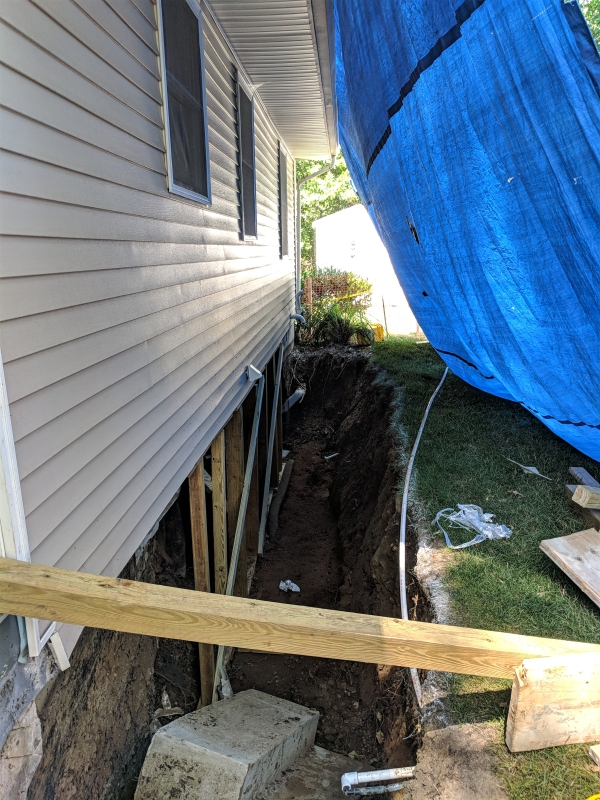 The foundation of the Luciotti family home in Haddonfield after it was destroyed in a June 19 storm. Credit: Matt Skoufalos.

Perhaps most frustratingly, the family said their issues with drainage on the block have comprised an ongoing argument with the borough government dating back at least a decade.

Pat Luciotti claims the water that flooded her property wasn’t properly diverted away from the culvert beneath the PATCO Speedline track in her backyard.

Vespe has photos that show the drainage apparatus clogged with enough branches and debris to resemble a beaver dam.

It’s since been cleaned up, but both families wonder whether the damage they suffered was a result of the stormwater or of engineering that failed to manage it properly.

“This issue with the town and stormwater drainage has been an ongoing argument,” Pat Luciotti said.

“We have photos and documentation going back from ‘08. All the water from a few-block radius is coming to a very small pinpoint.

“This was a failure of drainage,” she said. “We had a structural engineer perform a two-page assessment. Water wouldn’t have blown out the wall. That was hydrostatic pressure.”

Haddonfield Commissioner Jeff Kasko said the local government is still investigating the cause of the damage to properties on the block. Its engineers haven’t yet determined whether the design of the Concord Drive drainage system was a factor in its failure.

“We have to get to the bottom of what caused the backup, or the plugging, or the failure of that drain to handle the water,” Kasko said. “It’s hard to know if it’s the sheer volume that caused that, or the structural or engineering failure that’s to blame.” 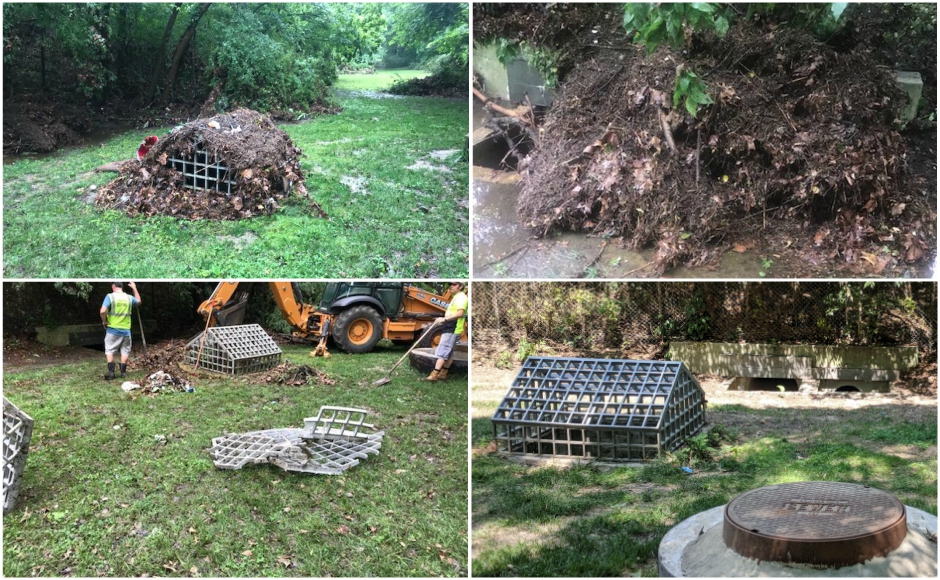 Four photos show the impact of storm damage on a borough stormwater system on Concord Drive. The lower right photo was taken after the cleanup; the other three were taken the day after the storm. Credit: NJPEN.

The borough is also tracking damages sustained by families like the Vespes and Luciottis, and coordinating with the Camden County Office of Emergency Management (OEM) to secure any available federal disaster relief dollars for them. But reimbursement won’t be quick in coming; any relief necessarily must be preceded by a determination of fault, which won’t come before an investigation.

Given the severity of the damage sustained on the street, the difficulty insuring against extreme weather events, and the geography of the block, it’s conceivable that the homes there may not be salvageable in the long term.

“That’s the low point [on the block], and we all know where water goes,” Kasko said. “I’m not sure whether that’s going to be a safe place to build; to have a foundation or a structure. Maybe it’s not. It’s not the first time there’s been damage over there. 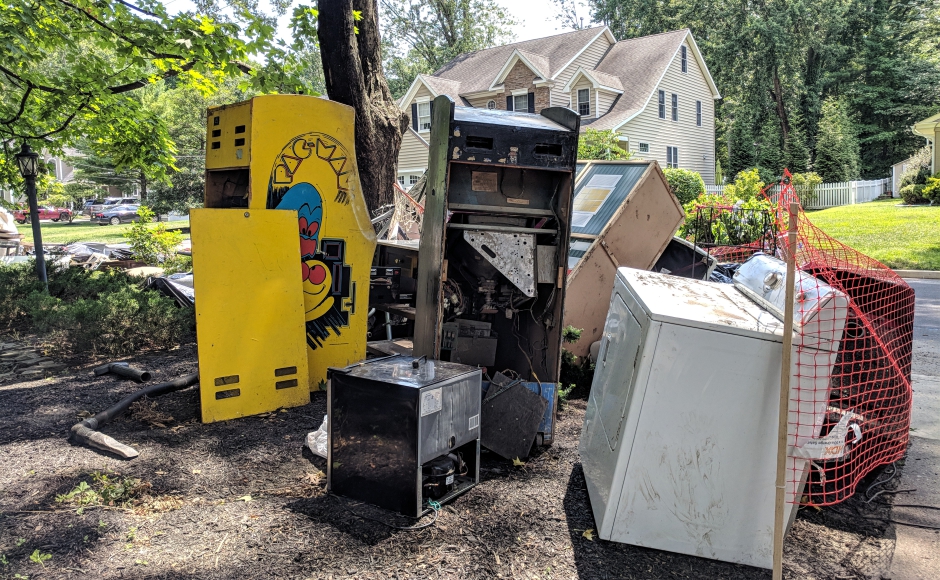 The Vespe family has been living on the lawn of its Haddonfield home, surrounded by their possessions that were damaged in a June 20 storm. Credit: Matt Skoufalos.

Damage from the storms was concentrated in an area that borders Burlington, Camden, and Gloucester Counties, and the three are filing jointly for disaster recovery dollars.

Unofficial estimates put total losses from the event at $12 million across some 90 properties in three counties.

But there’s been no word from the state and federal emergency management agencies on any inbound relief, nor any timeline for the same.

Camden County Emergency Management Coordinator Sam Spino advised that homeowners whose property has been damaged in the storm should “keep files on everything [and]take pictures.” If they’re denied by their insurers, that information could be useful in following up with FEMA.

Spino also said there’s been no word on what type of aid might become available to property owners who’ve suffered a loss; it could be in the form of grants, or low-interest loans. He also declined to estimate how many individuals might have claims to bring, but expressed his sympathies for their circumstances.

“Residents are being very patient, but there’s a lot of frustration,” Spino said. “You can see it. Talking to them breaks your heart. I would love to help people that certainly have been beat up by the storm.”

Spino also worried that there’s no readily available solution for combating the effects of extreme weather. He sees similar patterns in an intense storm that dumped a historic amount of rain on Washington D.C. yesterday in a single hour. Overwhelmed, infrastructure in the nation’s capital buckled—and there’s nothing to stop a repeat performance.

“People have been living in their houses for 30, 40 years and had no problem,” Spino said. “I see this happening again and again, and it’s starting to become repetitive.”