What will it take to pass an athletic facilities referendum in Collingswood? Local, independent pollsters say it’s givebacks for seniors and a $100-per-household cap on annual tax increases.

By Rob Lawrence and Rhodes Mason

The Collingswood athletic facilities proposal that will head to a spring 2018 vote. Credit: Collingswood Board of Education.

In the wake of that vote, we founded the Alliance for Collingswood Athletic and Play Spaces (ALLCAPS).

Our goal was to encourage reasoned debate on this topic, and to help create a coalition to pass a new referendum in the near future.

We began by convening a group of interested citizens in April, and then surveying the community itself in May and June.

The goal of the survey was to shed light on who voted and why they cast the votes they did.

Our survey revealed two distinct sets of issues that are important to citizens: one set for the athletic fields (safety, environmental soundness, reasonable cost, etc.), and another set for elementary school play spaces (equity between schools, adequate shade, greater community access, and more).

We propose working through these step-by-step with our ALLCAPS team as well as with other engaged citizens.

At Collingswood’s May Fair celebration, we conducted street surveys with approximately 50 individuals. In June, we asked about 150 more individuals the same questions via an online survey.

Considering there were almost 3,000 voters in the March referendum, these 200 represent a healthy 6.7% sample of the electorate (for perspective, this is more than 13,000 times the size of the .0005% samples typically used in the United States to forecast Presidential elections).

With fall arriving, students back in school, and education once again top-of-mind, we would like to present the results of our survey and the conclusions we have drawn.

We believe we have uncovered four keys for passing a new athletic and play spaces (APS) referendum. Below we present these keys, our interpretations, and our summary data.

Residents discuss a proposed stadium project at the Collingswood Board of Education meeting. Credit: Matt Skoufalos.

1. Budget for a tax increase of $100 per tax-paying household per year.

About 80% of our respondents said they would be willing to pay $100/year in additional taxes to support an APS referendum.

Seventy-four percent of respondents would not support a tax burden of $219/year, the estimated average burden in the March 2018 referendum.

Senior citizens are often on fixed incomes, and are concerned about rising taxes that could drive them out of their homes. They do not typically have school-age children, and do not stand to benefit directly from school improvements.

This situation is common everywhere, but in 2018 Collingswood, it is particularly acute. The town’s commercial rehabilitation has raised property values and created extra financial pressure on longtime residents who are at or near retirement age. Forty-three percent of voters in March were aged 58 or older, compared to about 26% in the five previous general and special elections.

Seniors are mobilized against tax increases, and cannot be demobilized. To pass, a new referendum needs to provide real, substantive benefit to seniors: activity and community opportunities that they value, and cannot get by other means. 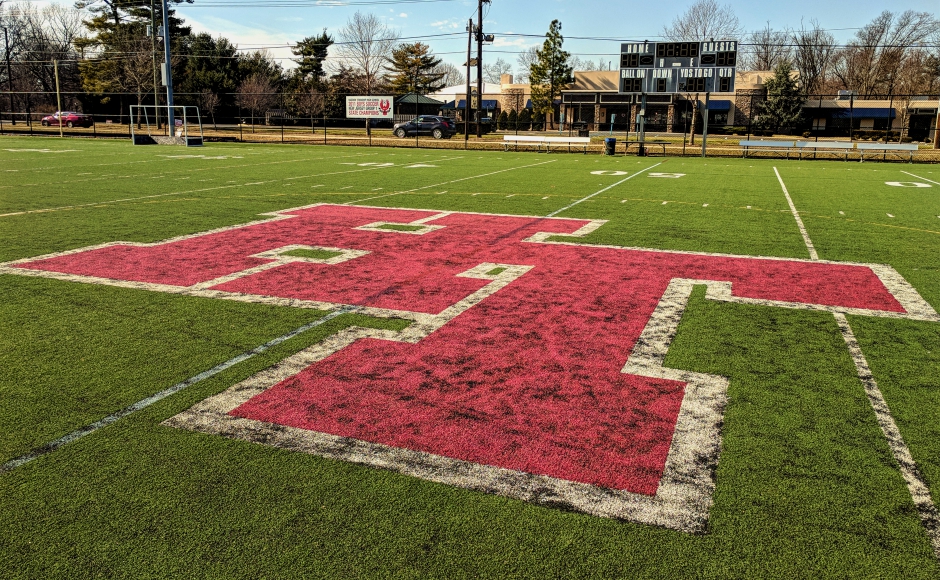 Haddon Township’s Recchino Field, prior to a 2018 overhaul of its artificial playing surface. Credit: Matt Skoufalos.

3. Find a compromise on artificial turf.

About 32% of those surveyed are opposed to artificial turf on environmental grounds.

Our survey did not delve into the details of this objection.

Opposition to turf could be based on anything from ideology to hearsay to sound scientific knowledge; it is simply unclear.

Regardless, the next referendum should be preceded by a detailed hearing and Q&A on the topic of artificial turf, with experts presenting on the differences between various types, known risks, comparison of those to the risks of natural grass, and so on.

Artificial turf cannot and should not be simply removed from consideration. Collingswood is short on space, and sports have changed dramatically since the 1930s when the football stadium was built. There are more sports and more participants (most notably, more girls teams) today.

The town’s grass fields are taking a beating from continuous, year-round use without recovery time. Turf could help resolve this dilemma, and it deserves further examination.

Fifty-four percent of those surveyed said the March referendum did not incorporate enough community input.

The Board of Education held a “World Cafe” event in September and October 2017, specifically to solicit citizen opinion.

But the issues raised at the event were not systematically addressed by the referendum.

Instead, many citizens felt their input was invited, but then ignored. To pass, the next referendum will need to logically and carefully address issues that citizens care about, plus “show the work” of how citizen input was translated into a plan.

On behalf of the Board, ALLCAPS offers to maintain an online Frequently Asked Questions (FAQ) site about the project, plus a fact base with links to sources for topics like artificial turf. We believe this measure will increase trust and help lead to a successful referendum.

We are open to critiques of both our survey and our conclusions. Click here for a summary of the survey findings. For a copy of the raw, anonymized survey data, please e-mail us here.

The authors are Collingswood residents and cofounders of the local citizens action group, ALLCAPS, an ad-hoc entity created to study variables around the failed Collingswood Schools athletic bond referendum of March 2018.