Under terms of a proposed shared services agreement, neighboring Audubon could take over Haddon Heights Public Works duties as early as February 2020. 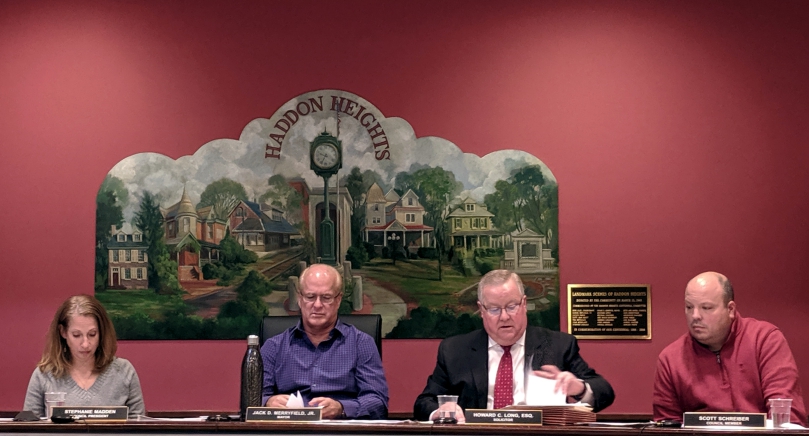 The degraded condition of its equipment and cutbacks that halved staff from 15 members to eight in 2008 have finally caught up to the quality of service it can perform, Long said.

“It’s not about how our guys do; our guys do great,” he said. “It’s about the ability to fund capital purchases.

“We don’t have the equipment to do the job,” Long said. “Audubon does.”

As a result, the local government is considering a four-year agreement to outsource DPW services to neighboring Audubon, with which Haddon Heights already shares a Superintendent of Public Works, David Taraschi.

The terms of the deal are still being framed out, but both communities anticipate some $250,000 in mutual savings in the first three years of a contract that would run from February 2020 through the end of January 2024.

“It’s better than a break-even for us,” Long said.

Haddon Heights would pay Audubon $844,000 in the first year of the agreement, with a 2-percent annual increase. Each side has the option to kill the deal after one year with at least 60 days notice, and at the cost of a $50,000 exit penalty.

Under the current proposal, Audubon would oversee a public works department serving the needs of both communities on several fronts, including: street, sewer, and storm water repair and maintenance; snow removal, leaf collection, and shade tree maintenance; building and grounds maintenance; clean-up after social events; and sanitation and recycling, aside from residential curbside collection, for which Haddon Heights is already contracted to an outside provider. 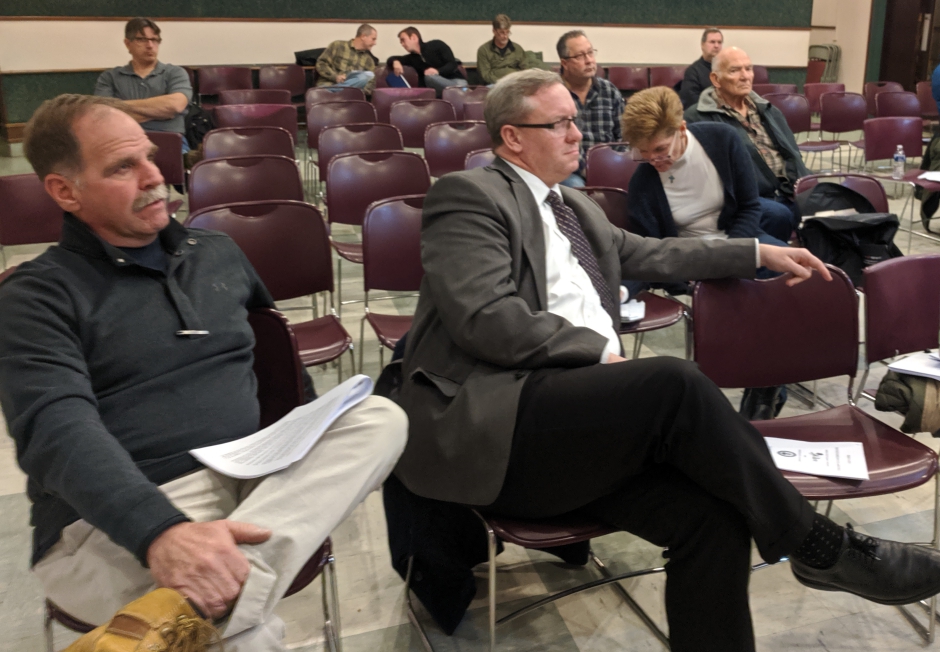 All recycling costs and revenues would remain with their communities of origin.

The current roster of Haddon Heights DPW workers, a staff of five full-time and three part-time workers, would be dissolved under a workforce reduction.

All would be eligible to interview for those positions in Audubon, which has pledged to hire eight additional employees in the expansion of its services.

Haddon Heights would retain ownership of and insurance responsibilities for all its facilities, vehicles, and equipment, and any unused equipment may be auctioned off. All new vehicles would be labeled as Audubon DPW serving both boroughs.

The plan also mandates that Haddon Heights would not be liable for any capital contributions in first three years of the agreement; separate agreements would be established for future capital purchases. By year four of the deal, both sides would discuss whatever equipment purchases might be necessary to continue the agreement, and would share the costs of each.

Based on those figures, the DPW merger would equate to $1.1 million in savings for Haddon Heights, Long said. 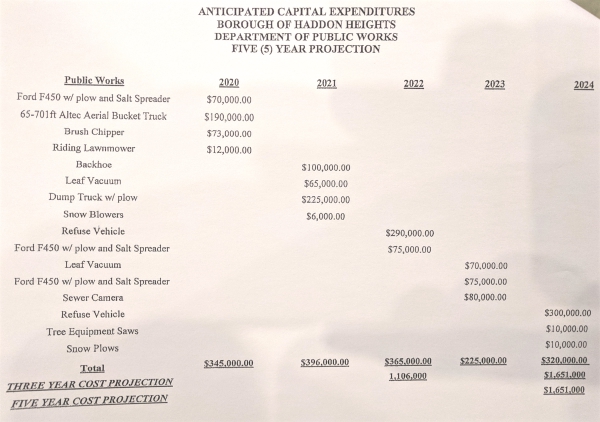 Both communities expressed interest in making sure the deal delivers a high quality of service for their residents.

“Built into any program are guarantees that Haddon Heights residents wouldn’t be treated as second-fiddle,” Long said.

“Dave [Taraschi] has been one of the best professionals in public works for decades,” Jakubowski said. “He’s got a vision in place, and I support that vision.

“I am confident with the guys we have, and the leadership we have, that we will not see a drop in service,” he said. “We’re excited to see the possibilities.”

Jakubowski also said he’d like to establish a joint-community DPW performance assessment committee that will meet semi-annually to see that the deal is working well.

The current staff of 20 in Audubon would be deployed differently to deliver “an equal benefit to both communities,” because the department has a number of specialized workers, Taraschi said. 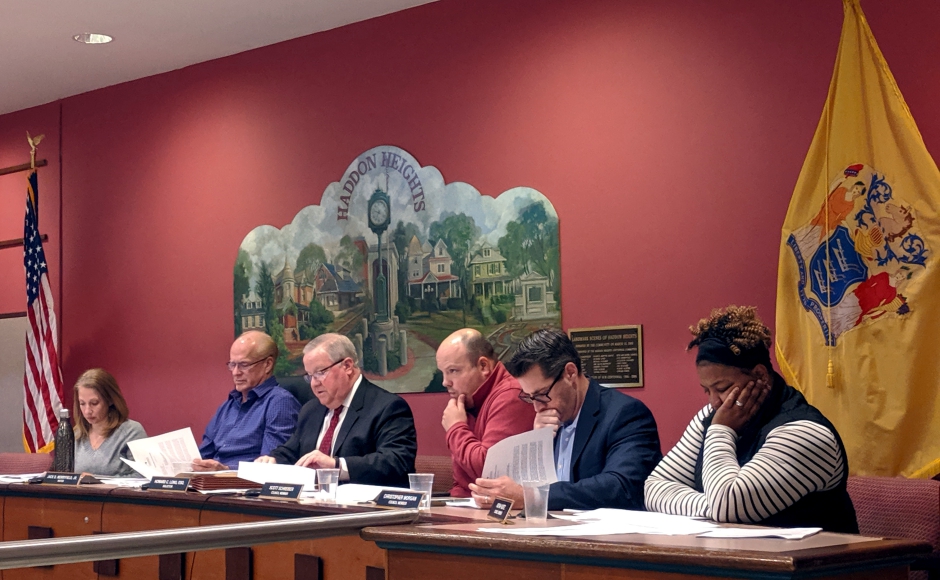 Haddon Heights Council members voiced their support for the plan while praising Taraschi’s performance to date as the DPW Superintendent of both communities.

“We as a town had no way to properly fund [these capital purchases],” said Councilman Scott Schreiber.

“Our tax rate was low, our capital was pinned, and we were in a concerned place. Thank goodness our friends in Audubon guided us at that time.

“This [plan]  does make sense to me for the borough because there’s considerable savings,” Schreiber said. “If we had all the money in the world and brand new streets and brand new sewers, I wouldn’t be thinking about this. If you look outside your homes, that’s not the reality.”

“This is a thing that makes Haddon Heights clean and livable,” said Councilwoman Asiyah Kurtz. “It’s something that has to be invested in. This seems to me to be a very difficult but clear decision that needs to be made.”

“Moments after I was sworn in it became clear to me that DPW was going to require a tremendous amount of our time and focus,” said Council President Stephanie Madden.

“We were very grateful that Audubon and Dave Taraschi came in to help us. We really needed the help.”

Mayor Jack Merryfield and Councilman Chris Morgan both assured the public that the deal hadn’t yet been finalized, and that all discussions would be held in a public forum.

“None of this is being done in a backroom deal,” Morgan added. “We want everyone to know where we stand on this issue.” 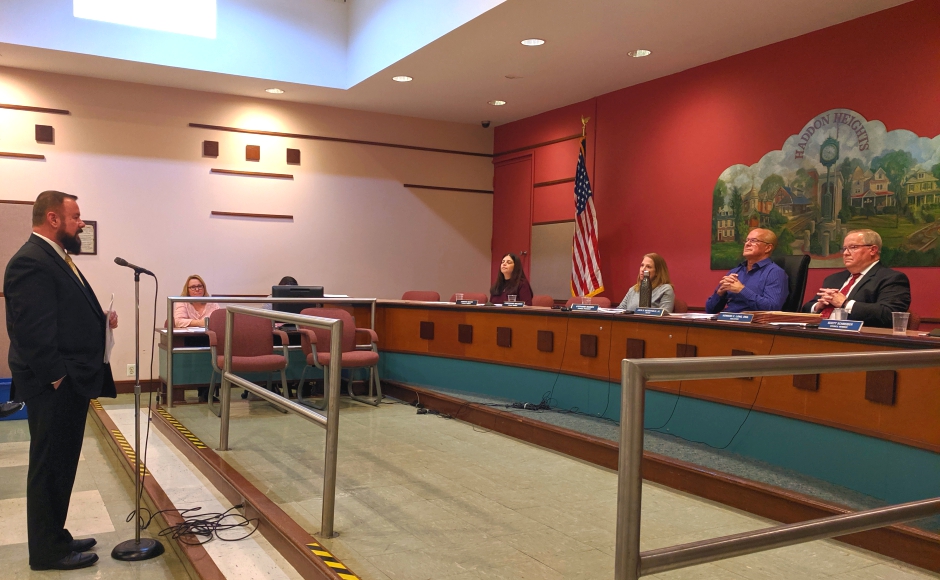 The loudest objection to the plan was voiced by David Tucker, General President of the Government Workers Union (GWU).

Tucker criticized the track record of “all the shared services agreements in NJ.

“All of them are based on inflated numbers, and inflated savings, and a lot of well-intended fantasy,” Tucker said.

“If you make up high numbers and unreasonable turnaround of equipment, you can justify equipment costs all day long, and artificial savings.”

Tucker further warned that if the deal collapses, Haddon Heights would face the “impossible” task of rebuilding its entire DPW from scratch.

“You don’t have anyone to run your public works now,” he said. “If you were to become disenchanted with their services, your startup costs would be impossible.”

Tucker told council “It’s illogical and a fantasy to believe that the administration of Audubon will put you on the same level as their municipality,” claiming, “You will always be the stepchild.”

Jakubowski countered by pointing out the number of shared-service agreements under which Audubon currently operates, including its borough clerk, municipal court, and group purchasing agreements.

“There’s no perfect time [to do this],” he said. “These are things that towns have to be doing, have to be considering. We’re choosing to be ahead of the curve.”

Click here to support our work with an NJ Pen subscription.