The debut effort from Endrit Bodi brings in European chef Artur Haxhiu in a Romeo-and-Juliet-themed flip of the former Little Tuna space in Haddonfield. 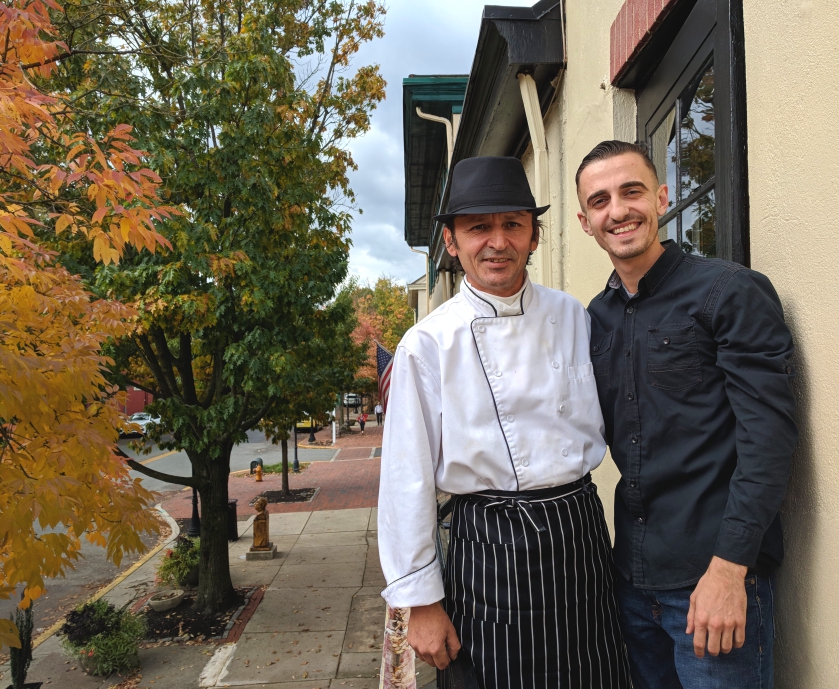 If the wide, colonial-era streets of downtown Haddonfield have ever reminded you of a European piazza, consider your impression validated by a continental native.

“Haddonfield is so much European,” said restaurateur Endrit “Andrew” Bodi.

When he first came to South Jersey to work in the food industry, the 24-year-old Albanian would take his meals at the Bistro, and stroll along Kings Highway afterwards.

It reminded him of places in Croatia, France, the Czech Republic.

And when Bodi looked up at the balconettes of the former Little Tuna at 141 Kings Highway, his mind’s eye saw Verona, the Italian city made famous in Shakespeare’s Romeo and Juliet.

So for the first opportunity at the helm of his own establishment, Bodi borrowed the name.

“I was walking with my brother, and saw the balcony of the building, and thought, ‘It’s perfect,’” Bodi said.

That was this summer. With the help of his cousin, Ergys Rrakaj, who owns the Jersey shore eateries La Finestra and A Moda Mio in Sea Isle City, and La Padella in Ventnor, Bodi brokered a deal for the vacant storefront.

Then the family set to work overhauling its interior, from the flooring to the roof, and everything in between. 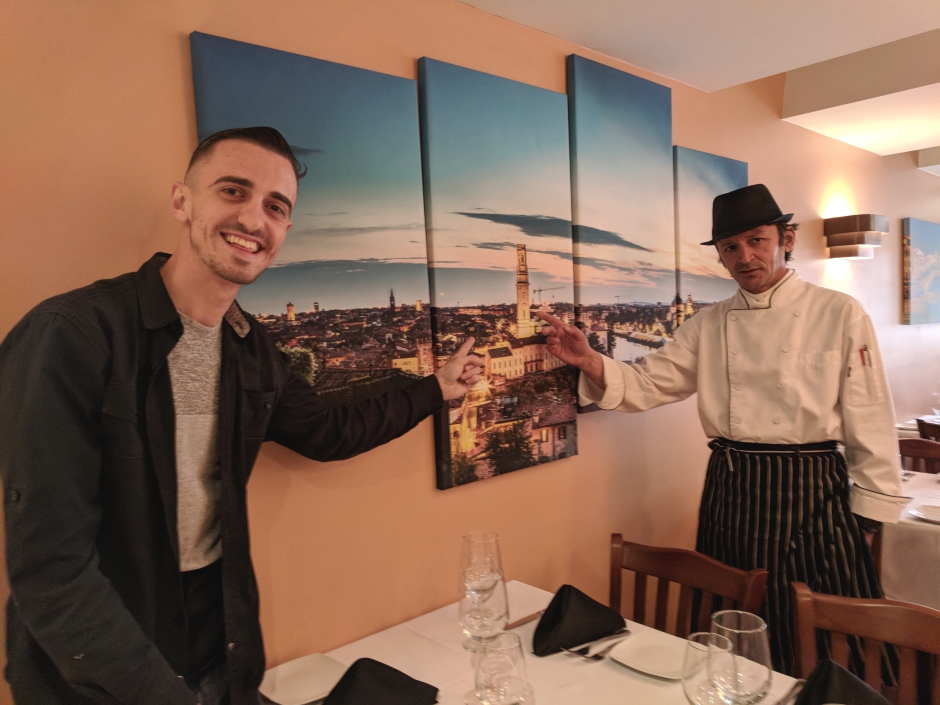 Endrit Bodi (left) and chef Artur Haxhiu pose with a triptych of Verona in their Haddonfield restaurant of the same name. Credit: Matt Skoufalos.

On Thursday, November 1, Verona will open its doors to the public for the first time.

Bodi honed his restaurant chops at those shore eateries, working front of house in-season, and wintering in the kitchen at Angelo Lutz’s Kitchen Consigliere in Collingswood.

Ambitious and hard-working, he socked away his earnings, and soaked in the experiences of the food business.

“I was dealing with customers, signing orders, hiring people. I thought, ‘I could do this.’”

Despite the effort, he’d tried to come to terms with 10 different restaurant brokers before he had earned enough and learned enough to get into the Haddonfield storefront.

In the meantime, Bodi continued work on an undergraduate degree in law and criminal justice at Temple, more for the immersion in American history, politics, and culture than any career pursuits.

“I was trying and I was improving,” he said. “I really wanted this place, and I put in the effort. My dad and my mom helped me out; I really have to take this place over.” 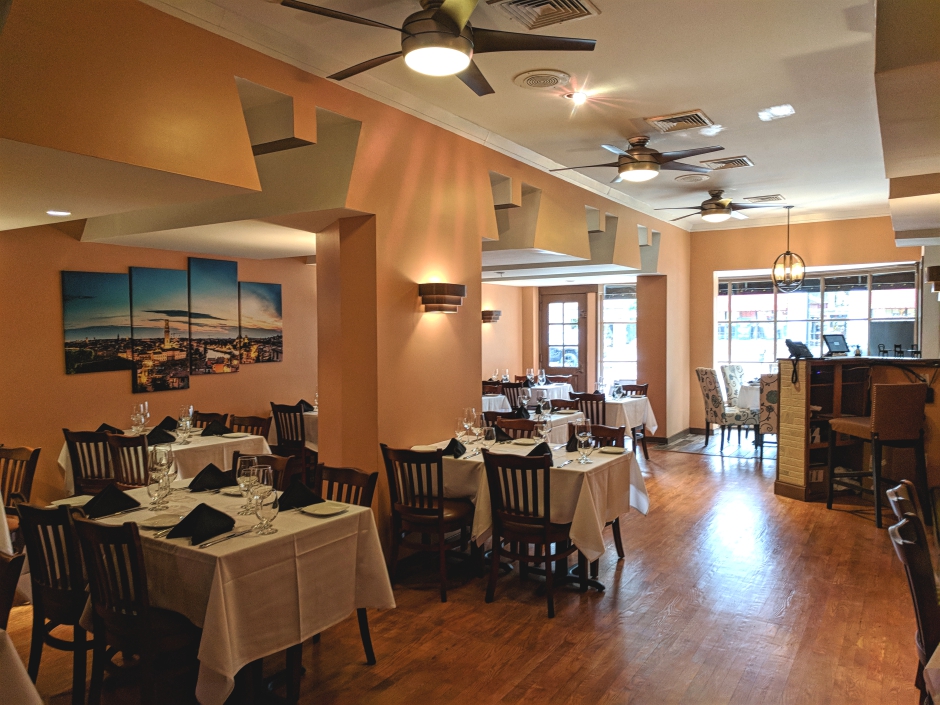 To Bodi, Verona will fill a few niches in downtown Haddonfield: a fine dining restaurant for date nights, and an affordable, cloth-napkin, express lunch for businesspeople.

He’s banking on the extensive experience of international chef Artur Haxhiu to communicate that vision.

Haxhiu is a 35-year chef, trained in Italy and Greece, who’s worked in kitchens in seven countries throughout Europe.

Nicknamed “Sparrow” for his itinerant career and a black fedora that he says hearkens to Johnny Depp’s Pirates of the Caribbean character, Haxhiu wants to create “something real” for guests of Verona.

“Usually [American] Italian restaurants want [their menu]  to fit with other cultures, so they modify it; they change it,” Haxhiu said. “I will be real in what I cook.”

Haxhiu’s plan is to create seasonal dishes that rotate through different Italian regional cuisines as fresh ingredients are available. Verona will open with a focus on Sicilian dishes, and then switch to Piedmontese over the winter. Ingredients will be locally sourced, complemented with certain imported delicacies. 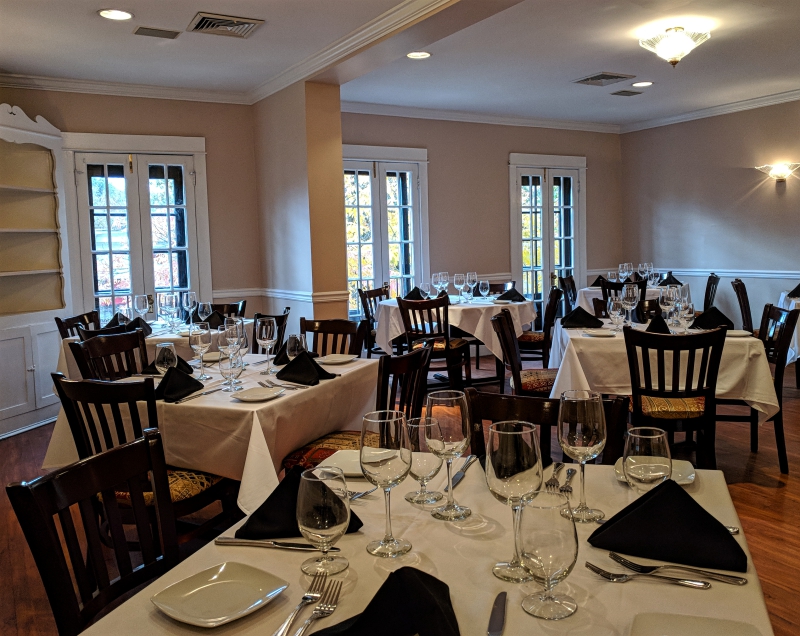 The second-floor dining and banquet room at Verona in Haddonfield. Credit: Matt Skoufalos.

“The Italian kitchen itself is very easy,” Haxhiu said; “it’s a family cuisine.

“Everything is based on fresh products.

“I’m trying to work as an artist,” he said. “I just want to be appreciated.

“As long as the owners respect my work, that’s who I cook for.”

With seating for 120 on two floors, Bodi expects that the overhauled eatery will be busy for both weekday and weekend diners.

The interior has been rejuvenated with a contemporary look on the lower level, and a more classic, fine-dining atmosphere on the second.

White tablecloths, black napkins, and a partnership with Heritage Winery signal its aims at private events and a fine dining crowd. Bodi promised the “service is going to be great and professional.

“I’ve seen my family succeed, and I have their support to bring what they have up here in Haddonfield,” he said. “A lot of [line]  cooks are going to come from down the shore and bring their experience as well. I think there’s enough experience to make people happy.

“As long as we do a good job, and take care of our customers, we’ll make it.”