Trending
You are at:Home»Police & Fire»Woodlynne Police Officer Pleads Guilty to Simple Assault in Pepper-Spray Case, is Banned from Police Work

As a condition of his sentence, 32-year-old Ryan Dubiel of Wenonah is barred from holding public office in New Jersey, including law enforcement work.

A Woodlynne Police officer who was charged with simple assault in an unprovoked use-of-force incident last summer has accepted a plea deal in the case that will remove him from law enforcement work altogether.

Thirty-two-year-old Ryan Dubiel of Wenonah was sentenced to a year of probation and ordered to have no contact with the victims in the case, as well as forfeiting his patrolman position with the department.

According to the terms of the deal, Dubiel is also prohibited from holding any public office in the state of New Jersey, including any future employment as a police officer, the Camden County Prosecutor’s Office (CCPO) reported Thursday.

He had been suspended without pay while the case proceeded through the legal system.

On June 4, Woodlynne officers were dispatched to a home in the 200 block of Parker Avenue for an unspecified complaint. Footage from Dubiel’s body-worn camera shows his partner, Officer Tirik Clouden, asking the residents there for their names so he can document the encounter.

Dubiel can be heard telling one of the residents, “Put the phone down. I’m not having you text people to come up here.”

When the residents object, Dubiel can be heard seemingly trying to bait them into an encounter, saying, “What are you gonna do?” repeatedly. Finally, he orders one of them, “Put your hands behind your back,” before unleashing Oleoresin Capsicum (OC) spray on them in a way that the CCPO eventually determined “was not consistent with the State of New Jersey use-of-force policy.”

“You guys wanna play games, right?” Dubiel is heard to say, spraying the residents on their porch, and pursuing one with the pepper-spray as he flees the block, at which point Dubiel yells, “Bitch” after him, and radios in that he has a group of people “failing to disperse.”

Other footage from the residents’ perspectives (above) shows a similar version of events.

At the time Dubiel employed the spray, the residents “were not observed physically resisting or attempting to harm others or themselves,” the Camden County Prosecutor’s Office (CCPO) said in a statement at the time.

As a result of the encounter, Dubiel was charged with two counts of Simple Assault. He is the second Woodlynne Police officer to have been fired from the department since 2010.

Before joining the Woodlynne Police, Dubiel’s career also included two-and-a-half years with the Camden Metro Police, which in 2015 issued him an award of valor for stopping an assault on a woman in New York City while he was off-duty.

According to the NJ.com Force Report, Dubiel’s service record with Camden Metro notes 15 use-of-force incidents, 60 percent of which resulted in suspects being injured. 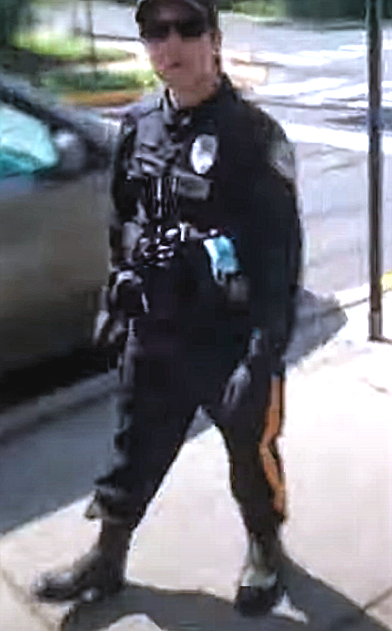 Dubiel spent six of his 10 active-duty months in Woodlynne on administrative assignment after having shot a suspect fleeing the scene of a gas station robbery in December 2019.

Woodlynne Public Safety Director Ed Figueroa said in June 2020 that Dubiel had been pressed into patrol duty only after the department had been short-staffed due to the novel coronavirus (COVID-19) pandemic.

All officer-involved shootings are investigated by the CCPO; at press time, it was not clear whether Dubiel’s forfeiture of his position would resolve that matter as well.

In a statement accompanying the plea agreement, Acting Camden County Prosecutor Jill S. Mayer said the deal “is a guarantee to the public that [Dubiel]  will not serve in any position of public trust in Camden County or anywhere else in the state.

“We hope this serves as a reminder that no one is above the law and we take all accusations and abuse of power seriously,” Mayer said.

Woodlynne Mayor Joseph Chukwueke declined to comment on the matter.