Trending
You are at:Home»Police & Fire»Collingswood»Attorney: Collingswood Coffee Shop Owner “Forced to Defend His Wife and Himself” in Shovel Assault Case

A lawyer for Cup of Bliss owner Brian McBride says McBride was defending himself when he struck a chef at a neighboring business in the head with a shovel Monday. Others dispute that account.

A Collingswood business owner who allegedly struck a chef at a neighboring business in the head with a shovel during an argument claims he acted in self-defense, according to his lawyer.

Brian F. McBride, 42, of Washington Township, was arrested Tuesday on assault and weapons charges stemming from a confrontation outside of Cup of Bliss, the Collingswood coffee shop he owns with his wife, Deborah Blissick.

The Camden County Prosecutor’s Office (CCPO) reports that Collingswood Police officers responding to the scene around noon on Monday “found the victim on the ground suffering from a wound to the head.”

According to CCPO, eyewitness accounts and surveillance footage allegedly show that McBride wielded a shovel in the incident. The victim was transported to the hospital for stitches, and reportedly sustained a concussion.

McBride, however, alleges that he acted in self-defense, according to a statement issued to NJ Pen by his attorney, John Zohlman, of the Cherry Hill-based law firm Hagner and Zohlman, LLC:

Ms. Blissick owns and operate[s]  Cup of Bliss, a coffee shop in Collingswood[,]  for a number of years. It has enjoyed great success and loyal patronage. Unfortunately, issues have arisen with an adjacent property owner and its tenants which have adversely affected my client’s business operations.

Efforts by Dr. McBride to have these issues addressed by local authorities were unsuccessful[,]  and subsequently, he and his wife have been subjected to numerous threats and harassing behavior[,]  which has also been reported and is presently under investigation.

Last week, Paris Young, an employee of the adjacent business, entered the coffee shop solely to harass and threaten Ms. Blissick. Dr. McBride was not present. On August 3rd, 2020, he subsequently approached Dr. McBride while on coffee shop property and berated him. He was ranting and raving and because he was not wearing a face mask, was spitting in their direction and upon them.

He was asked by both Dr. McBride and Ms. Blissick to leave their property immediately[,]  and which was apparently recorded. He proceeded to “chest bump” Dr. McBride towards the basement steps. He thereafter aggressively pursued my client who was retreating into the basement. My client thereafter was forced to defend his wife and himself[,]  and did so appropriately and reasonably.

McBride pleaded not guilty to the charges against him, and “looks forward to complete vindication,” Zohlman wrote, adding that harassment and assault charges “will be pending” against Young for his role in the conflict.

Young is a chef employed by Macona BBQ, a restaurant situated next door to Cup of Bliss. Macona owner Cory Reuss said McBride’s story contradicts his understanding of both the events of the day and of the longstanding issues McBride has had with various neighbors on the block.

Reuss said Young did visit Cup of Bliss “weeks ago,” as noted in McBride’s account, not to harass Blissick, but to ask why her husband had called the health department on the restaurant instead of talking with them about any concerns.

Reuss further alleges that McBride consistently calls local police to complain about vehicles parked in front of Macona, Cup of Bliss, and other neighboring businesses on the block.

“We have tried to reach out to them numerous times, only to get no response,” he said. “I approached Brian myself, and he denied he was calling the police and said he had no idea what I was talking about.” 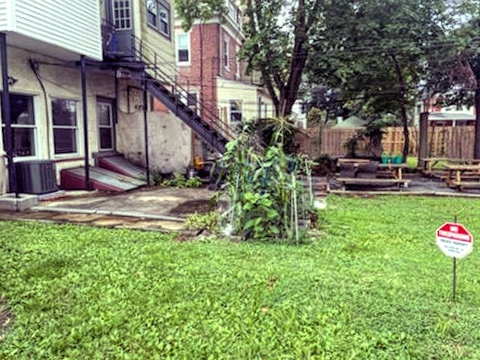 The rear yard of Cup of Bliss and Macona. Cup of Bliss has no direct egress to the yard save its cellar, which adjoins that of Macona. No Trespassing signs prohibit movement among neighbors on the adjoining properties. Credit: Cory Reuss.

Reuss also said McBride’s version of Monday’s events—that Blissick was endangered in the encounter—don’t add up.

According to him, Blissick was inside the coffee shop and uninvolved in the confrontation until the end, at which point she allegedly screamed “Stop it!” through a screen window, as her husband reportedly struck Young with the shovel.

The shop has no direct access to the backyard, save through the cellar steps, near which the confrontation took place.

Previous encounters among McBride and other tenants on the block have led landlords to post “No Trespassing” signs to prevent him from roaming the rear yard of the adjoining properties, Reuss said.

As Cup of Bliss has no easement to use the rear of the property and no doorway to the backyard, the only way McBride could have encountered Young would have been by emerging through the cellar, which opens beneath a stairwell to residential properties above their businesses, or by violating the no-trespassing order, he said.

Reuss also challenged the notion that Young would have been close enough to “chest-bump” a retreating McBride, but not to defend himself against a shovel swung at his head.

“So you were retreating in the basement and found a shovel, and then all of a sudden came out of the basement, and grabbed a shovel, and Paris never put his hands up?” Reuss said. “Even if he chest-bumped you, you hit him with a shovel?” 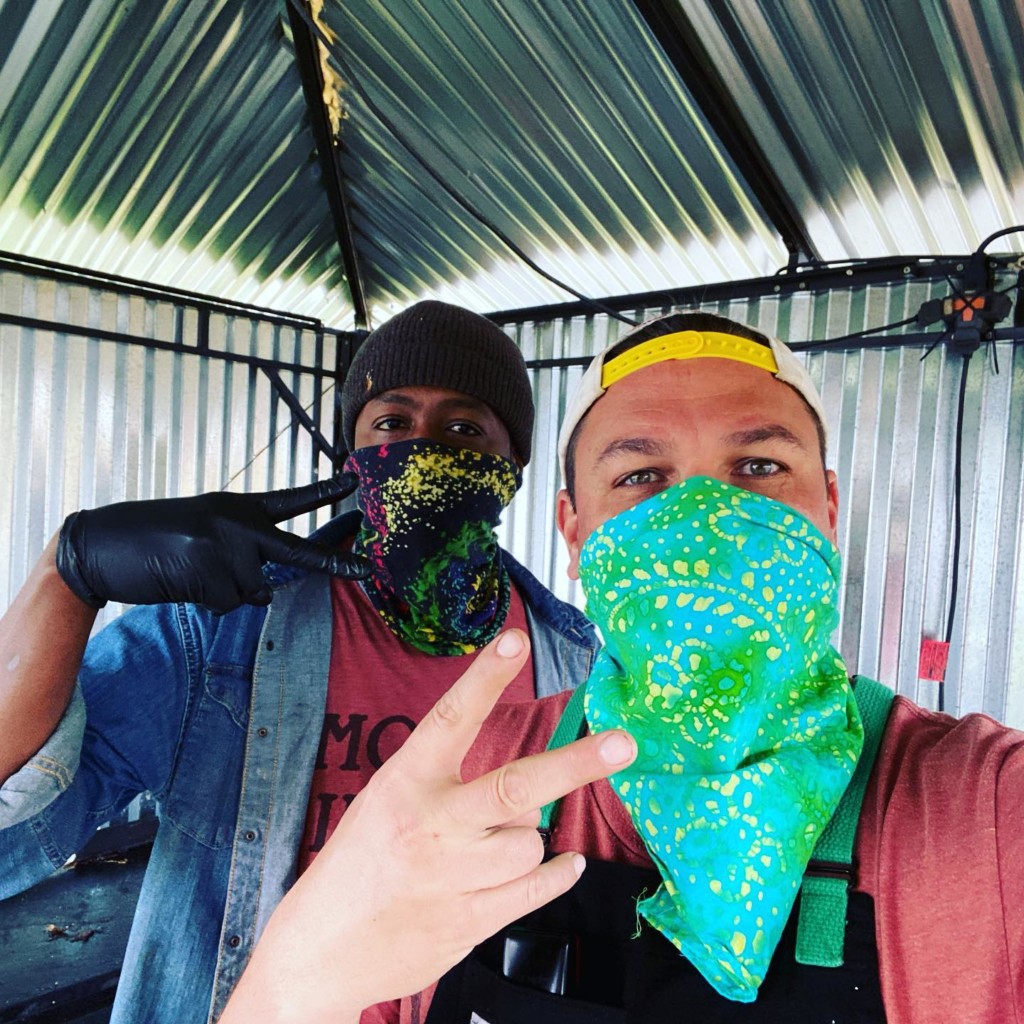 Neither does McBride’s version of events match an eyewitness account of the attack, in which no physical contact was observed between Young and McBride prior to the shovel allegedly being swung.

“One thing I can say for sure is that Paris wasn’t brandishing anything,” the witness said.

“He didn’t have a closed fist, as if he were going to hit him. He had his phone in his hand.

“[McBride]  seems to be the aggressor in all these situations,” a neighbor said.

“He’s easily agitated and easily frustrated, and turns that around into other people being the aggressors.

“People have just gone in to have a civil conversation, and it’s gone from zero to 100,” the neighbor said.

According to authorities, McBride was arrested and charged Tuesday. Upon condition of his release, he is to have no contact with Young, and is prohibited from returning to the area of both businesses while the matter is pending before the courts.