Locally, 14,402 people have been infected by the virus and 588 have died from related complications, as the county set a single-day record high of new positive cases for the second time in five days. 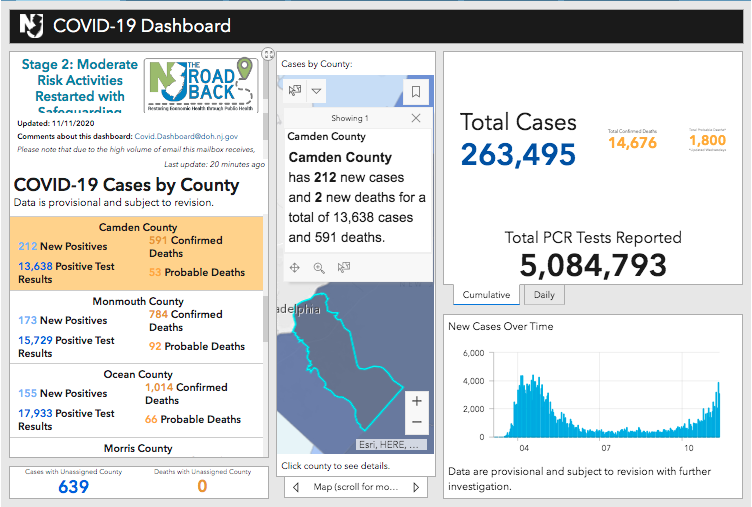 Another seven Camden County residents have lost their battles with novel coronavirus (COVID-19), and 400 others have tested positive for the virus since Monday, according to reports from the Camden County government.

That brings the local impact of the pandemic to 14,402 infected residents and 588 related deaths.

In a written statement Wednesday, Camden County Freeholder-Director Lou Cappelli noted that hospitalizations in the United States similarly reached their highest point of the pandemic on Tuesday.

“Although deaths have not increased at the same rate as cases to this point, we should not be fooled into thinking that this crisis is under control,” Cappelli said.

The most recently deceased are:

“No one up here wants to take the type of broad, all-encompassing actions we had to take in March,” Murphy said. “We have to snap back into reality,” he said.

“This virus has not gone away, and it’s posing it’s greatest threat to us in recent months.”

To prevent large-scale shutdowns this winter, Cappelli urged residents to return to the vigilance of the spring.

“The lack of a stay-at-home order should not be interpreted as an invitation to go out, see friends, and party,” he said. “Stay home as much as possible, wear a mask, and take every step you can to control this pandemic.”

On Thursday, Cooper University Health Care will open a new drive-up COVID-19 testing site in the parking lot of Camden County College in Cherry Hill (1889 Marlton Pike East, or the corner of Springdale Road and Route 70).

Throughout New Jersey, 263,495 people have been sickened by COVID-19, and 14,676 have perished from causes related to the virus. In addition to those lab-confirmed fatalities, the state also recognizes another 1,800 probable COVID-19-related deaths.

Long-term care (LTC) facilities account for almost half of all deaths in the state and one-sixth of those infected, and new cases continue to occur there.

LTCs are believed to be associated with 60 percent, or 348 of 588 total deaths in Camden County: 345 were residents and three were staff.

At this time, 51 of the 56 LTCs in Camden County have experienced at least one case of COVID-19.

According to the New Jersey Department of Health COVID-19 dashboard, on November 11, Camden County was seventh in the state in new COVID-19 cases, with 212.