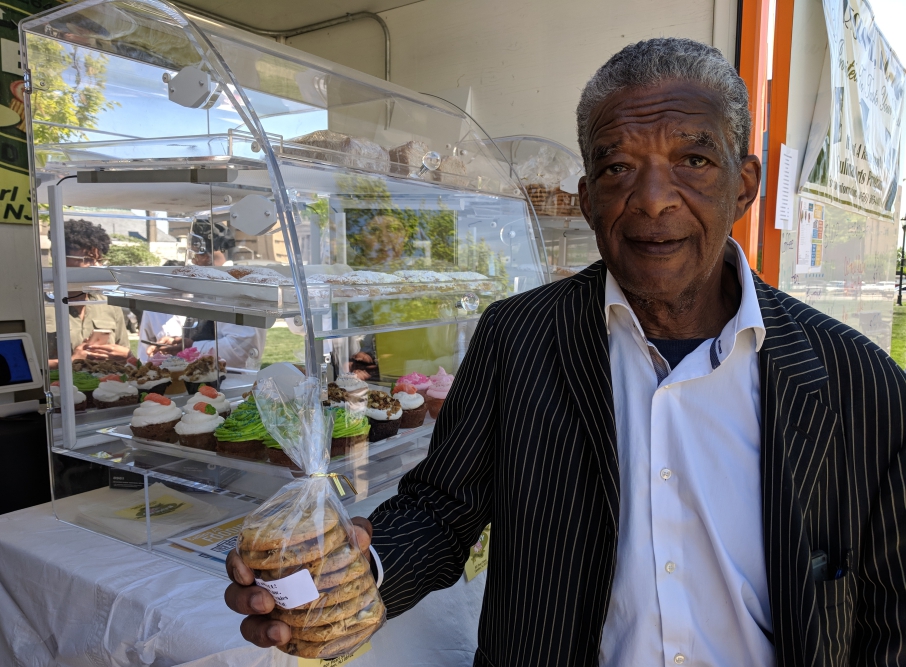 The Camden Cookie is the brainchild of pastry chef Kendall Elliott: a double-chocolate-chip cookie that mixes dark and white chocolate chips.

It’s the signature bakery item from the Respond, Inc. bakeshop, said executive director Wilbert Mitchell, and one of its most popular items.

Mitchell and Elliott are hoping that it can find an even broader audience in an expanded location: its pop-up Lunch Box Café at Roosevelt Plaza Park in downtown Camden.

Respond, Inc. handles the Lunch Box 9 a.m.-to-2 p.m. coffee and pastry stand, and a lunch cart from Cathedral Kitchen (CK Café Lunch Box) runs from 11 a.m. to 3 p.m. Both are contracted at the site through October. 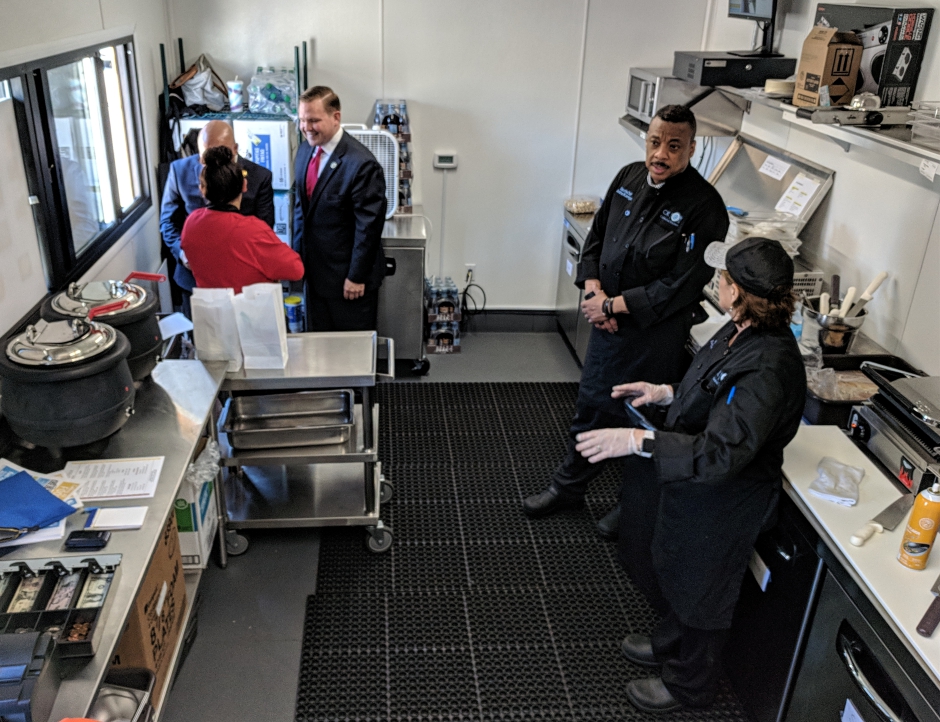 “Putting a bakery and coffee shop at the hub of all that activity is going to bring us closer to the community,” said Respond, Inc. executive chef and culinary instructor James Bacchues.

“We’d like for it to be a draw for people visiting the city, and we’re hoping over the summer it develops into this coffee stand,” Mitchell said.

Both Cathedral Kitchen and Respond, Inc. run culinary training programs as components of an array of services.

The two organizations prepare hundreds of thousands of meals annually for some of the most vulnerable populations in the city, and work to combat its housing and homelessness issues.

Cathedral Kitchen executive director Karen Talarico said the Lunch Box project is “a natural extension of some of the social enterprise ventures” for which each organization is known. 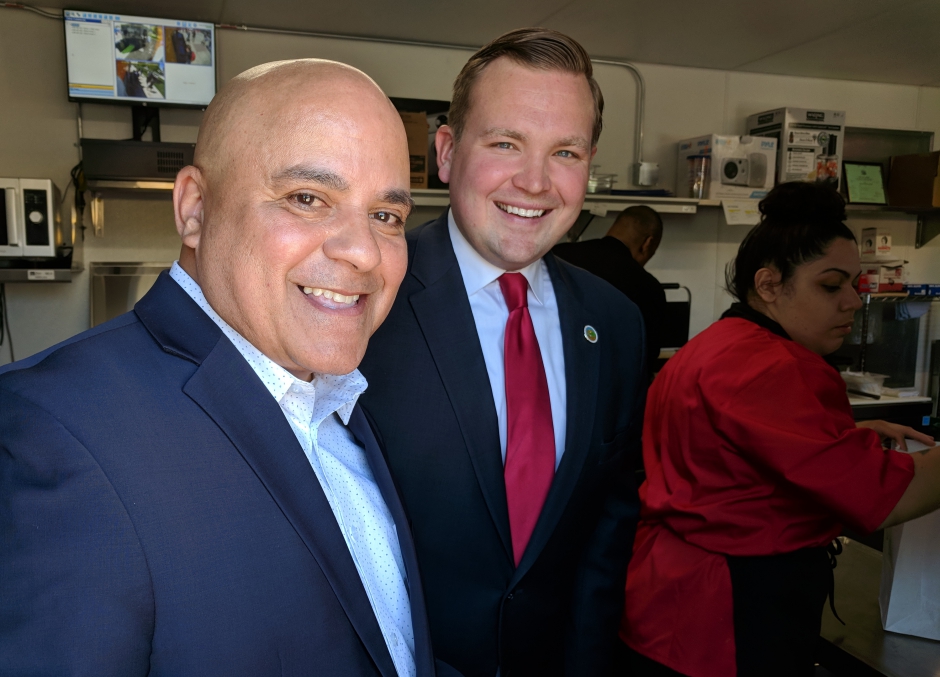 “One of the things we have always focused on is creating more jobs in the city of Camden,” she said.

“We thought it was an interesting idea to create a little grab-and-go lunch spot in the city.”

The Rowan is a turkey sandwich with spinach, apple, gouda, honey mustard, and cranberry relish, also on multigrain.

There are soups, salads, and snacks; no individual item is more than $9.

“My goal is to do a minimum of 30 covers a day, but there’s potential to do a lot more,” Talarico said. “It’s really a new endeavor for us.”

The UEZ project was initially proposed as a fine-dining waterfront restaurant in the Ferry Terminal Building, but as redevelopment of that area escalated, it was repackaged to activate the public park outside of City Hall. 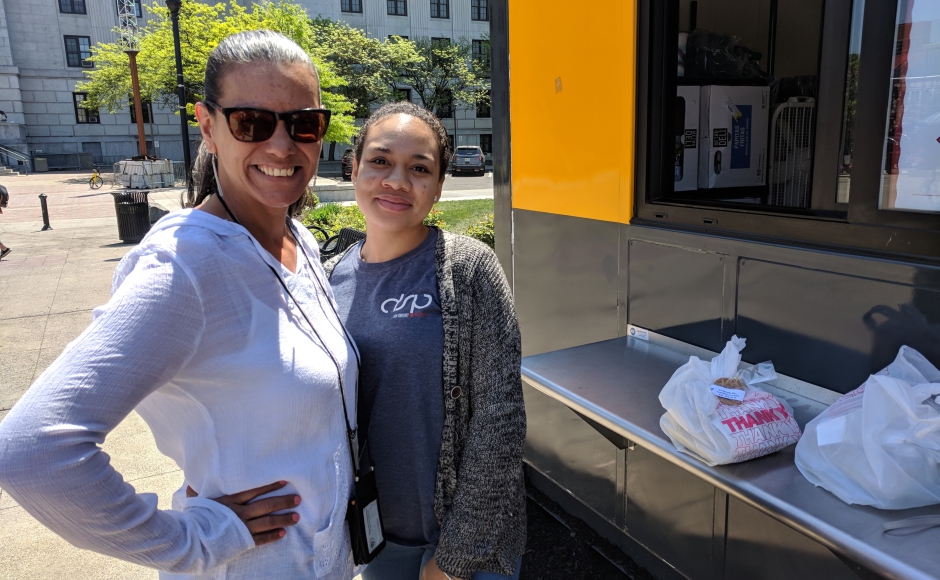 Moran said he thinks the project will “start creating that downtown atmosphere” that the city has been lacking, and tell its workers, “It’s okay to come out of your offices for lunch.”

He promised additional programming to follow at the plaza, including live music.

“We want to bring the amenities that are seen in other cities,” Moran said. “I’m confident it will succeed.”

Among the first to grab lunch from the cart were officemates Liz Hernandez and Arlette Leyba of the nearby Camden County Center for Law and Social Justice. If they are the target market, then the project is already succeeding. 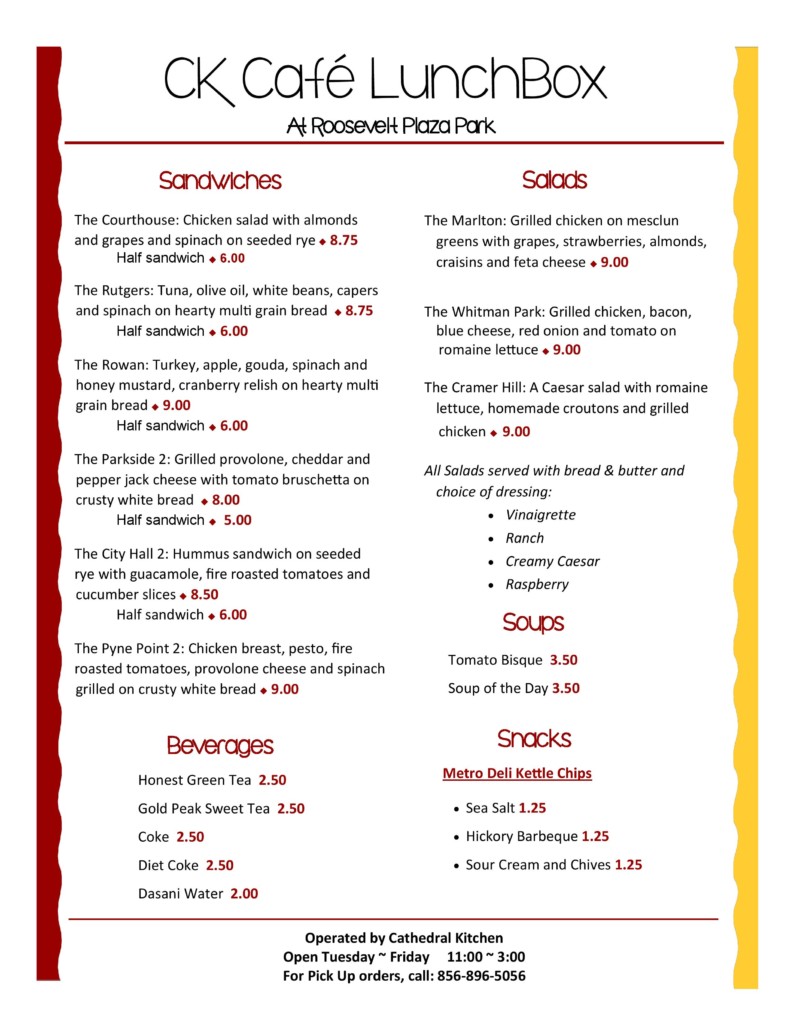 “It’s nice,” Hernandez said. “It’s an opportunity to get out of the office.”

“It adds to the neighborhood,” said Leyba; “makes it prettier, livelier.”

Cooper’s Ferry Partnership CEO Kris Kolluri said that offering “the amenities that exist in other cities… is what is expected” from Camden.

Despite downgrading from plans for a waterfront eatery, Kolluri said the pop-up spaces can become “a focal point for downtown amenities.

“We should be maintaining the diversity of food choices that exist here, and amplify those food choices,” he said, gesturing to the small businesses that ring the plaza’s commercial district.

“Every city that I know that is successful and sustainable should have a range of choices,” Kolluri said.

Cooper’s Ferry project manager Alli Hawco offered another perspective: that installing a pop-up café space instead of a fine dining establishment mitigates the risk it could have taken to get a more complicated enterprise off the ground. 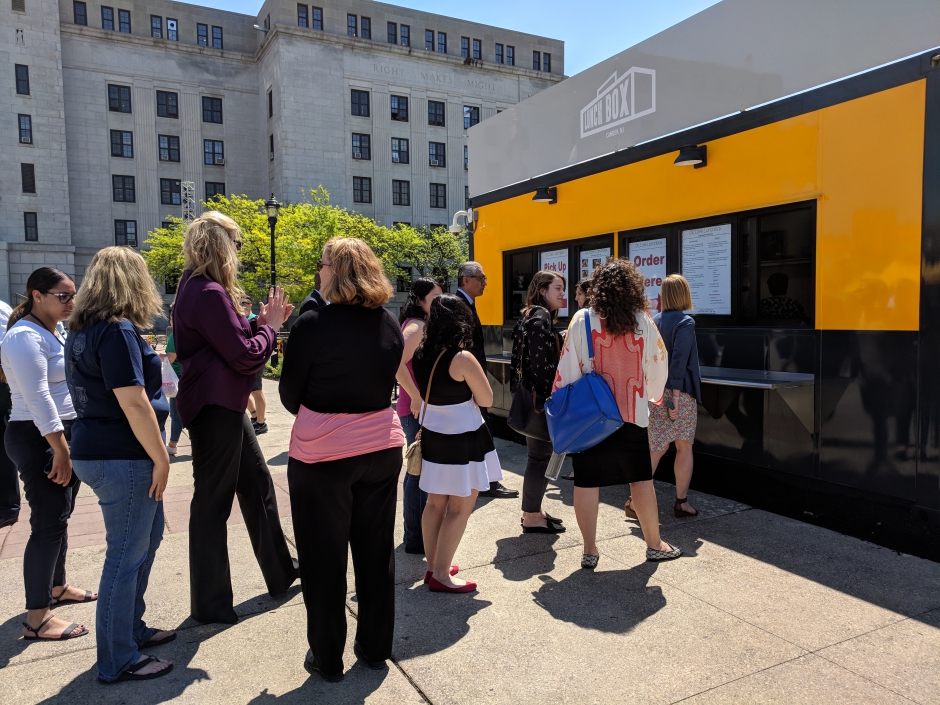 “We’re taking two Camden-based restaurants from opposite ends of the city, and giving them a new opportunity without them having to construct a brick-and-mortar location,” Hawco said.

For Mitchell, the cafe will be a success if Lunch Box familiarizes customers with offerings from the Respond, Inc. bakeshop at 901 Pearl Street (which also appear weekly at the Haddonfield Farmers Market).

He’s also already got a follow-up to the Camden Cookie planned.