Collingswood Police Chief Kevin Carey said the actions of four officers who saved a man trapped in a sinking car make them eligible for the department’s heroism award. 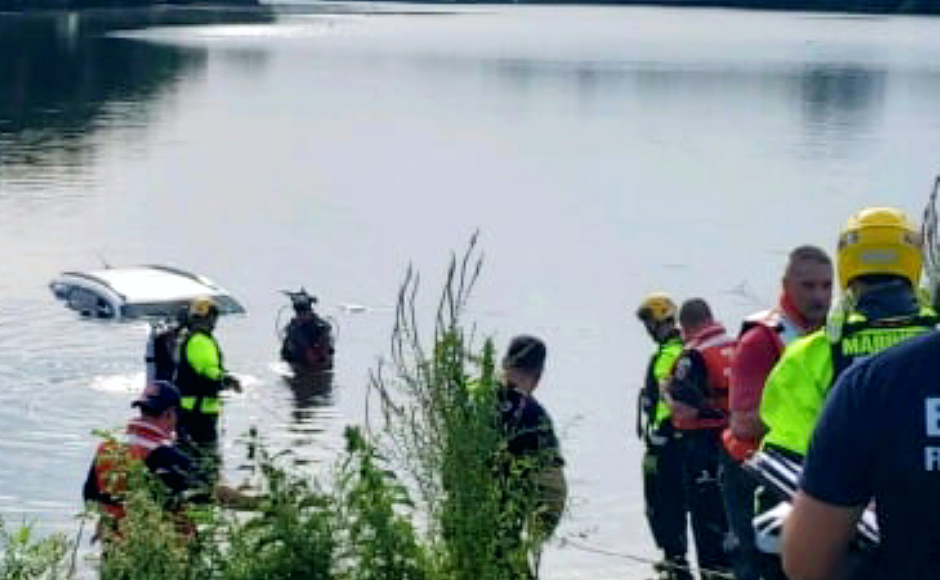 Four Collingswood police officers who rescued a man trapped in a submerged vehicle in Cooper River on Saturday morning are candidates for the department’s heroism award, their chief said.

“As their chief, it is absolutely humbling to see that unfold,” Carey said. “This seems to fit our heroism award, which I’m sure they’ll be nominated for.”

Jacoby has already received that award for his efforts to save a capsized kayaker in 2019, as reported by the Courier-Post. To Carey, Saturday’s rescue was further evidence of “the type of character they have” and “their selfless service to the community.”

“I know they have that in them,” the chief said. “To me, it’s just great that other people can see who they are and what they’re about.”

Levi Combs, III, who had a front-row seat to the events of the rescue, and who broadcasted it in real-time on Facebook from his phone, shares Carey’s opinion.

Combs, III, a pastor at the First Refuge Progressive Baptist Church of Camden City, said he first took notice when the van he was driving behind on Route 130 began swerving and picking up speed.

As the vehicle approached the Route 130 bridge at Cooper River Park, Combs, III said he could see the driver’s left hand waving out of the window. On the phone to his wife, he said, “That boy’s going to crash that car.”

The next thing he saw “was like a Hollywood stunt,” Combs, III said. 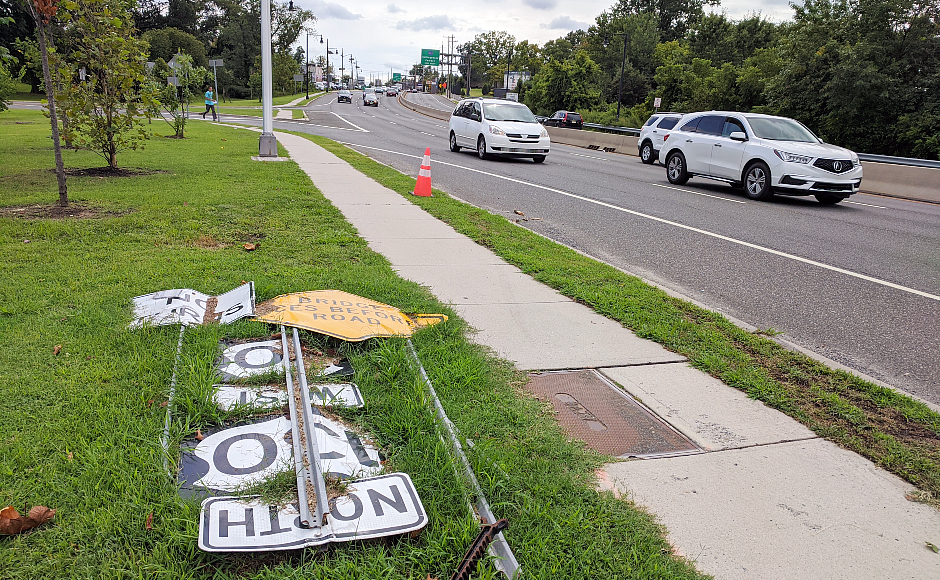 The driver failed to negotiate the curving roadway and hopped over the curb, heading down an embankment towards the river, narrowly missing a pedestrian and taking out road signs and trees as he went.

“The bumper went straight down, and that’s when it began to flip,” Combs, III said.

“If I didn’t see it, I wouldn’t have believed it.”

After flipping, the van then rolled into the river. Combs, III now found himself shouting on the phone.

After calling 9-1-1, Combs, III then spent what he described as a frustrating amount of time trying to communicate his location to Burlington County dispatchers before finally being transferred to Camden County emergency services.

As the vehicle started to sink into the river, and with no rescuers in sight, the pastor began to confront his own resolve.

“In my head, I’m thinking something that Jesus said about the Good Samaritan, whom no one would go to help him,” Combs, III said. “I should have been concerned about what would happen to the man if I did not help him.

“I’m on the phone; my mind is racing,” he said. “Should I go in the water? And then Collingswood zoomed in.”

Once the officers arrived, Combs, III said he “was in awe of the fast response,” as they took off their utility belts, and dove into the Cooper River.

According to Carey’s account, Jacoby was the first to reach the vehicle, and perched on the last visible piece of it: a segment of the roof that had not yet sunk. Jacoby began to smash in its window with his collapsible baton; after the glass yielded, he cut up his hands reaching inside.

Shortly thereafter, DiCugno reached the vehicle as well, but he and Jacoby couldn’t find the driver within, stymied by muddy river water and deployed airbags. Then Roseboro managed to pull the victim out of the driver’s side window, and, with help from DiCugno and Jacoby, pulled his head above water. 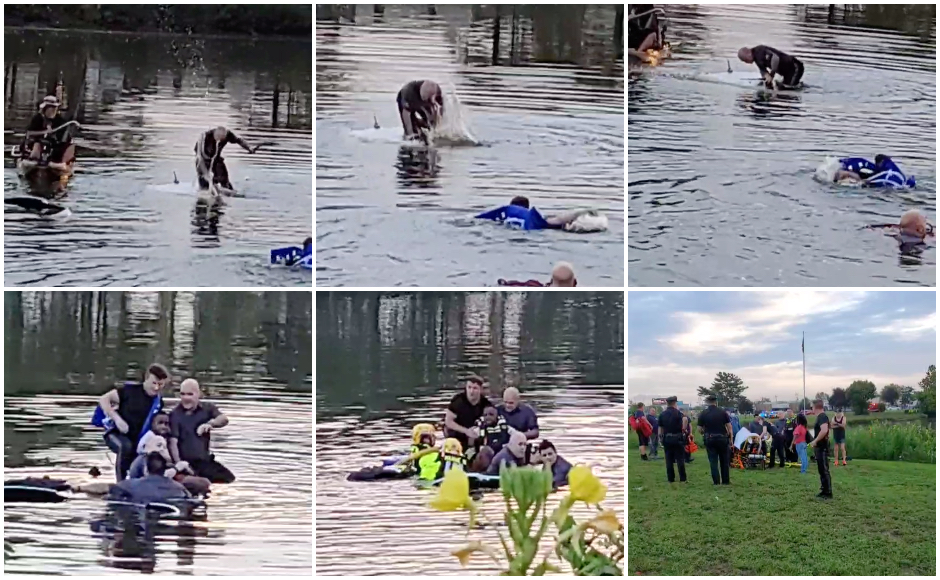 Finally, Bruns swam out with a life vest and tow rope, and all five men waited, perched on the van, for water rescue specialists from the Collingswood Fire Department. Although the water unit came quickly after being dispatched, if the officers on the scene hadn’t acted when they did, the help might have been too late.

“In this incident, waiting [for a marine rescue unit] wasn’t going to be an option,” Carey said. “If they had waited for the fire department, there’s no doubt in my mind he would have drowned.”

Combs, III sees it the same way, too. For the pastor, who’s done outreach to bridge the political divide between law enforcement and communities of color, the moment was a signifier that “there are good, wholesome police officers that really care.

“I intend to do something as a community, as a church, in appreciation for their heroism,” Combs, III said. “You cannot just put everyone in the same barrel.” 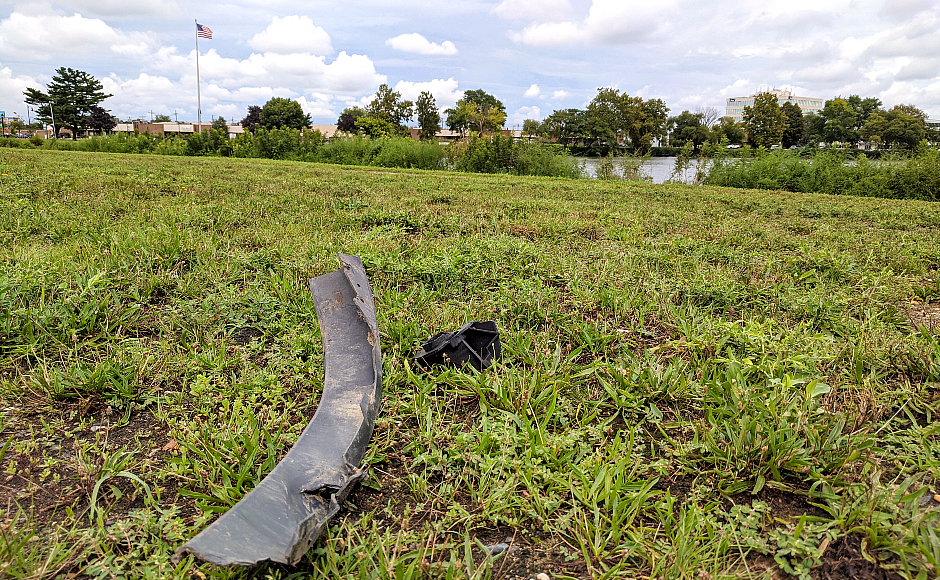 “That is our concern and our goal,” he said.

Combs, III said that the man who was rescued from the river connected with him over social media to thank him for calling in the crash.

“I extended him an invitation to meet, once he has come to some sort of calm from the trauma,” Combs, III said; “to come and sit and talk with me.”

The Camden County Police Metro Division retrieved the vehicle from the river and towed it after the accident.

The driver was issued four motor vehicle citations for reckless driving, improper passing, unsafe tires, and improper seatbelt usage, but his identity was not released.