Chef-owners James Liuzza and Joey Muldoon will reopen the doors at 9 King’s Highway West in November 2021, just two years after launching their Collingswood market in 2019. 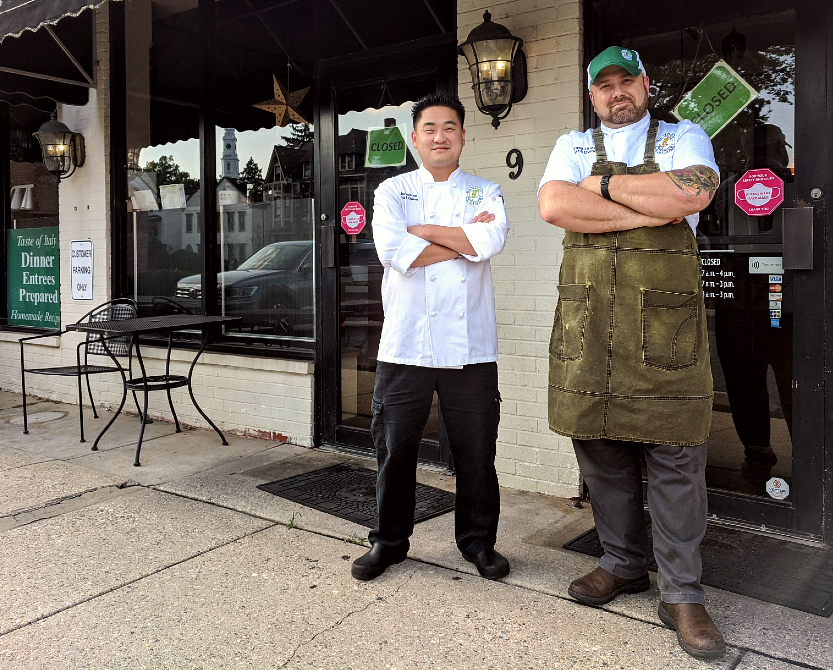 Less that two years after opening the doors at Haddon Culinary, their chef-driven, boutique grocery store and fresh foods market, James Liuzza and Joey Muldoon are planning a Haddonfield expansion.

The duo will renovate the former Ludovico’s Deli, a decade-long Haddonfield staple, at 9 King’s Highway West, into a second Haddon Culinary location this November.

They hadn’t been looking to expand the business, but when Ludovico’s owners Larry and Roxanne Maggio, who quit their lease on the property in April, reached out to the chef-grocers, Muldoon and Liuzza saw the potential of the space.

“They wanted to make sure all their hard work and their legacy was left in the right hands,” Muldoon said. “Obviously, we were honored; instantly, it felt like a great opportunity.

“We just couldn’t pass it up because we’ve had so much success with the Collingswood location, and such a great response,” he said.

“If there were other opportunities to expand during our first two years of opening, we would have most likely passed for the same reasons that are every other business owners’ nightmares right now,” Liuzza said. “This opportunity makes so much sense in so many ways [that] we couldn’t pass it up.”

What made them say yes, Muldoon said, was the turnkey property, just a few months out of use as a full-service deli, and their confidence in their existing staff to replicate the success they’ve enjoyed in Collingswood.

“We wouldn’t be doing this if we didn’t feel we had the right team of professionals,” he said.

“[Ludovico’s]  was well-kept,” Liuzza said. “It’s mainly the food that’s going to make it ours.”

That’s not to say it hasn’t taken time for the duo to build to this moment. Liuzza honed his chops as a young chef in Atlantic City before being named the executive sous chef at Scotland Run golf course, where he met Muldoon.

The two found a kinship in the kitchen, and Muldoon followed in Liuzza’s footsteps, graduating Johnson and Wales thereafter, eventually working his way up to opening his own Northfield restaurant, Roberta’s by Muldoon.

Later, they reconnected at Di Bruno Brothers in Philadelphia, where Liuzza spent a dozen years as executive chef, and Muldoon worked for a few years as executive catering chef, before teaming up with Rastelli’s Market for plans to create a farmstead restaurant in Mullica Hill. 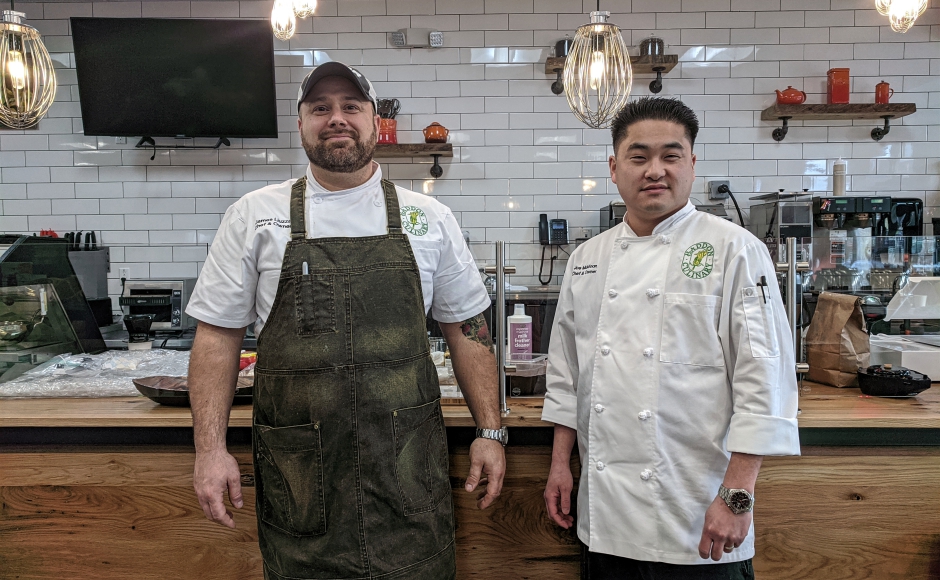 Although that venture fizzled, the pair rekindled their partnership in Collingswood, overhauling the former McFarlan’s Market at Haddon and Washington Avenues into a model they describe as a “chef-driven market,” with curated specialty goods, a butcher and seafood case, and freshly prepared meals.

When the pandemic hit their business just a few months after its doors opened, Liuzza and Muldoon leaned hard into their grocery service, filling phone orders and packing bags for customers who preferred contactless pickup to supermarket runs.

That level of service won shoppers who recognized their attention to detail and the quality of  their product, which has carried over in the months that followed.

“With many of the large grocery stores being out of stock, this was the point when we really developed a great relationship with our customers,” Liuzza said. “We would do it all over again for them.”

Operating a second Haddon Culinary a little more than a mile up the road from their Collingswood storefront will allow the Haddonfield shop to build on the work the chefs have done there. Both locations are convenient to the PATCO Hi-Speedline, and Liuzza and Muldoon hope that commuters will leverage that access.

“When we’re doing our menu planning, we are definitely considering quick service so you’re able to get in and out, with the PATCO in mind,” Muldoon said. “I think it definitely lends us an advantage.”

“We hope [the new storefront] is going to draw more interest to our Collingswood location for our homemade sausage, our prime steaks, fresh seafood, and things like that,” Liuzza said.

“We’re looking at prepared product and a la carte options [in Haddonfield]; our coffee presence will probably be bigger there because we have more room,” he said.

In addition to supporting their Collingswood business, Liuzza and Muldoon believe the Haddonfield site will allow Haddon Culinary to support the community of small businesses that populates King’s Highway in Haddonfield.

Their Collingswood neighbor, DiBartolo Bakery, has a foothold in each downtown, and Mecha Chocolate of Haddonfield, which is owned by Collingswood residents Melissa and Chuck Crandley, is right down the street as well. 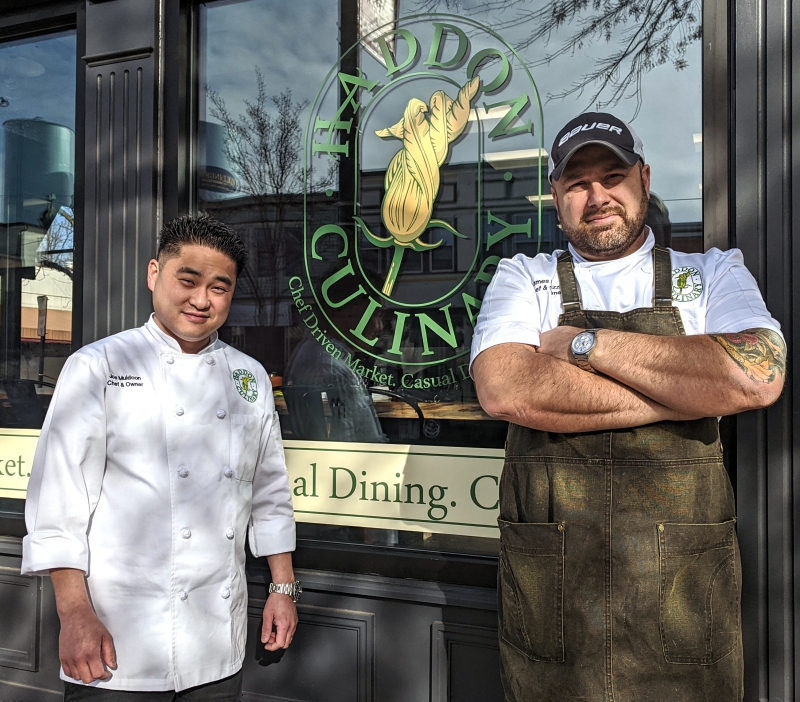 Creative partnerships with their neighbors along Haddon Avenue in Collingswood have already shown Muldoon’s and Liuzza’s ability to connect the dots for customers of different businesses.

For example, “juice til’ dinner program” with Wild + Co. of Collingswood catered to health-conscious shoppers by inviting them to close out a custom juice cleanse with a selection of special menu items at Haddon Culinary.

“People drinking juice all the time don’t trust things that they don’t cook themselves,” Liuzza said.

“We broke that barrier, and created this program where we have a lot of [dishes that fit their dietary restrictions], and everything’s marked with a tag.”

“We’re not just here to run our own business, we’re here to make the business community grow, and create more traffic for other businesses, and make it even more of a destination,” Muldoon said. “Any time we can collaborate with other businesses, it makes us feel good, and it’s the right thing to do.”

As they approach the second anniversary of their Collingswood location, the chefs are preparing to host their first prix fixe dinner September 23, a multi-course meal built upon ingredients from neighboring Revolution Coffee Roasters, and featuring wine pairings from Auburn Road Winery. It’s the type of service that harkens back to their fine dining days, giving Muldoon and Liuzza a chance to showcase the talents behind their everyday dinners.

“We’re turning out great food, and focusing on what we say in our mission statement,” Liuzza said. “We put extra thought and our vast experience behind everything that is offered, from our product- and ingredient-sourcing to our technique in the kitchen.

“We’ve been received very well in Collingswood, and we’re going to work very hard to have the same response in Haddonfield,” he said. “We know it needs to be earned.”

Until the Haddonfield shop opens this fall, Muldoon invited borough residents to visit Haddon Culinary at 741 Haddon Avenue in Collingswood to see what the store has to offer guests.

“The heart that we put into our food and product, the personal-touch customer service; I want as many people as possible to take the drive downtown,” he said.

“I think if they were to visit Collingswood now, they’d really be excited about what’s to come.”