Dominic and Lindsay Piperno believe Restaurant Row can support a fine dining option, and are banking on a new, open-concept kitchen, centered around a wood-fired grill, in the heart of the business district. 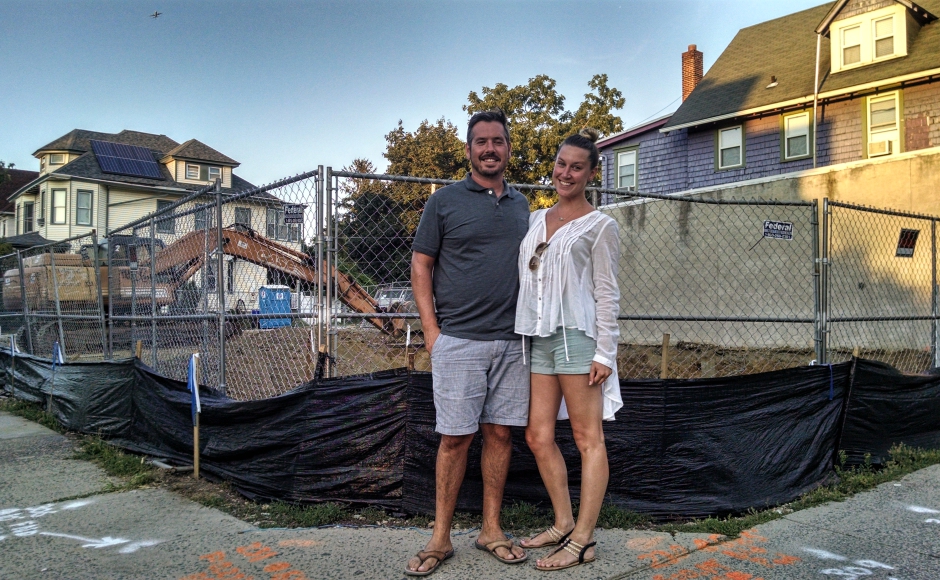 Chef Dominic Piperno remembers taking the PATCO Hi-Speedline home from Philadelphia at 2:30 a.m., looking around the train car, and realizing he was surrounded by as many kitchen staff as he’d left back at the restaurant when his shift ended.

Like him, they were commuting to the city “because there was nowhere [comparable] for them to work” in South Jersey.

The absence of fine dining options isn’t due to a lack of talent, he contends; merely a lack of opportunity.

“There’s plenty of cooks around here,” Piperno said. “That’s not the problem. It’s whether you train them and teach them your culture of food.”

Piperno and his wife, Lindsay, are hoping to change that circumstance with a new, fine-dining concept the pair are bringing to Collingswood. On Monday, they broke ground on the project, which is situated in a vacant lot at the corner of Frazer and Haddon Avenues, across from the borough library.

The Pipernos believe the same virtues that make Collingswood a commuter town for Philadelphia professionals can serve it by keeping those residents in the borough for fine dining, too. The same people who catch a happy hour drink or after-work meal in the city could be enticed to stay in their hometown if there were somewhere comparable for them to patronize, they reasoned.

“I think the restaurants in Collingswood are fantastic, but most are similar in style and genre of food,” Dominic Piperno said. “We want to be a new style of restaurant. We just want to open people’s eyes to the fact that there is other cuisine out there.”

The Pipernos are tight-lipped about specifics for the eatery, but describes their intentions as “contemporary American” and “rustic yet romantic.” The kitchen will be centered around a wood-fired oven and grill, and the restaurant itself will be tied to the sensory impressions fueled by that fire. Rendering of the Piperno’s plans for their restaurant. Credit: Ambit Architecture.

“The whole restaurant is open,” Dominic Piperno said. “Walking by, you could easily see into the kitchen. All the doors are pocket doors; on a beautiful night, it’ll look like a completely open-air restaurant, where you’ll hear and smell the fire, and the wood, and the music. We’re hoping that our restaurant gives people that comfort of the fire.”

Dominic Piperno fell in love with open-fire roasting for the charring flavor it adds to dishes, particularly animal proteins. Although this high-heat style of cooking is popularly used in making pizzas and flatbreads, Piperno says its place in his kitchen will be confined to meat and vegetables.

“I love the simplicity,” he said; “just taking a high-quality meat, seasoning it correctly, and not overthinking ingredients too much. The flavor profile it gives vegetables is incredible; it brings out these natural sugars.”

Dominic Piperno trained at the French Culinary Institute in New York, and spent two years afterwards living and working in Parma and Chianti in Italy. Upon his return home, he joined up with Chef Joey Baldino in the early days of Zeppoli, where he learned “the simplicity of cooking” as both a line cook and sous chef.

He was prepared to start his own restaurant after, but at Baldino’s advice, decided to spend another year in the field first. Going from one James Beard-nominated kitchen to another, he landed at Vernick Food and Drink in Philadelphia. Baldino describes Dominic Piperno as “one of the most hard-working, talented guys that I know.

“I’m so proud of him,” Baldino said. “[Piperno]  helped me build my restaurant, and now he’s doing his own thing. It couldn’t have happened to a better guy.”

Wood-fired cooking is an integral part of Mediterranean cooking, and Baldino said he is happy to see his colleague embrace it.

He regards Piperno as one of “many great, talented guys” he’s been able to hire at Zeppoli because they subscribe to his cooking approach, and suspects the Pipernos will have little trouble attracting similar talent if their vision is as clear.

“The product that we’re putting out dictates the quality of the chefs we get,” Baldino said. “Because we’re trying to find the best ingredients we can and get the best product out to our guests, it brings chefs to us.”

Although Baldino believes “there’s room for everybody” in Collingswood, he thinks the Pipernos’ concept has the potential to attract a following. Such broader cultural shifts are typically gradual, but Baldino thinks more chefs could choose South Jersey over Philadelphia if the market bears it.

“It’s the same thing in my neighborhood at Passyunk Square,” Baldino said. “When I was 13, I was playing ball in the middle of the street, and now you can’t even find a parking spot because it’s the hottest street for restaurants in the country.

“Dominic is really going out there and doing something different that nobody else has done before,” Baldino said. “He’s building the place from the ground up. He’s really breaking boundaries. He’s going to do great things.”

In addition to bringing a different concept for cuisine and atmosphere, the Pipernos believe that their approach to hiring will help distinguish the quality of dining experience they’re able to offer. They plan to train and test their staff not only on customer service, but on dietary restrictions, flavor pairings, and seasonal ingredients.

“I want them to be able to answer any question that a guest has,” Dominic Piperno said. “When people fall in love with service, they feel that their server knows what’s going on, loves what he or she is doing, is willing to talk about the food, and can sell you on the food.”

“If you set the example of your culture and people buy into it, you can train anybody to at least be dedicated at the position, from a busser all the way to a manager,” Lindsay Piperno said. 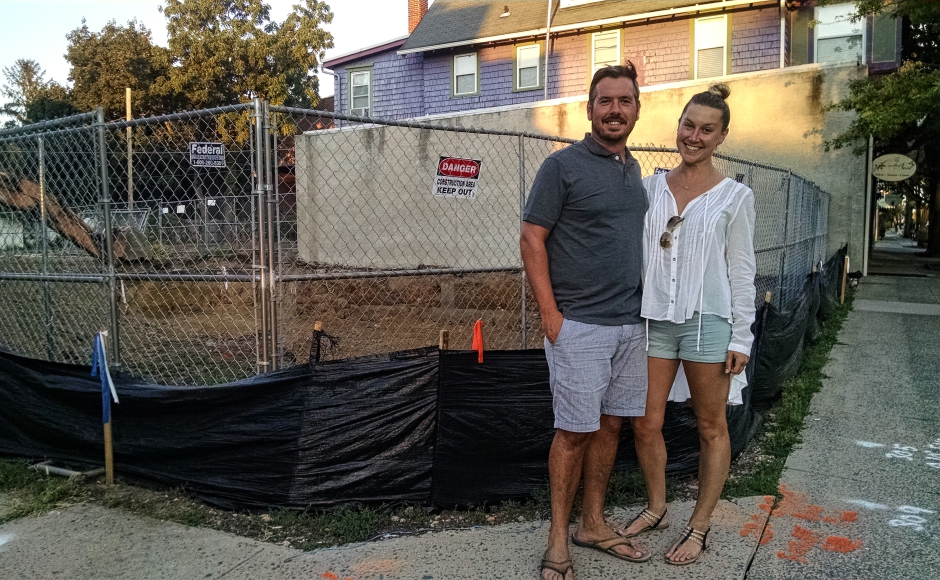 Lindsay Piperno, who will head up the front of the house, has worked in the restaurant business since she was 16, and spent the past year at The Chop House in Gibbsboro.

When she describes the vision for her restaurant, Lindsay Piperno talks about creating a metropolitan dining experience, with contemporary lighting, décor, and music—an atmospheric experience that engages all the senses.

Philadelphia restaurants that she describes as fitting that mold include Zahav, Townsend, and Helm; places that hold the interest of guests of varying ages.

“Our kitchen will be open until 10, and the atmosphere at 9:30 will be so much different than the atmosphere at 5:00,” Dominic Piperno said. “We want to be that neighborhood bistro where you can come and get a little bowl of pasta or a full meal, or come and have dessert and sit outside.”

The restaurant should seat 60; 45 indoors, with another 15 al fresco. The building itself, which was designed by Rich Villa of Ambit Architecture, will feature open-air parking in the rear and a pair of three-bedroom condo/apartments above. The Pipernos, who have been Collingswood residents for five years, plan to move into one of those units.

“I love the idea of having condos above with a storefront,” Dominic Piperno said. “We didn’t just want to build a restaurant on an empty lot. We wanted to be part of the town.

“We’re South Jersey people,” he said. “We always have been. We want to raise our family in Collingswood. Opening in Collingswood made the most sense for us.”

Stay tuned for more announcements in the coming months, as the Pipernos roll out their plans.