Sgt. Kevin Carey will assume the role of Acting Chief September 1, and says he wants to focus on quality-of-life issues in the borough. 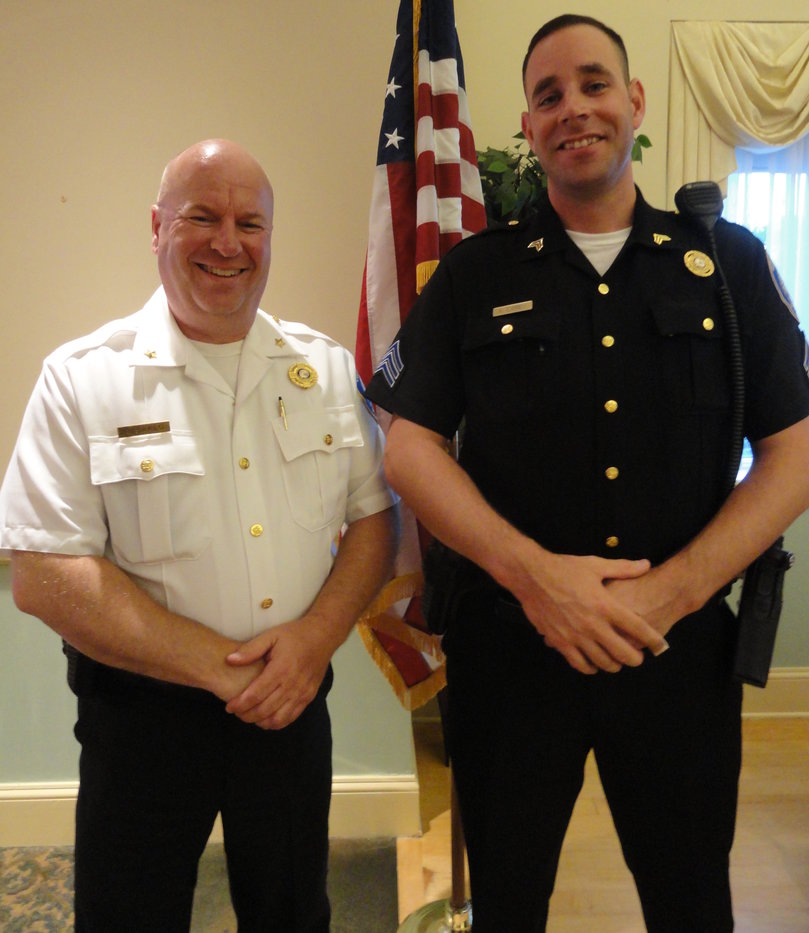 Collingswood Police Chief Richard Sarlo (left) announced his retirement at Monday’s borough commissioners meeting. He will be succeeded by Sgt. Kevin Carey, who will be sworn in as Acting Chief in September. Credit: Matt Skoufalos.

After more than a quarter-century in service to the borough, Collingswood Police Chief Richard Sarlo is retiring.

The veteran law enforcement officer, who has held every rank in the department in his career, called it “a boyhood dream” to have done the job, and called his departure “bittersweet.”

“This is what I know,” Sarlo said Monday at the meeting of the Collingswood borough commissioners. “This is what I’ve been doing.”

Sarlo will be succeeded by 32-year-old Sgt. Kevin Carey, who will be sworn in as Acting Police Chief at the September commissioners meeting.

The month in between will be given over to the two to coordinate the transition of power, said Collingswood Mayor James Maley.

“We haven’t done this before, so we’re giving the incoming chief a month to work with the outgoing chief,” Maley said.

“We’ll be working through that period to look at the police department anew.”

Maley said he expects Carey will help the borough maintain its police services “in a more economical way, and adapting to the times.” He credited fellow Commissioner Michael Hall and the New Jersey State Police Chiefs Association with assisting in the candidate search.

“I’m really happy with the process,” Maley said. “It was thorough, it gave us a good overview; we learned a lot.”

When asked what made Carey a good fit for the position, Maley said his incoming acting chief has a mix of “the intelligence, the skill, the talent, and the fortitude” necessary for the office.

“We think that his youth is a very good thing for our police department,” Maley said, “much in the same way it’s been really good for our fire department.”

“This is a nice start for Kevin, who I’ve known since he was in third grade,” she said. “[His] dedication, enthusiasm, and skill will bring a great new future for the department.”

Sarlo added that Carey “is going to be a great chief.”

The lineage of the Carey family in the borough police department was also a subject of discussion at the meeting. Kevin Carey’s father, William, was a Collingswood police officer for 27 years and retired as the deputy chief of the department.

But for Kevin Carey, who was five at the time his father stepped down, the impulse to wear a badge was all his own.

“This is just something I’ve always wanted to do,” he said.

The soon-to-be Acting Chief said his vision for the office is “to take the department in the direction that [is] more kind to the residents in town.”

Along with Carey’s swearing-in and Sarlo’s retirement, Collingswood Special Officers Alexander Romano and Eric Day will take their oaths as Class II Officers at the September meeting of borough commissioners.