Trending
You are at:Home»Schools»The Case for Opting Out of PARCC Testing

Mike Kaminski, head of the Delran teachers union, broke down the implications, big and small, of not taking the test for a group of local parents. 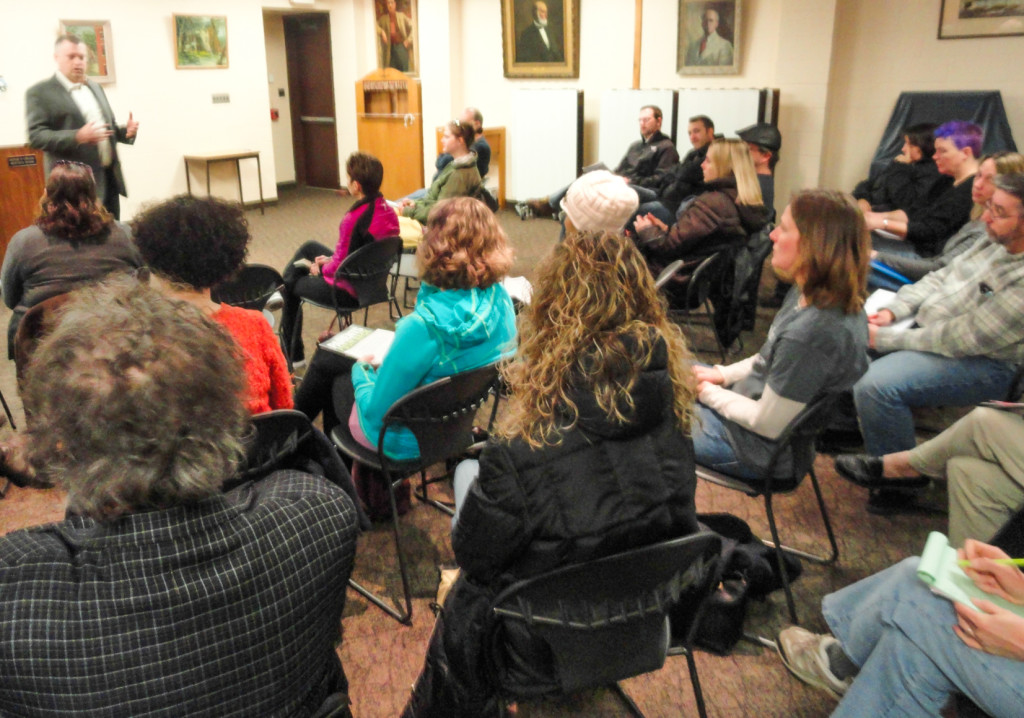 Delran High School history teacher Michael Kaminski is speaking to a crowd of parents gathered in the Collingswood Public Library on a Saturday afternoon.

It’s mere weeks before many of their kids will have their first experiences with the new standardized exam, a test created by the 12-state Partnership for Assessment of Readiness for College and Careers (PARCC) consortium.

And he’s telling them the game is rigged.

“I hope that the next step is that we’ll be the next state to opt out of PARCC as a state,” Kaminski said.

“Ultimately that’s where it has to be,” he said; “to become the next state to opt out of PARCC.”

Kaminski isn’t just a history teacher; he’s also the head of his school’s teachers union and one of a number of educators organizing community opposition to participation in the PARCC exam. He believes the mechanisms of the test are flawed, the expense required to install it is unjustifiable, and the exam itself is designed to engineer failure.

Not a graduation prerequisite

It’s a myth that passing the PARCC is a graduation requirement for the class of 2015, Kaminski said. The Department of Education offers it as one of several standardized testing options for students to fulfill as a condition of graduation for the classes of 2016, 2017, and 2018. But that list includes other exams like the ACT, SAT, and PSAT, too.

For students in the graduating classes of 2019 and beyond, however, Kaminski said their diplomas would likely be tied to the test. And although the exam is only offered for students in grades three through 12, he said parents should expect additional assessments for children in the lower grades, too.

Trumping up the importance of assessing college readiness via standardized testing is something of a false dilemma, Kaminski said, since colleges themselves “are moving in exactly the opposite direction.” According to the National Center for Fair and Open Testing, some 815 schools throughout the country have made the SAT or ACT optional for admissions.

The Center notes that colleges and universities are making this shift because “the focus on test scores deters otherwise qualified minority, low-income, first-generation, female and other students from applying,” “de-emphasizing tests attracts more students who are academically capable,” and “high school performance—expressed either as grades or class rank—is the best available screening device for applicants.”

Kaminski also noted that in private and charter schools, “there’s absolutely zero requirement” that PARCC scores are tied to commencement. 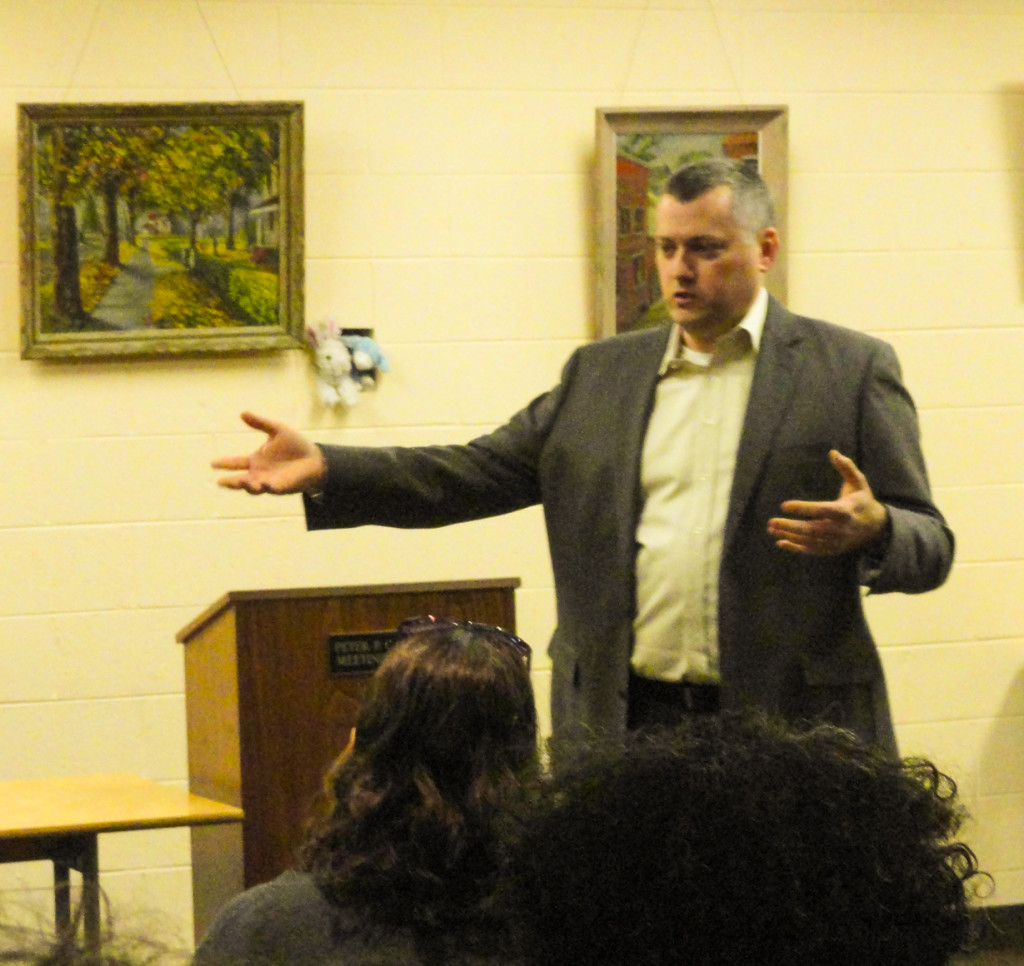 No loss of state aid for opting out

Neither does refusing the PARCC affect districts’ financial pictures, Kaminski said. The only public schools that could be sanctioned financially for not meeting a 95-percent PARCC participation rate are Title I schools, or low-income districts, which must make adequate yearly progress in order to continue receiving federal aid.

In the immediate area, the only such schools are in Camden City, Gloucester City, Lindenwold, and Woodlynne.

“Feds could take 30 percent of Title I grants and require schools to spend on remedial English and math,” Kaminski said.

That claim is echoed by the grassroots opposition group, Save Our Schools NJ, which notes that “only schools designated ‘priority’ or ‘focus’ schools face direct intervention for missing state targets…[and]can have up to 30% of their federal Title I funds re-directed by the NJDOE for specific ‘interventions,’ but even these funds are supposed to be used for school improvement, not taken away.”

“They’re not taking any money away,” Kaminski said. “They’re saying, here, set up a program for extra help in reading and math.”

Groups in other states, like NYSE Allies for Public Education, have noted that no school has yet lost funding for failing to meet the 95 percent participation rate.

Levying of sanctions is determined by benchmarks outlined in the No Child Left Behind Act, from which New Jersey is exempt in 2015, thanks to a one-year waiver granted in November, according to NJ Spotlight.

The real financial penalty of the test, Kaminski said, is the capital investment required to support administration of PARCC, which is proctored entirely electronically. Haddon Township spent nearly $700,000 to lease 1,700 iPad4’s this school year, and Collingswood invested more than $153,000 for 550 Google Chromebook laptops, both with the understanding that the devices would be used foremost to administer the test.

“Did the educational use happen as an afterthought or was that the reason for the purchase of hundreds of thousands of dollars of equipment?” Kaminski said. “Not for the development of skills that will translate into the marketplace, but simply to take a test.”

The consequences of such budget shifts can be to divert funds that might otherwise be spent on staff or other relevant classroom materials, Kaminski said.

“Any state mandate that requires us to spend money that we’re not really willing or able to spend yet is not something that we should be forced to adopt,” he said. “We know our tax dollars are limited. Allow us to spend them in ways that are best for our community.

“So many of us chose to live in our towns at least in part because of the education system. We want you to take more control of that back.”

More than half will fail, arbitrarily

Aside from material objections, Kaminski said teachers don’t support sending children to take a test that they believe more than half will fail due to myriad factors, from poor design to technological hiccups. Worse, he said, the decision of what constitutes a failing or passing score will not be available to teachers until after the test is administered.

“Information does not come back in time to tell teachers anything useful about the test, the questions, and how students answered them,” Kaminski said.

“I’m going to guarantee that 60 percent of my students will fail it before they get it,” he said, figures seen in the Smarter Balanced test, another Common Core assessment.

“And then I’m not going to even [be able to]tell them how many of the questions they have to answer correctly [to pass],” Kaminski said.

For an estimated 13 to 15 hours of “total in-chair time” spent administering the test—numbers provided by Kaminski from the PARCC Test Coordinator’s Manual—he doesn’t feel the experience is worth it. The distribution of scores won’t change, he said; only that more will be deemed to be failing.

“Everybody’s going to line up right where we knew they were going to line up,” Kaminski said, “except they’ll be failing. Now we can designate schools as failing schools, move kids to choice schools; ultimately what’s going to happen is segregation and decreased opportunities for kids.”

PARCC scores are also tied to performance reviews for math and language arts teachers; for this year only, the DOE has said those scores will count for 10 percent of the teacher evaluation grade as opposed to 30 percent in future years. But Kaminski said  that if such is the intention of PARCC, “There are 100 different ways to measure teachers and not one of them includes this particular test

“It’s really being used to measure teachers, so why would we subject our kids to that if we don’t have to?” he asked. “The greater issue is what this is doing for us in our instruction and what it’s going to be doing for our kids.” 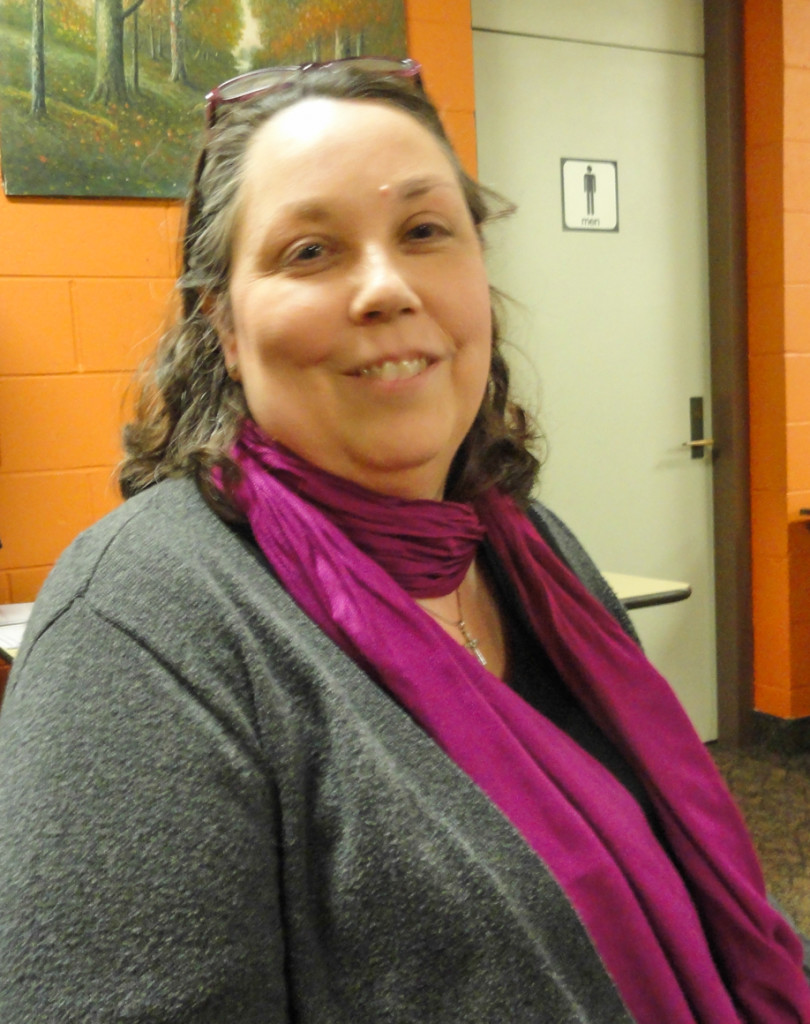 “I can’t tell you how many hours of my time have been taken out for PARCC,” Lewis said.

“I had to do writing comps with my fourth-graders this year. Not that writing is a bad thing, but it’s not art.

“Some days the kids just want to make art,” Lewis said. “Some kids that’s the only reasons they come to school is for the special area. Music, art; it’s a release for them.”

Determining how much classroom time is devoted to PARCC-related instruction in other subjects can be an inherently difficult exercise, however, said Collingswood Board of Education member Fiona Henry.

“It’s tricky because the PARCC is a test of Common Core and schools have to teach from the Common Core,” Henry said.

“I don’t know why any school would label [any lesson as]PARCC…if it’s what your school district would embrace as good teaching.”

Kaminski agreed, adding, “No matter how many ways you shake it, we are teaching to the test.”

Cherry Hill parent Rita McClellan said that even though her daughter, who is in sixth grade, will be opting out of the test, she receives 90 minutes of English Language Arts (ELA) classroom instruction as her school prepares for the PARCC.

“My daughter has trouble with the manipulations of the computer,” McClellan said. “She’s required on almost a weekly basis to do a program called IXL, and by Sunday evening, she’s in tears because she’s having problems getting the answers and turning in her papers through Google docs.

“This is a choice for my guys because the level of the testing is not age appropriate,” she said.

McClellan, who described herself as an organizer and member of Save Our Schools NJ, said that parents “have to be the number one source of organization and push-back” on issues “because otherwise our legislators will just think everything’s okay.

In some local districts, students who opt out of PARCC will be given alternative instructional time; in others, they will only be allowed to “sit and stare” at the screen. Collingswood BOE member David Routzhan said that the despite the absence of a formal resolution from the board, the district has decided that it will not force students opting out of the test to “sit and stare” at screens.

“The inhumane thing to do, for a lack of a better terminology, is to let a kid sit there and stare at a computer,” Routzahn said. “Work on homework, bring a book; something productive.”

Other nearby schools have similar policies emerging or already on the books: