Trending
You are at:Home»Schools»Collingswood»Collingswood Seeks to Rebound from Policing Policies at Outset of New School Year

Borough police, schools, and government regroup after a whirlwind summer in which a discipline policy mandating law enforcement involvement in the school for minor infractions sent residents into an uproar.

School-related talk usually fades to a whisper during the summer, but for a solid month in Collingswood this June and July, it became the number-one topic of discussion in the community and beyond.

The district made national headlines for a policy interpretation that sent police officers to its public schools to investigate all discipline issues, a decision for which everyone involved shouldered collective responsibility, but would only describe afterward as a miscommunication.

After an intense few weeks of warring public letters from the borough school board, government, police, and Camden County Prosecutor’s Office, events finally came to a head in a community-wide forum in July. That forum gave voice to a number of questions from the community, and at the start of the 2016-17 school year, some of those issues are finding their answers in new policy approaches.

From the borough perspective, the key difference between the end of the 2015-16 Collingswood school year and the beginning of the current one is the strongly curtailed involvement of law enforcement in school discipline activities. All parties involved in the July public forum on the issue were assured that would be the case, and a September 1 letter co-signed by Collingswood Mayor Jim Maley and Collingswood Police Chief Kevin Carey signaled the same:

“…police will no longer be called for all, or even most, infractions,” it reads. “Police involvement will be reserved for serious issues. This was the most pressing concern for most parents, and a complete return to the original policy greatly addresses that issue.”

“We’re not going to be called for all the nonsense,” Maley said. “Now you’re only getting called for substantive things where there’s the realistic possibility of a crime. That addresses 95 percent of their issues.”

A group of residents angling for changes to the district’s version of the Memorandum of Agreement, the statewide document codifying police and school interactions, was disappointed to learn that the prosecutor’s office had no interest in amending it. Maley said he was unsurprised by the response.

“I don’t know of any place that has a specific, special MoA,” Maley said. “With that in mind, we looked at what our policies were and what we could address.” 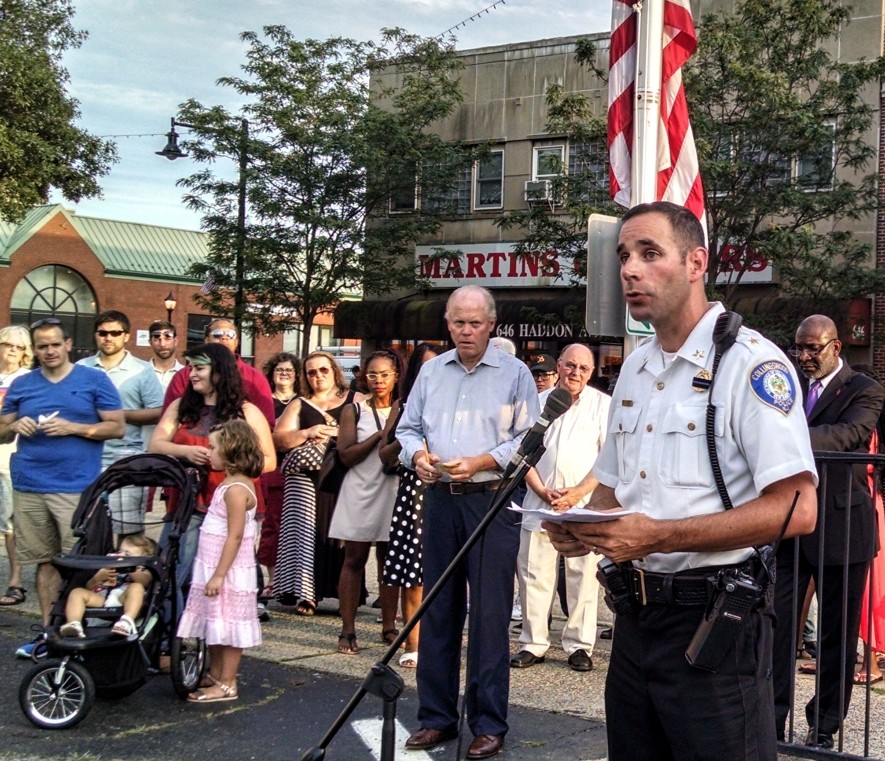 One possible solution to drive greater connections between the police department and school district would be to hire a school resource officer (SRO).

Maley and Carey support the idea, and sent a draft policy for the position to the Collingswood Board of Education (BOE), with which the mayor said the decision now rests.

“The school’s got to let us know they want to do one,” Maley said. “I think that when we had it, it was invaluable.”

With summers off, an SRO could also be deployed to help support officer vacations and police deployments during the times the school is closed to students, Maley said.

Carey said the role of an SRO is not to instill discipline in schools, but to support the school in its public safety needs and to provide a sole point of contact for interactions with local law enforcement.

“Everything would run a lot more smoothly if that were in place,” the chief said. “That SRO in the school really opens the lines of communication and makes sure that the school and police department are both on the same page to serve the children.”

BOE President David Routzahn said the board hasn’t had “any in-depth conversation” about an SRO, but that he personally views the position as a complement to existing security staff.

“We had an SRO for quite some time, and it was more a budgetary thing,” Routzahn said. “As long as it’s not interfering with education, I’d be amenable to it.” 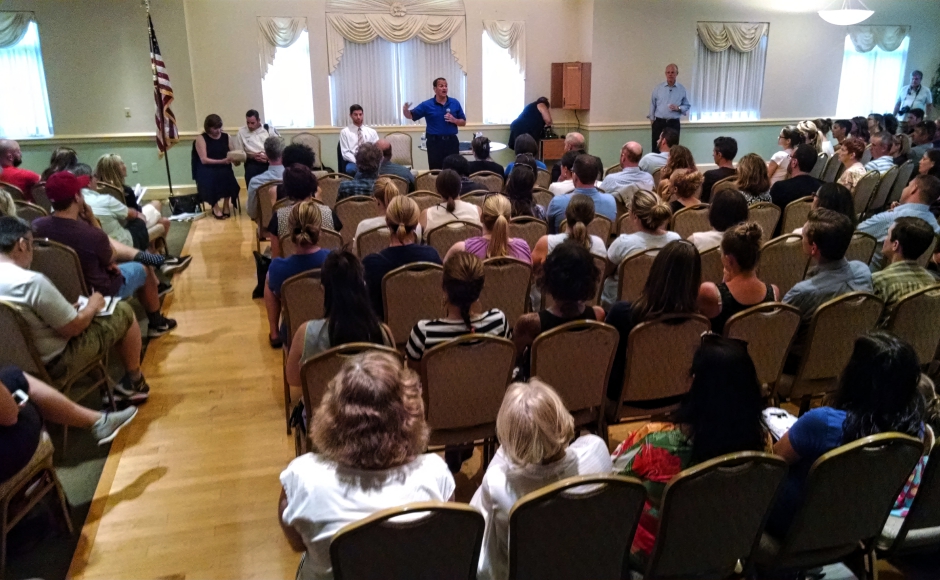 To Carey, the principal differences in the relationships between school and law enforcement at the top of the current school year have been much more clearly defined.

In short, he said, “they have their professional discretion back,” and the result of the controversy is that “there’s going to be more open conversation with the school.

“We’re excited to have a hands-off approach, and to be back involved with the schools in a positive way, rather than in the negative way that we were last year,” the chief said.

That “positive way” includes L.E.A.D. (Law Enforcement Against Drugs), a fifth-grade program that is designed to introduce children to police both in and out of uniform, and hopefully help children understand that law enforcement are “approachable members of our community,” Carey said.

Along with the revised policies governing interactions with children within the district, Collingswood police will undergo three community relations trainings, one from the American Civil Liberties Union (ACLU), a practical constitutional law training called “Policing in a More Perfect Union,” which was was started by retired Philadelphia Police Commissioner Charles Ramsey, and autism sensitivity training through Bancroft.

Maley said the programs are all focused on de-escalating civilian encounters with police, and offer lessons that aren’t confined to the school-aged population.

“It goes across the board,” he said. “A lot of the things you see going on in the world involving cops, if somebody had the training to help de-escalate what’s going on, we might not have seen the things we’re seeing.”

“I really think those trainings are going to be a complement to the officers,” Carey said. “It’s good to have something to reinforce that.”

Carey said the public outcry around the incident in the district has “pretty much sparked a full audit of our policies and procedures,” and that re-evaluation “is going to make the department a much better department.” 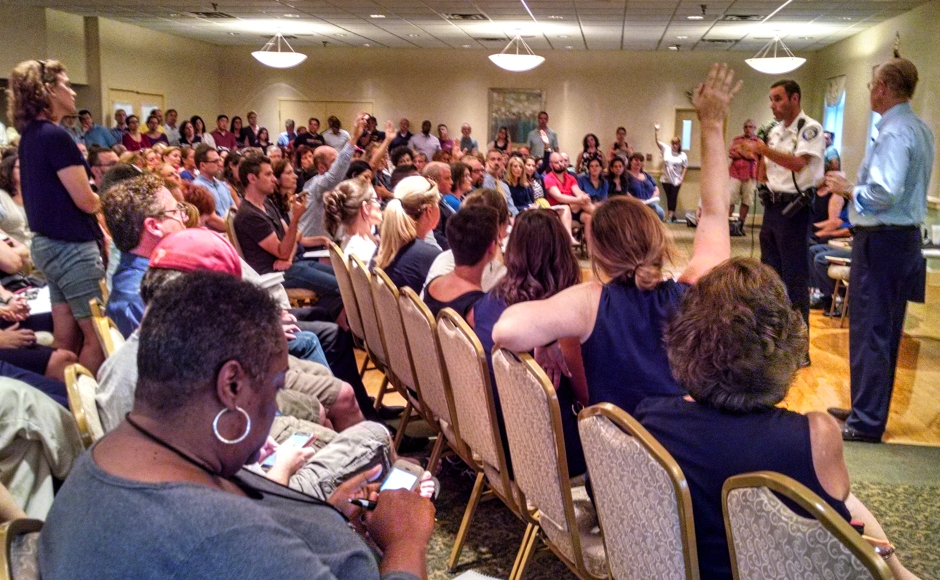 Routzahn said he considers “the communication aspect of things” the biggest takeaway for board members after the July public forum, but that “as far as the district is concerned, we’re back to May 24.”

The BOE president said the body will be focusing on advancing its goals for 2016: building on its literacy program, addressing shortfalls in the participation of minority students in advanced placement and honors courses, and preparing for a possible bond referendum to renovate its stadium and athletic facility.

“I want people to feel they are getting good, if not great, representation on the board,” Routzahn said. “I am very thankful for what we have here in Collingswood. I think, overwhelmingly, the public believes that too, and that’s important.”

Routzahn said he also understands that, as a result of the fiasco during the summer, some percentage of the community will remain unsatisfied with the body regardless of its response to those issues. He wants borough parents “to give us a chance to earn your trust back.

“You have to allow us to do that and to prove that things will be better going forward,” Routzahn said.

A handful of Collingswood residents have taken the incident as a jumping-off point for a run at the board in the November election.

Jay Waugh, who supervises special education for the Camden public school district, is one of them.

Waugh said he left the July forum with “mixed feelings,” and was critical of the district response to the community concerns.

“Nobody really owned the mistakes, especially the board and the superintendent,” he said. “It felt like they were defensive at times.”

A number of Collingswood residents who have organized themselves as the Collingswood Educational Advocacy Group had pushed for a local addendum to the MoA or a reformation of district policy that would more clearly outline student interactions with police. Although the district won’t be amending its MoA, Waugh said he was satisfied by the interpretation of its tenets as presented by Superintendent Scott Oswald at an early September school board meeting.

However, at that same meeting, he said, “people were still looking for an apology and we didn’t really hear one.

“There are still people who are upset and who want to see people [in the district]held accountable,” Waugh said. “Personally, I don’t feel that way at this time. I’m satisfied with [the MoA policy]as a parent in the district and a professional educator, and [am]moving on right now to concerns with our board and our superintendent.”

Waugh said that he and others in the advocacy group are “not going after anybody or looking for someone’s head,” but want the district to address a handful of key issues: special education implementation and resources, reducing the amount of homework assigned to students, standardizing the district policy for recess, and addressing demographic-based achievement gaps.