To preserve a district that will be hemorrhaging money amid climbing educational costs, Oaklyn could send its 6th-through-12th-graders to Collingswood and rent out half its school building. 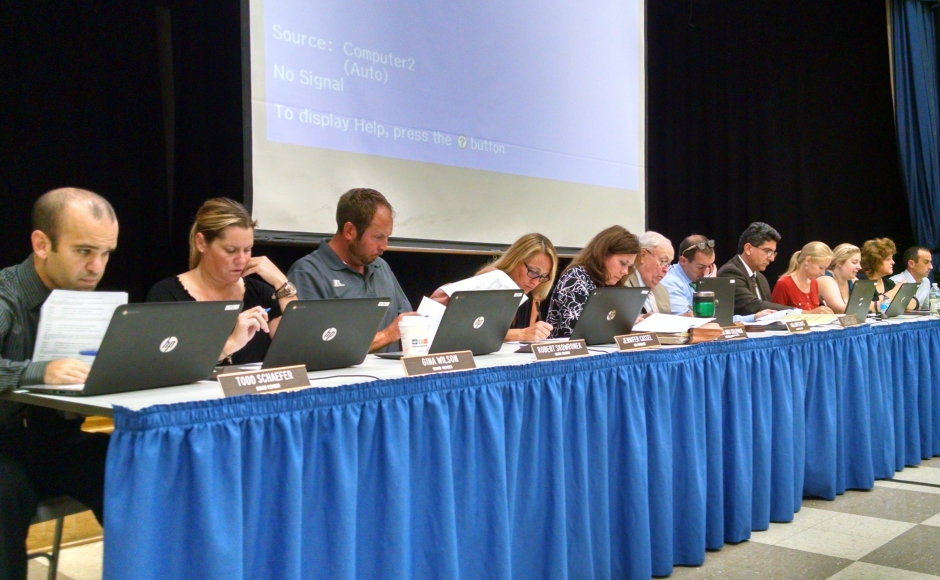 The Oaklyn Board of Education. Credit: Matt Skoufalos.

Unless it expands its send-receive relationship with neighboring Collingswood to include sixth- through ninth-grade students as well as high-schoolers, and rents out half its building after doing so, the Oaklyn school district could be bankrupt beyond salvaging, a group of consultants told the borough board of education (BOE) on Tuesday.

The BOE, which has been battling to keep its doors open amid escalating operational costs since ending its own send-receive relationship with Hi-Nella, heard the results of the $35,000, year-long study at its September meeting.

Gagliardi said his firm was challenged to come up with an alternative structure to resolve the district’s problems while retaining its local control. Its recommendation is to expand Oaklyn’s existing send-receive relationship with Collingswood, negotiate a lower student tuition rate for those services, and rent out the space saved in its district building by eliminating the higher grades.

Within three years, the firm projected that the Oaklyn Public School would have to find room for 421 students in a building with a capacity of 581 students. Expanding the send-receive relationship with Collingswood could open up nearly 400 of those seats for the district to rent to third parties, like charter schools, daycares, or activities-based groups, Gagliardi suggested. 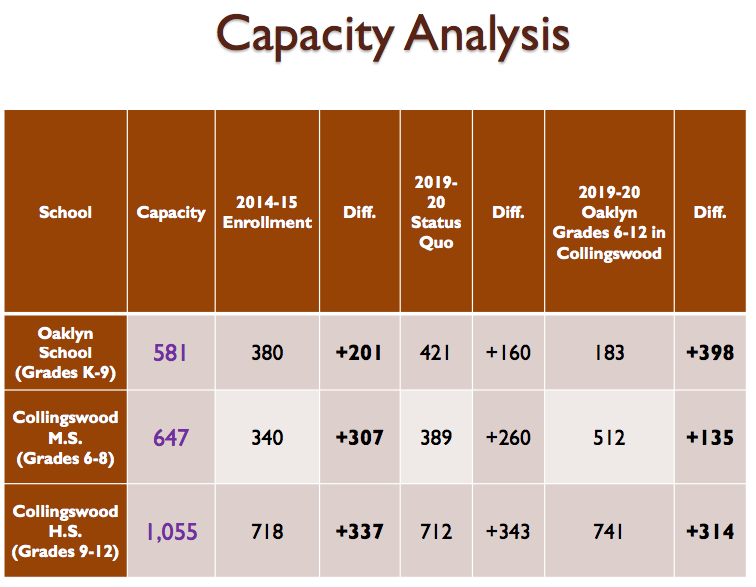 Capacity analysis under different scenarios as presented to the Oaklyn BOE. Credit: Porzio, Bromberg, and Newman.

Without a change, increasing tuition costs based largely in energy, healthcare, and special services fees “will force those expenses higher and leave you less money to spend on [grades] K-9 than you’re spending now,” said financial analyst Jim Kirtland.

If the plan is implemented in the next five years, 130 Oaklyn students would attend Collingswood middle and high schools, resulting in a savings of some $467,000 for Collingswood schools (3 percent of its annual budget) and an increase in $589,000 for Oaklyn taxpayers, assuming Oaklyn students are charged the maximum state-allowable tuition rate.

Even under those terms, however, Oaklyn still wouldn’t be able to afford to pay the maximum allowable rate and retain its small class sizes and activities. Instead, Kirtland suggested, the boroughs could negotiate something like a 30-percent discount, leaving Oaklyn with a marginal tax increase and helping Collingswood save enough money to incentivize the deal.

“My challenge to you is to put your heads together to see if you can find that magic number that will work for Oaklyn and provide an incentive for Collingswood to do it,” Kirtland said. “It’s got to work for both communities or it won’t happen. 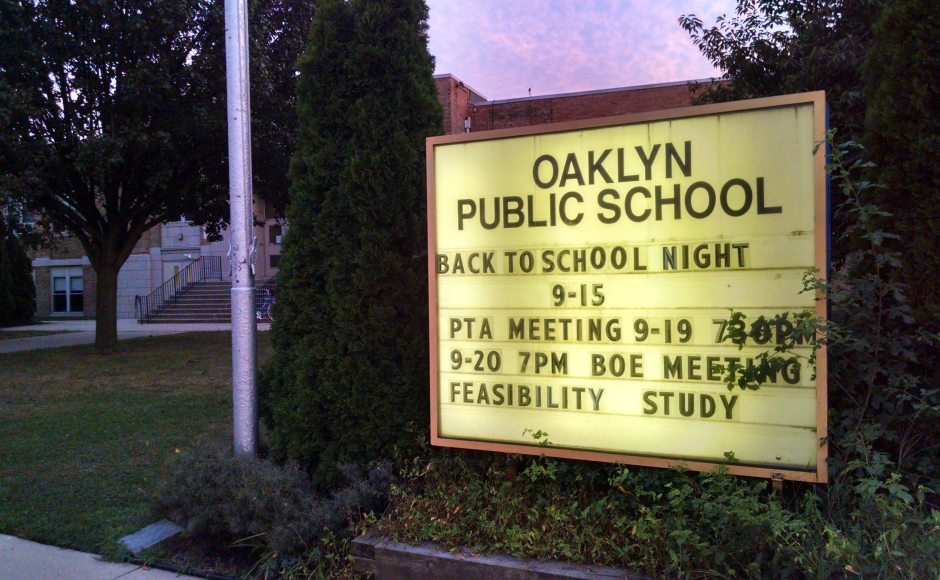 The Oaklyn Public School is examining the feasibility of sending more of its students to Collingswood. Credit: Matt Skoufalos.

“Collingswood saves nothing if they don’t negotiate with you and you don’t send your students to them,” he said.

“How low they’ll be willing to negotiate, we don’t know. But there is a financial benefit if they can negotiate with you and set those send-receive students.”

Gagliardi cautioned that “doing nothing is not a viable option.”

Under the current terms, he said, “every year you will take slower, imperceptible, but very real steps go deprive your existing program of revenue in order to pay an increasing rate to Collingswood.”

Gagliardi told the crowd that his firm dismissed options of regionalization or an outright consolidation with Collingswood because either choice would forfeit the local control the district has enjoyed for years. Instead, he said, a long-term send-receive relationship offers the best chance for success. 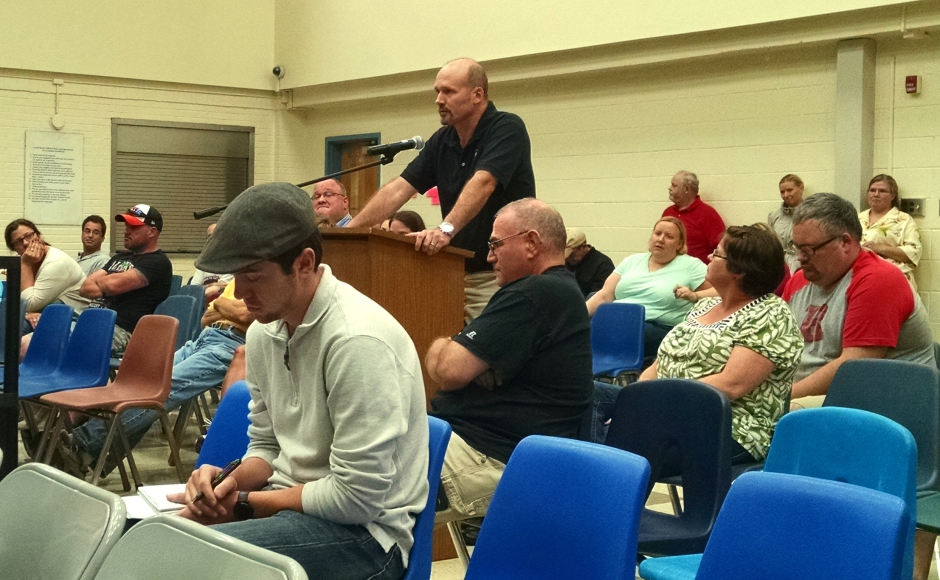 Oaklyn Councilman Charles Lehman said that the district is “the canary in the mine” of statewide communities battling similar funding issues without relief from state aid.

He urged those in attendance to contact their legislators to advocate for school finance reform, saying, “We’re here, in my view, because of them.”

“Expect Trenton to do absolutely nothing or something that won’t help,” Gagliardi countered.

“There is no cavalry coming from Trenton to help you or anyone else until this school is so grotesquely deformed that you wouldn’t recognize it.”

Joint Collingswood-Oaklyn Superintendent Scott Oswald pointed out that the Oaklyn district has already delayed confronting the full realities of its fiscal position because its services are so closely integrated with those of Collingswood. If Oaklyn were to hire its own superintendent and business administrator, which it currently shares with Collingswood, what it would be pay for both positions “would shut your district down,” he said.

“Whatever we decide to do, there are always opportunities to consolidate what are some of the more expensive programs,” Oswald said.

Oaklyn BOE President William Stauts said that exploring send-receive relationships with other neighboring districts like Haddon Township or Audubon haven’t borne fruit. Haddon Township “had no interest” in such a deal, and sending students to Audubon could nullify any savings by adding the additional cost of bussing them there, he said.

Stauts said the “possibly expanded range of services” that could come from offering the additional space at the Oaklyn School to receiving special-needs students could bring in the greatest amount of revenue for the district. Alternatively, renting the extra classroom space to third-party educational groups could provide other funds.

The Oaklyn School is home to some 400 students, but its financial future in the next three years is uncertain at present. Credit: Matt Skoufalos.

Oaklyn Mayor Robert Forbes pledged that the local government would assist “however we can to get to the resolution” of the issue, but asked the board to take its time to consider all courses of action.

“It’s worth it to get to the right decision,” he said.

Collingswood BOE President David Routzahn, who was also seeing the presentation for the first time Tuesday, said the district “would love to do whatever’s possible” to support the Oaklyn students who attend Collingswood.

“It really is all about the students for us,” Routzahn said. “So many of our kids already know each other. There’s so much integration between our kids already, through athletics, academics, and different programs, that it makes a lot of sense to expand the relationship.”

Although the districts would have to find financial common ground, Routzahn believes that expanding their relationship could benefit students by offering a uniform academic experience as early as sixth grade.

“It might ultimately make a lot of sense,” he said.

Without the merger, Oswald said that the “gutting” of the elementary-school programs that would be required could result in larger class sizes and the elimination of the limited co-curricular activities for which the district pays a stipend to advisers, including student council, yearbook, and music programs.

Deepening the send-receive relationship could result in the elimination of as many as eight to 10 middle-school positions in Oaklyn, depending upon whether the tenured teachers in Oaklyn could be absorbed into the Collingswood system or teach at lower grade levels. Any teachers who transfer districts would retain their seniority for retirement purposes, Oswald said.

Oaklyn is not alone in having to make some of these tough choices, the superintendent said.

“Everyone’s going to face this type of thing,” he said. “The position that Oaklyn finds itself in is certainly not unique. Nobody wants to pay more in taxes, but running a school system’s expensive.”