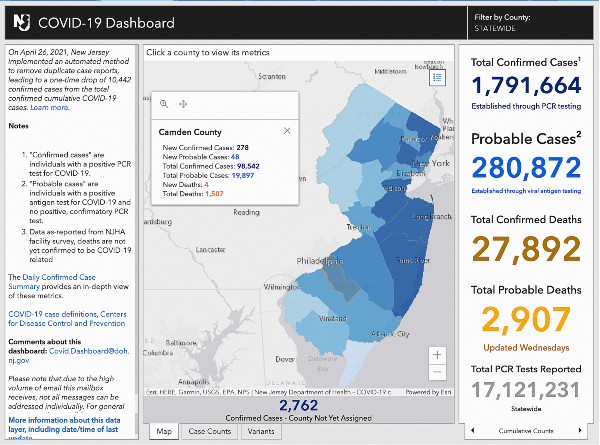 Antigen tests have a faster turnaround time than PCR tests—sometime within 15 to 30 minutes—but are less reliable at detecting active viral infection, and are more capable of reporting false positives.

New infections at the end of 2021 and into the first month of 2022 have been driven by a surge in COVID-19 variant B.1.1.529, “Omicron.” Although cases have fallen by two-thirds from levels seen two weeks ago, totals still exceed the peaks of surges from both the summer of 2021 and winter of 2020.

“The Omicron tsunami which had washed across the state is continuing to pull back,” Murphy said. “We are on the backside of Omicron, but we are not free of it.”

Sadly, 24 more residents have perished from complications related to the virus, bringing the statewide, confirmed death toll to 27,892 lives lost during the pandemic.

In addition to those lab-confirmed fatalities, the state has acknowledged another 2,907 probable COVID-19-related deaths—31 more than previously reported.

More than 17.121 million polymerase chain reaction (PCR) tests for COVID-19 have been performed statewide, with a 20.33-percent positivity rate per 100,000 residents.

The statewide average of COVID-19 spot positivity testing based on PCR test results stood at 15.37 percent January 10; in South Jersey, it was highest, at 17.66 percent.

Rt, the variable that describes the seven-day, rolling-average, statewide rate of transmission of new COVID-19 cases, fell to 0.64 on January 24.

Throughout New Jersey, 4,101 people currently are hospitalized with a suspected (73) or confirmed (4,028) case of COVID-19, Murphy said

Among those hospitalized patients, 711 are in intensive or critical care, and 465 of the ICU and critical-care patients (65 percent) are on ventilators.

New Jersey Health Commissioner Judy Persichilli said that it’s likely cases and hospitalizations may have peaked in the past two weeks.

Nonetheless, the number of those people in hospital remains higher than it’s been during the prior surges, Murphy said.

In New Jersey’s 71 critical care hospitals, 384 patients were hospitalized with COVID-19 yesterday, while 475 others were discharged.

Across the state, long-term care (LTC) centers have reported 2,350 cumulative outbreaks of COVID-19, and 561 are dealing with an active outbreak.

LTCs account for 80,917 infected patients and staff in New Jersey, or 4.5 percent of total cases.

That includes 44,797 residents and 36,120 staffers sickened by the virus, as well as 8,936 lab-confirmed resident and staff deaths (32 percent of the statewide confirmed total), with facilities self-reporting 165 staff deaths.

“The high transmissibility of omicron has become problematic for healthcare workers who have fallen ill, and it has fueled new outbreaks in our nursing homes,” Persichilli said.

She cited the 560 active LTC outbreaks reported in the past week, which account for 10,500 resident cases and 12,800 staff cases.

The commissioner also noted that, although nearly 81 percent of LTC residents have received vaccine boosters, only 44 percent of LTC staffers have done so. Statewide, booster rates are “at an unacceptably low 49 percent,” Persichilli said.

Of 621 veterans residing in three state-run homes, 456 residents have tested positive for COVID-19, and 166 have died from complications related to the virus—three more than previously reported. Forty-one currently are COVID-19-positive.

The facilities at Menlo Park, Paramus, and Vineland are staffed by 1,365 workers, 76 of whom are presently COVID-19-positive. The facilities have sustained two staff deaths related to the virus.

At state-run psychiatric hospitals, 378 of 1,141 patients and 1,136 staff members have tested positive for COVID-19. At least 14 patients and eight staffers have died from complications related to the virus; 114 patients and 206 staffers are currently positive. 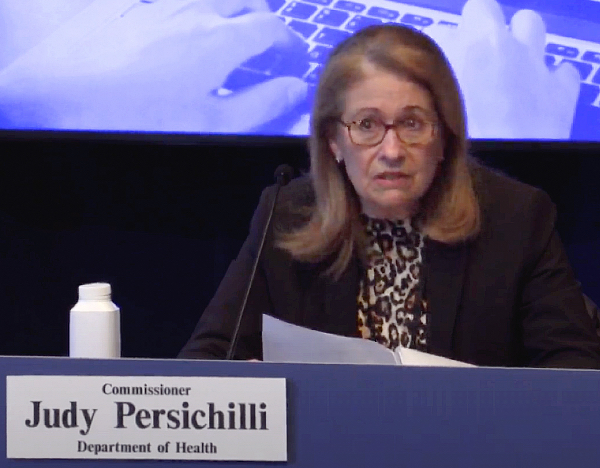 To date, 166 New Jersey children aged 1 to 18 have been diagnosed with pediatric multisystem inflammatory syndrome (MISC)—10 more than previously reported.

“On Friday, we received six reports of new cases of MISC in children, the most in a single day,” Persichilli said.

“All are currently hospitalized.”

Five MISC cases have been reported in Camden County, which is tied with Cumberland and Monmouth Counties for fourth-fewest in the state.

New Jersey has sustained four COVID-associated child deaths, including those of three infants, since Christmas, Persichilli said. None of those children had significant underlying conditions that could have compromised their immune response to the virus, she added.

“The fact that we’ve had significant deaths in zero-to-four-year-olds is beyond me,” she said.

Overall, the state has lost 12 children of COVID-related causes throughout the pandemic: eight of them have been younger than four, and four others were aged five to 17. One additional child has died from MISC-related complications.

Persichilli called it “a reminder that COVID-19 isn’t always a benign illness in children,” and called for residents aged 5 and older to “get vaccinated to protect those who are too young” to receive a shot.

“Make sure those around your infants are up-to-date on COVID-19 vaccines, and avoid crowded gatherings,” she said.

Since the start of the 2021-2022 school year, 406 reported outbreaks—three or more students or staff who contracted the virus within the school—have been logged, affecting 2,365 people, a mix of students and staff.

In Camden County, 43 COVID-19 outbreaks have accounted for the in-school infections of 325 people, which is the largest case count and second-largest outbreak count of any county in the state, and more than the county had sustained in the entire prior school year.

More than 13.905 million primary-series COVID-19 doses have been administered in New Jersey, with 6.342 million people having been fully vaccinated in-state, having received either a one-shot formulation from Johnson and Johnson or both doses of the two-shot Pfizer or Moderna vaccines.

Some 75 percent of the state population that is eligible for vaccination has completed its full vaccination series; however, booster rates remain low, Persichilli said.

The commissioner also noted that hospitalization of vaccinated individuals who’ve had a COVID-19 booster is three times lower than those who’ve only gotten a primary vaccine series.

In Camden County, 709,007 doses have been administered, seventh-most in the state; 341,461 people have been fully vaccinated.

An estimated 545,862 vaccine doses have been administered to New Jersey residents outside of the state, of which 219,071 residents are estimated to have been fully vaccinated.

The unvaccinated remain at the greatest risk of serious illness or death from COVID-19, Persichilli said, urging all residents to receive their shots and boosters; so far, only 46 percent of those eligible have received a booster.

The health commissioner said she is especially concerned for the 520,000 New Jersey children who are too young—under the age of five—to be vaccinated. 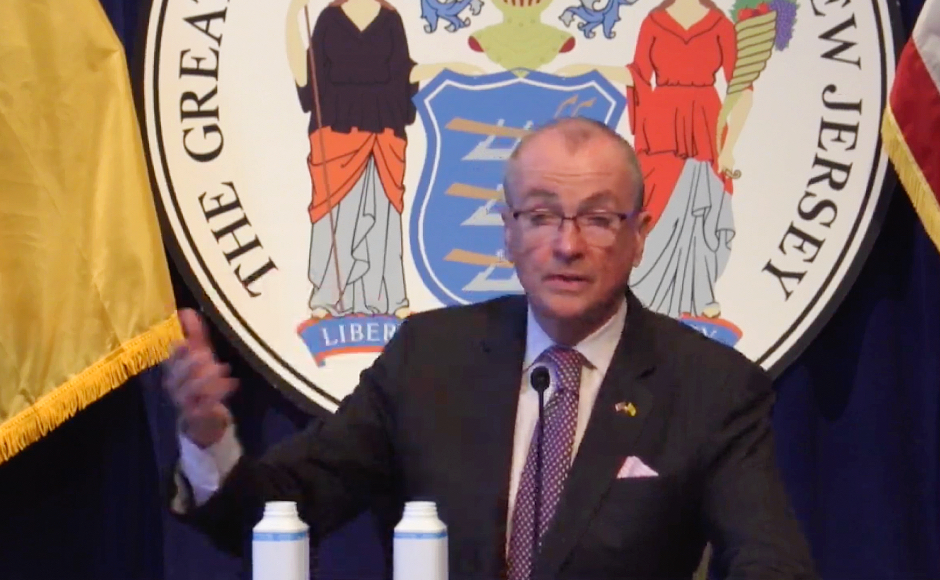 By mid-July, that number had increased to 5.019 million people fully vaccinated at New Jersey vaccination sites.

At the end of August 2021, the state had exceeded 11 million doses administered and had begun approaching 6 million fully vaccinated residents.

It took until mid-October 2021 to clear the 12-millionth vaccine dose administered, at a time when some residents began receiving booster doses or third doses. By late October, New Jersey finally reached an estimated 6 million fully immunized residents, nearly three months after having crossed the 5-million-resident threshold. Since then, primary series vaccination rates have stalled.

Murphy urged all residents who are eligible for the COVID vaccine to receive it, likening being unvaccinated to drunk driving.

“You’re not only putting yourself at risk, you’re putting others at risk,” he said.