Trending
You are at:Home»Government»Coronavirus Update: 799,391 Infections, 21,993 Related Deaths; Hospitalizations Up, and Officials Warn of Possible Case Spikes After Holidays

The governor presented a pair of case modeling scenarios that presume moderate and high impacts of increasing numbers of cases seen across the state. 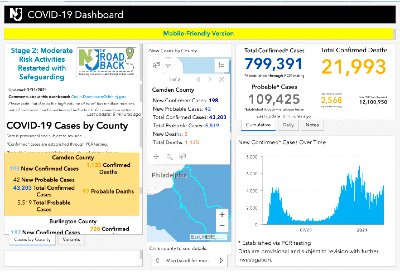 Sadly, 44 more residents have perished from complications related to the virus, bringing the statewide, confirmed death toll to 21,993 lives lost during the pandemic.

In addition to those lab-confirmed fatalities, the state has acknowledged another 2,568 probable COVID-19-related deaths—33 more than previously reported.

More than 12.1 million polymerase chain reaction (PCR) tests for COVID-19 have been performed statewide, with an 9.06-percent positivity rate per 100,000 residents.

The statewide average of COVID-19 spot positivity testing based on PCR test results stood at 14.26 percent March 27; in South Jersey, it was lowest, at 11.7 percent.

Rt, the variable that describes the seven-day, rolling-average, statewide rate of transmission of new COVID-19 cases, hit 1.09 on March 29.

Hospitalizations on the rise again

Among those hospitalized patients, 458 are in intensive or critical care, and 236 of the ICU and critical-care patients (52 percent) are on ventilators.

In New Jersey’s 71 critical care hospitals, 344 patients were hospitalized with COVID-19 yesterday, while 298 others were discharged.

New hospitalizations across the state are up 28 percent in the past two weeks, as are ICU patients and hospitalized persons overall, said New Jersey Health Commissioner Judy Persichilli.

Younger people are being hospitalized at greater rates in the last few weeks of March, Persichilli said, with those aged 40 to 49 up 48 percent over prior levels. 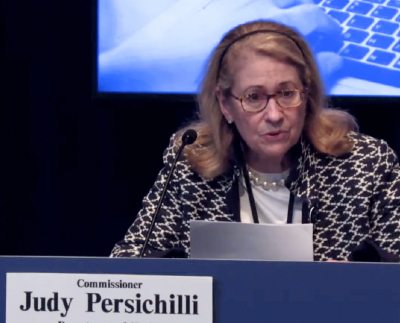 Across the state, long-term care (LTC) centers have reported 1,324 cumulative outbreaks of COVID-19, and 226 are dealing with an active outbreak.

LTCs account for 54,032 infected patients and staff in New Jersey, or 6.7 percent of total cases.

That includes 32,505 residents and 21,527 staffers sickened by the virus, as well as 7,989 lab-confirmed resident and staff deaths (36 percent of the statewide confirmed total), with facilities self-reporting 143 staff deaths.

Presently, five veterans are hospitalized with COVID-19; 422 have recovered from the virus.

To date, 111 New Jersey children aged 1 to 18 have been diagnosed with pediatric multisystem inflammatory syndrome (MISC), Persichilli said. Four of those cases were reported in Camden County, fifth-least in the state.

Since August 1, 2020, 221 COVID-19 outbreaks encompassing 1,002 individual cases have been traced to schools in 19 New Jersey counties. In Camden County, 16 outbreaks have been linked to 74 cases, fifth-most in the state.

Across New Jersey, 4.225 million COVID-19 inoculations have been administered, 2.739 million of which are first doses.

Throughout the state, 1.57 million people are fully vaccinated, having received either a one-shot formulation from Johnson and Johnson or both doses of the two-shot Pfizer or Moderna vaccines.

In Camden County, 255,877 doses have been administered; seventh-most in the state.

The first vaccines in the state were administered December 15, 2020; by February 8—55 days later—New Jersey had immunized its millionth resident. Twenty days thereafter, that count hit 2 million, and 3 million within two more weeks. On March 29, New Jersey crossed the 4-million-dose threshold.

Mutated offshoots of COVID-19, or “variants of concern,” continue to circulate throughout New Jersey; Persichilli reported that the state has traced 575 such cases to date.

The most common COVID-19 variant in the United States is the B.1.1.7, or “UK” variant, which has been spotted in at least 16 New Jersey counties.

The first case of the B.1.351, or “South African” variant, in New Jersey was identified two weeks ago, and the state also has multiple reported cases of the P.1 “Brazilian” variant.

Cases have also been reported of two different California variants as well as 65 instances of strain B.1.526, which has been reported as originating in New York. 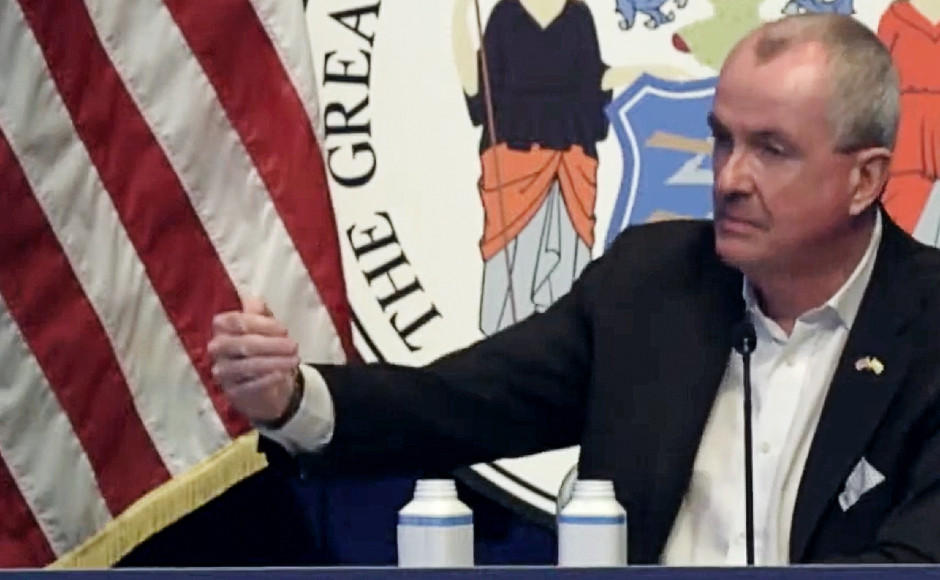 Although vaccination rollouts are increasing across the state, community spread of COVID-19 and the prevalence of a number of viral variants of concern have led New Jersey health officials to project a steady increase in new cases in the spring and summer months.

On Wednesday, Murphy laid out a pair of predictive models that presume both moderate- and high-case scenarios based on data gathered throughout the past year.

“These are projections, not certainties, and through our behavior, we can change the trajectory of the models,” the governor said, renewing his call for pandemic mitigation behaviors including mask-wearing, hand-washing, and social distancing.

The moderate-case model assumes that hospitalization trends will follow rates and trends observed after prior religious holidays and the expansion of indoor activities, including indoor dining, and spring break, Murphy said. It also considers anticipated increases in vaccinations, and assumes vaccines will be 95 percent efficacious against all COVID-19 variants. 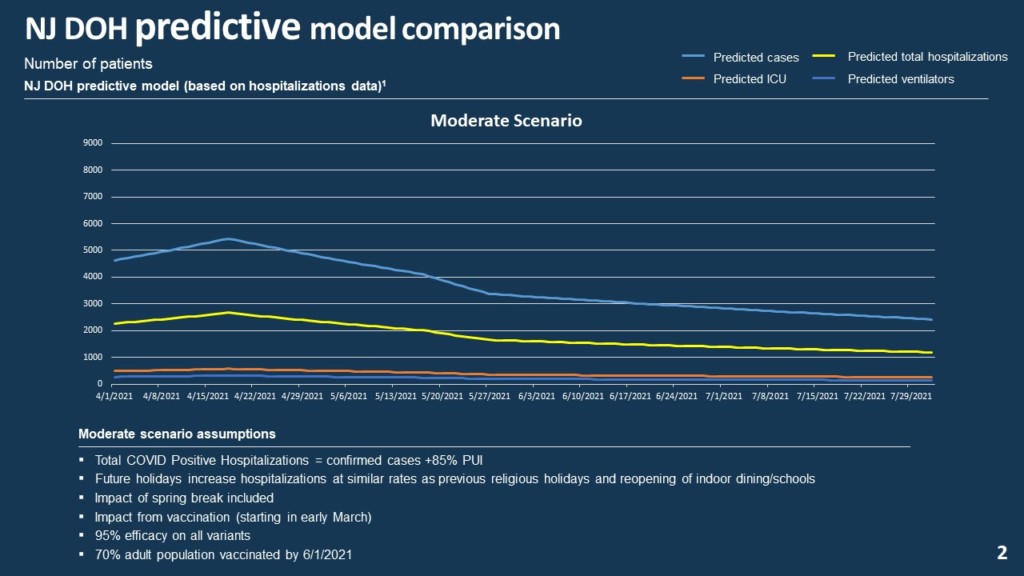 In the moderate-case scenario, New Jersey would hit 5,000-plus new infections daily throughout April, with an April 18 peak of 5,445 new positive, 2,669 hospitalizations, and 574 ICU patients, 319 of which on ventilators.

“This feels to me closest to the reality we’re dealing with,” the governor said.

The high-case model makes many of the same assumptions, but also forecasts higher rates of infection after holidays, a stronger impact from COVID-19 variants, and only a 65-percent vaccine effectiveness. It presumes a higher rate of hospitalizations than seen in the past, plus broader community spread of the virus “as people lower their guard with the warmer weather,” Murphy said.

“We would basically be back to where we were in December and January, when the second wave was crashing down on us,” he said. 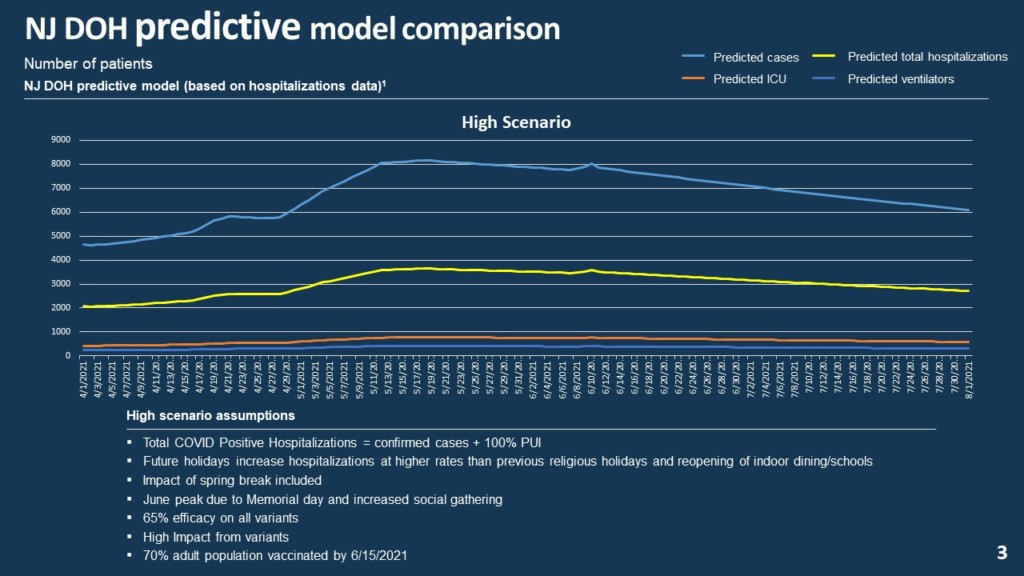 In the high-case scenario, New Jersey would see more than 8,000 new infections daily by mid-May and again in mid-June, with hospitalizations settling into the 3,500-patient range during that same time. ICU counts wouldn’t retreat until late July, with ventilators in high demand until late August.

“Under this scenario we’re in for a long, hot summer,” Murphy said.

The governor said that the numbers don’t lead him to believe that New Jersey hospitals would be overwhelmed by the impact of the new cases, but that “the length of the calendar” is more of a concern. However, he restated that the models outlined are “not certainties,” and can be affected by the behavior of individuals.

“It is a matter of cause and effect,” Murphy said. “Human behavior can bend these curves.”

New Jersey residents can now locate an appointment for their COVID-19 vaccinations through the state pandemic dashboard.

The search mechanism at Covid19.nj.gov/finder provides a list of available vaccine appointments at sites in every county across the state.