Trending
You are at:Home»Government»Coronavirus Update: 888,074 Infections, 23,569 Related Deaths; NJ to Roll Back Megasites, Target Vaccinations in Communities of Need

On the occasion of the 200th COVID-19 briefing, Governor Phil Murphy touted New Jersey’s vaccination successes and its plans to reach those who are still most in need of immunizations. 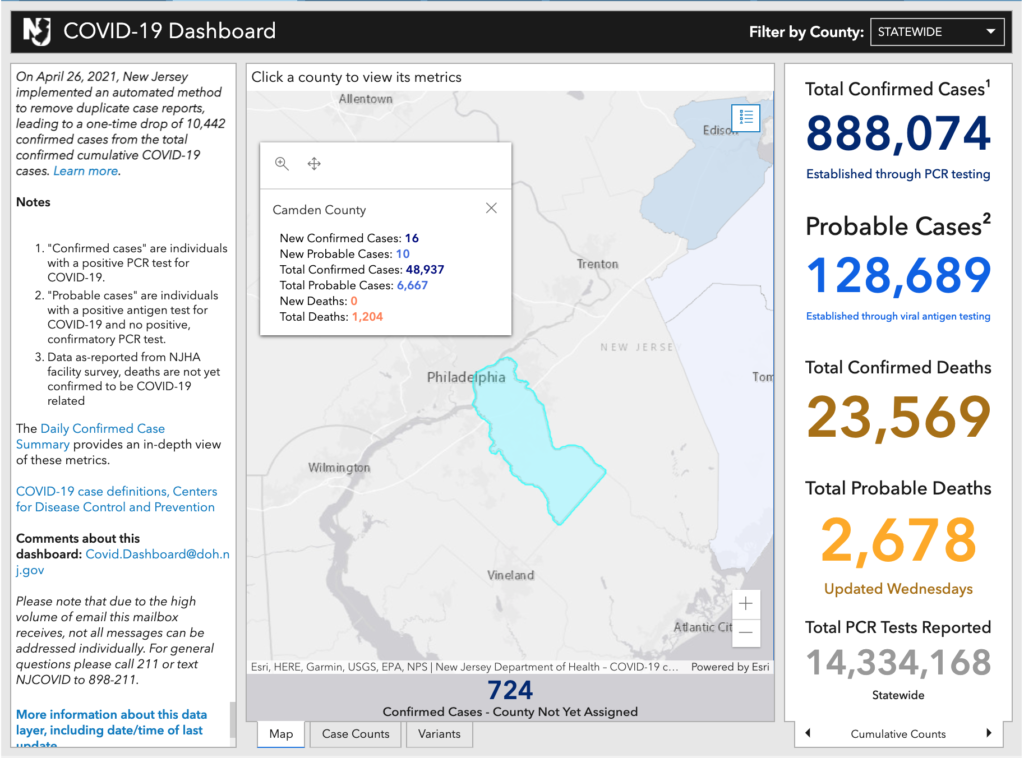 Sadly, 20 more residents have perished from complications related to the virus, bringing the statewide, confirmed death toll to 23,569 lives lost during the pandemic.

In addition to those lab-confirmed fatalities, the state has acknowledged another 2,678 probable COVID-19-related deaths—eight more than previously reported.

More than 14.334 million polymerase chain reaction (PCR) tests for COVID-19 have been performed statewide, with a 10.098-percent positivity rate per 100,000 residents.

Wednesday’s briefing was the 200th of the pandemic, and New Jersey government officials were joined by White House Coronavirus Response Coordinator Jeff Zients, who offered some national perspective on the status of the pandemic.

“Today, just four-and-a-half months later, we’re down to fewer than 21,000 cases per day and deaths have dropped by 85 percent across the country,” he said, adding that New Jersey has observed a 93-percent decline in that same time period.

“The light at the end of the tunnel is getting brighter and brighter each day,” Zients said.

The statewide average of COVID-19 spot positivity testing based on PCR test results stood at 2.12 percent May 29; in South Jersey, it was higher, at 2.39 percent.

Rt, the variable that describes the seven-day, rolling-average, statewide rate of transmission of new COVID-19 cases, hit 0.73 on May 31.

Hospitalizations down to October 2020 levels

Throughout New Jersey, 518 people currently are hospitalized with a suspected or confirmed case of COVID-19, Murphy said.

It’s the fewest number of hospitalized patients in the state since October 4, 2020.

Among those hospitalized patients, 120 are in intensive or critical care, and 70 of the ICU and critical-care patients (58 percent) are on ventilators.

In New Jersey’s 71 critical care hospitals, 40 patients were hospitalized with COVID-19 yesterday, while 47 others were discharged.

Across the state, long-term care (LTC) centers have reported 1,470 cumulative outbreaks of COVID-19, and 117 are dealing with an active outbreak. LTCs account for 55,157 infected patients and staff in New Jersey, or 6.2 percent of total cases.

That includes 32,886 residents and 22,271 staffers sickened by the virus, as well as 8,055 lab-confirmed resident and staff deaths (34 percent of the statewide confirmed total), with facilities self-reporting 144 staff deaths.

Of 624 veterans residing in three state-run homes, 456 residents have tested positive for COVID-19, and 156 have died from complications related to the virus. Three hundred veterans have recovered from the virus.

At state-run psychiatric facilities, 367 of 1,122 patients and 1,071 staff members have tested positive for COVID-19. Fourteen patients and eight staffers have died from complications related to the virus.

To date, 126 New Jersey children aged 1 to 18 have been diagnosed with pediatric multisystem inflammatory syndrome (MISC). Four of those cases were reported in Camden County, tied with Cumberland and Monmouth Counties for third-least in the state.

Across New Jersey, 9.083 million COVID-19 inoculations have been administered.

Throughout New Jersey, 4.091 million people have been fully vaccinated in-state, having received either a one-shot formulation from Johnson and Johnson or both doses of the two-shot Pfizer or Moderna vaccines.

In Camden County, 467,066 doses have been administered; seventh-most in the state.

An estimated 357,974 New Jersey residents have received a vaccine dose outside of the state, of which 167,908 are estimated to have been fully vaccinated.

Mutated offshoots of COVID-19, or “variants of concern,” continue to circulate throughout New Jersey; the state has traced 4,395 such cases to date.

Persichilli said early reports indicate that breakthrough cases seem to be statistically small: just 0.02 percent of those who have been vaccinated against COVID-19 have contracted the virus afterwards. 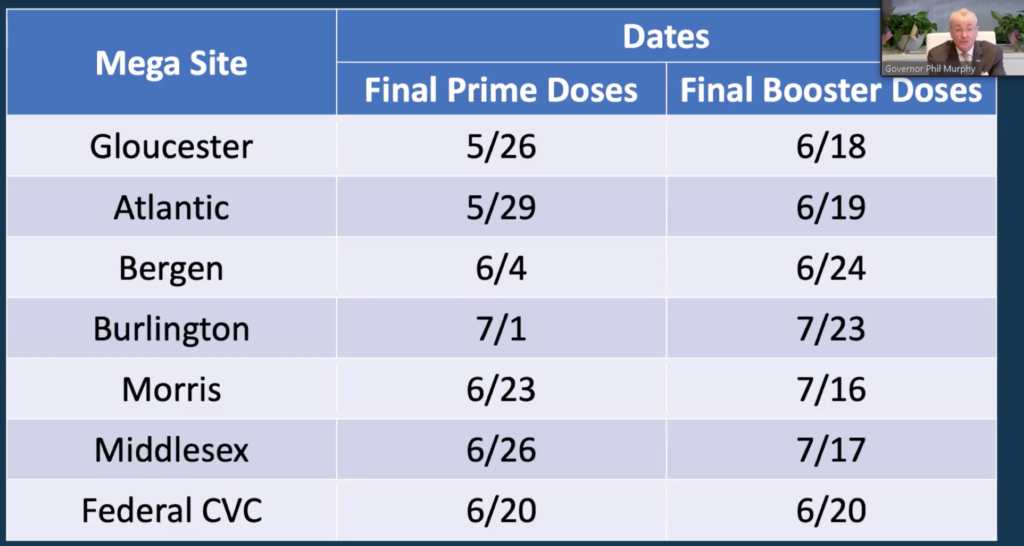 As those numbers continue to improve, Governor Murphy announced that the state will begin moving to decamp its six vaccine megasites across the state as well as the federally run community vaccination center at the New Jersey Institute of Technology, with the final initial and booster doses in the state being administered at the Burlington County megasite (the Moorestown Mall) in the month of July.

Altogether, 1.967 million doses were administered at the megasites, and 954,204 people were fully inoculated there.

With greater vaccine ubiquity, officials are focusing on taking doses into communities of need, and recommending that those who wish to be vaccinated seek out doses at their community pharmacies, primary care physicians, and elsewhere, including community sites at houses of worship.

“For the past five months, these sites have been the backbone of our overall vaccination efforts as we built out and into every community across the state,” Murphy said.

“We still have work to do, but we are now at the point where our attention will be focused on the local and community-based sites we’ve spent the better part of the past six months building and supporting.”

The governor also noted that every employer must honor earned sick leave that any worker wishes to use to travel to or from a vaccination location, or to take a day off if side effects require it.