New Jersey will spend $57 million to outfit every uniformed officer in the state with a body camera while on duty. Officials say the technology can help de-escalate incidents and cut use of force incidents in half. 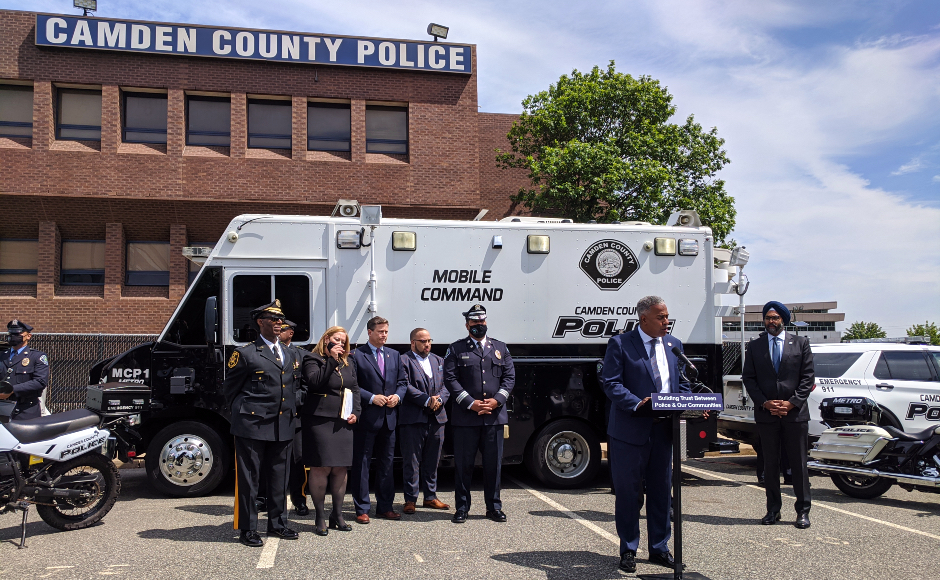 All uniformed police officers in New Jersey are now required to employ body-worn cameras while on duty.

On Tuesday, New Jersey Governor Phil Murphy visited the Camden County Police Department to mark the first day in which the new policies have taken effect.

Camden City Mayor Victor Carstarphen said the county metro division is the largest law enforcement agency in South Jersey to implement body-worn cameras, which he said have helped “to protect and hold accountable” both sworn officers and members of the community.

Thanks to a combination of contemporary training, de-escalation techniques, progressive policing policies, and use of next-generation technology, including the cameras, within the department, “our neighborhoods are now the safest they have been in decades,” Carstarphen said,

Camden County Police Chief Gabriel Rodriguez described the body-worn cameras, which have been used by his department for the past five years, as the “key to transparency and trust in our communities.”

“This is not about that ‘gotcha’ moment of catching officers in the act of wrongdoing,” Rodriguez said. “This is about making them better.”

Use of the cameras helps ensure “strong bonds of trust between law enforcement and the people they serve,” said Governor Phil Murphy, who described the moment as “an opportunity to cement New Jersey’s role as a leader in smart police reforms.

“Body cameras alone cannot make communities safer,” Murphy said, however, he deemed them “a wise, all-around investment in public safety and justice,” and a critical tool in community policing practices. 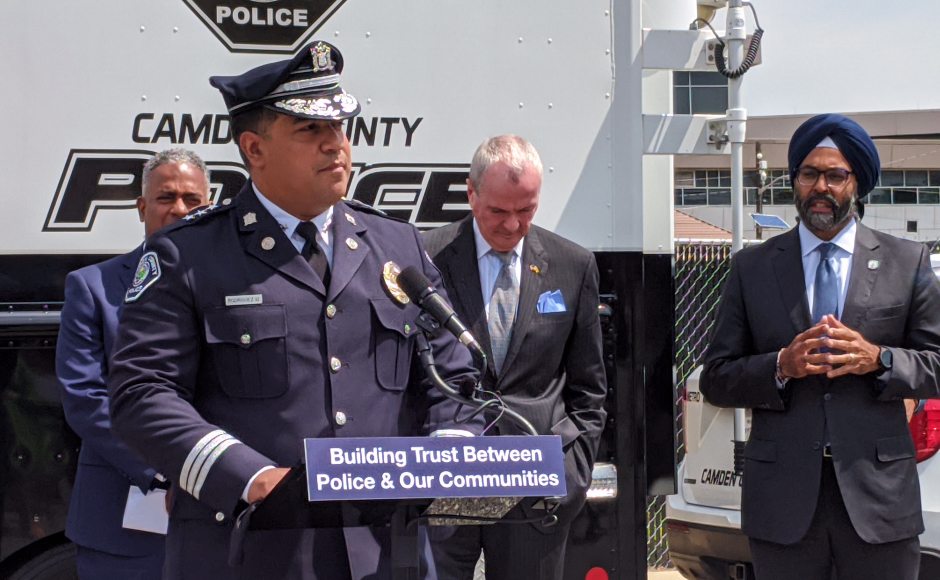 The cameras “ensure that there is an impartial record that can be used fairly in investigations and in courts,” the governor said, noting that every department across the state must follow uniform rules and requirements for their use.

New Jersey Attorney General Gurbir Grewal described the value of the cameras and the video evidence they generate as “a tremendous tool for accountability.

“Not only does the public want the accountability of video tape, so do officers,” Grewal said.

“All people behave better when they know that they are on tape.”

According to the statewide policy that informs the use of body-worn cameras, officers are required to notify people with whom they interact that they are being recorded “whenever safe and feasible.” Only a few exceptions to this requirement exist, including “undercover assignments, administrative duties, or working with confidential informants,” according to a directive Grewal issued last week.

The policy says that the cameras can be used “only in performance of official police duties, and not for personal purposes,” and that the footage they collect may be accessed only in keeping with official purposes outlined in that policy. Anyone knowingly violating these requirements is subject to discipline.

The cameras may also be deactivated at the request of a crime victim; when officers encounter people who wish to remain anonymous while assisting law enforcement; or within a private residence, unless the officer is investigating a crime, responding to an emergency, or believes he or she “will be required to use constructive authority or force.”

“These cameras can cut in half the number of times force is used by law enforcement,” Grewal said.

The footage they capture may also be used in professional development, as filmed encounters can help enhance officer training, he said. 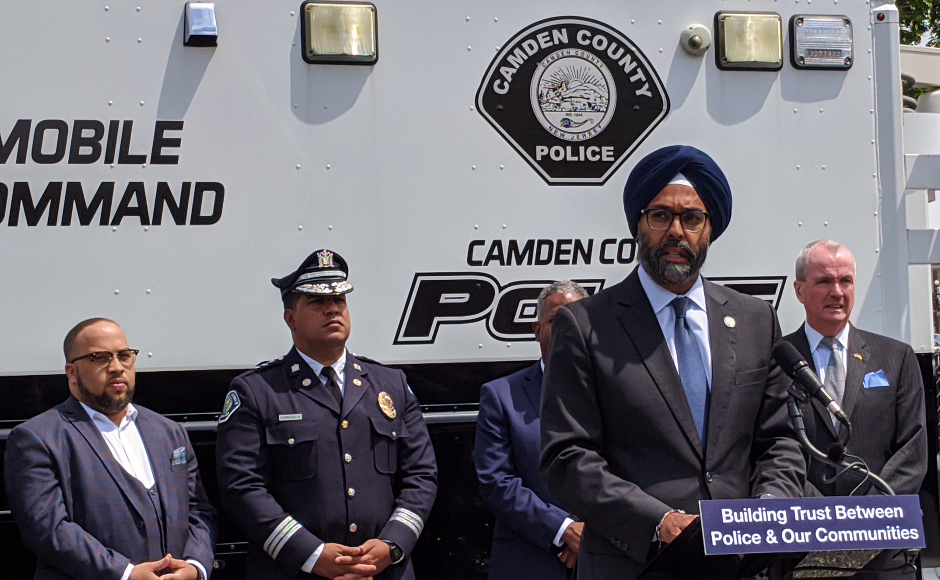 Across New Jersey, 487 departments applied for and were awarded $57 million in reimbursement grants for their expenditures on body-worn cameras, digital storage, and other equipment costs related to implementing the technology.

Cameras typically cost $400 to $800 apiece; Grewal said the grants reimburse agencies at $2,000 per camera to account for related costs.

Departments may make qualifying purchases from January 1, 2021 through the end of 2025.

The attorney general said the state legislature will require an assessment of the program rollout before requisitioning any additional grants to sustain it.

“Although that’s a substantial cost, the impact will be substantial as well,” Grewal said. The value of the “incontrovertible evidence” the cameras can provide may help push a defendant to take a plea bargain, or speed up the disciplinary process for an officer accused of wrongdoing, he said.

More importantly, however, if they save lives by inhibiting the use of deadly force, that’s a benefit upon which law enforcement agencies “can’t put a cost,” Grewal said.

The universal use of body-worn cameras is part of an effort to improve policing in New Jersey that includes ICAT de-escalation training, a professional police licensing framework that’s anticipated later this year, and continued discussions about ending qualified immunity for officers in civil court.

The last of these issues, qualified immunity, “makes accountability more difficult,” and will require legislative action to address, which Grewal termed “a challenge.” 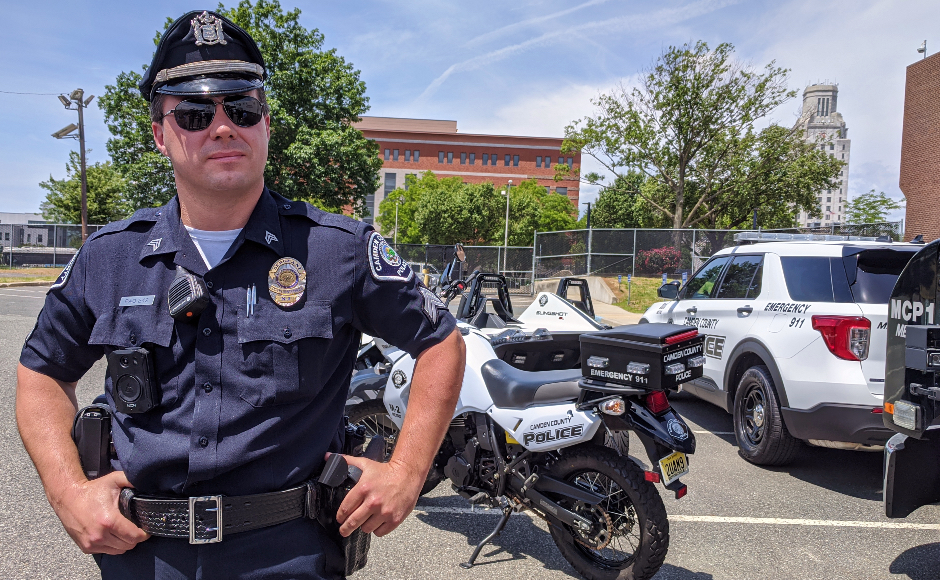 “Cameras are the truth-tellers,” Norcross said.

“They don’t lie. It gives you a true assessment of what happened.”

Camden County Police Sergeant Nicholas Rao said his experience with use of the body-worn cameras has been mostly positive, and helps present footage of encounters “through the eyes of the officer, firsthand, and in real time.”

“It’s been a really good tool to have when we engage with the public,” Rao said.