More than 1,200 applicants began their pursuit of a handful of openings with the department. Chief William ‘Bud’ Monaghan invited the public to observe the process. 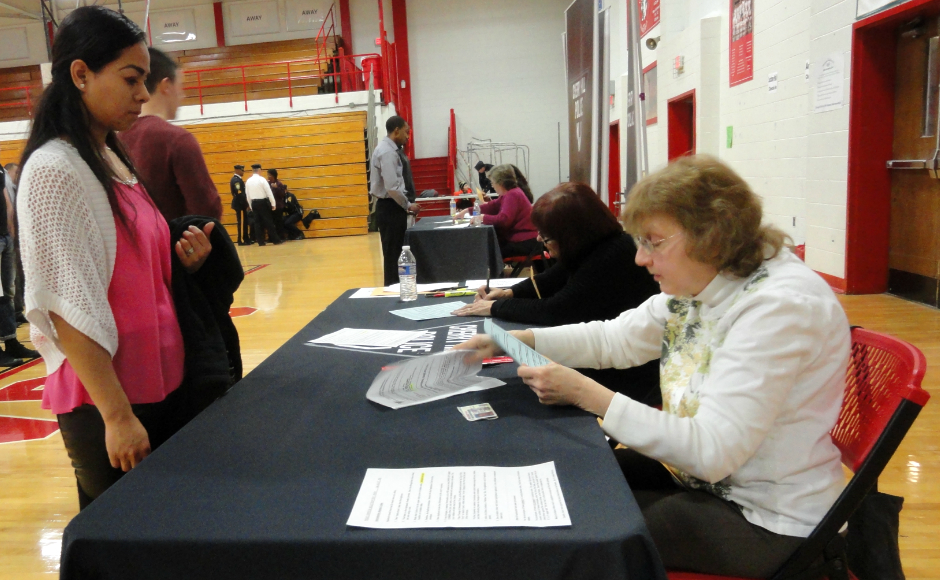 It was not yet 8 a.m. on a Saturday, and the line stretched out the front doors of Cherry Hill East High School, around the building, and into the parking lot.

They were all there to test, but none of them were high-school students.

Over the weekend, the Cherry Hill Police Department hosted some 1,200 hopefuls for a handful of officer positions, a large pool that had already been culled from the 2,300 people who’d requested an application.

In 2013, the last time the department offered the exam, those numbers were 500 and 550, respectively—an indication both of interest in the job and the long odds of earning one.

The department employs 131 full-time officers and another six or eight part-timers, and is only looking to hire about 20 replacements in the next few years, said Chief William “Bud” Monaghan. With national attention given to conversations about relationships among police departments and the communities they serve, Monaghan took the opportunity to open up the recruitment process to the public for the first time.

“People need to trust that we’re making sound hires,” he said. “Without anyone seeing what we do, perception could be jaded negatively towards us.”

The department tried “to cast as wide a net as possible” to ensure the diversity of applicants, Monaghan said, and the demographic makeup of the candidates selected for the written test runs quite close to ethnic populations in Camden County and New Jersey overall.

“We are an extremely educated workforce,” Monaghan said.

The chief called the officers the “heartbeat and soul of the organization” and “the foundation of what we represent.

“It’s so important to make sure that you get the hires right because these are people representing the organization, and they need to represent the people they serve,” Monaghan said. “Our reputation extends beyond the borders of Cherry Hill.”

The Cherry Hill Police Department isn’t the highest-paying in the region, but its 97-percent retention rate bespeaks a work environment with a variety of assignment options, Monaghan said. Those include traffic safety, motorcycle patrol, SWAT, crisis negotiation, and a detective unit with various specializations. The chief described these as opportunities for “lateral advancement” contributing to a healthy work environment.

‘It’s important to see who we are from the beginning’

Those who pass the written test have only cleared an early hurdle in an extensive process that also includes a physical agility test, an oral interview, a background check, medical clearance, a psychological evaluation, and a drug screening.

Applicants then attend the Camden County Police Academy for 22 weeks, followed by another 18 weeks of field training before they patrol on their own. The written test washes out a lot of applicants, but many also bow out of the process during background checks for “lies of omission,” Monaghan said.

“Being dishonest in your application is a guarantee you’ll be dishonest at some point in the career path,” the chief said. With an officer’s credibility relied upon in court testimony and the construction of legal casework, such a risk is unacceptable, he said.

“With the perception of police departments, it’s important to see who we are from the beginning, and how and why we do what we do,” Monaghan said.

Pastor Patty Harris of the First Baptist Church of Cherry Hill said she was impressed with both the discipline of the process and the diversity of the applicant pool. Both demonstrated that the department is in touch with the values of the community and its residents, she said.

“Everyone has an opportunity,” she said. “Everyone is treated fairly.

Emma Waring, President of the Cherry Hill African-American Civic Association, was taken with the commitment of the candidates to the process, from their physical presentation to the diversity of their composition.

“You have an interest in where you live,” Waring said.

“He is really a chief that is reaching out to all people in the community,” McCargo said. “I know he is looking forward to diversifying the police department wherever he can.”

McCargo, who has lived in the township since 1946 and has served on the local board of education as well as the police and fire departments, said that Monaghan was making the most of a critical opportunity for community outreach.

“Many times when you can sit at the top levels, you can explain things that everybody can learn,” he said. “Through that learning process, they can put things in place that they may not have had there prior. You have to concentrate on that opportunity to explain things to everyone. By having a better understanding, you can move forward.”