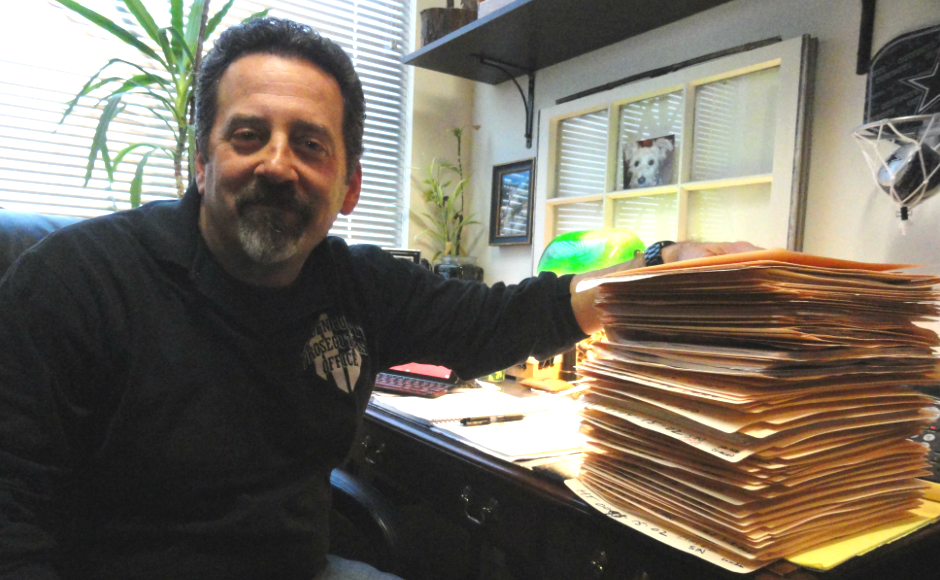 A member of the Magnolia school district Board of Education and a middle-school crossing guard to boot, Kube is the 24th county resident—and far and away the oldest—to have had such charges brought against him this year.

At first blush, Kube’s age and professional involvement with schoolchildren would seem to elevate the profile of his case. But Detective Sergeant Thomas DiNunzio, who leads the CCPO High-Tech Crimes investigative unit, said the arrest simply shows that suspected offenders are not easily profiled.

“It’s a strange affinity,” DiNunzio said. “We’re just learning that it’s so prevalent. Age of offenders ranges from 17 to now 80; all different nationalities, all different geographical areas, from Camden City to Haddon Heights.

“They’re so diverse,” he said. “There’s no specific identity to these people. You really do have to be vigilant.”

DiNunzio, a former narcotics officer, compared child pornography offenders to drug addicts, and likened the compulsive behaviors of the two.

Unlike an addict, whose family may support him or her through the recovery process, a person convicted of child pornography is more likely to be isolated forever from his support network.

“When you lock somebody up for drugs, they instantly say, ‘I knew he was [using]; I didn’t know he was selling. ‘We’ve got to find a rehab,’” DiNunzio said. “When you find somebody caught for child pornography, it destroys the family.

“It creates divorce,” he said. “Kids are pulled from their parents. They’re shocked. They can’t wrap their heads around it. Nobody can understand it. Every one we’ve been to had a spouse; someone that they were able to hide it from. [Kube] is a crossing guard, a school board member, and totally bamboozled his wife.”

In terms of behavior, offenders will often start by viewing still pornographic images, and will then move to videos and possibly online chat services, DiNunzio said. One recent case involved Skyping with live victims as young as two and four. The youngest victims in images that his investigators have discovered include seven- and eight-month-old babies, and after months and years of confronting these crimes, DeNunzio does not mince words about what he’s seen.

“My definition of what I’m seeing is becoming more bold,” he said. “I don’t say they’re being sexually exploited. They’re being raped. They’re being molested on videos. You’re seeing a child abuse case playing out. We’re not talking about babies in bathtubs [or]family photo albums.”

Worse yet, DiNunzio said, the children involved in these cases are being re-victimized each time the photos and images are viewed and shared. Even if the people he arrests are not producing child pornography, watching it is “keeping that crime alive,” he said.

“People, especially adults, are sharing everything on the Internet,” DiNunzio said. “There’s always naked people on the[ir]phones. They don’t realize how far it’s going to go. They just don’t.” 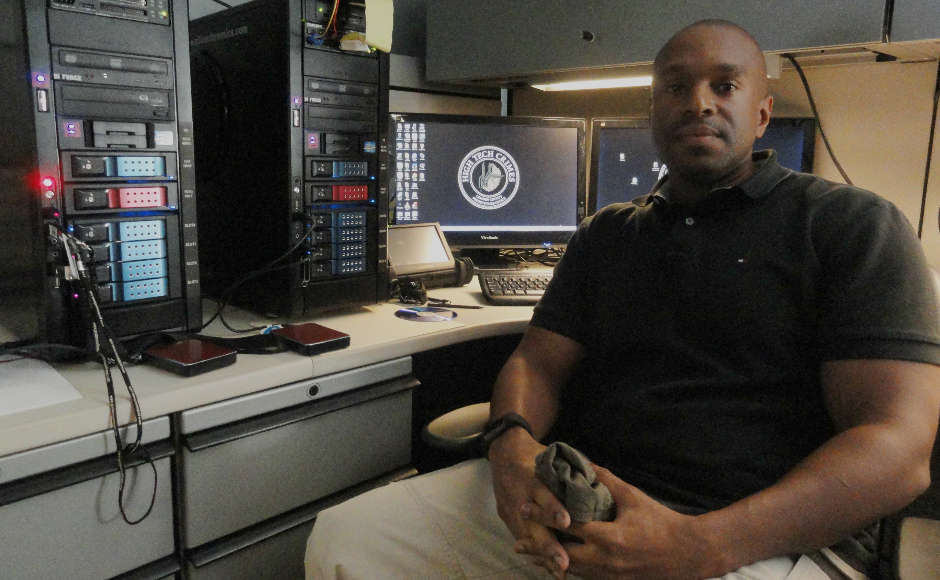 ‘The computer does half the job, and you do the remainder’

“The beautiful thing about computers and cellular devices is that everything you do is logged on that particular device,” said Detective Jason Malone.

“Nothing in the computer world is ever really deleted. It’s like when you step into a shallow pool of mud; it’s going to leave a footprint.”

Malone has been working with the High-Tech Crimes unit for 18 months. Part of his responsibility involves forensic examinations of computers, hard drives, or other digital storage devices seized in the execution of a warrant.

“The computer does half the job, and you do the remainder of it,” Malone said. “You have to be patient and work through the data, and use the strengths of the machine to help accentuate your investigation.”

Case leads can be generated from anonymous tipsters or from websites like Google, Facebook, or Twitter, which self-report to authorities like the National Center for Missing and Exploited Children (NCMEC) when they encounter pornographic images on their servers. Investigators also use intercepting software on peer-to-peer file-sharing services that identifies secure hashtag algorithm (SHA) values associated with file encryption.

“The FBI has a database of all these SHA values,” DiNunzio said. “Once they see that value being intercepted on the Internet, they know that it contains child pornography.”

From there, detectives track the Internet Protocol (IP) address to which the file was transmitted via a reporting mechanism through the emergency 9-1-1 system, and subpoena Internet providers like Comcast and Verizon for the brick-and-mortar location of those IP addresses.

Investigators then surveil the property, perform background checks on all members of the household, and obtain a search warrant. A tactical unit is usually summoned to serve the warrant, and then investigators will “do a triage at the location of the house,” DiNunzio said.

“First we look for [the files] we’ve pulled off of our [software intercept]programs,” he said. “Nine times out of 10 we’re going to find it there. If not, we’re definitely going to find it at the lab. If we find one [file], there’s always tons of it. [Suspects] delete it off the main drive [but] keep it on a thumb drive [or]another hard drive.”

Problematic for investigators, however, is that the victims depicted in the pornographic images and videos often lie beyond their jurisdictions, and producers of child pornography “use a lot of sophisticated software and equipment to mask themselves,” Malone said.

“It’s difficult to get to people who are producing in Southeast Asia, Russia, Europe,” he said, “and a lot of them are a lot more careful than someone who takes a picture.”

On at least one occasion, however, the High-Tech Crimes unit was able to trace some information that helped locate and recover a victim, Malone said.

“There isn’t a greater feeling than knowing that a little girl or little boy won’t have to suffer through that type of victimization again,” he said. 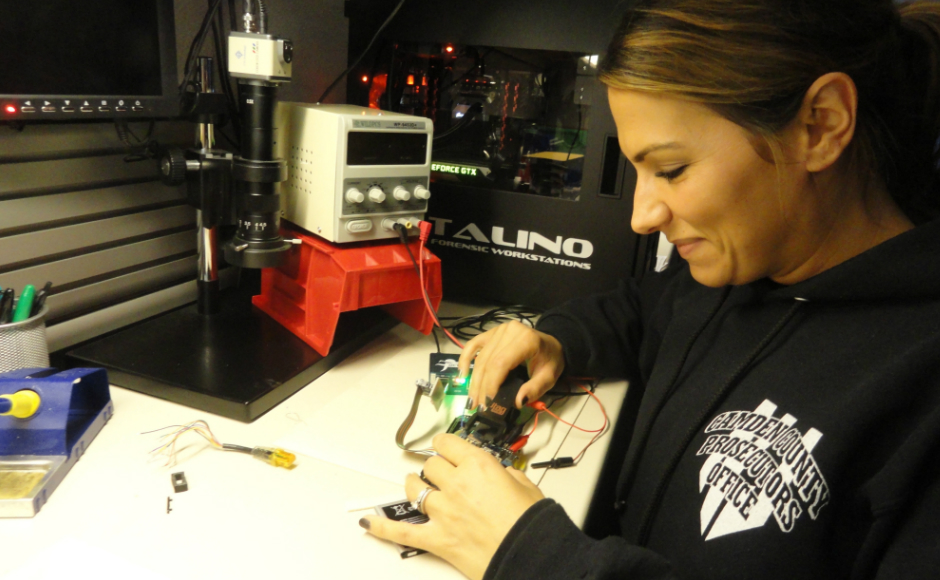 The last of these is one of the specialties of Detective Kate Scully, a trained interior designer who joined the unit as a composite artist, and then applied her skills with Adobe Photoshop and Illustrator to enhancing audio and video footage.

“I pretty much got trained in the office,” she said.

Scully shares in the group workload of combing through hard drives for pornographic images, but she also spends days and weeks performing forensic analysis on mobile devices, which means cracking into cell phones and tablets that she doesn’t have the passwords to access.

Scully has a number of tools at her disposal, including a brute-force login mechanism, which simply tries numeric sequences in various permutations until the device is unlocked. If that approach fails, she’ll get into a device at the circuit board level, using soldering tools and equipment manuals.

Sometimes she has to hook a phone up to a power supply just so that the brute-force sequencer can operate; if a phone isn’t set up to keep taking a charge while that operation takes place, she has to wait hours for it to recharge to resume the process. It can be frustrating, but Scully is patient.

“My best days are when I’m working on a phone for two weeks, three weeks tops, and I just get that connection,” she said. “All that work that I’ve done prior…it’s a relief. The connection starts, and then we get something.”

High-Tech Crimes also oversees locally the work of the Internet Crimes against Children Task Force, which Detective Richard Nicolella said provides electronic surveillance of cases that involve other child endangerment issues, from human trafficking and child exploitation to “sextortion.” The crime is not a new one (“We’ve found [sextortion]statutes in our law that date to the 1930’s,” Nicolella said), but in digital times, it may be more easily facilitated.

Sextortion describes a situation in which an adult coaxes a child into taking or sharing pictures or videos of themselves via a social media site like Facebook, Twitter, or Chatroulette, and then extorts sex from the child under the threat of publicizing those images. Kids in single-parent or divorced households may be more at risk, Nicolella said, especially those who are given web-enabled devices “as a form of socially interacting rather than being a parent.

“If you’re giving an 8-, 9-, 10-year-old a device, it opens up a whole can of worms,” he said. “Those typical missteps in parenting only lead to issues with the parent being questioned: why would they allow their kid to use Snapchat or Chatroulette or even Google hangouts?

“That’s where parenting comes in,” Nicolella said. “There has to be a moral boundary between social interaction with what’s right and what’s wrong. Behaviorally, there’s things that are wrong.”

Nicolella isn’t preaching from a pulpit; he’s a parent, too. In fact, all but one of the detectives in the unit is married with kids.

So how do they get through days that require them to wade through terabytes of files depicting some of the cruelest behavior imaginable—not just witness it, but investigate it—and then put what they’ve seen behind them and return to their families?

“You have a gallows humor,” Malone said. “That’s how you deal with it. It’s all about us supporting each other. We keep in mind that the larger goal is to actually catch and prosecute these individuals. That’s what fuels us.

“We have a great working relationship, and I can’t think of a more fulfilling job than to help put people like this away and save children,” he said.

DiNunzio brings in a psychologist at least monthly, just for his detectives to talk. He said the group is very supportive of one another, and gathers for a drink or two on Fridays. Mostly, they take strength from the support their families offer.

“We have a good home life,” DiNunzio said. “We have good spouses. I fall back on mine all the time.”

Despite the weight of the work his unit is tasked with doing, “it’s a small sacrifice to deal with on my end if we can just get the people who keep this going off the street,” he said.

Scully said compartmentalizing her experiences is critical: although she would love to be a stay-at-home mom, she counts on making a difference at the office.

“I thank God that when I come to work, I come knowing that I’m loving what I’m doing, which makes it a little easier,” she said.

“We’re basically here to keep society free of individuals that look to victimize and exploit children,” Malone said. “That’s the most important goal of our unit. We’re here to try to keep the Internet safe for common people to use it.”