From parades to concerts to celebrations, South Jersey is home to a variety of rich neighborhood traditions on the Fourth of July. Here are the details for this upcoming Independence Day weekend.

Every Fourth of July weekend, the historic communities of Camden County revive a number of familiar traditions, from pool parties to parades to fireworks displays. We’ve tried to compile the most up-to-date, comprehensive list of celebrations in our area, including start times, rain dates, and other information. Here’s what we’ve got. 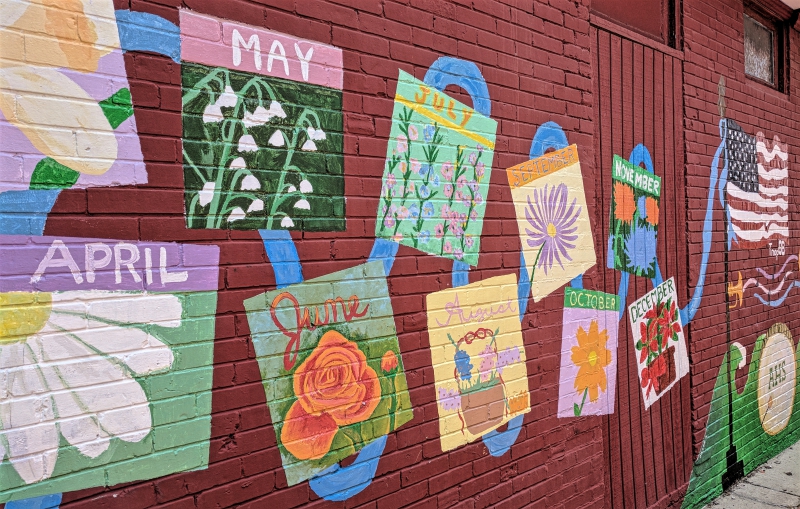 The traditional parade route originates at the intersection of Paris Avenue and Amherst Road; details for marchers are here.

This year’s theme is “The Arts in Audubon,” a tribute to fine and performing arts in the borough. 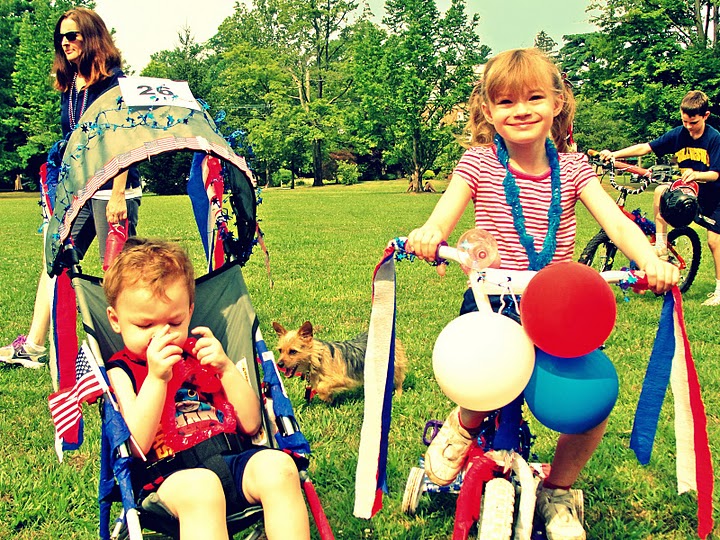 Collingswood kicks off its Independence Day celebrations on Tuesday, July 4, with a 10 a.m. bike parade hosted by Bike Up Collingswood.

Tatem Shields American Legion Post 17 will be handing out free ice cream and flags at the park entrance (Magill and Browning).

At 2 p.m., children can proceed to Roberts Pool, which will be open for water games, activities, and a free swim to keep everyone cool.

Throughout the day, the Proud Neighbors of Collingswood will judge homes and businesses participating in its annual decorating contest. Collingswood Cash, the borough town-wide gift certificate, will be awarded for the most creative, original, and “overall best look” properties, as well as those that show the most “appropriateness to architecture” and the “best historic home.” Contact july4@proudneighborsofcollingswood.org to participate.

Finally, at 6:30 p.m., Collingswood High School opens its gates for its Fourth of July spectacular, punctuated by the band TO THE MAX at 8 p.m. and fireworks at 9:15. In the event of rain, fireworks are postponed to July 5. For the fourth consecutive year, Knight Park will be closed to vehicle traffic. 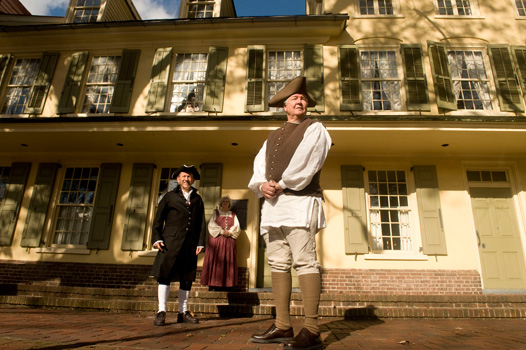 For a twist this year, the annual Haddonfield Fourth of July fireworks will be held on Kings Highway, Monday, July 3, as repairs to the athletic facilities at Haddonfield Memorial High School are underway.

Starting at 6 p.m., a fleet of food trucks will line the main thoroughfare from Chestnut Street to Washington Avenue.

Entertainment by The Shore Thing will begin at 7:30 p.m. The Haddonfield Celebrations Committee is also providing amusements for children at $1 a ticket until the fireworks begin around 9:20 p.m. The fireworks and entertainment are free; donations are encouraged.

The traditional borough Fourth of July parade starts at 10 a.m. Tuesday, July 4, at the corner of King’s Highway and Chestnut Street and ends in front of Haddonfield Memorial High School. Registration is 8:30 to 9:30 a.m. 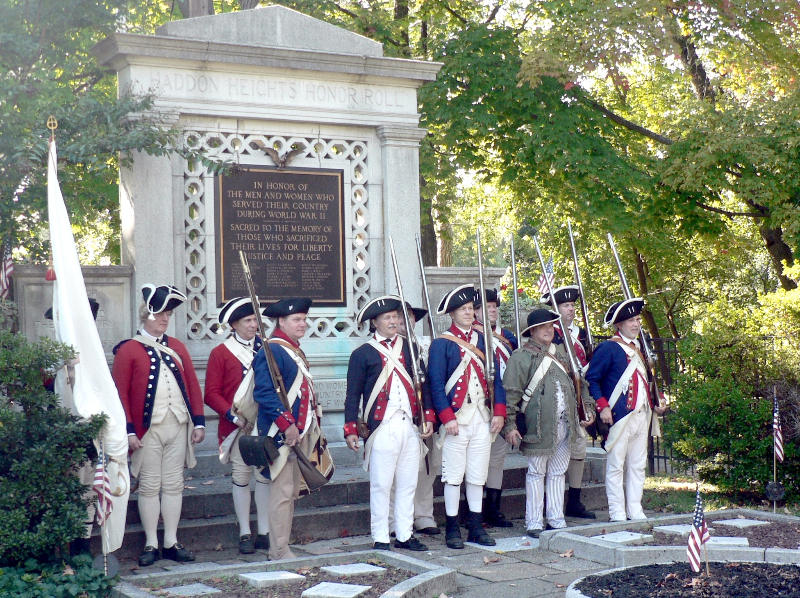 Independence Day in Haddon Heights kicks off at 8 a.m. Tuesday, July 4, with the annual Firecracker 5K.

Then at 9 a.m., the borough parade heads out from Second Avenue, down Station Avenue, and around 10th Avenue to High Street.

A baby parade will run from 8:45 to 9:15 a.m. at Sycamore and Tenth Avenue, joining the full parade after.

A post-parade party in Hoff’s Park runs until 12, with face-painting, inflatables, and refreshments. 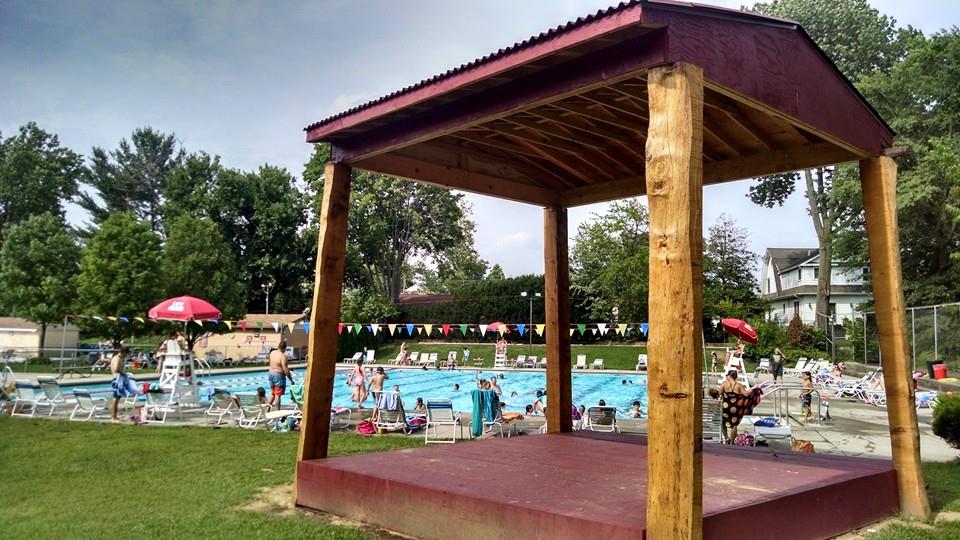 Guests will enjoy live music and inflatable bounce amusements; refreshments will be sold. Fireworks begin at dusk; the rain date is Wednesday, July 5.

At 11:30 a.m. Tuesday, July 4, Haddon Township will hold its annual Fourth of July parade, starting at the municipal building (Haddon and Reeve) and ending at the Crystal Lake Pool. The best bands, floats, fire trucks, pets, and most patriotic bikes all will win prizes.

After the parade, the pool will be open to the public until 6 p.m. for water races, games, crafts, food, and entertainment. The first 750 guests will enjoy free hot dogs and soda. 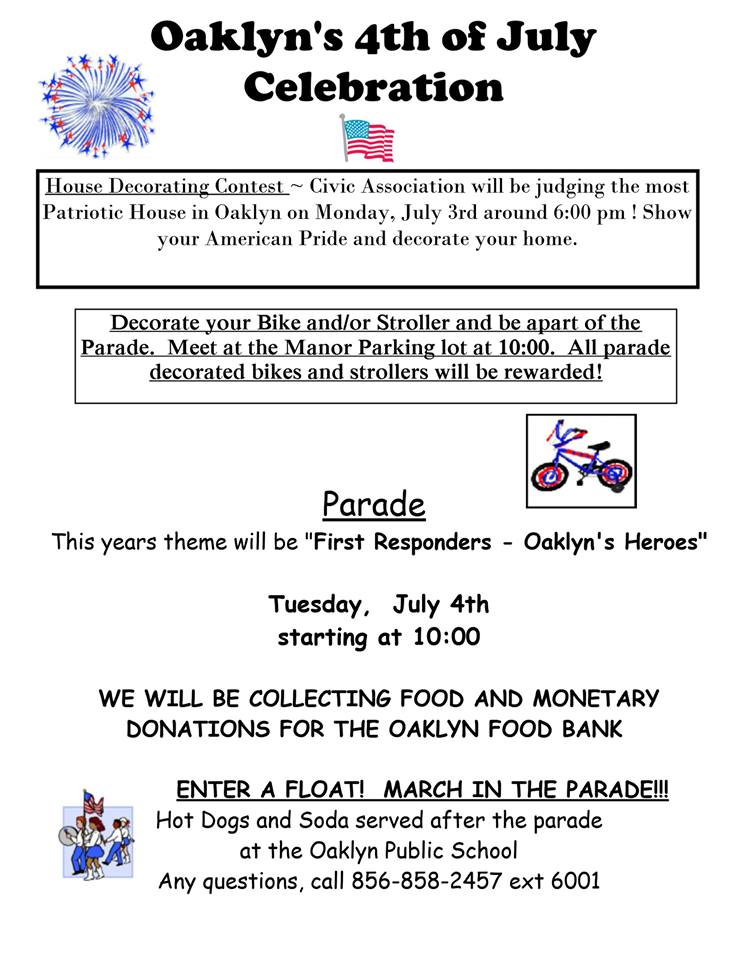 The Oaklyn Civic Association will judge the most patriotic house in the borough at 6 p.m. Monday, July 3.

Oaklyn will celebrate the holiday with a parade at 10 a.m. Tuesday, July 4.

Participants will assemble at 10:00 a.m. in the parking lot of the Oaklyn Manor Bar.

Bikes and strollers decorated in patriotic fashion will be rewarded. The theme of the 2017 parade is “First Responders – Oaklyn’s Heroes.”

Hot dogs and soda will be served at the Oaklyn Public School after the parade. Attendees are invited to bring food and monetary donations for the Oaklyn Food Bank.

Want to march in the parade or enter a float? Registration is due July 1. 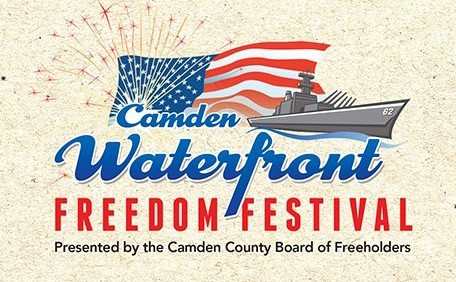 The Fourth of July Freedom Festival is a free concert and fireworks celebration presented by the Camden County Freeholders. 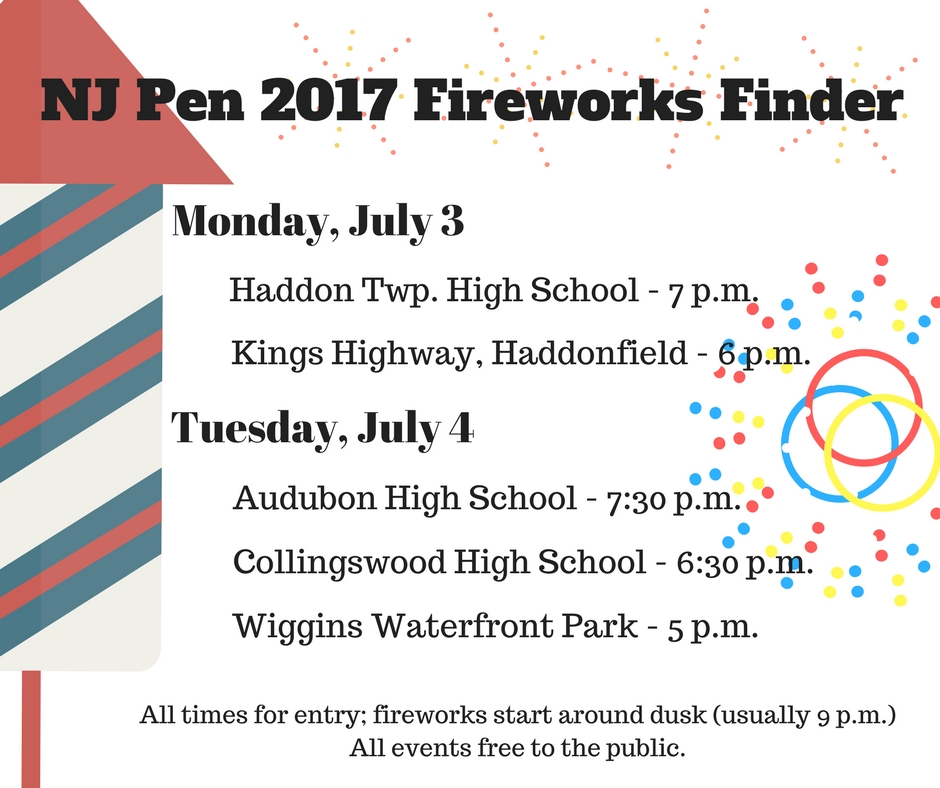