Trending
You are at:Home»Government»Objectors Press Haddonfield Planning Board on Warwick Rd. Subdivision

A number of technical issues with the Warwick Road proposal should be resolved before the body grants its approval, said an engineer for the opposition. 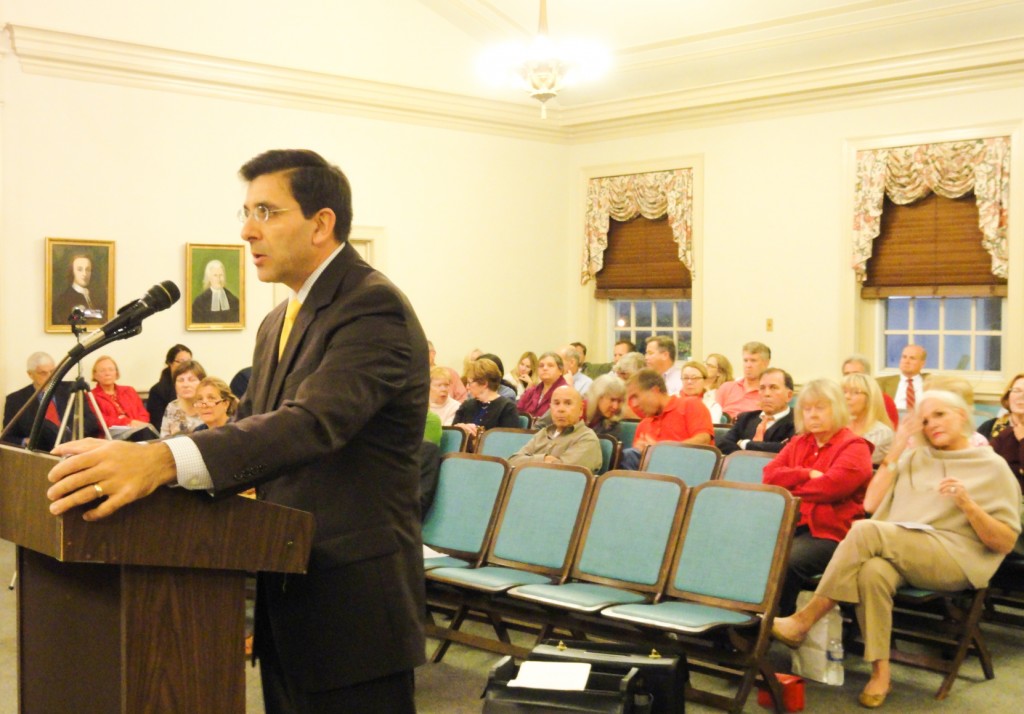 Much of the public outcry around the proposed subdivision of one of the largest residential properties in Haddonfield has focused on the character of the neighborhood.

Opponents of builder Mark DeFeo’s plans for 605 Warwick road say that tearing down the well-situated stone Colonial on one of the borough’s major thruways might also send an unwanted invitation to other builders to follow suit.

On Tuesday’s meeting of the borough planning board, however, the assembled crowd was treated to a far more technical discussion: of underground utility placement, side-street garages, stormwater management, and lot depth measurements.

Appearing as an expert witness for a group of 19 Haddonfield residents opposing the plan for 605 Warwick, civil engineer Robert Hunter walked the board through a catalog of statutory objections. 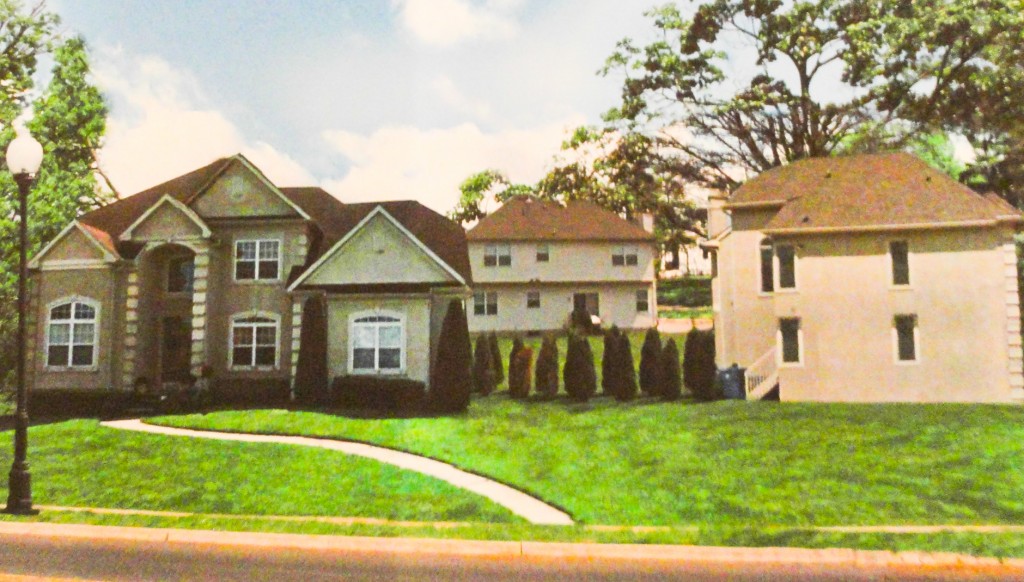 The objections he raised aren’t enough to torpedo the entire works, he said, but they are reasonable enough that the board should either consider them as grounds for variance or require modifications of the builder.

For starters, Hunter said, the proposed lot that would run along Treaty Elms Lane does not meet existing ordinance requirements for lot depth.

“It is not shown on the plans because the assertion is that there is not a lot depth required based on a corner lot,” he said; “however, there is nothing in the ordinance that relieves an applicant from the requirement for lot depth.”

Secondly, without some changes to the plans, Hunter said, neighbors at adjoining properties, which already battle drainage issues after a rainfall, would have bigger problems on their hands with the discharging of stormwater from the three new homes.

“Preexisting conditions [in the proposal]are claiming to be better than what is at the site in regards to retention of water,” Hunter said, especially considering that the plan calls for the removal of existing “trees and woods” on the property.

“That would allow for more stormwater runoff that would hit the storm systems; the streets,” said Planning Board Chairperson John LaProcido.

Additionally, Hunter said, the initial landscaping proposal at the site offers “little to no plantings…other than compensatory trees,” a contention that DeFeo’s attorney, Donald Cofsky, said would be remedied in a separate landscaping proposal submitted to the Haddonfield Shade Tree Commission September 19.

“What negative impacts would you foresee as a result of the lack of landscaping?” asked planning board member John Stokes.

“The board has the ability to require [buffers],” Hunter said. “Buffers are generally planted with evergreens to provide year-round screening. Trees have not been outlined in the plan, so that’s something that can be considered. Plus, buffers can be deed-restricted.”

Parking plans at the property are also within the scope of the board to regulate, Hunter said.

“The applicant hasn’t shown a plan to provide adequate parking through the subdivision,” he said.

“A four-bedroom home requires 2.5 parking spaces,” Hunter said. “On a lot-by-lot basis, you would round down to two. There should be seven total required spaces; it’s a collective number based on the number of lots created.”

Hunter also contended that due to the “character of the neighborhood, there are no overhead power wires,” and that utility services at the proposed properties should be provided underground.

“[The] applicant testified that they’re at the mercy of the utility company” to do this, Hunter said. “It’s cost-based, but they will provide it in the new homes.

“I believe that this application does ultimately require several variances for approval,” Hunter concluded. 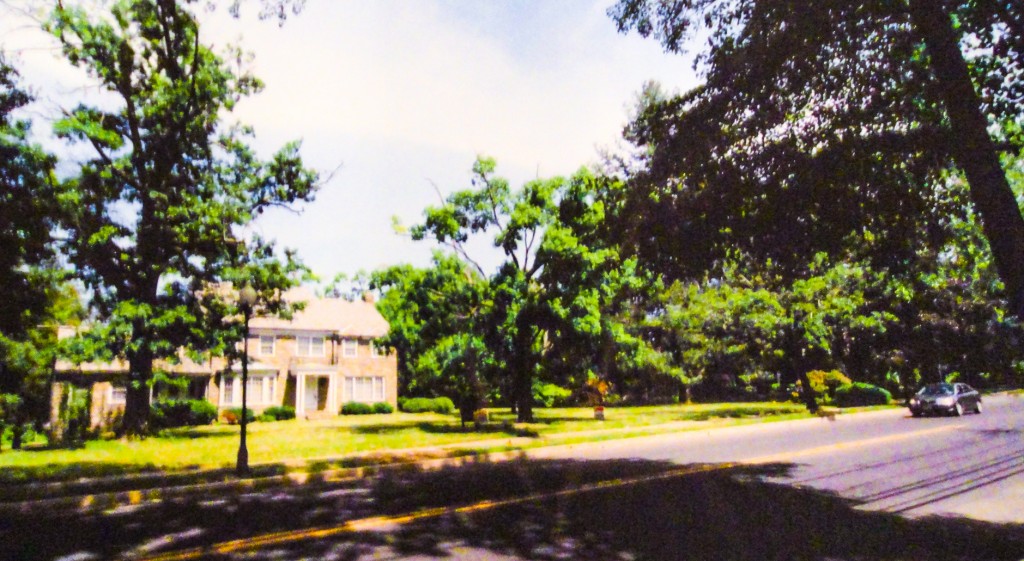 The property at 605 Warwick Road as it appears today. Credit: Matt Skoufalos.

Dr. John Petrozzi, a dermatologist who lives near the property on Gill Rd., asked Hunter whether “If only two structures were put on the property, would most of the variances then not be required?”

Linden Avenue resident Jennifer O’Neill asked Hunter whether he typically requests variances “up front” for clients planning subdivisions, to which he responded “Yes, that’s a requirement of land use law.”

Later in the evening, Herbert Konrad of Warwick Road opined that “one of the board’s duties is to maintain the character of the neighborhood.

“I don’t think the plan does that,” Konrad said. “If it does get approved, I hope that the large trees that are on our property line are maintained for picking up as much water as possible and for the privacy issue.” 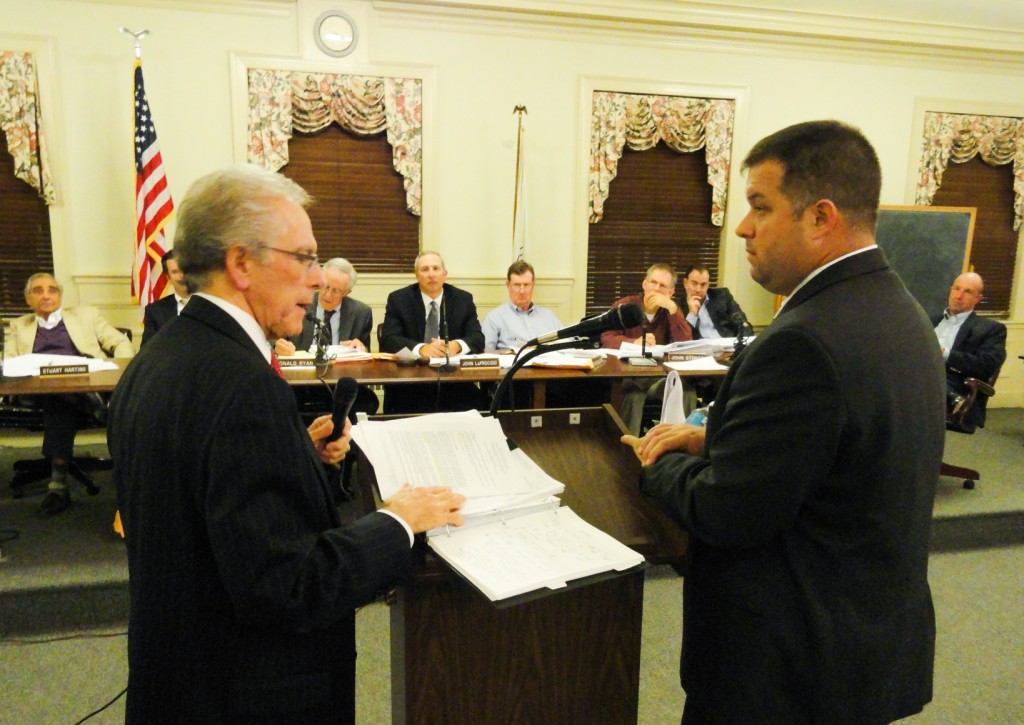 During a brief recess in the four-hour meeting, Cofsky told NJ Pen that the duty of the planning board is to enforce zoning by ordinance, not “zoning by mob.

Cofsky also disagreed that subdividing the Warwick Road property was symptomatic of greater concerns from Haddonfield residents about losing the unique charm of their community, despite a number of public comments to that effect.

“What people are really concerned about primarily is not something like this,” he said. “They’re concerned with houses that have been knocked down on small lots in areas where there have been small houses around, and then on a small lot they put in a very big house.

“We’re not doing what has had people so upset recently, such as some construction over on Maple Avenue where they have a small house, and they shoehorn in variances, and they end up with these houses that look out of scale.

“Here because of the size of the lot, the big restriction on pervious and percent lot coverage, everything will be fine in size and scale,” Cofsky said.

Similar issues likely in the future

Salvatore Siciliano, attorney for the objectors to the subdivision, expressed his doubts that DeFeo’s plan would be viable as a three-home proposal.

“Originally he wanted four homes,” Siciliano said. “If there were two homes to be proposed, two half-acre lots, you’re going to have some concerns, but they’re going to be a lot fewer concerns.”

Under the letter of the law, Siciliano said the planning board is limited in its objections to conforming with the existing ordinances. To safeguard the community against further subdivisions, he said, borough commissioners must take the reins.

“It’s the board of commissioners and that has to change the ordinances,” he said. “One of the basic principles of the founding of New Jersey is that it’s home rule. The significance is we decide.”

Siciliano (who, like Cofsky, is also a Haddonfield resident) said that the decision of the planning board in this case could have “a domino effect” for other applications, adding that the homeowners he represents share those concerns.

But he also believes the specifics of the case are relevant to neighboring communities.

“This could be Warwick Road in Barrington, in Somerdale,” Siciliano said. “That’s why it matters to the folks in Cherry Hill, Voorhees. The likelihood that they’ll have a similar issue in the future is high.

“The focus for this board and this application is the complete lack of information” about the Warwick Road plans, and the fact that there’s so much information that’s not been presented that’s going to affect what’s going to be built there. 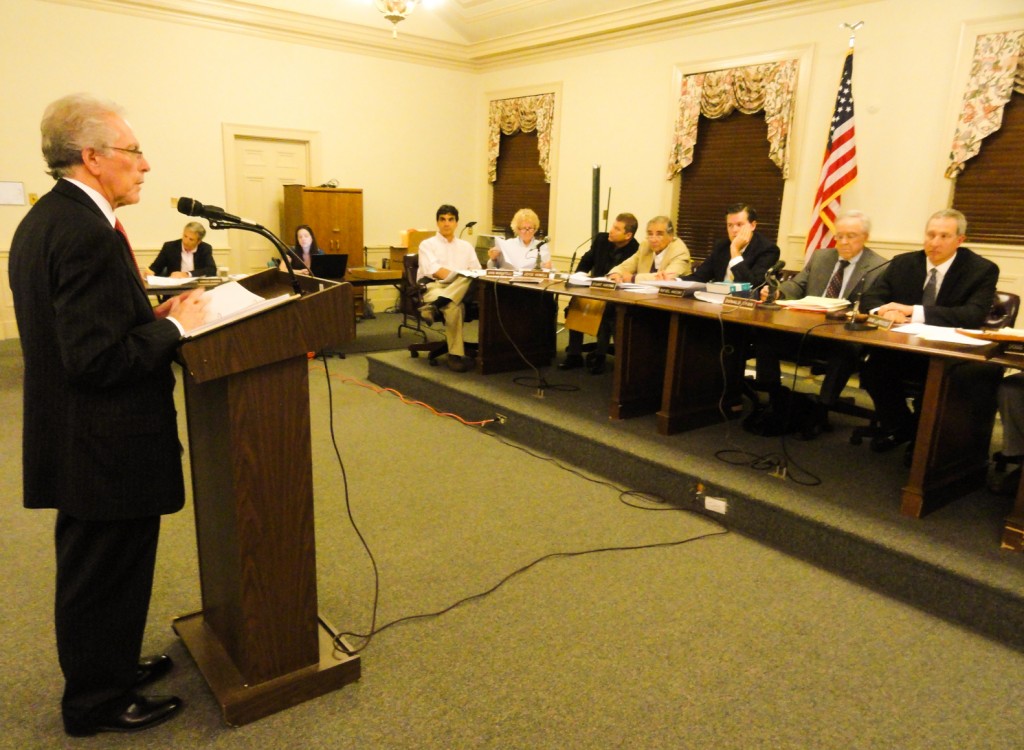 Cofsky addresses the Haddonfield planning board on the subject of the Warwick Road redevelopment. Credit: Matt Skoufalos.

‘Making this more difficult in the future’

From the constraints of the existing statutes to the likelihood of strengthening them, Commissioner John Moscatelli said that the issues at work in the case are well-known to borough commissioners, and promised that Haddonfield’s governing bodies are “going to look at what we can look at to make this more difficult in the future.

“[The builders are] operating within their legal rights,” Moscatelli said. “Municipal land use law governs, [and it’s]pretty protective of individuals’ rights on their property.”

Moscatelli said that the home, which was “on the market for a while” and at a million-dollar price point, was subjected somewhat to the current pressures of the real estate market.

“To my understanding, the high end isn’t selling as well,” he said; “the lower end has heated considerably.”

When asked whether the only recourse for residents in this situation is public pressure on the builders, Moscatelli said it “certainly can’t hurt for the public to have their opposition known.”

Meanwhile, the issues around the subdivision question don’t seem to be retreating. At the start of Tuesday’s meeting, LaProcido announced that the body will form a subcommittee “to look at planning issues in town.

“Based on the content of the topics, we will have exposure to the public based on what the subjects are,” LaProcido said. “We’ll be making recommendations to the commissioners based on those requests.”

Reached for comment after the meeting, Haddonfield Mayor Jeffrey Kasko said that the borough commissioners are assembling a task force comprising zoning and planning board volunteers as well as interested residents “to take another look at that issue and make some recommendations.

“We’re in a town that’s pretty much built-out; fully developed,” Kasko said. “Land is very, very valuable; taxes are high. People are looking to subdivide or make improvements because it’s in their financial best interests.”

Kasko said that although he personally doesn’t appreciate “the teardowns of older, smaller houses,” local government should be reticent about restricting the rights of property owners too severely.

“We want some limits, but we can’t ban teardowns,” he said. “If you’re in the historic district you’ve got a whole other layer in addition to this. We made zoning changes less than 10 years ago, and they were made to balance out the rights of property owners to do what they want with the look [of their homes].

“If they’re following the setback, you have a right to do, within certain limitations, what you want to do with your property,” Kasko said. “I don’t know how much government control you want over that.”

For now, in lieu of greater direction from any such task force, the Haddonfield planning board seems to be comfortable slowing down the process as much as possible. LaProcido informed those assembled Tuesday that the next subdivision application, for 645 Washington Avenue, would not be heard at the meeting, as the builder’s application is “incomplete.”

Landscaping issues related to the Warwick Road property will be deferred to a special meeting in November, since the shade tree commission hadn’t had an opportunity to review DeFeo’s landscaping plans.

Cofsky, who said that his client wanted to have “a perfect record” meeting the concerns of the board, didn’t object.