New Jersey Laborers Local 172 assembled outside of NJ Senator Jim Beach’s Route 70 office Wednesday, lobbying for a fix to the state Transportation Trust Fund so they can return to work. 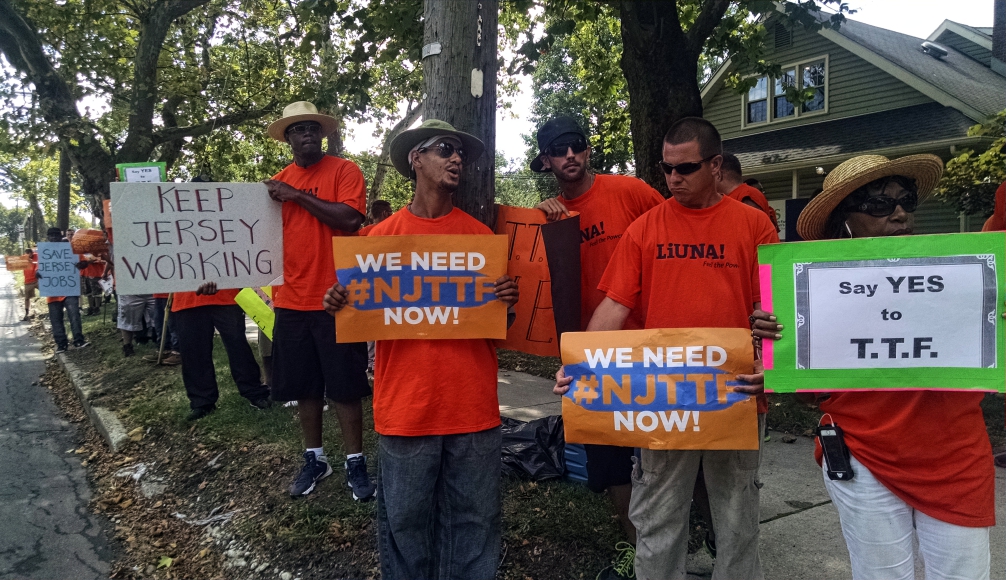 Josephine Thompson of Camden, a 14-year veteran of the building trades, has been out of work for 43 days.

On an ordinary August morning, Thompson would be out in the triple-digit heat, flagging traffic, opening and closing lanes, repairing bridges and roadways, or doing landscaping.

Summer is the busy season for workers in her union, Construction and General Laborers’ Local 172, but since legislators failed to re-authorize funding for the state Transportation Trust Fund (TTF), the infrastructure projects on which they’d ordinarily be working have all been halted.

On Wednesday, Thompson and several members of Local 172 gathered outside the Cherry Hill offices of New Jersey Senator Jim Beach (D, NJ-06) to send the legislator and his cohorts a public message: get a deal done, and put people back to work.

“If we don’t have a paycheck, there’s bills we can’t pay,” Thompson said, acknowledging she wouldn’t even be able to watch any television broadcasts of her protest.

Robin Taylor, also of Camden, said the work stoppage has hampered her ability to make her mortgage payments and to provide support for her son, a college junior.

“It’s very depressing,” she said. “I have thoughts of not knowing how my next bill is going to get paid. I constantly call the union. I’m babysitting. I have to find some type of ways to get my bills paid.”

According to the American Road & Transportation Builders Association (ARTBA), the shutdown is costing New Jersey 4,200 jobs, $41 million in stoppage costs, and $9 million weekly in lost sales and wages. Locally, the biggest projects halted because of a lack of funding include the repaving of Route 70 in Cherry Hill and Transit Village roadway improvements in Camden.

In all, 53 municipal projects already underway in the immediate area have been halted, as have seven county-wide capital projects, one rail project, and two environmental site remediation contracts. Another handful of major concept development projects have also been affected by the stoppage, contributing to the woes that earned the state a D+ infrastructure grade from the American Society of Civil Engineers. 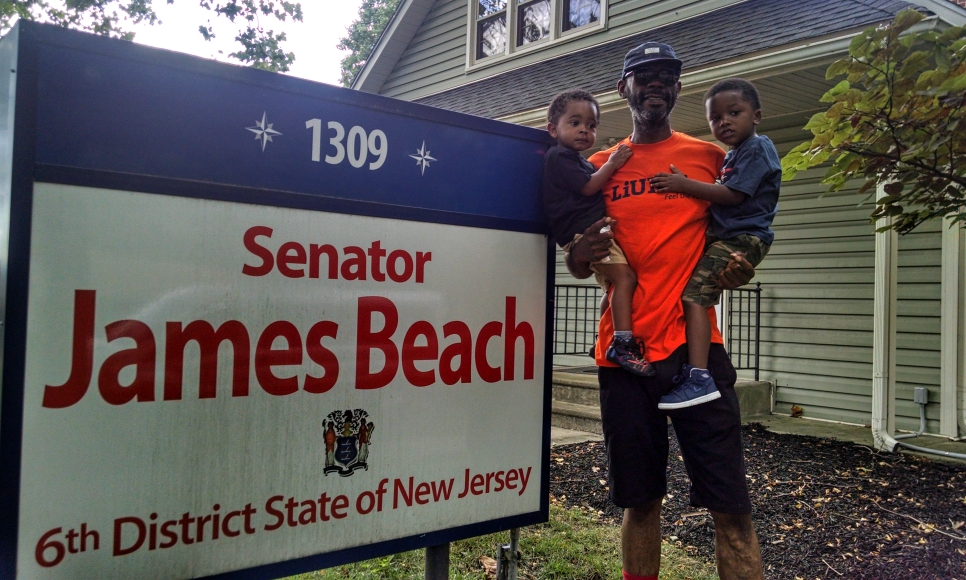 Jermain Sumlin of Local 172 and his sons, Asa and Aden. Credit: Matt Skoufalos.

Jermaine Sumlin of Willingboro is a father of three who’s been working heavy highway labor for seven years.

Even when construction projects are funded and work is available, at least 10 percent of his union membership is job-insecure, depending on catching on with several different employers in any given year, Sumlin said.

In the six weeks he’s been out of work, Sumlin estimates he’s lost $6,000 to $7,000 in wages, and he’s only got one more unemployment check until that benefit is renewable in January. Those whose unemployment has expired are “screwed,” he said.

“We have to go to the extreme; try to get a loan, some type of side hustle,” Sumlin said. “It’s a definite hardship. Daycare don’t stop.”

When Wayne Goodman’s employment ran out on Sunday, he was forced into early retirement so that he could access his pension to make ends meet. The Jackson resident said that in 31 years, the TTF stoppage is the most troubling labor concern he’s encountered.

“There’s been layoffs but no stoppages,” he said. “This is the worst.” 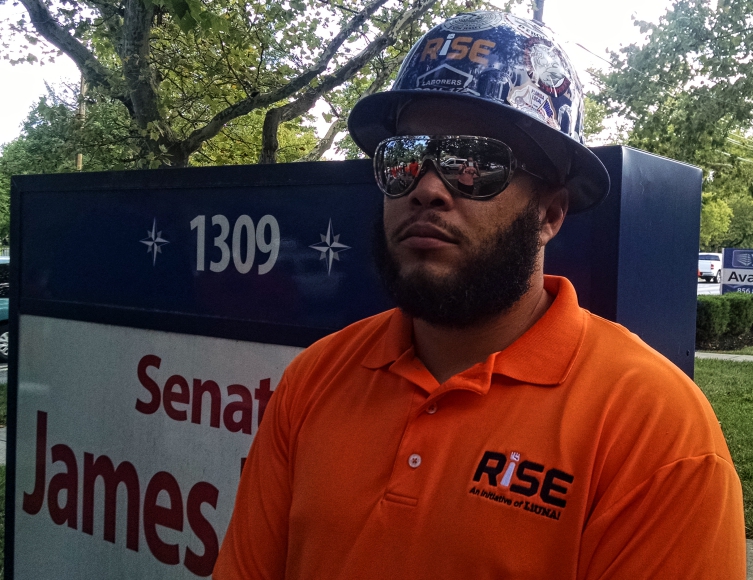 Randy Brolo of Lumberton said the TTF stoppage has depleted his savings and put him at risk of losing his health benefits, which are self-funded and depend upon his accruing enough hours to qualify for them.

One of the fixes that elected officials had negotiated was a planned 23¢-per-gallon increase in the gasoline tax, which Brolo said he would gladly pay if it meant he could drive his Ford F-250 to a job site.

That sentiment seemed to be shared by passing truckers, many of whom honked in support of the protesters as they sped by on Route 70.

“If you drive up and down this road, you’ll see how the TTF needs to be funded,” Brolo said. “You hear the honking from commercial truck drivers. They pay fuel for a living. They know what we’re about.”

Even if New Jersey legislators reauthorize TTF funding, but the call is made too late in the season, Sumlin said roadway projects could otherwise deteriorate in unfavorable outdoor conditions.

“Thirty-degree weather doesn’t do well with concrete or asphalt,” he said. “If they sign a bill too late, we still don’t have time to finish.”

Beach was not in the office, but his Chief of Staff, Ivy Rovner, said the senator voted in favor of the TTF bill in committee and in the budget hearing. Rovner said the office was “a logical place [for protesters]to position themselves. 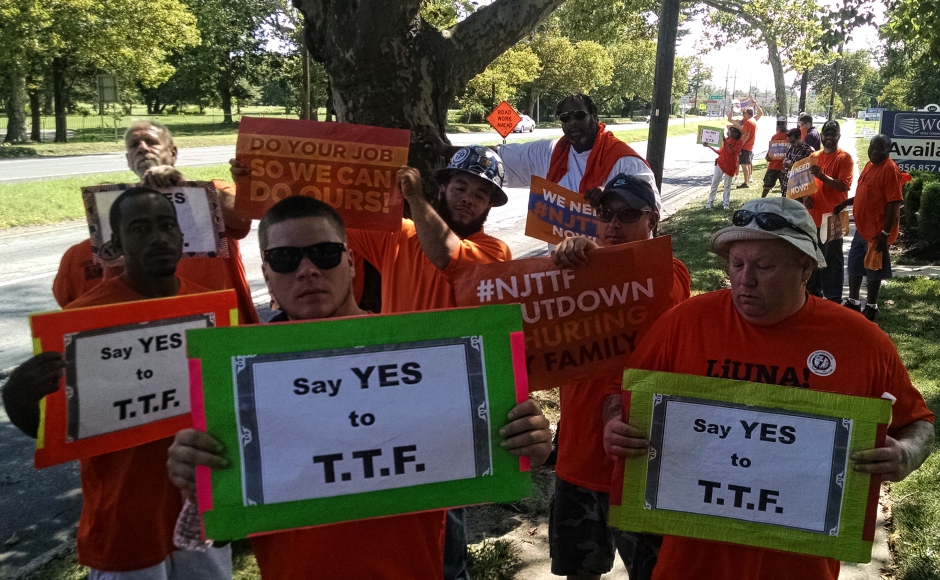 Among the work halted locally by the failure to re-authorize TTF monies: