Authorities say the arrests are the result of a two-month investigation into a narcotics manufacturing operation. 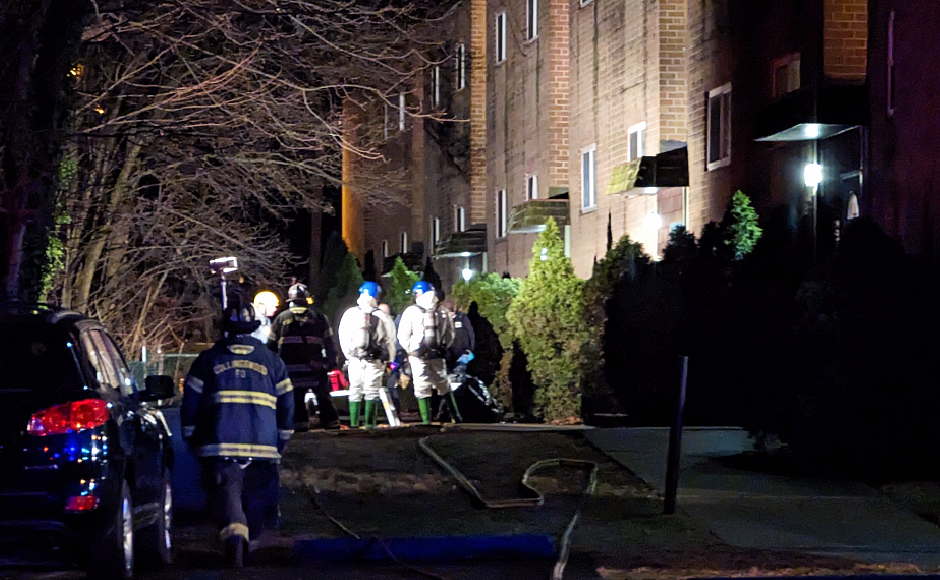 According to the Camden County Prosecutor’s Office (CCPO), the two-month investigation concluded in a bust at the Creswood Apartments in Collingswood, and another at a Sicklerville address.

Police seized five ounces and 1,000 individually packaged bags of fentanyl, $40,000 in cash, a handgun, and four vehicles in the activity.

Three Camden City men and two Sicklerville men were all arrested on first-degree charges of maintaining a manufacturing facility for controlled, dangerous substances (CDS), and third-degree possession of CDS.

Ali Coles, 49, of Sicklerville, allegedly was packaging cocaine and fentanyl in the Collingswood apartment for distribution, and “was actively attempting to destroy evidence at the time when he was encountered by police,” the CCPO reported.

Coles was remanded to the Camden County jail along with 45-year-old Teronne Perry of Sicklerville, and Camden City residents Adam Brackenridge, 33; Stephon Thomas, 35; and Donnell Horne, 40.

On Friday afternoon, the Collingswood Fire Department reported that it was dispatched to the Creswood Court Apartments “to support a law enforcement operation” at which it assisted in treating patients. The statement deferred all other questions to the CCPO.

The 11 officers treated at the scene by Virtua and Collingswood paramedics were transported to Cooper University Hospital in Camden City, and were later released. 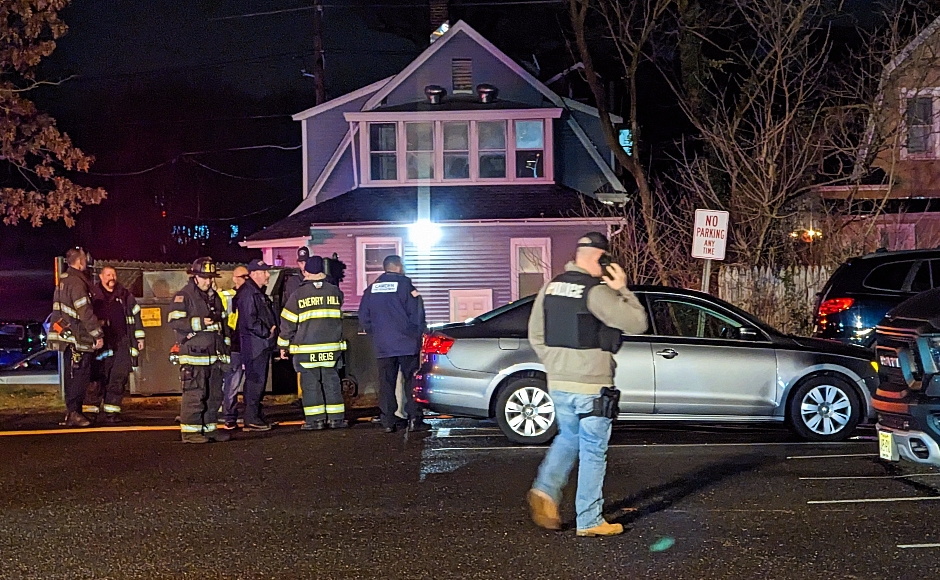 Eyewitnesses at the scene described seeing officers transported to the hospital and suspects being arrested, and were troubled by the presence of HAZMAT teams near their homes.

Reggie Johnson, a four-year Creswood resident, said that his evening was disrupted around 7 p.m. by a commotion on the floor above his.

Returning from work, Johnson had just put dinner in the oven, when he heard what he described sounded like a door being broken down.

His family evacuated the apartment, and wasn’t allowed to return inside for several hours.

While he was outside, the activity continued: Johnson said he saw some four to six officers being evacuated.

He claimed that officers told him those being transported from the scene had been exposed to fentanyl, and that the apartment in question contained “a lot of drugs.”

By 8 p.m., first responders donning respirators and clean suits were being guided to an area of the apartment complex near Harrison Avenue.

Whatever the cause of the event, Johnson said he was disturbed by the thought of narcotics in the building, particularly because he had regarded Creswood as a quiet and out-of-the-way place, where his children are safe to play.

“This came from out of nowhere,” he said, “and that’s a scary thing, too.”

Creswood resident Angel Camlin said she and her boyfriend were carrying groceries to their apartment around 7:30 p.m. Thursday when a police officer ordered them to stop.

For about half an hour, Camlin said they waited by the mailboxes at the apartment, and watched as police began blocking off the roadways leading into the complex.

“There were just tons and tons of cops everywhere,” she said. “They just kept telling us to stay back, and no one would tell us what was going on.” 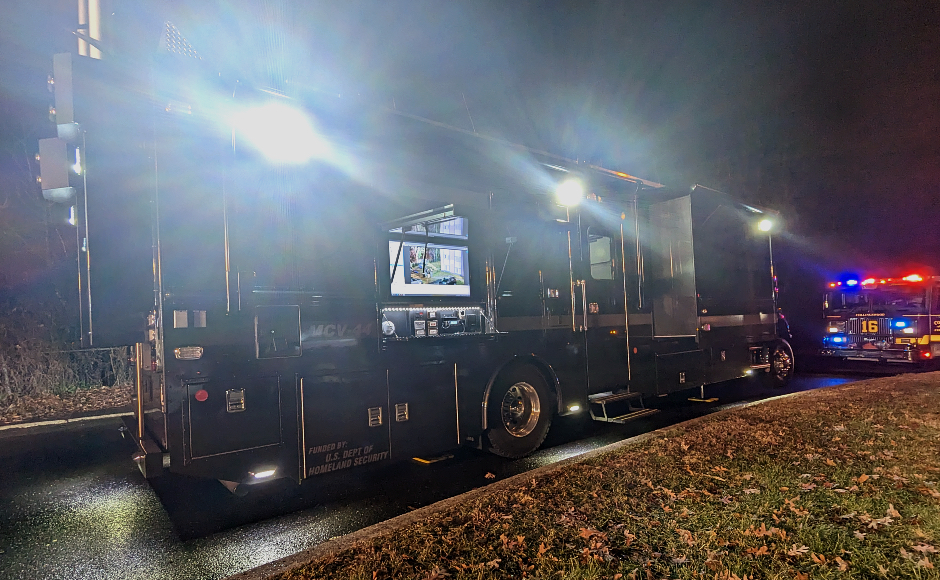 Camlin said she saw police surround the building and a fenced-in outdoor area behind it.

She heard a loud bang, and later saw what she believed to be a man taken away, surrounded by police.

When the HAZMAT crew arrived, Camlin said she asked whether she should evacuate, and was told no.

Eventually, the couple was allowed to return to their apartment, two buildings down from the raided unit. Camlin said authorities remained on scene until after 11 p.m. Thursday.

After chatting with her neighbors, Camlin said the mood at Creswood shifted from tension to outrage.

“Our curiosity quickly turned to being mad as hell,” she said. “I’m mad, scared, and in shock. How did we all not know that was going on?”

Camlin said she’s particularly upset because the complex required significant background checks and income history before she could move in, and rents have spiraled in the two years she’s lived there.

“They charge us per pet now, every month, plus a fee to park,” she said.

“If I’m paying high rent, I expect to be safe.” 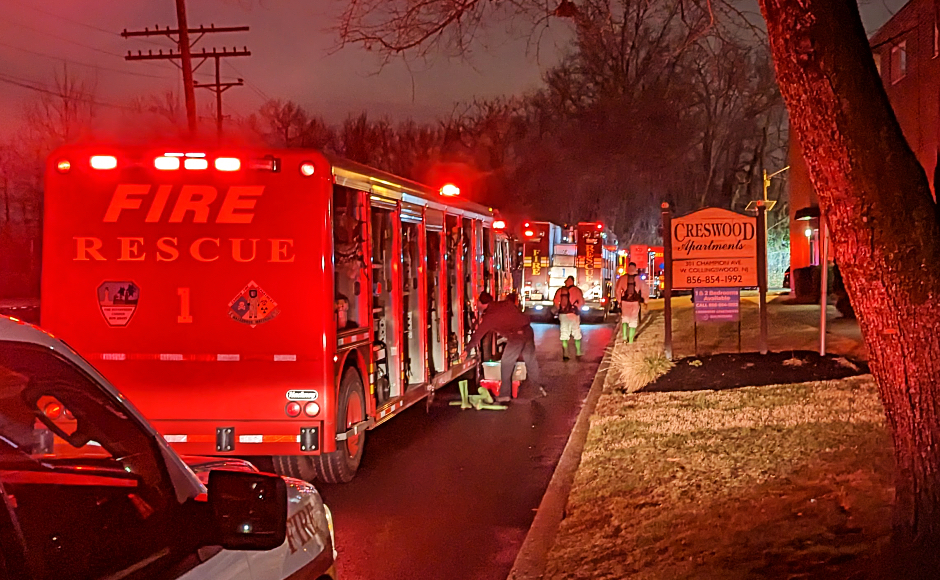 Fentanyl is a strong synthetic opioid used in pain management, and frequently abused like other opioids.

Exposure can be managed with the overdose reversal drug, NARCAN, which can restore normal breathing function.

According to the U.S. Drug Enforcement Agency (DEA) safety recommendations for first responders, inhaling fentanyl can be most harmful, but people are much more likely to have skin contact with the drug — which by itself is not necessarily enough to cause an overdose — than breathing it in.

For years, law enforcement have been told that fentanyl is so toxic as to be able to cause an overdose from simply coming into contact with skin; that information has been challenged more recently.

A 2021 report in the publication Health and Justice noted that “…the risk of fentanyl overdose via incidental transdermal exposure is very low, and it would take 200 min of breathing fentanyl at the highest airborne concentrations to yield a therapeutic dose, but not a potentially fatal one.”

“Indeed, many of the reported fentanyl exposure incidents among police share the symptoms of a panic attack rather than an opioid overdose, and no incidents to our knowledge have been confirmed as overdoses by exposure,” the study reported, citing 2020 research on perceptions of the dangers of fentanyl exposure.