In its ninth year, Jamie Blanchard’s small-batch coffee roastery has grown to support a storefront in the township where the business first found its footing. 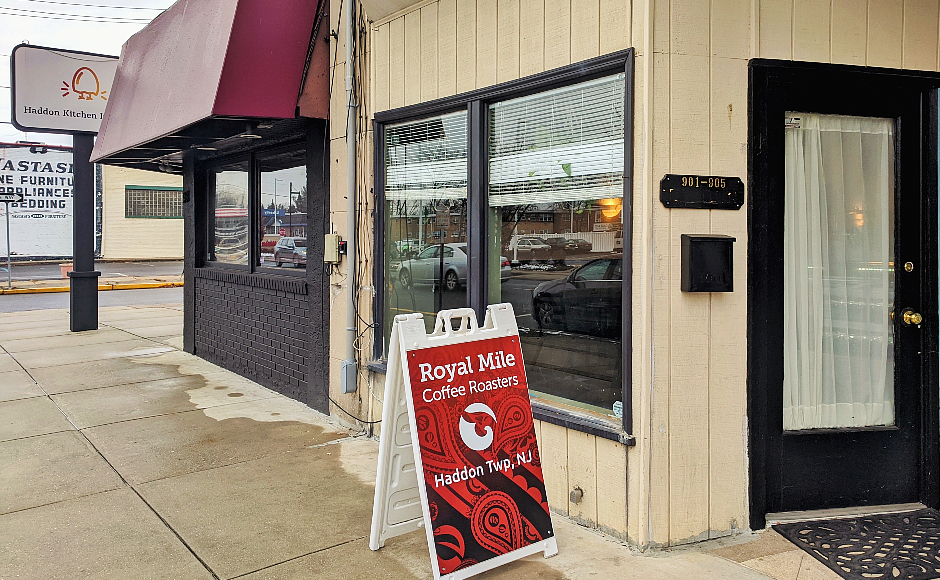 Less than three years after outgrowing its loft space at the SoHa Arts Building in Haddon Township, Royal Mile Coffee Roasters is moving into its own, street-level storefront just a block away.

When owner Jamie Blanchard learned that his customers at Dulce Collingswood were opening Haddon Kitchen Incubator in the former Silver Spoon location on the White Horse Pike, he walked through the space with them, and fell in love with the former banquet room.

Drawn in by its checkerboard-tile floor and tin ceilings, Blanchard knew the space had the right bones for a coffee shop.

Toss in a bar, some shelving, and barista Matthew Ehrke slinging lattes, and the first Royal Mile Coffee Roasters café was ready to go. Blanchard hung a few plants for atmosphere, and quietly opened its doors in the final days of 2021.

It was a muted kick-off; one disproportionate to the years of toil it took to build a small-batch coffee roastery capable of sustaining its own storefront. But for Blanchard, the real achievement was the opportunity to close a production circle the origins of which are rooted in small, family farms in Central America.

“To get to this point took an enormous amount of time and effort,” he said. “It was something that was always going to happen; we just needed the right place and right time.”

Named for the main thoroughfare in Edinburgh, Scotland (Blanchard is an avowed Britpop fan) Royal Mile was begun in 2013 with a tabletop roaster in his backyard shed. 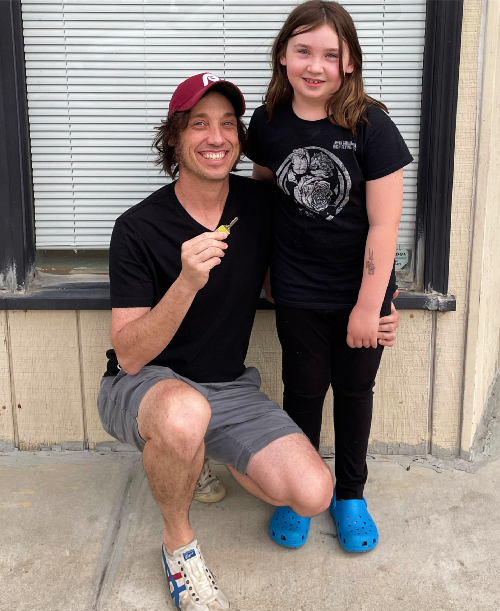 Jamie Blanchard and his daughter, Vivian, getting the keys to the Royal Mile coffee shop in Haddon Township. Credit: Jamie Blanchard.

While Blanchard began to explore the nuances of small-batch coffee, he visited specialty roaster Joe Coffee in New York to learn more about the production process.

There, he was welcomed by other entrepreneurs who shared his passion, and who helped him find his footing in the business.

“I’m just here by the grace of a lot of really good people that have cared a lot,” Blanchard said.

“I’m very lucky that they’ve been as kind as they have been to me,” he said. “They didn’t have to do it.

“I’ve always tried to pass that knowledge on, because I’ve been very fortunate that a lot of people have cared as much about me.”

Not only did the team at Joe Coffee help Blanchard develop a greater understanding of the roasting business, but it was there that he also befriended Steve Mierisch of Fincas Mierisch, a family of Nicaraguan boutique coffee-growers whose beans comprise the bulk of his offerings.

“The Mierisches are an A-plus entity in Nicaragua,” Blanchard said. “These are salt-of-the-earth, welcoming people; the family I wish I always had. That’s why I love working with them.”

Fincas Mierisch operates 12 farms across Nicaragua and Honduras, tracking each batch of coffee beans it grows, right down to the hillside and date of harvest. The family has been a linchpin of specialty coffee production for generations, the third, fourth, and fifth of which operate the business today. Roasteries like Royal Mile are the final link in the chain that connects its crops with the people who consume them.

“It’s really humbling, at the end of the day, just to know my role in it all is so small,” Blanchard said. “But it’s really important because I’m making the chain possible.”

Photos of Fincas Mierisch line the walls at the café, just as bags of their beans fill the Cherry Hill warehouse where Blanchard roasts them. Royal Mile has been built without partners or investors; just a small bank loan and Blanchard’s credit card, with which he scaled up production sufficient to supply 15 Whole Foods locations.

Royal Mile truly grew to the tipping point of powering its own coffee shop, however, during the novel coronavirus (COVID-19) pandemic.

“In 2016, when it became really apparent that there was an enormous amount of opportunity with Whole Foods, we ran like wildfire through [their locations],” Blanchard said.

“We needed to continue to expand with Whole Foods, and the main problem was visibility. 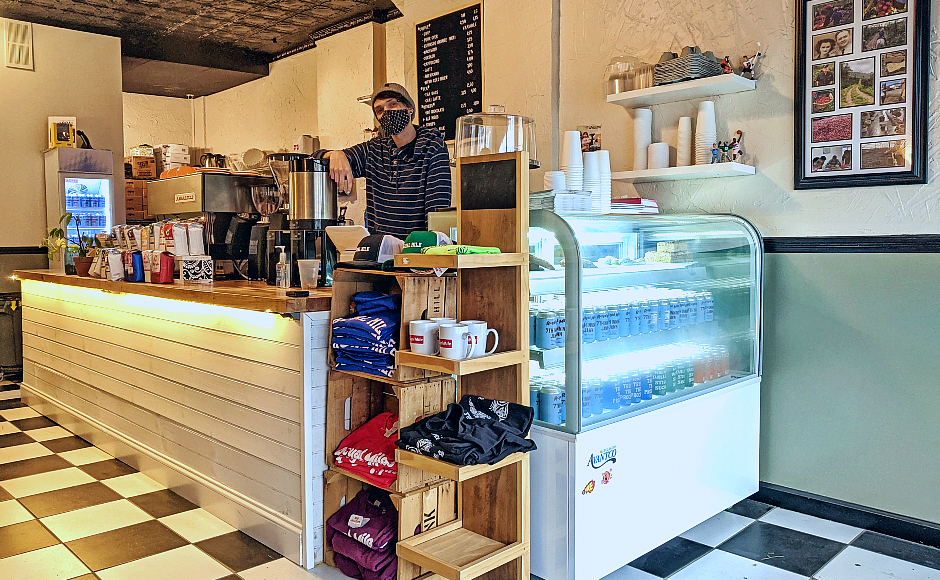 “During COVID, everybody went out and bought coffee because they were working from home more,” he said.

“If there was anything that gave every roaster visibility, it was that.”

Royal Mile had always done a robust mail-order business, but during the pandemic, demand spiked, as customers did anything to avoid shopping in person.

More began to ask whether they could pick up their orders at the Royal Mile warehouse because they didn’t want to deal with the grocery store.

That spike in order volume didn’t recede until the summer of 2021, and on the strength of that growth, Blanchard hired an employee, Jay Miller, to help with roasting and production. The extra help allowed him to devote time to developing a line of canned cold brew coffees, sales of which supported hiring Ehrke to run the Haddon Township cafe.

“I needed people that I could count on and build around,” Blanchard said. “Matt and Jay know that I want them here for a long time, and I want to build around them.”

Part of what helped the cold brew find its audience was a marketing strategy built around Philadelphia sports fandom. Each of Blanchard’s cold-brew blends—Seventh-Inning Jawn, Gritty Jawn, Trust the Process, and Dallas Still Sucks—boasts a font and color scheme designed to caffeinate rivalries among shoppers who might not necessarily be coffee drinkers.

With Philadelphia-area Whole Foods shops picking up the product, Blanchard is leaning on different varietals for other markets. “Dallas Still Sucks” branding plays just as well in a crimson-and-gold variant in Washington, D.C., or in Giants blue and red for shoppers in Weehawken and Montclair. 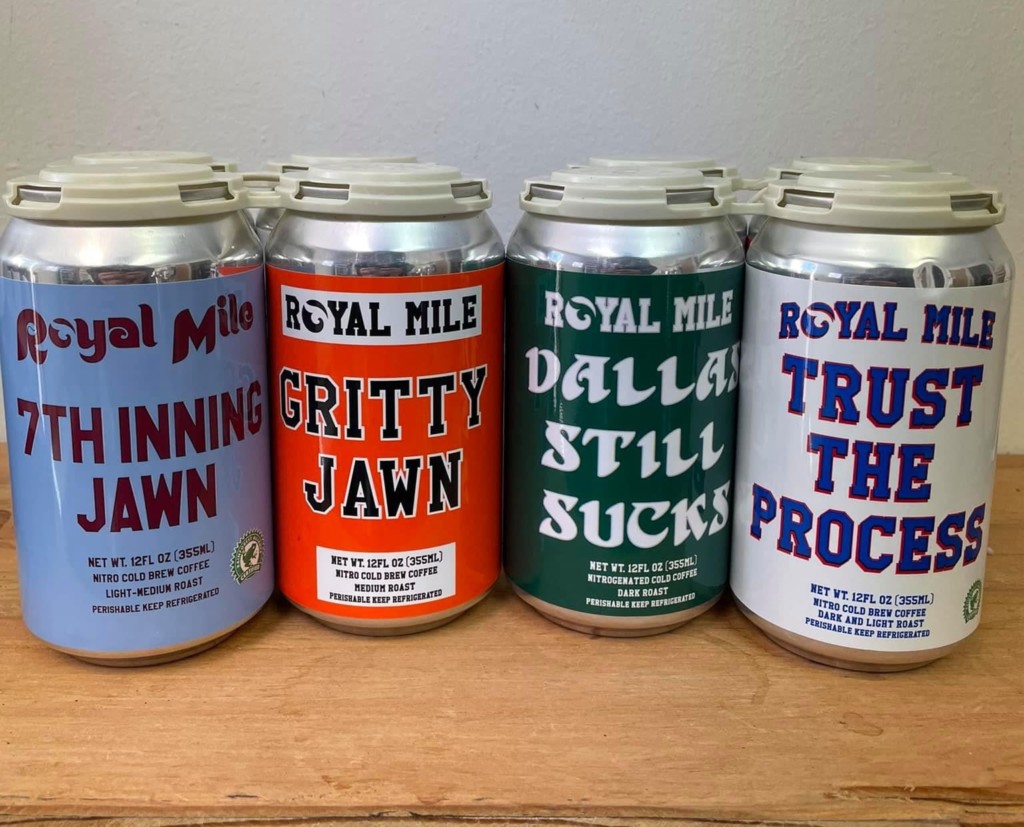 (Lest anyone doubt his allegiances, close-eyed patrons will spot a few key Philadelphia sports figures at the cafe in the form of vintage Starting Lineup toys.)

Blanchard hopes to leverage the same branding versatility in creating custom blends for the café—and future locations—to support their communities.

The cafe carries a Royal Mile “Hawks” blend in red-and-white packaging; Blanchard plans to donate a percentage of its sales to the local school district.

“My mom was a teacher, and I know how underfunded schools are,” he said. “Where can this go, and we can see an actual impact? I feel like it’s a win-win.”

Once the Haddon Township café finds its footing, Blanchard believes he can scale up production again to support additional locations.

“I’m forever in a scouting-around mode,” he said; “I’ve got people who are interested and onboard, and I feel like this is going somewhere, and it’s incumbent upon me to go grow it.”

At the same time, and after acknowledging the work and effort it took to arrive at this moment, Blanchard is able to say, for the first time in years, that he feels like the business is beginning to realize its potential.

“It’s been a long and very hard road,” he said. “Owning a small business is not something I’d advocate for most people.

“[But]  it feels good to breathe for a moment, and feel like I’m getting there.”

Royal Mile is located at 905 White Horse Pike in Haddon Township. The shop is open from 7:30 a.m. to 1:30 p.m. Wednesday through Sunday, with expanded hours planned as business grows. For more information, visit royalmilecoffee.com.