Trending
You are at:Home»Business»Too Good To Go: ‘Food Rescue’ App Could be a Stopgap for Restaurant Waste, Food Insecurity

In restaurant-heavy South Jersey, a Danish software company is connecting customers with unsold food items and businesses with some financial return on products that would otherwise end up in a landfill. 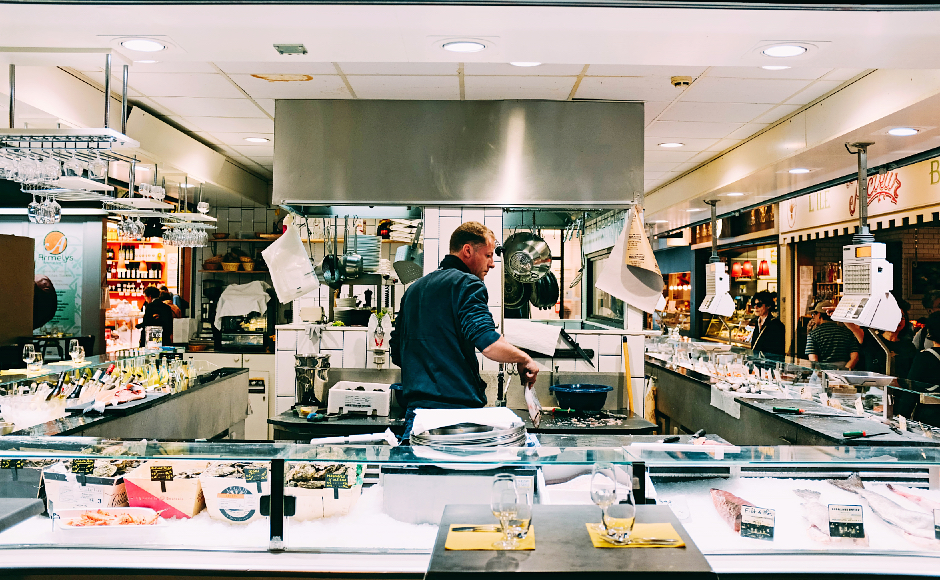 A chef works in an open kitchen. Credit: Adrien Olichon via Unsplash.

Ask any successful restaurateur how to keep a food-based business going, and one of the first things they’ll tell you is “control your costs.”

According to a 2018 analysis by ReFED, a Long Island, New York-based nonprofit that focuses on data-driven approaches to eliminating food waste, American restaurants generate 11 million tons of waste costing more than $25 billion annually.

Those calculations don’t only include scraps of unusable raw ingredients or expired products, but unsold, prepared meals as well.

At the same time, according to Feeding America, the largest hunger relief entity in the country, more than 38 million people nationwide (12 million of them children) don’t regularly get enough to eat. This condition, described as food insecurity, is defined by the U.S. Department of Agriculture as “a household-level economic and social condition of limited or uncertain access to adequate food.”

Addressing that volume of food waste and lack of access to nutrition requires an intersectional approach spanning large- and small-scale efforts.

One potential tool for doing both is an app from Danish B corp., Too Good To Go. The software, which has made its way across Europe since 2016, connects restaurants with shoppers who are willing to buy unsold products at one-third of their retail value to keep them from going into a landfill.

Sales specialist Adam Erace, who launched Too Good To Go in the Philadelphia area last year said the platform is designed to offer “a smooth interface” for restaurants and their customers “to save as much food as we possibly can.

“The whole idea that 30 percent of the world’s food is wasted is a pretty sad statistic,” Erace said. “We’re here to help combat that, and get these surplus, unsold, imperfect foods into people’s hands at a discount.”

In the Too Good To Go app, customers can search participating businesses within a geographic area for “surprise bags” priced at $3.99, $4.99, or $5.99.

The bags are filled with food items valued at three times their retail cost; e.g., a $3.99 bag contains items that normally would sell for about $12. Too Good To Go collects a flat fee of $1.79 per bag, processes the transaction in the app, and pays out its partner restaurants quarterly. 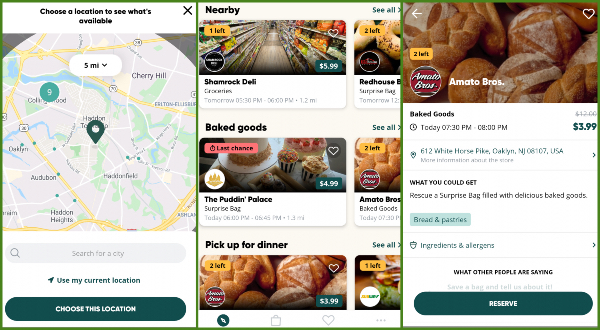 “Everybody’s excess varies on a daily basis,” Erace said. “Sometimes you sell out; sometimes you’re left with a whole bunch of stuff. It really allows the partners to utilize this platform based off what their daily need is.

“If this product is getting disposed of, it is otherwise a loss,” he said. “We are here to bring you some revenues with the hope that the individual who rescues a surprise bag may become a customer in the long run.”

After starting in Philadelphia with known brands like Rival Bros. Coffee and Lost Bread, Erace said Too Good To Go is now finding its footing in South Jersey with businesses like The Pop Shop in Collingswood, Nocella’s Ristorante in Haddonfield, Red House Bagels in Audubon, and Norma’s Mediterranean Restaurant in Cherry Hill.

“There’s some businesses that do one bag a day, and some that do five or six bags a day,” Erace said. “If you have an opportunity to recoup your costs on product on a relatively consistent basis, it is just found money for people, and it’s reliable in that sense.” 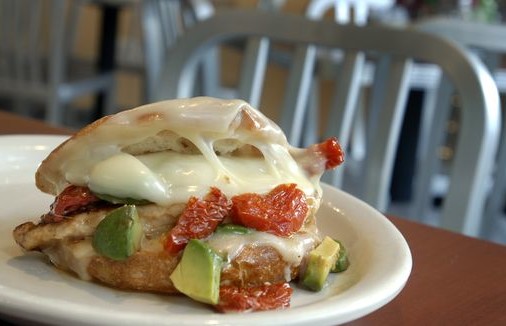 Jessica O’Donnell, general manager at The Pop Shop, said the service “makes me feel great as a person.”

O’Donnell, who spent 15 years at Good Dog in Philadelphia, said she often struggled with disposing of unsold bread at the end of a slow day there.

“Once a year, I would probably take two or three hours, and call around to every shelter to find out who would pick up food donations,” she said.

To her dismay, O’Donnell couldn’t find anyone willing to take any of her unsold food, not even bread that had been delivered fresh that morning.

“I hate wasting,” she said.

At The Pop Shop, which caters parties and buffet events, Too Good To Go has become a great way to distribute leftovers, O’Donnell said.

“We do our pickup an hour before we close, so even if we get something at the end after that, we pack it up, refrigerate it right away, and then we have it for the next day,” she said. “It’s still fresh; it’s still good.”

Reimbursements from the service amount to “a couple hundred bucks” every quarter, O’Donnell said, “but if it shaves a percent or half a percent off your food costs, especially with the price of everything being so ridiculous, that’s big.”

Norma’s chef-owner Elias Bitar said Too Good To Go has helped his restaurant cut down on food waste that would have originated from incorrectly prepared orders, as well as from about-to-expire products in its onsite market of imported goods.

“There’s certain things you can’t back up, [like a] sandwich made with sauce when they asked for it without sauce, or you’ve already put the soup into a container, and realize it was supposed to be something else,” Bitar said.

“You might as well give that away, and try to earn a new customer, rather than throw it away or pray that somebody orders the same thing in the next little bit. 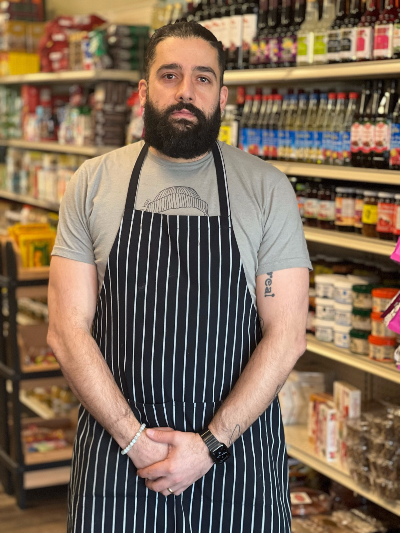 “On the gourmet market side, you do have products that might take up some shelf space, and then, before you know it, they’re up to their best-by date,” Bitar said.

“A person who’s paying 30 percent to get it doesn’t care.”

Bitar said Too Good To Go has also helped introduce his food to new customers who then supplemented their surprise bags with some retail-priced products from his shelves.

“Really, you’re subsidizing some exposure and paying for it differently,” he said.

For some restaurants, the process hasn’t worked as well.

Dave Murray of Crumb in Haddonfield said he discontinued Too Good To Go after discovering it wasn’t a good fit for his business.

“We were big on it,” he said. “We didn’t treat it like we were giving people stuff we couldn’t sell, we treated them like they were customers coming through our door.

“But then I’ve got people calling and asking, ‘Do you know what you’re going to have today?’ and they try to negotiate what’s in the bag,” he said.

For Murray, who keeps tight controls on his product costs, it wasn’t worth it to discount his unsold meals, plus the cost of their expensive, compostable packaging, for a reimbursement he couldn’t recoup until three months later.

“I am all for somebody breaking even by being part of Too Good To Go,” he said. “At the same time, there’s other businesses for which it just doesn’t make sense.

“If you’re throwing stuff away, sure, it’s worth it,” Murray said. “We prefer to sell out of everything. I’d rather post a discount on our social media and keep it in-house.” 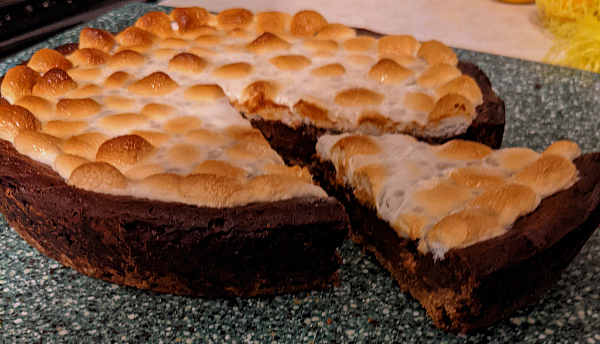 ‘A cheat code to the culinary world’

In addition to helping address food waste, Too Good To Go is also finding adherents among the culinarily adventurous.

Anna Moss of Oaklyn, who operates a tutoring and test prep company called Mind The Test, said she and her husband used the app to explore new places to eat while living in the UK.

“I really like trying new things, especially bakeries, but that becomes expensive, and it can be overwhelming, too,” Moss said. “There’s no way I’m going to try every bakery in London, but having it narrowed down helps.

“It really feels like a cheat code to the culinary world,” she said. “I could just go to these places that I would never really be able to afford at all. I never had anything that was less than fresh; it’s the same stuff, and it’s just as good.”

Moss said that she and her husband still use Too Good To Go whenever they explore a new area. It’s led her to places that she’s patronized again thereafter, like Cat’s Creations in Merchantville, or Manhattan Bagels in Cherry Hill, where she got “an absurd amount of bagels” from a surprise bag.

However, Moss, who has a number of food allergies, said the bags can present challenges for those with restrictive diets. Even for those without such issues, their contents may force shoppers to be creative.

“Once, at Yogo Factory, we came home with some Butterfingers that had melted together and a bunch of frozen yogurt,” Moss said. “We ended up making a double-chocolate Butterfingers s’mores tart.”

Another drawback she observed is the amount of unrecyclable waste that takeout food generates, which undercuts the sustainability goals of Too Good To Go. Many establishments still use Styrofoam containers and plastic cutlery that can end up in a landfill even if the food they contain doesn’t.

But for those who are willing to “embrace the treasure hunt,” Moss said it’s a fun way to support local businesses and explore her community.

“You might get something totally unexpected,” she said. “It might be something that you have to cook with. But you’re spending a fraction of what you would spend otherwise, so if there’s something in there that you don’t really like, you’re still getting your money’s worth.” 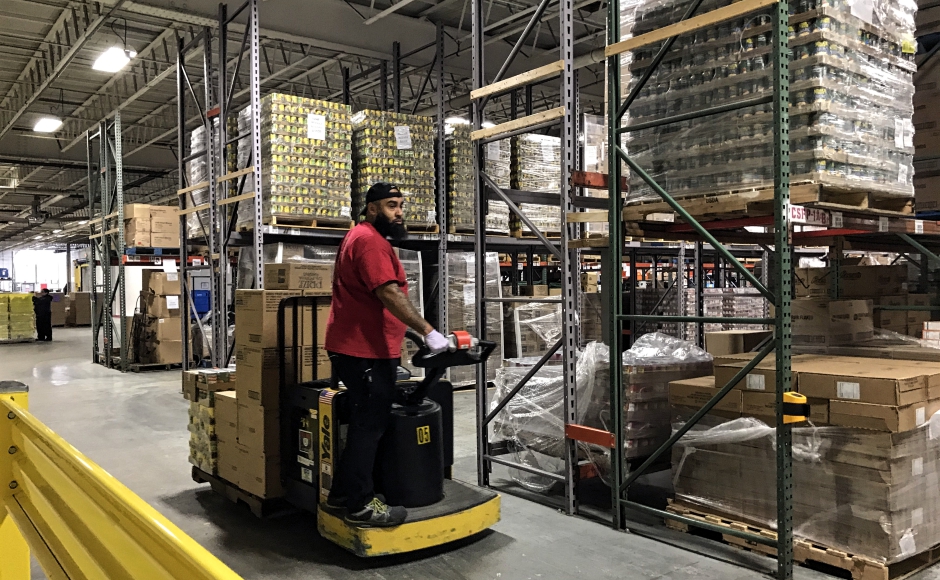 ‘We can all do a little bit and it all matters’

To Sarah Geiger, Director of Programs and Services at the Food Bank of South Jersey, programs like Too Good To Go could be a potentially valuable way to put inexpensive food into the hands of hungry people with minimal friction.

However, they can’t address the most significant drivers of food waste, which she identified as manufacturer-dictated sell-by, use-by, and best-by dates.

The USDA estimates that as much as 30 percent of food loss and waste in America occurs at the retail and customer level, in no small part because such dating conventions can lead customers to toss out usable items out of fear that they are unsafe to consume.

That’s an issue that can only be corrected through regulation, Geiger said.

Food banks work to extend the usability of products that have surpassed their “best-by” dates through “rescue” partnerships with farmers and grocers, which receive tax write-offs for every pound of unsold food that they donate. Apps like Food Connect perform a similar function by leveraging drivers to pick up food donations or helping soup kitchens receive things they need.

Geiger believes a service like Too Good To Go could address food waste among smaller businesses that don’t typically connect with food banks and pantries while supporting food-insecure people in their communities.

“At the micro scale, we can all do a little bit and it all matters,” Geiger said. “As with most programs like this, who are they serving? Is it geared toward the donor, or is it geared toward people in need? Success is made by balancing both.

“Getting food into the hands of people who need it at the right price, the right time, helps with that in-my-backyard, on-my-doorstep solution,” she said. “This is a slice of the market that is not being met.”