The occupants of a passenger vehicle were killed in a collision with a Lawnside fire apparatus that also sent three firefighters to the hospital for evaluation of their injuries. This is a developing story. 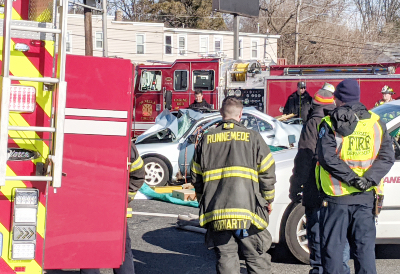 The scene of a fatal vehicle crash in Magnolia. Credit: Matt Skoufalos.

Bishop and Endicott were in a Nissan sedan that collided with a Lawnside fire vehicle on the White Horse Pike in Magnolia January 19.

According to Camden County Public Affairs Director Dan Keashen, the incident occurred a little before 9:30 a.m. at the intersection of Warwick Road.

Officials report that the Lawnside fire apparatus was responding to a cardiac emergency at the time of the collision.

Three firefighters in the vehicle were transported to Jefferson Stratford Hospital for evaluation.

Their injuries, which had initially been reported as significant, were later found not to be so, said Andrew Kramer, spokesperson for the Camden County Prosecutor’s Office (CCPO). 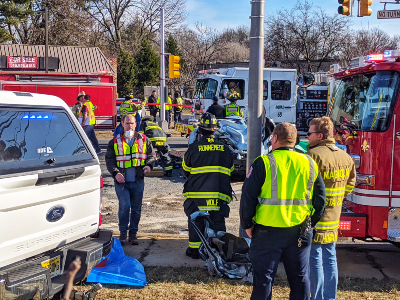 Firefighters at the scene of a vehicle crash on the White Horse Pike in Magnolia. Credit: Matt Skoufalos.

Kramer said they declined treatment at the scene of the crash.

More information is expected to be released with the completion of the crash scene investigation.