Alexander Dejesus of Philadelphia and Ammar Hall of Camden were arrested just an hour apart from one another Tuesday. Both are wanted for attempted murder of two Camden County Police detectives. 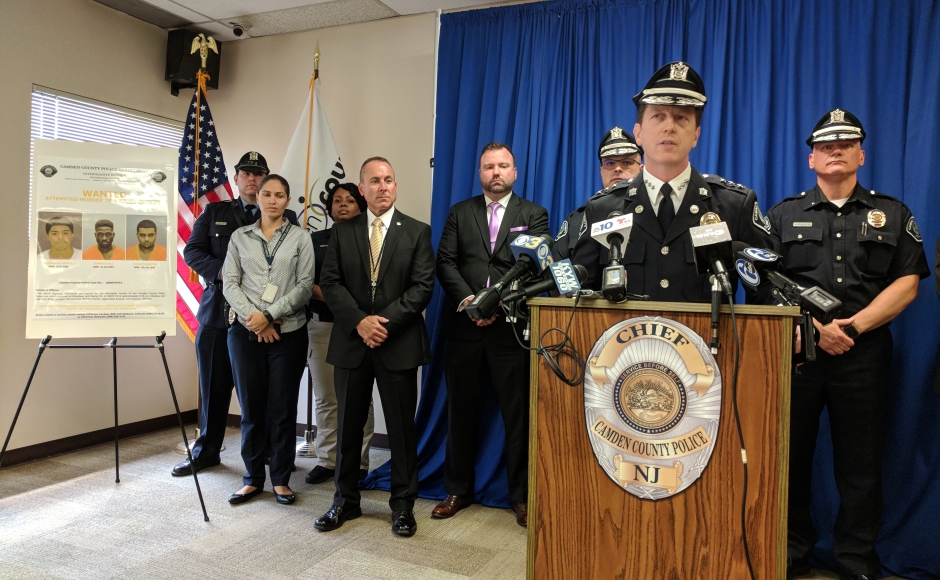 Camden County Police spokesperson Dan Keashen said Ammar Hall, 26, of Camden City was arrested at 5:20 p.m. on foot in the streets of Kensington.

Hall was unarmed, and has been remanded to Philadelphia Police.

An hour later, 19-year-old Alexander Dejesus of Philadelphia was apprehended at a home in Kensington. Keashen said authorities are currently applying for search warrants for the property.

A third man wanted in the incident, 21-year-old Juan Figueroa of Camden, was apprehended Saturday night in Gloucester City.

Hall and Dejesus await extradition to New Jersey on a slew of charges, including attempted murder, conspiracy to commit murder, aggravated assault, and weapons offenses. They all stem from an alleged August 7 ambush shooting of two Camden County plainclothes detectives.

Alexander Dejesus, 19, of Philadelphia, and Ammar Hall, 26, and Juan Figueroa, 21, both of Camden, are wanted in connection with the August 7 ambush shooting of two Camden police. Credit: Matt Skoufalos.

The detectives are physically unharmed, but are dealing with trauma from the attack, Camden County Police Chief Scott Thomson said Friday.

“These were seasoned, good cops, good detectives, but they are human beings at the end of the day,” Thomson said. “They were sitting in a vehicle that was fired upon more than 20 times, and someone tried to kill them. That has an impact.”

The arrests of all three suspects in the attack “buoyed their spirits tonight,” Keashen said. Numerous law enforcement agencies have worked the case nonstop for two weeks, even putting up a $60,000 reward.

“It was a tremendous job by the U.S. Marshals task force, FBI, and ATF,” he said. “They made this all possible. We are extremely overjoyed to have these individuals off the street.”

Keashen said that police believe the attack was gang-related. He wouldn’t comment on any working theories as to the motive behind the shooting, citing the need for police to interview the suspects in custody.

All three are expected to face preliminary court appearances soon.