Trending
You are at:Home»Government»Camden County»Camden Breaks Ground on Alberta Woods Park, First of Five Planned in 2018

Thanks to a $5-million investment from the Camden County government, five neighborhood parks will be overhauled in Camden City in 2018. Alberta Woods Park should wrap by June, officials say. 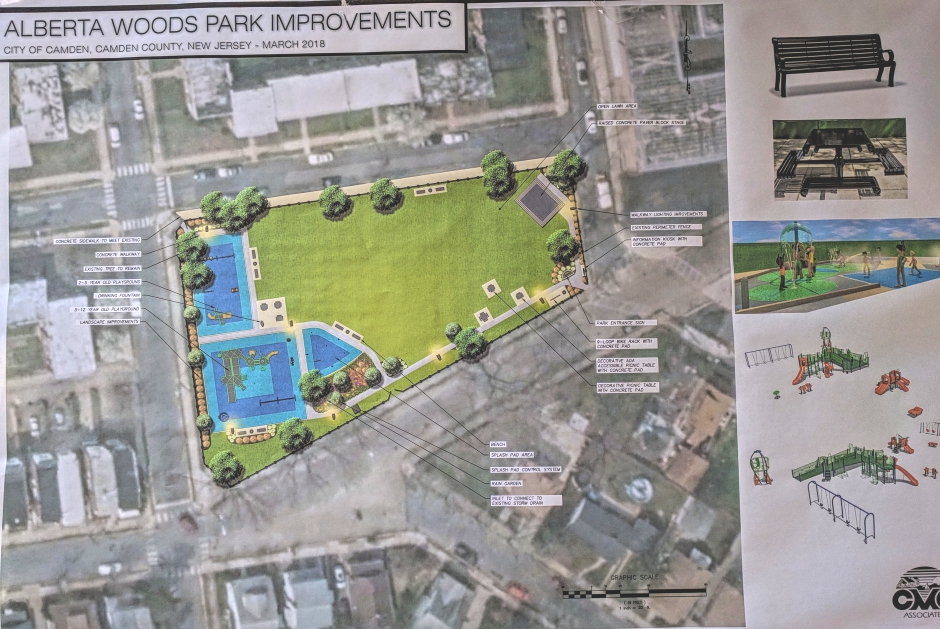 On Tuesday, Camden officials broke ground on the first of five planned restoration projects they say will remediate substandard conditions at neighborhood parks throughout the city.

The Alberta Woods Park at Fremont Avenue and South Dudley Street in East Camden is the first to get a $770,000 boost from some $5 million in county dollars allocated to the task.

Camden has worked to establish several community parks in the past few years, including the Cooper’s Poynt project, which rose on the site of the former Riverfront State Prison, and Phoenix Park in the Waterfront South neighborhood, which turned 60 acres of impervious surface into a 5-million-gallon annual filtration system.

The Cramer Hill waterfront park, a converted landfill, will be cleaned up in 2018; the Gateway riverfront park, which was created from the DRPA-led cleanup of contaminated properties along Admiral Wilson Boulevard, and which is administered by the CCMUA, will also open this year.

The other neighborhood parks on the list include Whitman Park, Reverend Evers Park, and Fourth and Washington Park. 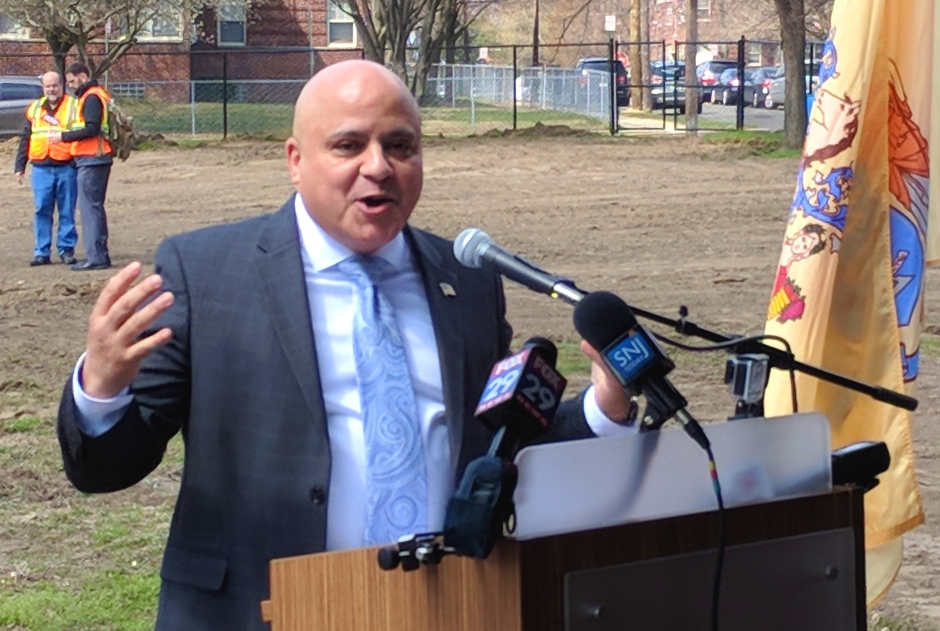 “This investment will go back to benefit residents of this community.”

Moran described the Alberta Woods improvements as having been “designed from the bottom up” with the input of neighborhood residents.

Renovations will include the demolition of deficient play structures, the relocation of a “sprayground” water feature, and the addition of an amphitheater for community performances—“everything that should be here,” Moran said.

“Everything going on in this park was started as a conversation with the children here today and their parents,” he said. “They will be the ambassadors and adopt this park.”

Camden County Freeholder Jeffrey Nash, liaison to the county parks department, said the Camden City parks will be “the best” in the county system. 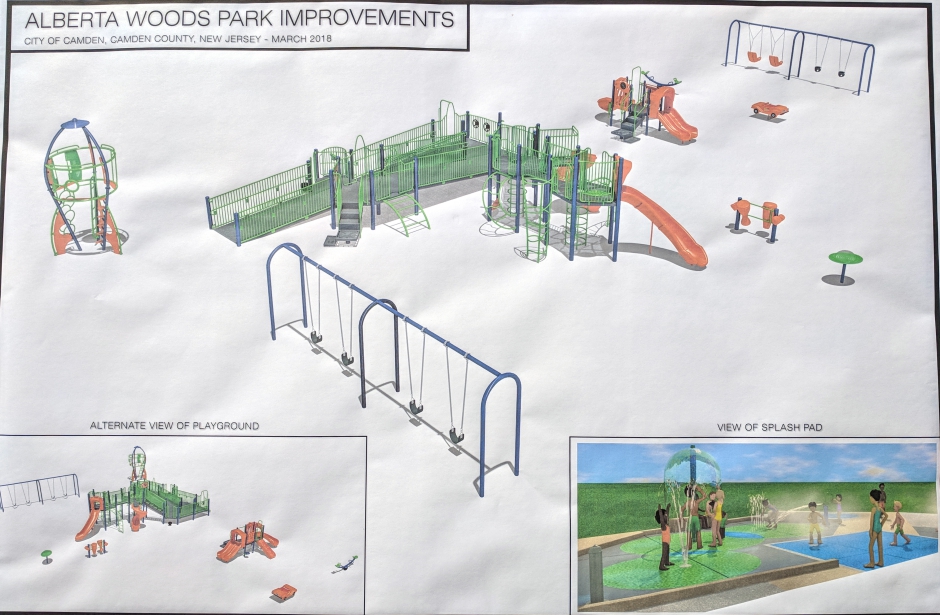 “It is unacceptable that we do not have the quality of parks in this city that children have in the suburbs,” Nash said.

Its board co-chair, Susan Bass Levin, said her administration undertook the renovation or construction of some 50 neighborhood parks during her tenure as mayor of Cherry Hill.

She said the projects in Camden will pay dividends in the community.

“Every child, whatever zip code they live in, should have these opportunities,” Bass Levin said. “It’s what every kid wants, and what every parent wants for their child.”

Meaghann Lawson, principal of the Mastery East Camden middle school, which overlooks the playground, said the school will support its students’ stewardship of the facility. 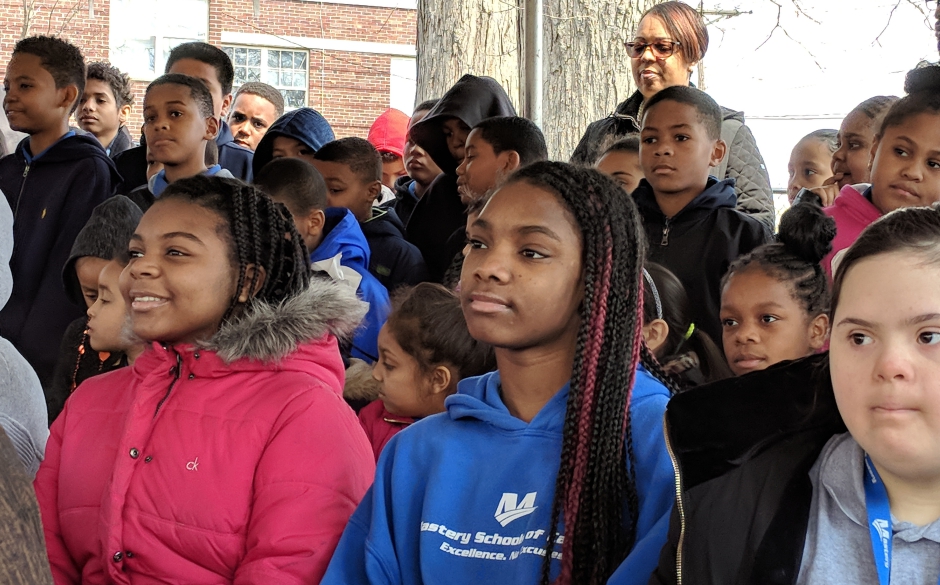 Children from the East Camden neighborhood look on at a press conference announcing the cleanup of Alberta Woods park. Credit: Matt Skoufalos.

“This is our park, our community,” Lawson said.

“They’ll treat it appropriately and be models for that behavior.”

Officials said they will press work crews to finish the project in time to host the June commencement ceremonies at the East Camden Mastery School.

“This is a dream come true,” said Camden City resident Kim Davis at the groundbreaking ceremony.

“Thank you all for daring to dream and make it happen.”