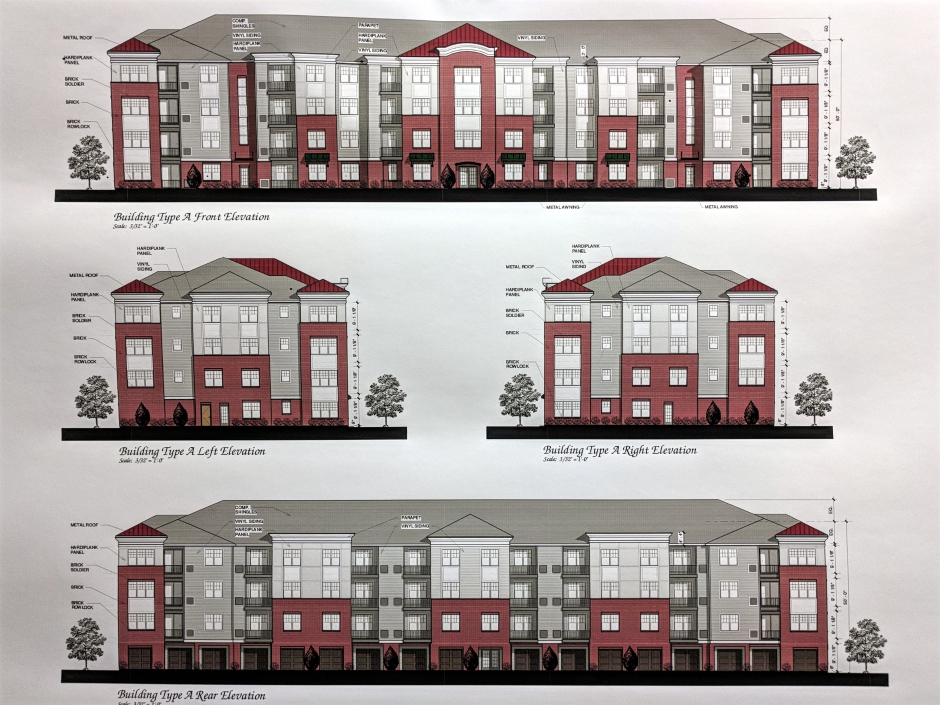 On Monday, the Cherry Hill Planning Board unanimously approved a two-phase redevelopment plan that would construct 370 housing units on the 35-acre Victory Refrigeration site.

Considered the township’s greatest, if not only, opportunity to create a transit-oriented development (TOD), the Victory lot is bordered by Burnt Mill and Woodcrest Roads, the New Jersey Turnpike, and the PATCO Speedline in the Woodcrest neighborhood.

It’s the third and final township parcel to be redeveloped as a result of settling the First Montgomery Group builders remedy lawsuit that preserved the Woodcrest Country Club as open space.

The others include the Hampton Road and Park Boulevard sites, plans for which were recently approved.

The Victory site will overhauled in two phases, dubbed Victory West and Victory East. On the 18.75-acre Victory West, First Montgomery will construct a 370-unit housing project with a 15-percent set-aside for affordable housing. 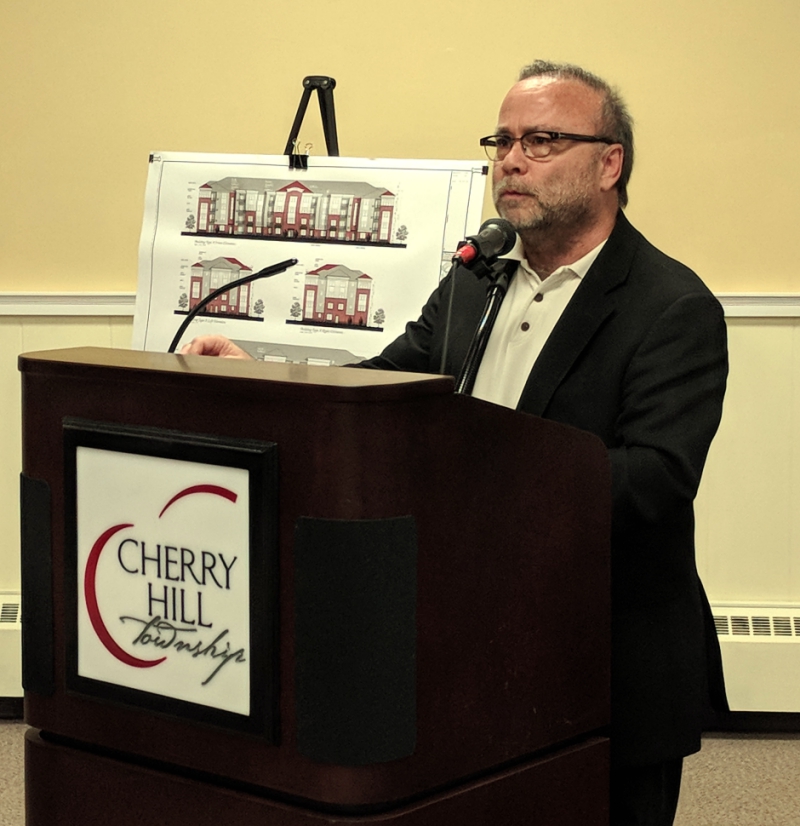 Intended to create “a setting of community character,” the plan is aimed at attracting one- or no-car households, he said.

“Cherry Hill, a first-ring suburb developed for the baby boomers, now has to see what it takes to be viable for the next cohort,” Melvin said.

“The millennials are hoping for a different type of life than [what Americans]  were expecting in 1950.”

Amenities for Victory West include a 3,800-square-foot community center/club house with a 1,200-square-foot pool, outdoor dining area, and fire pit. There’s also a dog park, provisions for wetlands conservation, and a plaza that could support the development of a small retail component for residents.

Group Melvin’s vision statement for the project describes Victory West as “a cohesive neighborhood, providing high-quality housing within walking distance from some of the best transit service in the Greater Philadelphia region, while meeting the township’s fair housing obligations.” 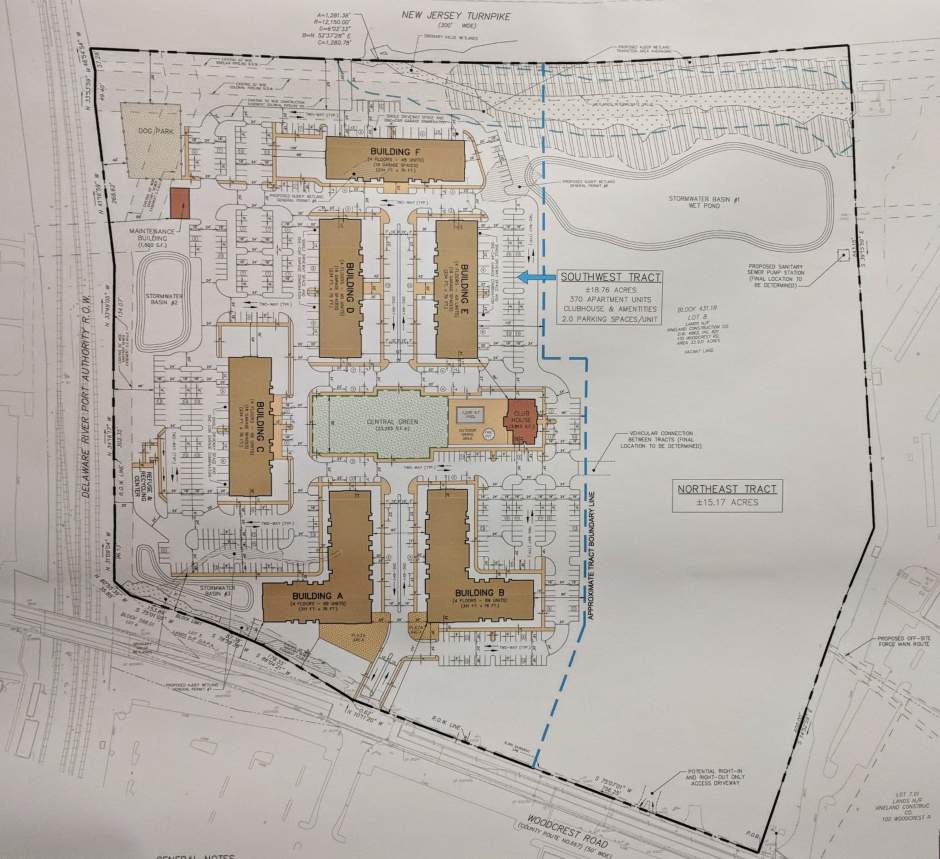 “The requirements of this redevelopment plan for architecture, site planning, network connectivity, and land uses will ensure that the Victory Redevelopment Area becomes the transit-oriented jewel of Cherry Hill Township,” the statement concludes.

“You’re not living in a parking lot,” Melvin said.

Maintaining congruent edges to adjacent properties are a priority to keep the site accessible for the redevelopment of Victory East and within the context of the surrounding neighborhood, Melvin said.

Of special concern is its connectivity to the Woodcrest PATCO Speedline, which is known to be perilous for non-vehicle traffic.

At an April visioning meeting for the site, Natalie Barney of Group Melvin described instances of “people running right across the street from Melrose Avenue to the station,” and the lack of a sidewalk at the intersection of York on the south side of Melrose. 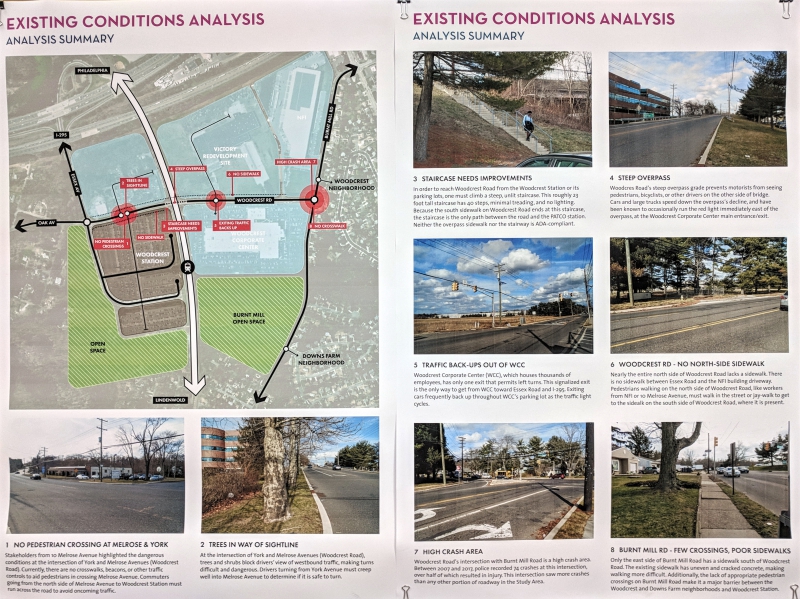 The narrow staircase whereby pedestrians access the Woodcrest station is inaccessible during inclement weather and out of compliance with the Americans with Disabilities Act, Barney said.

Further designs must also correct for a steep, sidewalk-free overpass at the Woodcrest site, traffic back-ups on Woodcrest Road, and the lack of a crosswalk at the “high crash area” of Burnt Mill and Woodcrest Roads, she said.

That intersection has generated 74 accidents since 2007, about seven annually, in half of which people were injured.

Part of that could be alleviated by a Camden County roadways project that will make major changes to the intersection of Haddonfield Road and Woodcrest Road, said Camden County Freeholder Jeff Nash, a Woodcrest resident, at the April visioning meeting.

“I really believe that the signalization that they’re changing and the left-hand lane is going to make a huge difference,” Nash said. “What I’m hearing is Burnt Mill Road is something that we need to further study. 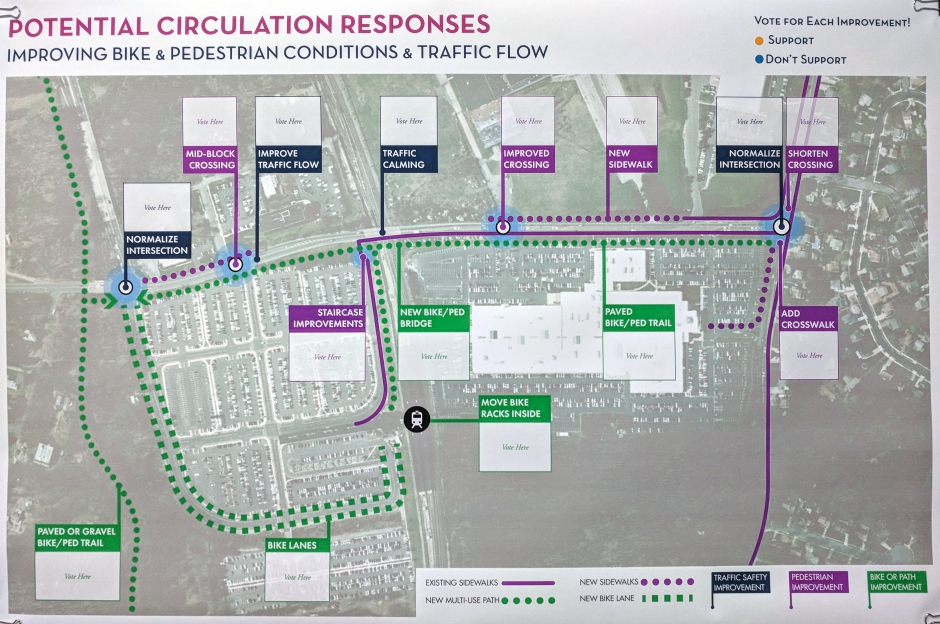 Possible improvements to circulation at the Victory Refrigeration site were presented at an April 2018 visioning meeting. Credit: Matt Skoufalos.

“The county should have another meeting and bring its engineers in to talk about the greater picture of that road beyond 561 [Haddonfield Road],” he said.

“As long as we’re focused on that area, we should expand that to Burnt Mill Road.”

Those added improvements will pair with a plan for the Victory West redevelopment site that includes internal pathways, an eight-foot sidewalk along Woodcrest Road, and clearly delineated pedestrian crosswalks.

Plans for the 15-acre Victory East parcel are farther off, and haven’t been yet solidified. A short list of acceptable uses outlined in the redevelopment plan includes: offices, hotels, retail of less than 15,000 square-feet, continuing care centers, parks and plazas, and places of amusement. 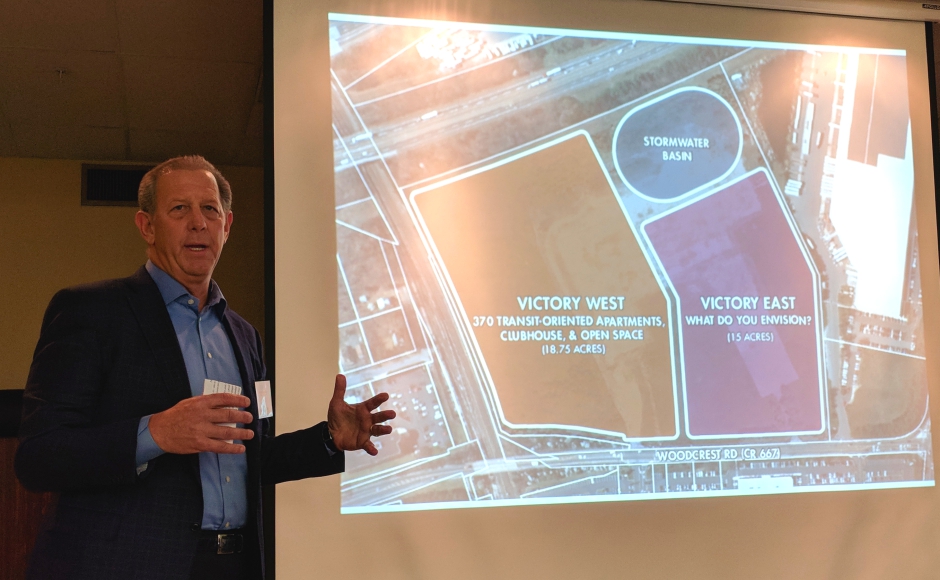 At the visioning meeting, Cherry Hill Mayor Chuck Cahn described the Victory site as being “all about good TOD.

“All we keep hearing about is none of those [redevelopment]  sites are TOD,” Cahn said.

“Here’s the one. This is the one we’ve been holding and waiting for.

“We’ll never have a downtown, but to have people who work in Philadelphia but want to live in Cherry Hill and be able to grab the train, this is a great access point,” Cahn said.

The mayor said he believes the potential of the project, plus the planned improvements to Woodcrest and Burnt Mill Roads, could also help revitalize the slumbering Woodcrest Shopping Center. 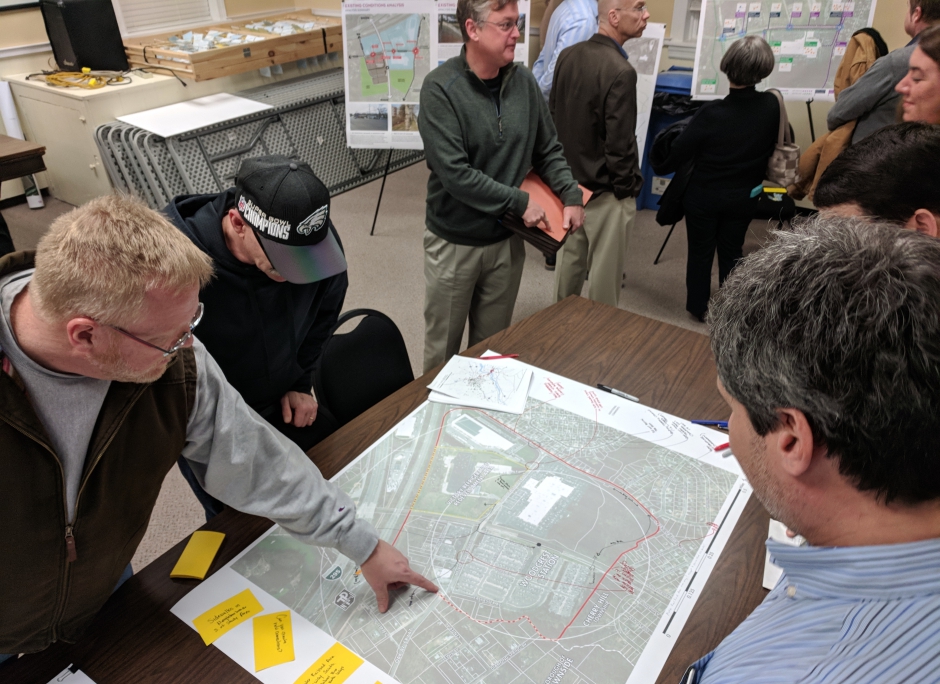 “If you have TOD, it’s only 1/8 of a mile from the apartments to the train station, but you’ve got to make it easy to walk over the bridge,” Cahn said.

“If you make it comfortable, then you encourage people to walk.

“Those things will also help with traffic.”

Cahn believes the project could be on a three-to-five-year timeline from planning and engineering to infrastructure and roadway improvements.

Melvin said that proposals for the Woodcrest PATCO Station multimodal access project are still in the visioning stages.