Citing a desire to connect more closely with voters and collect feedback before putting the issue on the ballot, the board will host public focus groups starting in September.

In April, the Collingswood Board of Education introduced its plans for a $20.2-million athletic complex restoration project with the intention of putting it on the ballot for voters to consider in September.

But pushback on the project price tag and comments from residents who came to the news late has led the board to reconsider its approach.

Rather than forging ahead with a referendum that doesn’t have a majority interest, Board President Jim Hatzell said the body will postpone any ballot initiative until after broader discussions can be had.

“It’s more important to get it right than to go in September, and that’s why we’re going back with this,” Hatzell said. “We’re on hold with the thought of getting more town input on what we’re doing.”

The district will host professionally moderated focus-groups starting in September with the intention of gathering more in-depth community feedback. Organized around the World Café method, the events are intended to help stakeholders discuss the project in small, rotating groups that cultivate a variety of perspectives.

“The loud voices get tamped down and the quiet voices get raised,” Hatzell said. “Everybody might, in a quiet way, get to hear everybody’s perspective.”

Altering the original timeline for the referendum could also salvage the class of 2019 graduation ceremony, which might otherwise be compromised by beginning the project in either the fall or the spring.

If Collingswood approves the plans at the polls in spring 2018, work could begin after the Fourth of July, when the stadium is used for the borough-wide fireworks celebration, Hatzell said.

The high-school field hockey, football, and soccer teams would still lose at least one season’s worth of home games on any timeframe.

Hatzell said the board is still trying to trim the cost of the project, which, at an initial $20.2-million price tag, would add an extra $374 annually to the average borough household tax burden. The latest revisions have it down to $17.3 million, which shakes out to around $256 per household annually on a 20-year bond (the district has a household tax impact calculator here).

The board was able to drive down those costs by taking the second story off a proposed stadium-adjacent building, keeping the weight room in its current location in the high school, and swapping out proposed storage for board offices. Otherwise, the plan will still retain space for the 18-21-year-old special-needs program and playground renovations at each of the district elementary schools. But if focus groups reveal that the price tag is still too unpalatable, further cuts might compromise some of those elements. 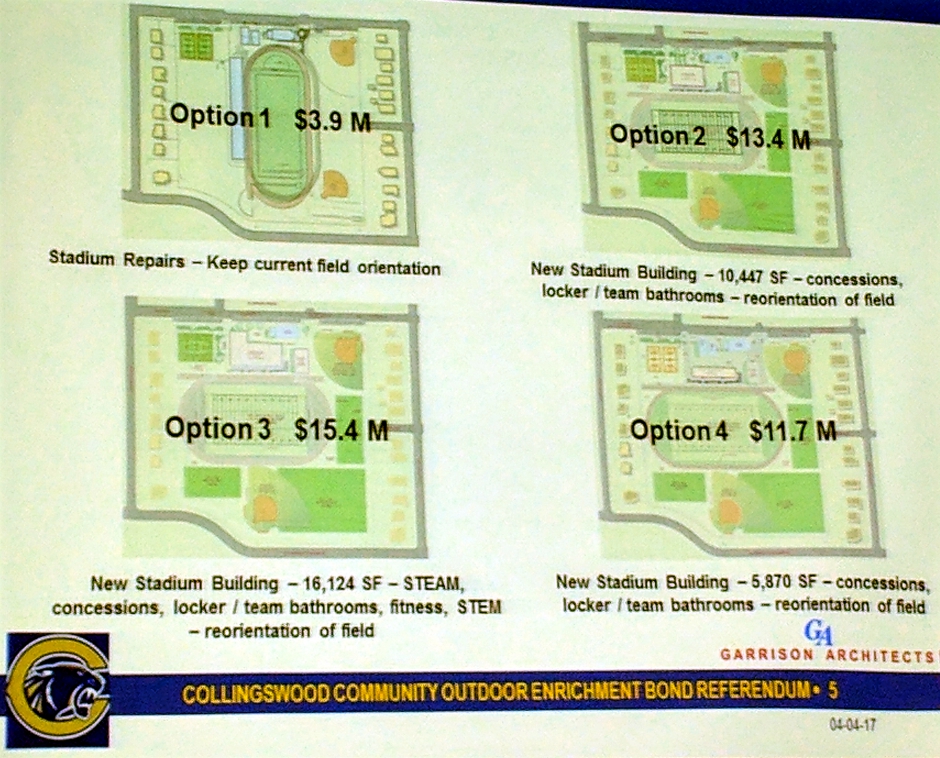 Comparison of the four options the Collingswood BOE considered in its lead-up to the presentation. Credit: Matt Skoufalos.

“If we’re able to discern the sweet spot of a price that people can afford, and $256 is still high, we need to find out what [feature]people feel is less of a priority,” Hatzell said.

As a minimum, Hatzell said repairs to the stadium can’t wait.

He hopes voters will also see the value in updating its facilities for the 18-21-year-old students, not only to allow them to receive the services they need in their community, but also to create a program that could potentially be a magnet for out-of-district revenues.

“What I am really trying to do is listen to what people really want,” Hatzell said. “But we definitely have to do something with the stadium, and the 18-21-year-old program is a valuable thing. It serves a part of the community that has a need.”

Hatzell also said the board also is keeping a weather eye on the infrastructure changes that are coming from Collingswood borough hall. The local government has been displaced from its Haddon Avenue headquarters since an ice storm busted internal drains within the building, and Mayor Jim Maley said the timetable to relocate its operations has been moved up.

“They’re still a little earlier in the process than we are, and we’re thinking about whether there are any places that we could collaborate together,” Hatzell said.

“That’s something that it’s too early to know, but if there was a way of any economics of scale and doing construction together, we would do that.”