The grant-funded project will study the impact of improving non-vehicle traffic around the borough Speedline station, where nearly one in four parked cars originates from within a half-mile. 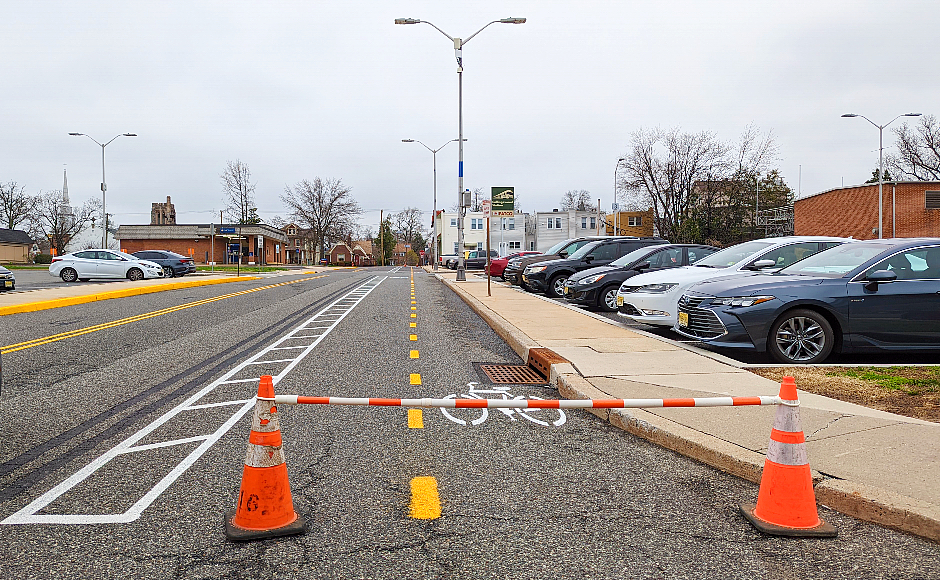 In the latest demonstration project to emerge from the Connect 2020 Collingswood and Haddon Township Bike and Pedestrian Master Plan, the Collingswood Complete Streets Lab will examine the impact of small roadway improvements on accessibility to the borough PATCO Speedline station.

In 2019, a study of vehicles in the Collingswood PATCO parking lot revealed that nearly a quarter (23 percent) of them belonged to people who live within half a mile of the station.

The Complete Streets Lab is intended to explore what potential barriers may prevent PATCO riders from walking or biking to the station instead of driving there.

The various solutions presented in the demonstration project are related to the width of streets in the borough and their capacities to support different types of vehicle traffic.

Some local yield streets are too narrow to accommodate two-way vehicle traffic as well as parking on both sides of the roadway. Others have different volume limitations, or a complicated traffic flow.

Collectively, the temporary fixes contained within the project will endeavor to create a small commuter loop that improves walking and biking safety in the immediate vicinity of the PATCO station, said Collingswood resident Doug Robbins, a planner with the Philadelphia-based engineering firm AECOM.

“The term ‘last mile’ is used in connecting transit users to or from their destination,” Robbins said. “This is almost a ‘last block’ phenomenon.

“With PATCO in particular, the north side of the station is surrounded by a sea of parking lots; it’s often treacherous to navigate with pedestrians and bikes,” he said. “This experiment could form a loop that people could tap into from Maple and Atlantic [Avenues]  to give them a safer path to and from the station.” 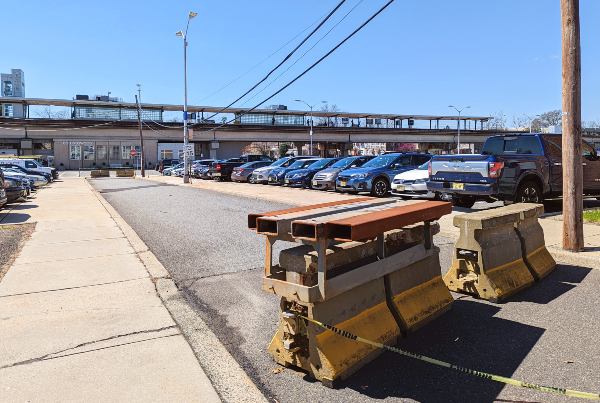 In closing off the lower half of West Stiles Avenue to vehicle traffic, the project will create a “pedestrian plaza” with parking lot games and public education to invite community gathering on approach to the station.

The cycle track will connect the east side of Bilson from North Atlantic Avenue up to Haddon Avenue.

“Folks have already asked, ‘Why do a cycle track there versus traditional bike lanes?’” Robbins said. “Because of the specific width of Bilson, it gives bicyclists the easiest access to PATCO by putting them closer to the PATCO entrance.

“With this width of street, it’s the only bike facility that would provide protection, which was a critical thing that we heard from the ‘All Aboard Atlantic’ test—people wanting to see some sort of facility that offers some additional protection. Delineators will establish a visual and physical barrier.”

On South Atlantic Avenue and on Haddon Avenue, the project will also add sharrows, visual reminders that the travel lane accommodates vehicles and bicycles in a shared context. Sharrows will also be added to Maple Avenue, as will signage describing it as a bicycle boulevard, along with 20 miles-per-hour stencils.

“That’s also based on the recommendations for the larger bike boulevard effort, and giving us an opportunity to test it for a couple blocks on Maple Avenue,” Robbins said. “This will only serve to strengthen the next grant application.”

Other improvements along Maple Avenue include temporary bump-outs at the intersections of East Homestead and Fern Avenues. Straw wattles, which Robbins described as “a giant snake filled with hay and wrapped in a mesh” will let stormwater through while holding back dirt, and forming a temporary curb.

“We’re trying to hint at the idea that these could be rain gardens, or a function that goes beyond just keeping cars from parking too close to the bump-outs,” Robbins said. “The ones on Haddon Avenue are hardened to be representative of Haddon Avenue; the idea here is that these would be softer, landscaped, and would fit into a residential area.” 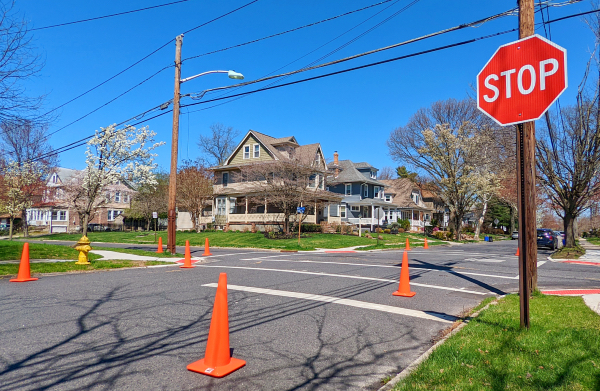 Data collected from the prior demonstration project, dubbed “All Aboard Atlantic Avenue,” has already yielded tangible results.

With a variety of different traffic-calming elements in place, the study demonstrated a 7.3-percent drop in vehicle speeds above 25 miles per hour on Atlantic Avenue, and an 18.5-percent drop in the same speeds along Collings Avenue.

Those appreciable drops in vehicle speeds underscore the reservations that some commuters have expressed about biking or walking to PATCO safely.

Collingswood Commissioner Rob Lewandowski, who walked the surrounding neighborhood to speak with residents before the Complete Streets Lab roll-out, said its chief aim is to make the streets surrounding the station “a little safer and more enjoyable.”

“People do have reasons to get the car,” Lewandowski said. “Some of them are that they feel unsafe, or that the infrastructure’s not conducive to walking or biking.

“Let’s test out different ways we can create more balance between bicyclists, pedestrians, and cars, and get people to think about their own behavior and perhaps make a different choice,” he said.

“When people who live within a half-mile are taking the car, they’re not stopping at a restaurant,” Lewandowski said. “They’re not burning calories. They are burning fossil fuels.” 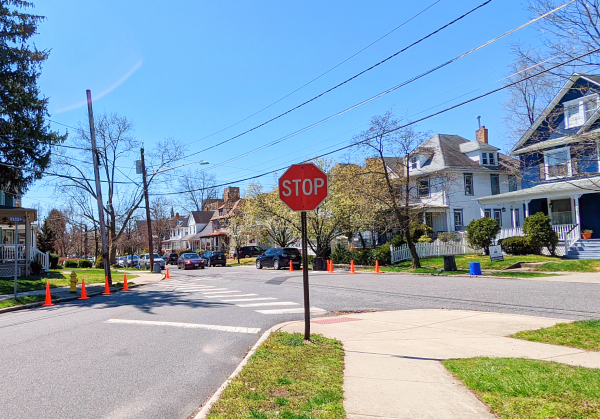 Connect 2020 project coordinator Sandi Kelly said the Complete Streets Lab “is all about trying to fit all the different users on limited space, and it’s very challenging,” Kelly said.

“By inviting the public to be a part of it, there’s more understanding about the challenges that exist.

“We may not get things perfect, and that’s why we’re testing things out,” she said.

“We want to do what the residents want, and we want to make Collingswood a better place.”

Patrick Farley, Program Director of Cross County Connection, the grantee for the Complete Streets Lab and transportation management agency for South Jersey, said the project will include a high degree of interaction with the public, the better to get feedback on its implementation.

In addition to planned interactions with PATCO riders during peak commute times, organizers are also mounting “an encouragement campaign,” which will include posters and flyers promoting walking and biking to the Speedline. All these tactics are designed to drive not just engagement, but meaningful responses from residents.

“You’re going to see us out and about for the month, seeking feedback,” Farley said. “The point of the demo is, do you like this? Do you not? What do you think will work?”

Farley believes that Collingswood is a perfect place for demonstration projects like these because it’s already built with a resilient bike and pedestrian infrastructure, “and PATCO is the perfect place to walk to the train.”

In illustrating potential ways that the borough could better connect riders with PATCO, he thinks the Complete Streets Lab could also demonstrate successful strategies that could be more formally implemented, and weed out the unsuccessful ones.

“It’s a really cool way to do something tactile,” he said. “If you hate it, it’s just paint.”

The Collingswood Complete Streets Lab runs through May 1. The project kicks off with events April 16, including a community bike ride, bike rodeo for kids, and hangout at the West Stiles Avenue pedestrian plaza. For more information, visit Connect2020sj.com.