Thanks to a new legislative framework, the borough has begun work on the first of a handful of abandoned and foreclosed homes to restore them to market value and owner occupancy. 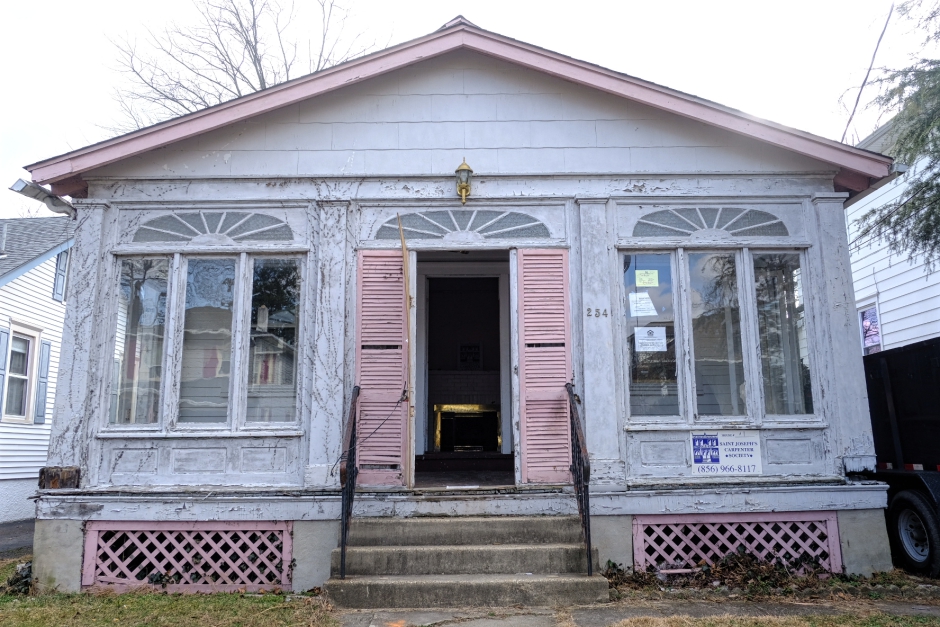 With just a few swings, Collingswood took a sledgehammer not only to the old walls of a dilapidated, two-bedroom home on Harvard Avenue, but to the constraints of banking and legal systems that have paralyzed many communities struggling to deal with the problem of foreclosed and abandoned homes.

The property, which has lain dormant for years in the middle of a vibrant block, was the first the borough government got authorization to bring up to salable condition through a new legislative process dealing with so-called “zombie” properties.

Together in partnership with the St. Joseph’s Carpenter Society of Camden City (SJCS), Collingswood has developed a plan of attack to restore such homes to owner occupancy and put their ratable value back on the borough tax rolls “for another hundred years,” said Collingswood Mayor Jim Maley.

“We return it to a productive use,” Maley said.

To date, Collingswood has dedicated $1 million to the process, which Maley expects will be sufficient to acquire and renovate eight or nine of the approximately 40 to 50 abandoned and foreclosed properties in the borough. 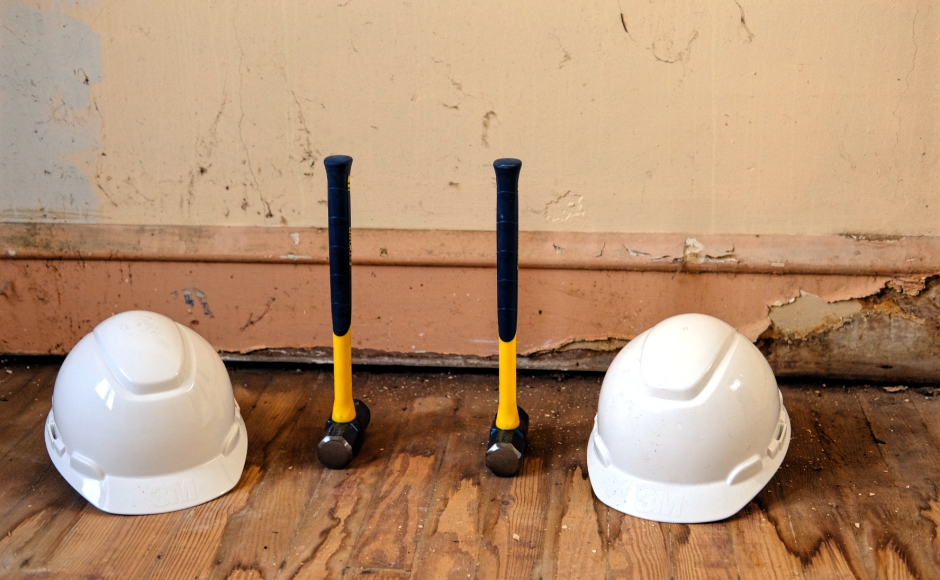 That count is fluid, he said—partly because of the strict legal process whereby the local government can enter a property for the purposes of rehabbing it, and partly because in the 18 months before work began, a number of owners have taken the initiative to make the repairs themselves.

Before the new statutory framework was put into place, Maley said the count was more like 80 or 90 homes.

“It’s not enough to just fine the banks and keep penalizing them,” the mayor said. “These properties are too little” for banks to notice in their portfolios, he said. “They just don’t have the manpower.”

Once a rehabbed home is sold at a market-rate price, the borough recoups its investment. After that, any lienholders are paid with the remainder of the funds, Collingswood clears its debt, and the process can begin again. The entire exercise is done with the force of a court order, but title never passes to the borough, which differentiates it from eminent domain.

“There aren’t many towns that have had to step up and do the work [themselves],” Maley said. 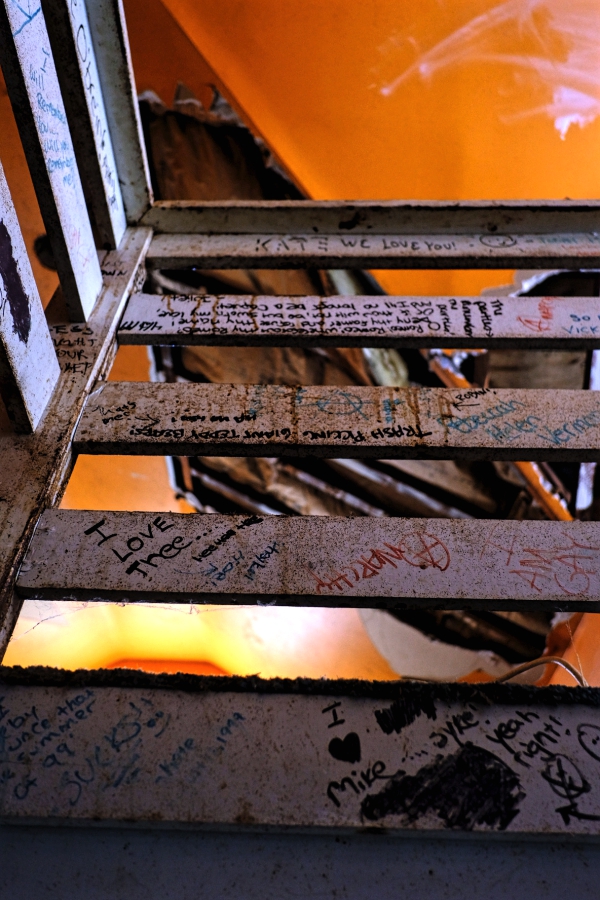 The third floor of the house at 254 Harvard Avenue. Credit: Tricia Burrough.

Cramer Hill native Len Schafer, who serves on the SJCS board, said he was excited to see the Camden City-based organization demonstrating that its success is transferable to communities like Collingswood, Woodbury, and Gloucester City, in which it is also making inroads to do such work.

As a Collingswood resident, however, Schafer said he was also glad to see the borough addressing “the Halloween house” in his neighborhood.

“People took pictures with their kids in front” of the Harvard Avenue property, Schafer said, because its overgrown vines and dilapidated latticework served as a handy (and spooky) backdrop.

For neighbors on the blocks blighted by abandoned properties, however, the photo opportunities are less charming out of season.

Interim Collingswood Commissioner Rob Lewandowski said he’s cut the grass and shoveled the driveway of a similar property on his block. Until the borough moved to address the issue through abandoned property laws, neighbors had little hope of titleholders getting the buildings into shape to be sold.

“We want homes like this reconditioned and back on the market,” Lewandowski said. “We want neighbors to have homes that are safe and well-kept. We don’t want empty homes on the block.”

The home on Lewandowski’s block isn’t on the borough’s list of target properties anymore, he said. Once the rehabilitation process was begun, the bank that owned it fixed it up and sold it to new owners. 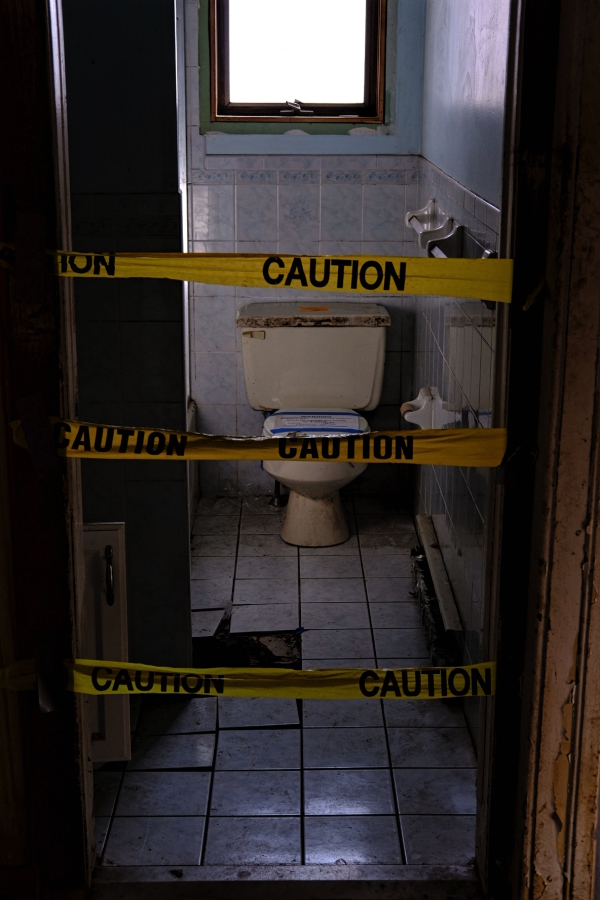 SJCS Director Pilar Hogan Closkey said the work on the property at 254 Harvard Avenue could take as long as three or four months and cost anywhere from $100,000 to $150,000.

It’s a small home, just two bedrooms, one bathroom, and an upstairs that has potential to be converted into a third room.

But without the work, its outdated electrical and HVAC systems would never pass inspection, to say nothing of the condition of its floors and walls.

“It’s not a huge home, but it’s on a fantastic street with all the amenities; so close to the downtown,” Hogan Closkey said.

“We’d like to have a family in it this summer.”