Trending
You are at:Home»Business»Crumb: Haddonfield Chefs Ready a Gourmet ‘Sandwich and Salad Joint’ from Scratch

In March, Dave Murray was closing the doors to Denim, his Haddonfield restaurant. Six months later, he and Walter Gouldsbury are opening a high-end sandwich and salad concept just a block away. 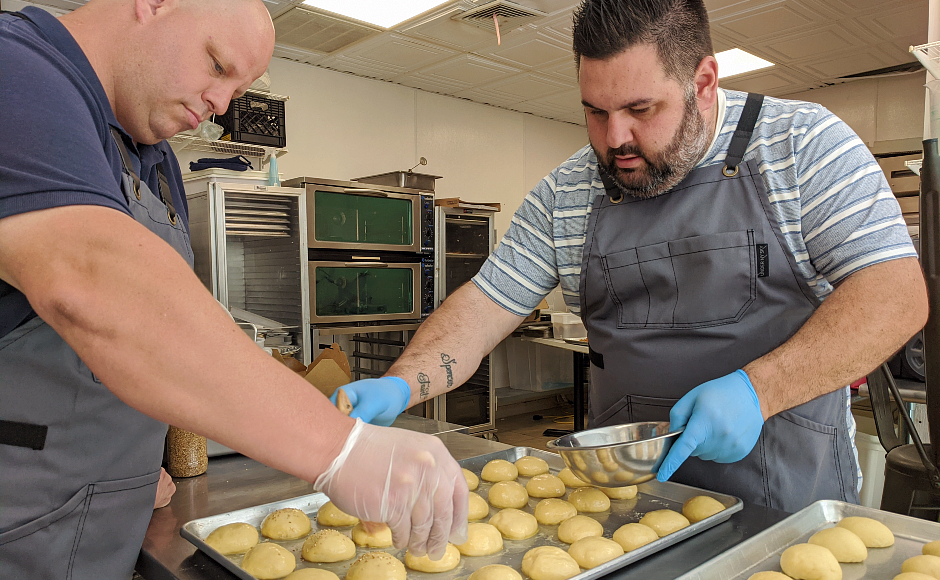 Sunlight pours through a wall of windows under the low-slung brick archway at 43 King’s Highway East.

Inside the former kitchen of TÁL32 Bespoke Confectionary, chef Dave Murray bathes a tray of freshly baked brioche buns in an egg wash.

Across the table, his partner, chef Walter Gouldsbury tops each of the rolls with sesame seeds, nudging each one into place along the baking sheet.

Back in March, Murray stepped aside from Denim, his 130-seat modern American bistro, at 116 King’s Highway East, and turned over the lease to Chef Anthony Lipot, who opened Wanda BYOB in its place. Half a year later, and half a block away, he’s getting ready to turn around a new “sandwich and salad joint” called Crumb.

That moniker intentionally understates the intensity with which both chefs are approaching the concept. More accurately, Murray and Gouldsbury aim to create dishes with homestyle roots, executed to professional precision.

“‘Scratch kitchen’ is played out,” Murray said. “We don’t want to serve anything that we’re not making.”

“When you start off with the best-quality ingredients you can get, you put technique and talent behind it, and you respect the ingredients in the process, you just produce good food,” Gouldsbury said.

“You don’t need to beat someone over the head about cooking with love,” he said. “When you taste it, you’ll know the quality.”

Although he may have stepped away from the daily business of running a restaurant, Murray was never far from the kitchen. Throughout the past six months, he immersed himself in his family and let his imagination wander.

It landed on bread.

In the bread world, “crumb” describes both the patterning of air pockets within a loaf, and an element of its composition that can be analyzed for quality. It’s Murray’s way of communicating the importance of the base of a sandwich in proportion to everything else that goes on it. 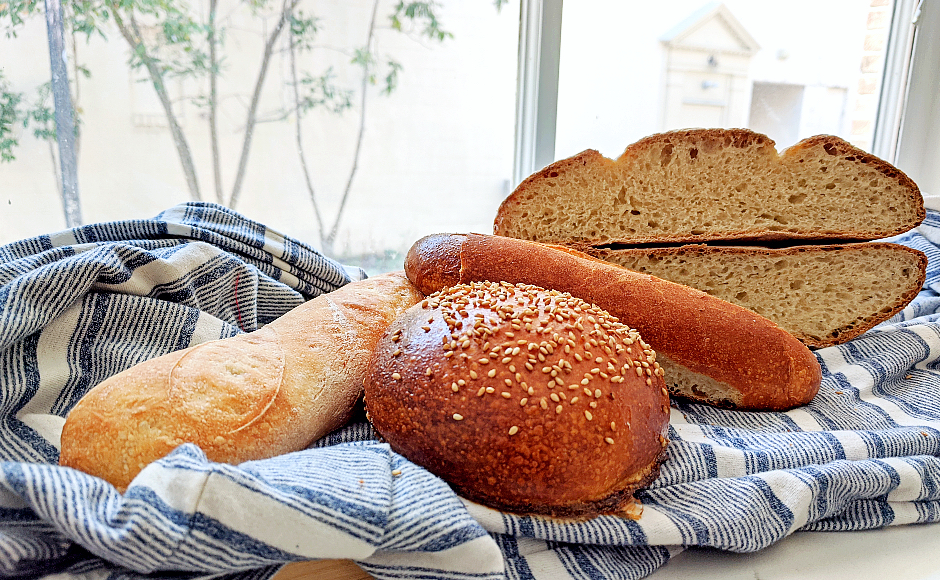 At Crumb, glossy brioches, airy focaccias, hearty baguettes, and rustic sandwich loaves will be made in-house through a days-long cold fermentation process.

Tuna melts will start with house-cooked tuna loin; produce will be organic and sourced locally.

“If people come in and order a chicken sandwich, I want them to say, ‘This is the best chicken sandwich I’ve ever had,’” Murray said. “They’ll know what they’re getting will be quality, and they’ll find that it’s reflected in the taste.”

Although their menu is still in development, Murray and Gouldsbury have promised their sandwiches will be complemented by fresh and cooked vegetable sides, whole-grain dishes, green salads, and similar accompaniments.

Gouldsbury, a pastry specialist who also operates mobile dessert business, The Custard Cart, will showcase his canelés, caramelized rum-and-vanilla, custard-filled pastries from Bourdeaux; bomboloni, filled donuts from Tuscany; and possibly a crumb cake in homage to the shop’s name.

“You’re not getting a tasting menu during the day, but we’re putting the same efforts into these sandwiches,” Gouldsbury said. “We’re going to have a repertoire; everything’s going to be done with care and integrity.”

Murray sourced a handful of prints from McCarthy’s Celebs on Sandwiches instagram account for the shop, including an image of Anthony Bourdain, his culinary spirit guide, seated atop a heap of pastrami.

Touches like these reflect how the chef who shut down Denim out of concerns for his health amid pandemic-pivot fatigue feels like he’s in a healthier place for his fresh start.

“I’m making great strides, but one of the biggest factors of my health was anxiety and work-related stress,” he said. “A lot of times, I put too much pressure on myself; it took a toll on me mentally and physically.

“I needed someone I could lean on,” Murray said. “Walter Gouldsbury has a tremendous reputation. He’s a resident of this town; he has standards that surpass even mine.

“If I could pick anyone to have been my partner, he’s the first person who popped into my head,” Murray said. “Not only can he represent culinary swag, but we share the same beliefs.”

“For this project here, we have a cohesive vision,” Gouldsbury said. ”It makes things a lot easier; business is tough enough. I think there’s still progress that needs to be made in town on food, on many levels. Hopefully we’ll fill some voids with what we’re doing.”

Crumb is targeting a mid-September opening at 43 King’s Highway East in downtown Haddonfield. For more information, visit @crumbhaddonfield on Instagram.