Trending
You are at:Home»Government»Merchantville Residents Get First Look at Proposed, 88-Unit, Downtown Redevelopment

The mixed-use project could be on at least a three-year timeline, but stands to help the borough activate a blighted space at the hub of its commercial district. 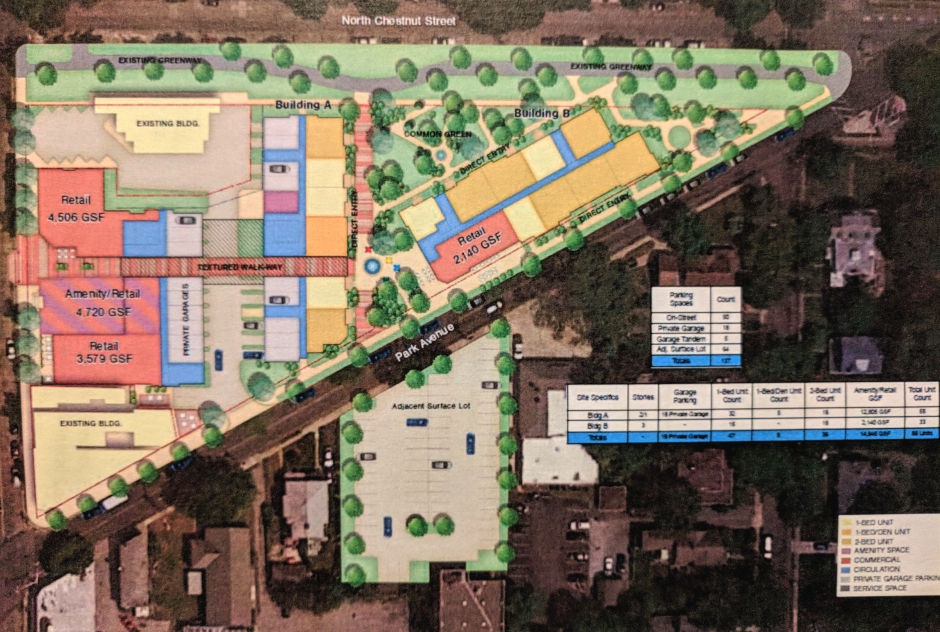 For more than 15 years, Merchantville has been working to redevelop a blighted area in the center of its downtown.

As recently as two years ago, the borough worked through a visioning process for the triangle bordered by Chestnut and Centre Streets and Park Avenue.

From that process emerged a pair of designs informed by community input and local leaders.

On Monday, Merchantville Mayor Ted Brennan led a town forum on the newest plans for the space, drafted in concert with Viking Associates of Cherry Hill and the Norristown, PA-based Barton Partners.

Tentatively dubbed the Merchantville Town Centre, the project would add 88 one- (47) and two-bedroom (36) units to the borough downtown in two phases, along with 15,000-16,000 square-feet of new retail, and a little more than an acre of public space.

In a document accompanying the proposal, Viking described the project as “a middle-to-upper-market, multi-family rental community with some limited, ground-floor retail space:

“This town center will feature green spaces for gatherings and markets, retail shops and services with outdoor seating, beautiful residential apartment buildings, and stunning design elements befitting the borough’s charm… We foresee this project as a catalyst in cementing Merchantville’s desirability for commerce and residency approaching that of Collingswood and Haddonfield.”

The buildings haven’t yet been designed, but Viking plans for them to exceed no more than 48 feet in height; approximately three stories in total. The proposal envisions “traditional finishes will be used to complement those historic homes and buildings in the borough…and present a unique exterior structure rather.” It also considers rooftop amenities for tenants.

Projected monthly rents would average $1,464 for a one-bedroom unit and $1,915 for a two-bedroom unit; triple-net retail tenants could pay as much as $14 per square-foot of space.

The cost of the project could range from $14 to $19 million, according to Viking’s analysis, which also projects a three-year timeline from approval of redevelopment plans to completion of construction. 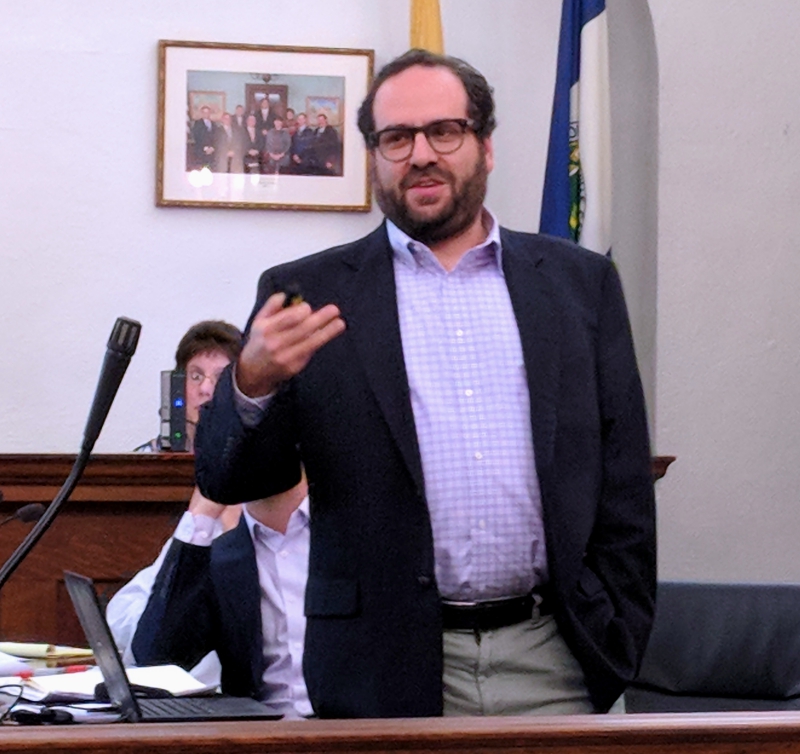 Seth Shapiro, Director of Urban Design at Barton Partners, praised the “eclectic” architecture and small-town charm of Merchantville in his remarks Monday night.

Shapiro described the intention of the redevelopment as “framing [public]  spaces” with a pair of residential-commercial buildings to improve pedestrian connectivity.

“The bones of Merchantville are so interesting to us,” he said. “All of a sudden you’ve entered this small town from the sprawl. How we can take a blighted surface area that’s a triangle and create an active center?”

At the center of the project is the former PNC Bank building, now vacant, but “actually quite a gem,” Shapiro said. He repeatedly returned to the phrase “celebrating that bank building” in describing plans to demolish add-ons to the structure, the better to incorporate its historic architecture. In addition to a trio of green spaces, the redevelopment would construct two, mid-block pedestrian footpaths into a central piazza: one reaching Center Street, and another connecting Chestnut Street and Park Avenue.

Resident concerns chiefly centered on parking needs at the site, but the proposal would exceed state minimums (133 spaces) for a total of 162 parking spaces.

Those would be realized through a combination of tenant garages, the Park Avenue-facing lot at the rear of the Verizon building, and a redistribution of street parking along the three streets bordering the site.

Chestnut Street could switch to angled parking, and Park Avenue could be widened by three feet during construction, adding a curbline of vegetation between the sidewalk and roadway, Shapiro said.

He also expressed doubts that the redevelopment would create an influx of students in the borough, which supports a small, pre-K-to-eighth-grade school.

“I’d be surprised if there were three to five school-aged kids,” Shapiro said. “The demographic this is supporting is young professionals and the 55-and-older set. Those two demographics are the largest demographics in the country right now, and that’s why you’re seeing so much multi-family being constructed.

“A young couple comes here, they fall in love, they get married and have a kid, they move into one of the single-family homes here,” he said. 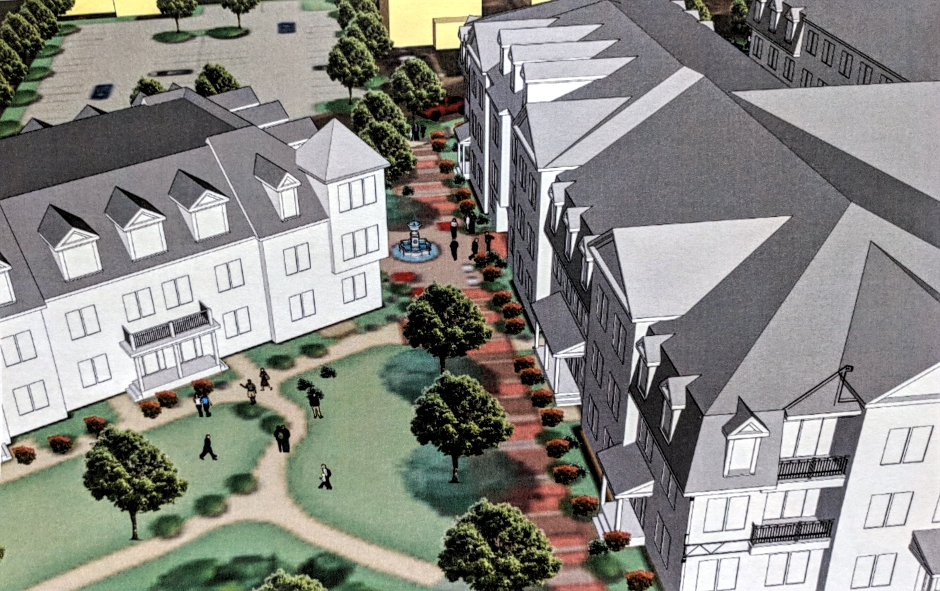 Renderings of the proposed two buildings at the heart of the Merchantville Town Centre project. Credit: Viking Associates.

Similarly, the project would also be subject to statutory planning measures, including traffic impact and environmental studies, the latter of which could be offset by some $48,000 in state aid, Brennan said.

Viking also proposed a PILOT agreement as part of the plan, but the mayor said any consideration of a tax abatement hasn’t been explored by the local government, which owns 90 percent of the property.

Whether any financial incentives would center on an abatement or not, Brennan said that municipal lease agreements could be drafted that would allow the borough to control certain activities at the site, while signing off responsibility for management of the property to the developers.

Those mechanisms specifically would let Merchantville offer concessionaires’ licenses for the sale of food and drink, potentially creating a restaurant space capable of offering alcohol, such as exists in Cooper River Park. Whether such an agreement could benefit a well-regarded local eatery like Park Place, which has a limited seating capacity, is something Brennan said he’s contemplated. 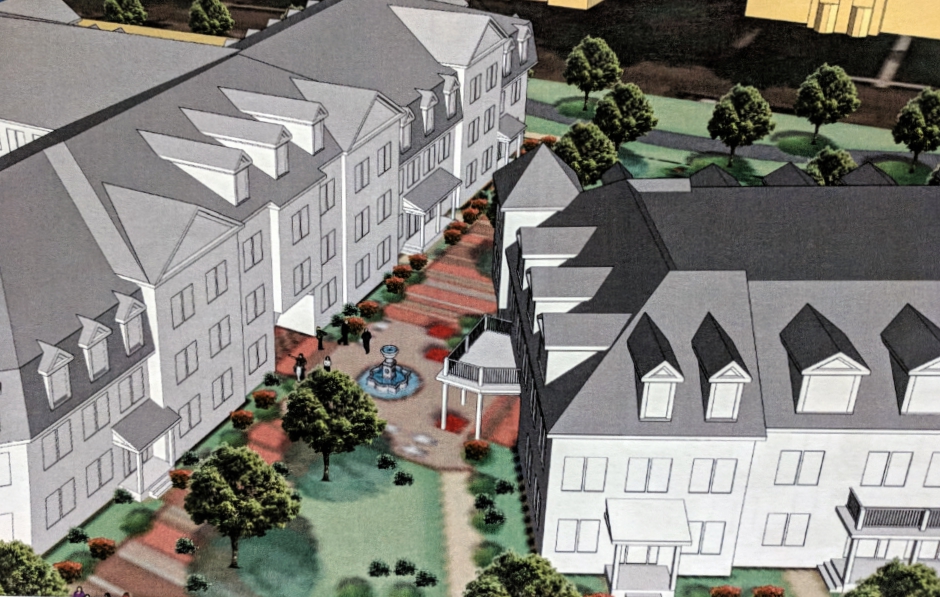 Renderings of the proposed two buildings at the heart of the Merchantville Town Centre project. Credit: Viking Associates.

“Park Place is a gem; to keep them would be ideal,” the mayor said.

“If we can provide for other space in this redevelopment area that would better suit them and allow them to expand, sign me up.

“That combination of unique elements is what’s going to allow for a redevelopment like this to be successful.”

The plan could also potentially displace the fledgling Eclipse Brewing, a nanobrewery that’s found success as the anchor to one point of the triangle in a borough-owned former EMS building. Preliminary plans could involve demolishing that building, or, if a deal can be brokered, relocating its operations into one of the new, proposed retail spaces, or possibly the former PNC Bank.

“When we first brought them into Merchantville, I made it clear that was part of the redevelopment area,” Brennan said. “They’ve been incredibly successful, and I want to keep them in town.

“We have gone to great lengths to try to identify in the proposal space particularly suited for the brewery,” he said. “We took every financial tool that we had to bring [brewer Chris Mattern]in here to start. If there are additional tools that we, the borough, can provide to any retail establishment in the area to ensure that they will be successful, we’ll consider it.” 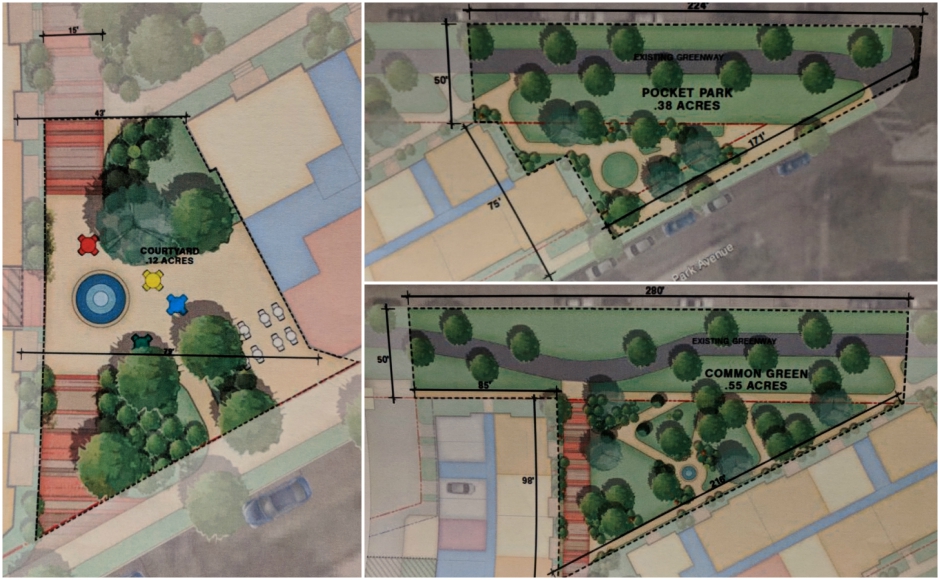 The borough has “a small outstanding obligation” managed under terms of a settlement agreement with Fair Share Housing, Brennan said.

Although other sites in town have been identified for those purposes, Viking has not been considered for any of that work, he said.

Brennan is also optimistic that the redevelopment could include a public transit program to link the borough to local rail and mass transit options. Launched with an $861,000 transportation alternatives program (TAP) grant, a jitney program could loop riders from downtown Merchantville into Derousse Avenue in Pennsauken, and Collingswood.

“I look at that jitney as Phase II if we get this development moving and authorized,” Brennan said. “These are young professionals who are going to want to live here, and we want to provide them an opportunity that is environmentally responsible. So we are working all the way up to the federal level to try to identify those funding sources.”

Moving forward, the project is not on any specific trajectory, the mayor said. Next steps would involve drafting a memorandum of agreement with Viking, which has not been named the official redeveloper of the project.

“While I’d love to see the development occur quickly, I think it’s important that buy-in and commitment from the community is critical to the success of that site,” he said.

“We’ve clearly identified what the borough wants and needs there, and we think that with a bit of a finer pencil, that Viking could be that group, that partner, to really see this through,” Brennan said.

“It’s critical that the community remains involved, that they remain committed to the future of Merchantville,” he said.

“With that level of involvement, we will be able to remove this albatross and really realize the vision for progress in Merchantville as we’ve identified.”