The latest exhibit from the Haddonfield Outdoor Sculpture Trust will greet visitors to town at the Ellis Street circle. It’s the first of four planned installations for the borough in 2019. 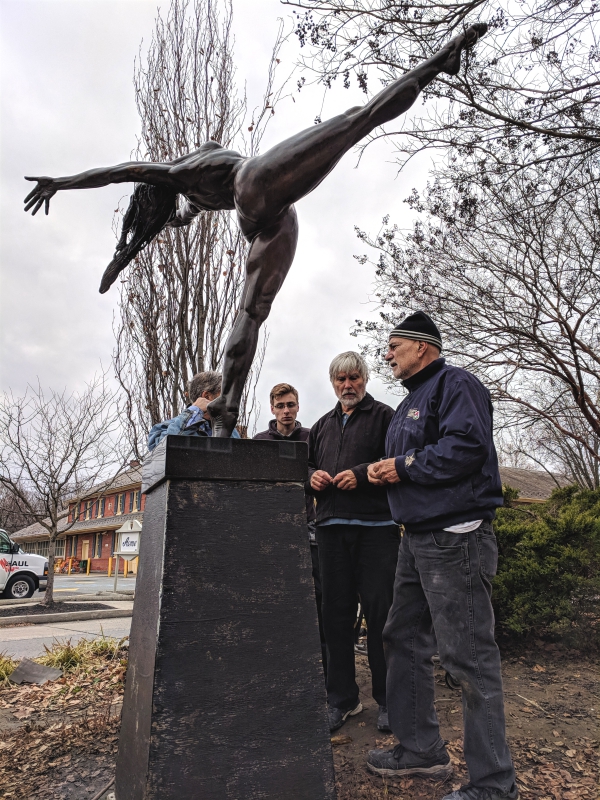 The eastern approach to downtown Haddonfield just got a new gatekeeper: a 30-year old, 220-pound ballerina.

Bronze-cast in Italy, she’s the work of Baltimore sculptor Barry Woods Johnston, who is lending the piece to the borough for the next two years through the Haddonfield Outdoor Sculpture Trust (HOST).

He was flanked by HOST chairman Stuart Harting, fellow sculptor John Giannotti, and Giannotti’s apprentice, Ben Scott, all of Haddonfield.

“Ballerina” is the latest addition to the HOST local collection, which also includes works by Seward Johnson, Joshua Koffman, and Ken Ross.

“I’m really happy,” Johnston said of being invited to display his work in the borough.

“Ballerina” is modeled after English ice dancer Patricia Dodd. The work was cast in Pietrasanta, Italy, “the Saint of Stone”; a Tuscan town in which Michelangelo himself quarried marble in the 1500s.

Johnston worked there for three-and-a-half years in the late 1980s. “Ballerina” was made during a prolific period that he considers to be the height of his career.

“The dollar was so strong at that point that I was able to cast quite a few pieces [there],” he said.

Before the final sculpt, Johnston produced a series of smaller studies of the statue. By the time he was ready to form the work in clay, it took him just three weeks to complete.

“This went fast because it was in my head,” he said. “I already knew what it was going to be before it started.” 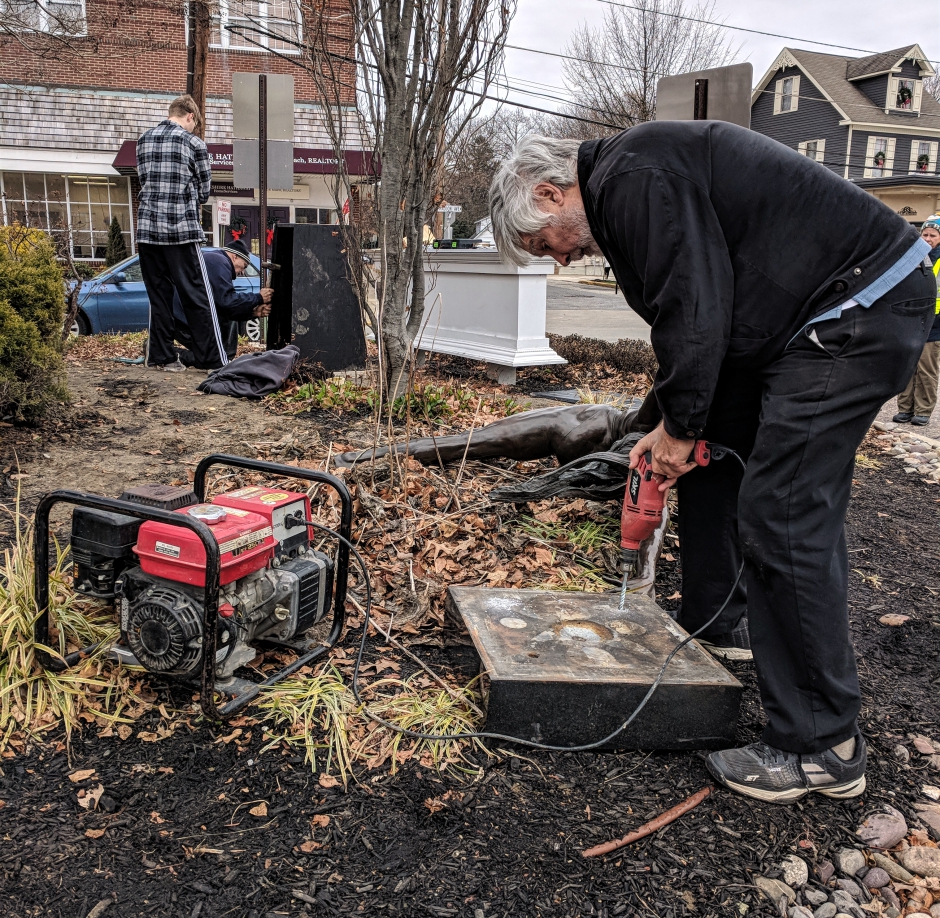 Beautification of the Ellis Street circle has been a semi-annual project for the borough rotary club, said Haddonfield Mayor Neal Rochford.

Rochford, himself a Rotarian, credited HOST with adding visual interest to a town where walkability is a community fixture.

“Stuart [Harting] has brought vitality to the streetscapes,” the mayor said.

“We’re not only a historic town, but a town that incorporates arts and culture,” he said.

“As a walkable town, any interest we can put on our streetscapes is a benefit.”

“It’s a gateway to Haddonfield,” Harting said. “If people can look at the sign and see ‘Welcome to Haddonfield’ with art, it gives them a reason to be here.”

Harting said HOST has planned four additional installations for 2019, including a “sculpture zoo” on Kings Highway, which he described as “a reason for people to bring their children” into town.

One of those additional works will be “My Dog Blue,” a statue of a Husky by Giannotti, whose “Hadrosaurus” is on permanent display in the borough downtown.

It was Giannotti who suggested that “Ballerina” would be a good fit for the Ellis Street gateway. He described the work as “a perfect introduction to the town.

“It has a freedom to it, an openness,” Giannotti said. “When I first saw it on Barry’s website, he has it as a video, traveling in space. It would appear to be doing that as you’re driving around the circle.”

In 2019, HOST continues to await the finalization of plans to situate an artist-in-residence program in a historic carriage house at the former Bancroft parcel. Those deals turn within the much larger wheels of the land use arrangements for that track, which borough officials hope to resolve within the first quarter of the year.